Non-Fungible Tokens: What Are They, How Do They Work?

Non-Fungible Tokens: What Are They, How Do They Work? 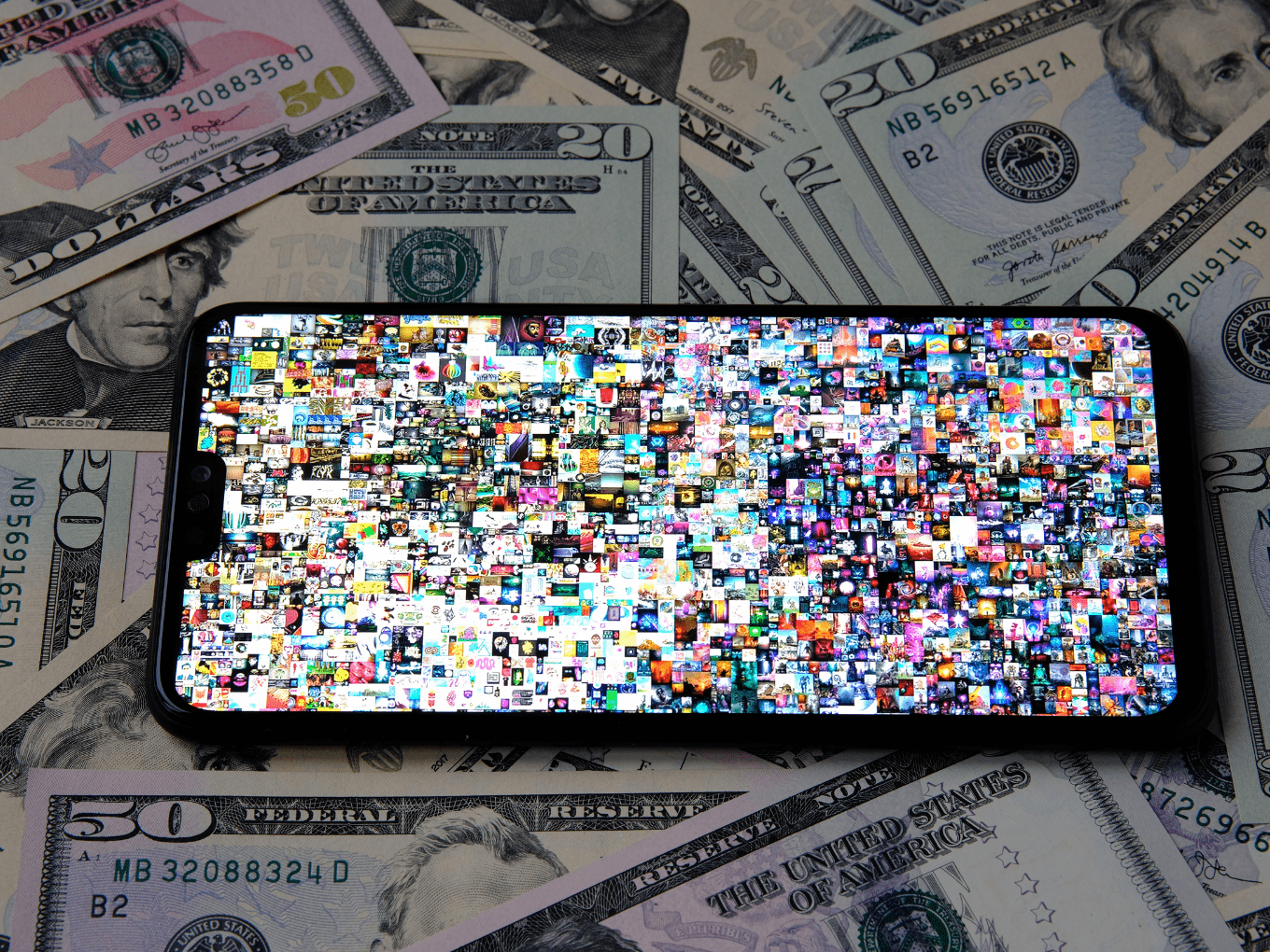 India is jumping on the NFT trend to benefit creators and artists; its future in India looks as bright as the crypto industry’s did

On June 1 2021, WazirX launched its first NFT marketplace and sold NFTs worth more than INR 61 L till June 29

In March this year, a digital artist named Mike Winkelmann aka ‘Beeple’, sold an NFT of his work at the auction house Christie’s for $69 Mn. The digital work of art termed “Everydays – The First 5000” contains a collage of digital artwork Mike posted every day for around 14 years.

Similarly, users are selling their digital art, in-game assets, memes, rare collectibles, or other items through the use of NFTs.

These are items that would otherwise find a market in the physical world, like the first-ever tweet by Twitter founder Jack Dorsey, or the Nyan Cat — an iconic gif of a flying space cat with a pop-tart body emitting rainbow. With the NFT market growing at a rapid pace, knowing NFTs and how they work can prove beneficial, and monetarily rewarding as well.

NFTs are finding their place in the Indian market as well with WazirX being the first to launch their NFT marketplace on June 1. Since then, they have sold over 160 art pieces depicting everything from digital deities to the Indian Olympic medal winners. Till June 29, WazirX has sold NFTs worth more than 61 lakh rupees and has received applications from more than 15,000 collectors and creators to be showcased on the marketplace.

A Brief History Of NFTs

The first use of NFT goes back to 2014 when tech entrepreneur Anil Dash and digital artist Kevin McCoy minted the first NFT named Quantum – a color-changing pixelated octagon. Just three months after the Ethereum blockchain was formed, the first fully-fledged NFT project was launched and demonstrated at DEVCON 1.

The rising popularity of the Ethereum blockchain over conventional token platforms based on bitcoin gave rise to several NFT projects. While projects like Cryptopunks, Colored Coins, and Rare Pepes are fundamental to NFT development, it was the launch of CryptoKitties in October 2017 that brought NFT into the mainstream. Some of these blockchain-based digital cats were sold for over $100,000 triggering a massive growth in the NFT ecosystem.

India is also jumping on the NFT trend to benefit creators and artists. While the WazirX NFT marketplace is already a couple of months old, other startups are also popping up to serve digital artists.

NFTically, which was founded in April 2021, is backed by Polygon (MATIC) CEO Jayanti Kanani is soon going to launch its NFT marketplace. It can also provide users with their own marketplace as SaaS, something which isn’t being done anywhere else in the world. Similarly, other players like Wall.app are emerging with their marketplaces to not only give competition to the established companies but also bring the gas fee to mint an NFT down from $50-$60 to $1-$2 only.

A Canada-based Indian-origin artist, Ishita Banerjee is leading the sale with her NFTs Vishnu, Kali, and Phoenix with each raking upwards of 2.4 lakh rupees each on the WazirX’s NFT marketplace. This paves the way for other digital artists to create and sell their own NFTs not just in the Indian market but globally as well. A leading global NFT marketplace, OpenSea recently listed a short film “Those who watch me dream” by the Indian production house Lekh-Haq.

How NFT Works And What Are Its Uses

An NFT, or a Non-Fungible Token, is a unit of data that is stored on a digital ledger, called blockchain, and is used to represent the ownership of a unique physical or digital asset. These assets can be anything from digital art, songs, trading cards, part of a video, memorable tweets, or even physical items like real estate.

NFTs are creating an internet of assets that aims to replicate the properties of physical domains like proof of ownership, uniqueness, and scarcity into the digital realm. While anyone can get a copy of the art included with an NFT, only the person who bought it can claim to be its owner. They can decide on how scarce the asset can be and make it a rare collectible to hike its value.

Although NFTs function like ordinary cryptographic tokens, they are slightly different from common cryptocurrencies like Ether or Bitcoin. Bitcoins are fungible making them interchangeable. You can exchange one bitcoin to get another bitcoin that has the same value. A piece of art, however, is unique and non-fungible. You can’t trade it for something similar as no two NFTs can be the same.

NFTs are unique and can only have one official owner at a particular time. This information is stored in the token’s metadata and is secured by the Ethereum blockchain so that no one can tamper with the NFT’s ownership. Every token minted has a unique identifier and the owner can be easily verified through the blockchain. The Ethereum network also acts as a platform for peer-to-peer trading of NFTs between creators and buyers.

What Are NFTs Used For

Digital creators have realized the benefits of using NFTs in the digital content realm. With numerous peer-to-peer trading platforms available on the internet, creators are no longer dependent upon platforms or auction houses to sell their art. Ownership is programmed in the art itself and after a successful sale; the funds go directly to the creator’s wallet. Creators can also have royalty programmed into the NFT so that they automatically get a percentage every time the NFT is sold ahead.

Apart from digital content, NFTs are finding use-cases in games, digital collectibles, memes, the music and film industry, fashion, and academia. Major brands, artists, and even celebrities are jumping on the NFT bandwagon. N.B.A partnered with Dapper Labs to create and trade digital highlight clips under the name “NBA Top Shots”, Nike launched a pair of sneakers called Cryptokicks in 2019, 20th Century Fox sold digital posters of Deadpool 2 in 2018, and the musical band Kings of Leon became the first to sell their latest album in the form of NFT. These are a few examples of high-profile sales that are driving the evaluation of NFTs

With the market capitalisation of NFT growing at an expedited pace with sales touching 8 figures and the emergence of various trading marketplaces, you could be tempted to start minting your collection to make money. It could be a profitable decision but the future of NFTs is still uncertain.

The technology is still quite new to fully gauge its profits or drawbacks as the value of any NFT is based on what, and if, someone is willing to pay for it. Most experts think this buying surge to be a bubble and advise investing in it with caution. NFTs have the potential to change the dynamics of the art world and can mean the end for auction galleries, dealers, curators, or other forms of middlemen between an artist and their audience.

The Future of NFTs in India looks as bright as the crypto industry did. Various established crypto companies are either in talks of launching their own NFT marketplace or are partnering with young startups to leverage this exciting domain. Artists and creators in the country have long been plagued by exhibitions, brands, and middlemen to showcase their talent, often paying huge commission fees. With the advent of digital marketplaces, artists are feeling empowered than ever to ‘mint’ and sell their art to a wider audience and pocket a major part of the sale value.