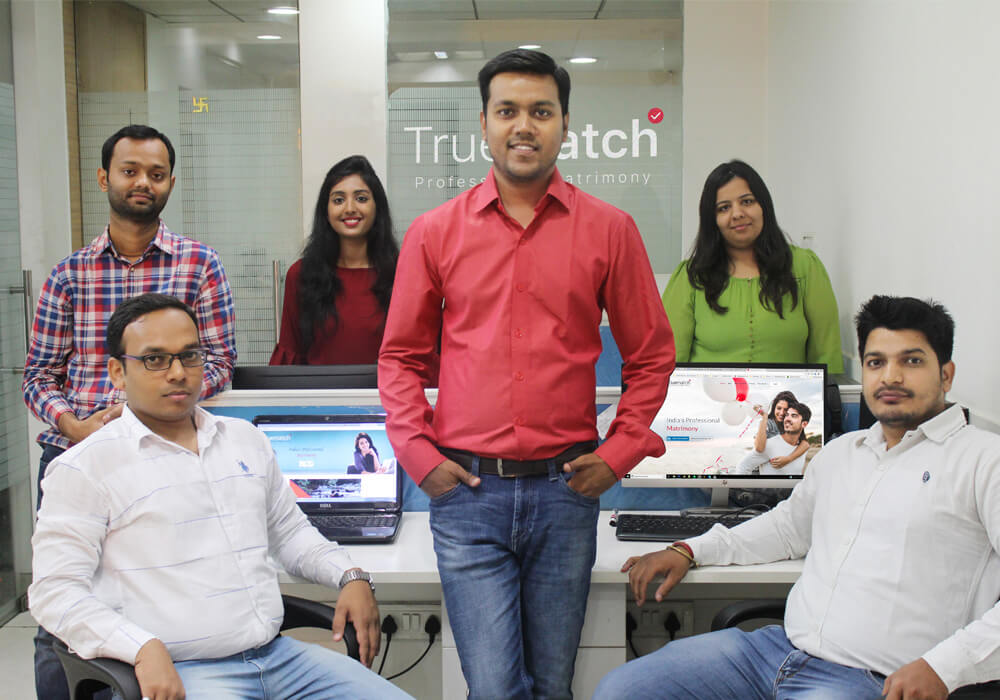 Dating Platform Truematch Seeks To Fill A Digital Gap Between Casual Dating And Serious Matrimony, And Has A First-Mover’s Advantage

In this digital day and age, smartphones and apps are taking over our lives. Name it and there’s an app for it — you want food, Swiggy it; you want your dry cleaned clothes picked up, Dunzo it; you want a car ride, Ola/Uber ride; you want a hookup/love/matrimony get on one of the dozens of dating apps and hope that you meet someone you’re attracted to and both of you fall in love.

But what if one wants marriage, straightaway? Well, until now, people were trying luck on dating platforms and hoping to come across someone they like, who is also looking for marriage. Or were uploading “biodatas” on one of those boring, newspaper-style matrimony sites.

Kumar Akshay, the founder of Truematch, realised the potential of the online dating and the matrimony segment way back in 2015, when he founded his first startup. Being bootstrapped in the face of well-funded startups like Tinder, TrulyMadly, Aisle, in the online dating sector, the startup could not do well in terms of sustenance, but what it did do well was learn the pulse of the market.

Truematch then imbibed that learning to come back with a Professional Matrimony platform where users can use their professional profile to find matches based on their profession, for marriage. The professional matrimony platform, Truematch, is a cross between casual dating and matrimony (read biodata-led matchmaking). This gives the platform a first-mover advantage and an edge among users looking to find suitors for marriage and not casual flings, which is the usual perception of dating apps.

The Platform’s search engine uses Artificial Intelligence to learn user preferences and suggest better results. Artificial Intelligence and Machine Learning have become the soothsayers of the modern-day, they predict the movie you should see next on Netflix, the direction you should take, the hotel you should book, so it is no surprise that AI and ML algorithms are using their predictive skills and matching people seeking marriage basis their own behaviour on the matchmaking platforms.

With the proliferation of dating apps and platforms, today the revenue in the online matchmaking segment amounts to $2,826Mn worldwide, with the highest number of dating app users being in Asia at 24%, among the global regions according to a research report.

Since its soft launch, Truematch has got an encouraging response with more than 10K downloads in 45 days. On an average, the platform sees more than 1500 people engaged across all its three platforms — iOS, Android and website monthly.

Why Do We Need Another Matchmaking Platform?

So, why do prospective brides and grooms need Truematch? Matrimonial sites have been around for a while, haven’t they? Well, millennials hardly relate to these old-style matrimony sites, where grooms — most likely their parents — are still looking for a “ bride based on complexion, height etc.”

The online dating game, on the other hand, is as colourful as real-life dating. There’s a dating app for all kinds of preferences — same sex, opposite gender, location-specific, hate-based, and more. But there’s a catch — dating apps are more of a scouting ground for hookups and casual relationships. Of course, there are exceptions in which people have met their soulmates on Tinder and got hitched.

The wide opportunities and demand have not only brought new, but established players to test this segment. For instance, new and established players all are entering the online match making industry now, recently, social media giant Facebook too announced its plans for an online dating service.

There is no in-between option — a cool dating-cum-matchmaking platform — and that’s the sweet spot which Truematch has picked. “The major learning about the Indian market is that even though there is a good traction for dating apps, they really aren’t for marriage; they’re more casual,” says Akshay.

In India, marriage has never been just about two individuals who meet, date, and plan a marriage. It has traditionally been a social affair that brings together two families (and often the families bring together the couple). But that is changing.

Truematch is formed on the premise that young Indians are now more comfortable than ever in finding their life partners and no longer need the help of the family. Add to that the fact the profession of a potential partner is a key factor when considering a long-term relationship.

“This actually led us to the thought of creating a middle product that is trustworthy as a matrimony site and cool to use as a dating app as well. Thus Truematch was born,’’ emphasises Akshay.

In an industry where compatibility is the foremost factor in driving matches, artificial intelligence plays a key role in understanding each user’s unique profile and web-psychology and then suggesting suitable profiles. Realising AI’s potential in this domain, dating apps and online matchmaking platforms are increasingly using AI and ML to enable those looking to get married find the perfect match.

On Truematch, each user is asked to fill in information about his/her profession, likes, dislikes, and other personality traits, along with his/her photograph. The AI algorithms of Truematch’s matching engine analyse this data and monitor user behaviour — which profiles a user spends time on, swipes through, prefers in terms of age, and profession etc — to throw up the most befitting user profiles that could lead to potential matches.

During these times of data breaches by the biggest and the best social media platforms, data privacy concerns are on the rise the world over. And with no data security laws in place in the country, especially around online dating, users are wary of online interactions and thus it becomes all the more critical for online matchmaking and dating platforms to have security and safety measures as a top priority.

Akshay says Truematch takes its users’ data seriously. “As mentioned in our privacy policy, the user data we collect is not shared with any third party. Also, our application runs on the AWS server solution with extra security for the database, thus ensuring protection from a potential hack attack,’’ explains Akshay. To restrict fake profiles, Truematch screens every user’s details before activation and also plans to implement Aadhaar verification in the next upgrade of the app.

Despite these measures, one of the key challenges Truematch still faces is getting female users on board. Akshay says Truematch is trying to build trust among its female users and using various digital marketing tools to this end. For instance, it shows compelling ads themed around ‘India’s professional matrimony’ on social media platforms popular among women with an aim to establish the seriousness of Truematch and its focus on marriage as its foremost feature. 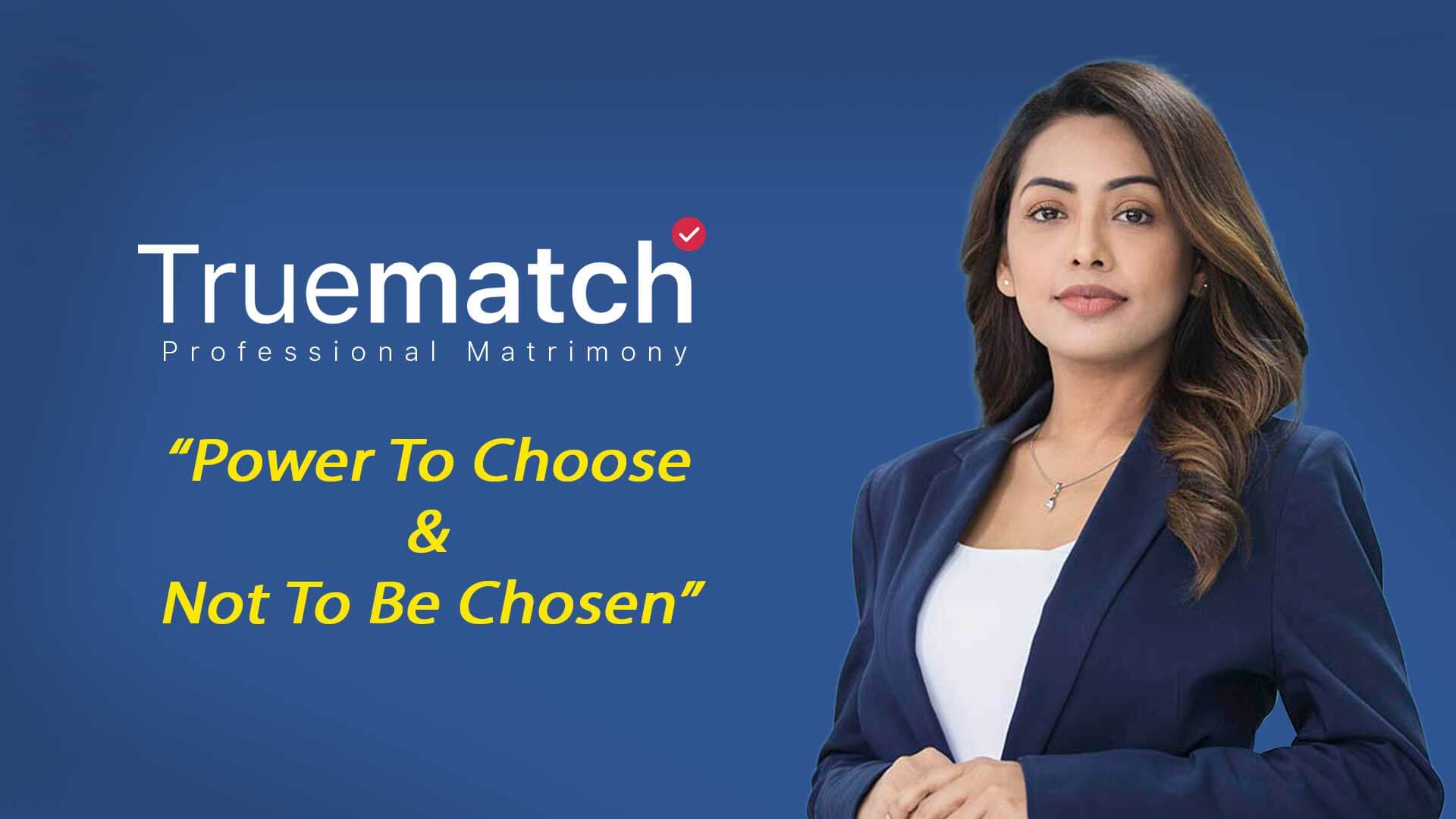 TrueMatch In The Aisles Of Matchmaking Platforms

Truematch, which uses social and digital marketing, has seen a good traction in its short lifespan and has also witnessed interest from outside of the country. Since the platform views itself as a matrimony platform, it plays in the domain of established players like matrimony.com, shaadi.com, etc.

While it has traditional competitors like the aforementioned platforms, or the conventional newspaper ads, in the dating-matrimony game, it has a clear advantage because of the balance it brings between the casual hook-up or very serious marriage propositions, where matches are positioned on the basis of religion, caste, language, etc.

Matchmaking through a medium actually goes way, way back to 1685, when the first ‘personal’ newspaper ad seeking a match for marriage was published. The medium was print, a far cry from today’s online matchmaking platforms, which are real-time, AI-powered, and can be accessed at a click, but the aim was the same — to find the perfect partner, soulmate, someone to share one’s life with.

Online dating too isn’t a very recent phenomenon. It dates as far back as 1965, with the launch of Operation Match, the first computer dating service, in the US. Back then, this was used by 1 Mn users and this at a time when computers were hardly mainstream.

Fast forward to 2018, and the user penetration in online matchmaking is supposed to hit 4.6% by 2022. This goes to show how tech-born love is here to stay. Matchmaking powered by digital and AI seeks to make it a bit easier to find love in these tough times or as Jeff Tarr, the man behind Operation Match, once said: ‘We’re not trying to take the love out of love. We’re just trying to make it more efficient.