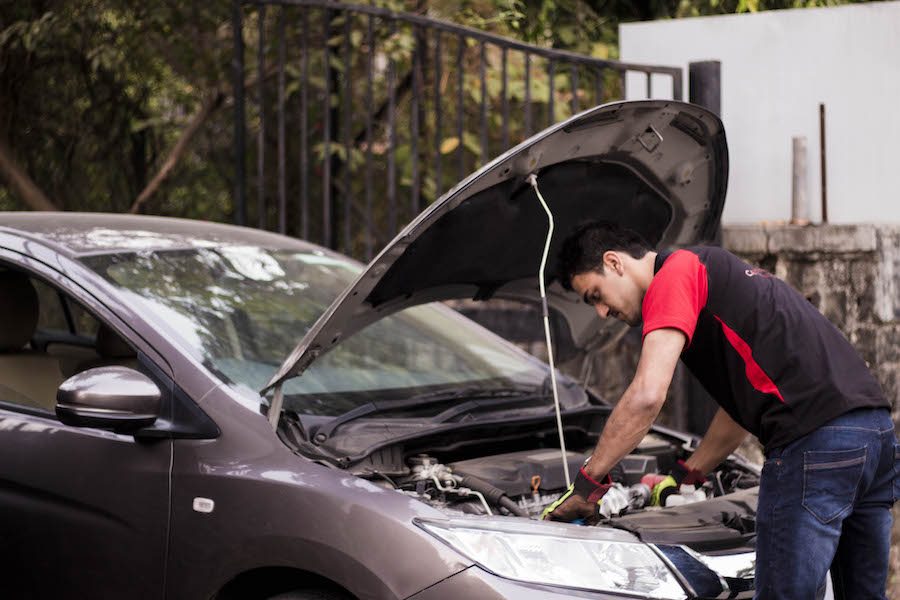 Founded by 4 IITians, Steero is a Mumbai-based after-sales automobile services and products marketplace

India has over 30 Mn cars on the road and the number is growing at an alarming rate of 17% year on year. But car repairing solutions in India are plagued with shortcomings. Waiting in long queues, lack of transparency in services and pricing, discoverability of credible workshops, dearth of skilled and trained technicians are just some of the pain points people keep encountering.

The best thing about the startup boom in India is that it has a solution for almost everything. The aforementioned problem has triggered a host of techpreneurs to simplify and standardise the automobile service sector with tech-based on-demand solutions.

In pursuit of their entrepreneurial journey, four IITians stumbled upon this unaddressed segment.

Swapnil Tripathi, Asad Abrar (both from IIT Kharagpur), Siddarth Jain and Mohd Asad (both from IIT Jodhpur) were interested in the O2O space. Last year, they started working on an idea of launching an ecommerce platform for pre-owned electronics. But the idea was discarded due to lower ticket size and thin profit margins. Next they tried to build a hyperlocal commerce platform. As a result, they collected data on different sectors including healthcare, fashion and automobile. They contacted more than 500 merchants in the process. But the idea was dropped due to feasibility issues. Serendipitously enough, the majority of those merchants included automotive workshops, spare parts and accessories dealers. That is where they understood how big the car servicing problem.

Despite failing on ideas twice, they stuck together as a team. Subsequently, they spent several months on ground talking to several workshops, technicians, dealers, spare parts distributors, customers and other stakeholders across Mumbai. They even worked at some of the manufacturer’s service centres to understand the shop floor procedures. Their extensive research and groundwork led to the formation of Steero, a Mumbai-based after-sales automobile services and products marketplace, in September 2015. Currently, the 25-member strong team is operative in Mumbai and Thane.

With the doorstep approach, Steero aims to avoid the trouble of standing in long queues and untimely services. Steero chooses its technicians through a rigorous selection process. Amongst other criteria, they ensure that a technician possess at least five years of dealer or factory experience. But their most ambitious vision lies in the standardisation of this segment, be it in terms of servicing or pricing, something like what Oyo has done in the hospitality segment.

“By building a branded network of standardised workshops, we are ensuring quality to a customer at the right price point and drive sufficient demand to the workshops, thereby create a winning ecosystem for all the stakeholders,” adds Siddarth.

How does it work

A customer can book a servicing or repairing session using the company’s website or Android app. There are over 150 services to choose from. Once the user provide a time and location, a technician is deployed within two hours. Whereas, for major repairs an expert driver can pick up the car and get it serviced at a nearby Steero Workshop and drop it back. But Steero asserts that 70% of problems that includes periodic maintenance schedules, basic repairs, replacements and inspections can be done right at the doorstep.

The sector is getting a lot of interest because of strong unit economics and large ticket size. Another helpful factor is the sector’s symbiotic relationship with the ever growing automotive and commute industry.

According to an IBEF report, the Indian auto industry, one of the largest in the world, accounts for 7.1% of the country’s GDP. As of FY 2014-15, around 31 per cent of small cars sold globally are manufactured in India. It also mentions that the sector has the potential to generate up to $300 Bn in annual revenue by 2026, create 65 Mn additional jobs and contribute over 12% to India’s GDP.

According to Siddarth, Steero isn’t just building a car service app, but a ‘Car Lifecycle Management Solution’. They want Steero to be a must have app for every car owner in the country, so all their products would be built around this thesis. It backs all their services with a 12-month warranty.

“We already have a Smart Diagnostic Tool in our app. Soon we will be launching India’s smartest OBD solution which will stream real time data of a car’s health, predict failures and suggest driving patterns for efficiency,” says Siddarth.

Having a network of mobile technicians, Steero tends to avoid overhead costs like workshops. Thus, for most services they claim to offer savings up to 30% as compared to dealer service centres.

Siddarth points out another interesting aspect. “With the Doorstep approach, we are bringing uniqueness to fulfill the needs of not only an Indian vehicle owner but also a skilled technician who even with 10 years of experience makes only INR 10-12K/month. The opportunity to own a mobile workshop, make a much better living and earn dignity will ensure quality supply on our platform and would see a similar stir as Ola and Uber have created for cab drivers.

The startup is bootstrapped as of now. Siddarth attributes their rapid scaling to a capital efficient approach and the sustainable doorstep model. Although, they are in advanced talks with a few VCs.

The startup’s core focus is on doorstep service, where it make margins on spare parts (in the range of 15-40%) and pay the labour charges to technicians. For workshop orders, it charges a commission of about 10% on service labour and spare parts. The average ticket size for minor repairs is INR 4-5K, and for major repairs it is INR 10-15K

The company claims to have served over 1000 cars till now, while developing strong operational expertise. It counts several Ola and Uber drivers as some of its loyal customers. Alongside, it has bagged maintenance and repair contract for over 500 cars from several business fleets, including that of Zoomcar, Justride and CityFlo. While the Android app already has around 1000 downloads, the iOS app will be launched in the next two months.

Currently claiming to serve around 10 orders per day, the company is reportedly witnessing a 100% month on month growth.

The company has tied up with a Beijing-based on-demand car repair startup called Kalading as ‘Knowledge Sharing Partner’. It would involve collaborating on technical fronts and sharing best practices. It is also looking to become the first supplier (outside China) of a 2.5 PM Filter which is an intellectual property of Kalading and has demonstrated high efficiency in cars in high pollution regions.

The startup will soon launch a ‘Sale’ feature, to allow  customers to be able to buy auto parts and accessories. Apart from that, Steero has an interesting app-based video streaming feature in the pipeline. Through the app, a customer will be able to see what is being done to their car both at the doorstep as well workshop facilities.

In terms of expansion, the company is eyeing Pune and Delhi as its next targets.

Tuhu, Ebaoyang, Yangche Diandian, Kalading and Mocar are some of the Chinese startups that have explored the on-demand automobile repairing segment and are doing considerably well. They have successfully carved a niche for themselves. Taking a cue from these enterprises, Steero is putting an earnest effort to streamline and standardise this segment in India. It will face stiff competition from direct competitors like Cartisan, Bumper, Droom, Carzippi and indirect competitors like MeriCar. But then, the playing field is huge and mostly untapped. So, let’s see if Steero can play its cards well.