According to Musk, legacy and larger car manufacturers make their profits by selling replacement parts to their fleet, “of which 70% to 80% are past warranty”.

“You said it, @elonmusk. And we've been doing that for decades now. Still sweating and slaving away at it”, Mahindra reacted to Musk’s tweet. 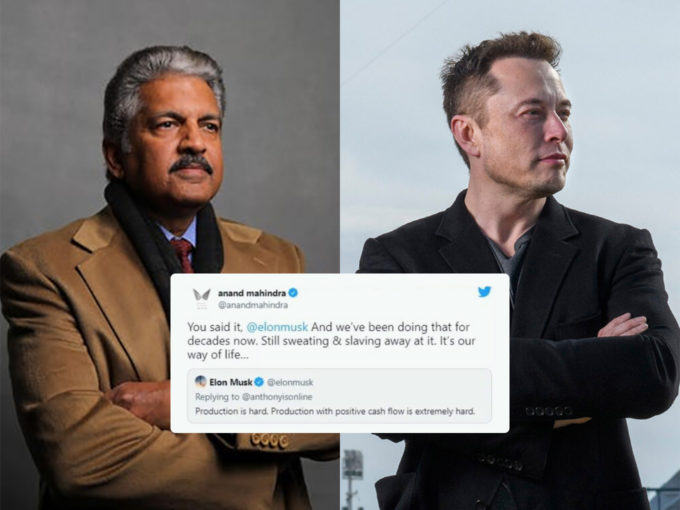 The automotive industry is going through a rough patch amid global chip shortage and rising costs of production and now, Tesla CEO Elon Musk and Mahindra Group Chairman Anand Mahindra have openly admitted how difficult it is for them to produce vehicles and generate positive cash flow.

As Tesla inches closer to make its foray into the Indian market, Musk took to Twitter to lament that motor vehicle production is a “difficult job” and that generating positive cash flow is even tougher. Mahindra responded to his tweet, agreeing with him.

Musk shared a passage from James Dyson’s new book about his company’s failed attempt at making an electric car, and tweeted: “Production is hard. Production with positive cash flow is extremely hard”.

Mahindra was quick to give his opinions on the topic. “You said it, @elonmusk. And we’ve been doing that for decades now. Still sweating and slaving away at it”, reacting to Musk’s tweet.

According to Musk, legacy and larger car manufacturers make their profits by selling replacement parts to their fleet, “of which 70% to 80% are past warranty”. Additionally, he stated that these car manufacturers also sell their cars at low rates to meet profitability margins.

However, given the largest costs incurred during the production of EVs, these are not feasible options for Tesla or any other electric vehicle manufacturer. For instance, in the excerpt from his new book that Musk tweeted, Dyson had shared the many twists and turns that went into his company’s ultimately failed attempt at bringing the high-end N526 EV to market.

That being said, Tesla is slowly inching closer to its entry into the Indian markets.  Approximately a week back, according to a posting on the website of the Ministry of Road, Transport and Highways (MoRTH), four models of Tesla had received homologation certificates. This meant that the Tesla vehicles had been certified as being roadworthy in India and could be manufactured or imported by the company.

However, similar to what Musk said, India is one of the toughest countries to carry out the car manufacturing business as consumers tend to spend relatively lower amounts on vehicles. This is an even bigger problem for foreign players such as Tesla.

For instance, the most affordable Tesla is the 2017 Model 3 with a $39,990 (around INR 30 L) price tag. With import duties, it would become unaffordable in the Indian market with an expected price tag of around INR 60 L. The government may consider lowering import duty along with offering other SOPs to Tesla but for that, the EV major would have to invest in setting up a manufacturing facility in the country.

Currently, India levies 100% tax on imported cars of price more than $40,000 (about Rs 30 Lakh) inclusive of insurance and shipping expenses, and cars less than $40,000 are subject to 60% import tax. Tesla has previously urged the Indian government to lower the import tax on EVs to 40% from 100%.

The company also intends to open retail outlets in multiple cities as the major electric vehicle (EV) automaker is in talks with the government for the same. It is reportedly in discussions with the government regarding the norms and regulations required for the US-based company to set up retail outlets in the country, as it will have to comply with the foreign direct investment (FDI) along with the local sourcing norms.