“Creativity is the key to success in the future, and primary education is where teachers can bring creativity in children at that level.” These words from India’s ex-President A. P. J. Abdul Kalam may seem overly virtuous but, unfortunately, our current education system seems bent on going in the opposite direction. However, the three co-founders of Bengaluru-based, DIY robotics startup QtPi, are on a mission to teach children ‘how to think’ and not ‘what to think’.

“Today’s kids are in consumer mode. They have so many mobile apps and gadgets around them that we are never able to let them into the love of creating things. They have a really short attention span and it requires more effort to get them involved in using their own imagination to create things. Unfortunately, our education system also does not encourage these kinds of activities and more emphasis is laid on finishing the syllabus and imparting theoretical knowledge rather than giving the practical nuances,” said QtPi co-founder, Jasion Leon.

With the world swiftly moving towards automation, it is imperative to make the future generation ready with the skills required at the forefront of the fourth industrial revolution. Thus, the QtPi founders are aiming to make them solve real problems and become entrepreneurs, rather than learning programming languages to find a job.

QtPi (pronounced as cutie pie, a term of endearment) was launched officially in November 2016 by the cousin brother duo of Anto Jerlin and Jaison Leon, along with Raghunath Are. Both Jaison and Raghunath are ex-veterans of Yahoo and Microsoft. The founders’ interest in areas such as AI, IoT, STEM (Science, Technology, Engineering and Mathematics) education and design and data analytics skills led them to build the foundation for QtPi.

Within a few months of being launched, the startup stands as a frontrunner amidst various homegrown as well as international players in the DIY robotics space. This includes names such as Lego, MakeBlock, Sphero, Bibox Tern, Electron Blocks, Electro Bricks, Titanbots and more.

QtPi was recently selected in the first cohort of DesignGild, a Pune-based, design-led accelerator, for a six-month intensive programme. It was also part of Innofest (now InnoNation) 2016 which actually ended up with QtPi registering as a private company.

Jaison described his experience with Innofest thus. “As a bootstrapped company, we did not have any marketing budget. InnoNation blessed us with a free stall to showcase our product. The rousing recognition we got from the InnoNation organisers, media and visitors motivated us to register QtPi as private limited. This event also helped us to sign some schools, good interns and our co-founder Raghunath Babu Are decided to quit Microsoft and joined us full-time. The ripple effect is still paying out. InnoNation genuinely identifies hardware innovations and offers much-needed visibility and support.”

As shared by Jaison, they essentially began ideating the concept of QtPi three years back, before launching officially. The initial idea was to build a robotics training module for children wherein they were instructed on how to build robots.

“However, we soon found our experiment failing as we were unable to gain their attention. We failed to lure kids from the fun of watching content or playing games on mobile apps. We felt we were in the shoes of the typical, conventional parents. We were trying to teach them in a way parents do, instructing them at every point, what to do and what not to do,” he added.

Thus, they decided to follow a top to bottom approach and build everything from scratch, keeping only their target audience in mind. They began developing their own modules, technology, and app over the existing standardised interfaces available. And the ultimate focus was laid on identifying the interest areas of children in the age group of 6-17 years.

“We learned that there will always have to be one basic laner for experiments. We have to delve into the complexities steadily while making them enjoy the process. This is the only way you can engage them and motivate them to create and innovate,” emphasised Anto.

With further research, they were able to figure out the attraction that their target audience had towards Arctica Cards (cards showing visual graphics of animals, buildings, etc.).

“So, from there, we got the idea that instead of giving them the complete robot, why not give them broken pieces and let them build what they want and programme in their own manner,” added Jaison.

The QtPi founders initially explored the products of the US-based company Lego which provide toy-building bricks along with a step-by-step instruction manual on how to build. QtPi, on the other hand, decided to provide just the basics to the children and let them build any kind of Arctica that they want. “So, for the similar building blocks, one kid can build an Arctica Car, while another kid can come up with an Arctica Transformer.”

The QtPi robotic kit consists of an Arduino-based main board, sensors, actuators, building blocks and a mobile app. For the neophytes, Arduino is a kind of drag-and-drop programming interface, an open-source electronic prototyping platform enabling users to create interactive electronic objects. The kit supports multiple drag-and-drop programming interfaces such as Scratch & Snap4Arduino. Support for the MIT App Inventor 2 is also in the pipeline.

Furthermore, the QtPi kit is built on the DESII model, which stands for Design Electronics Software Integrated Innovation. Once a child gets admitted to a QtPi experience zone or a QtPi robotics club, he goes through these four learning stages, leapfrogging ahead on the sole basis of his interest.

For instance, those between 6-8 years will be more interested in just ‘designing’ the robots and creating new things with the building blocks. They gradually progress towards the electronics part, where they learn the basics of electronic sensors and actuators, further becoming pros in creating their own IoT-enabled circuit boards over the QtPi motherboard. “Usually kids in the age group of 9-10 get curious about this level of understanding,” said Jaison. 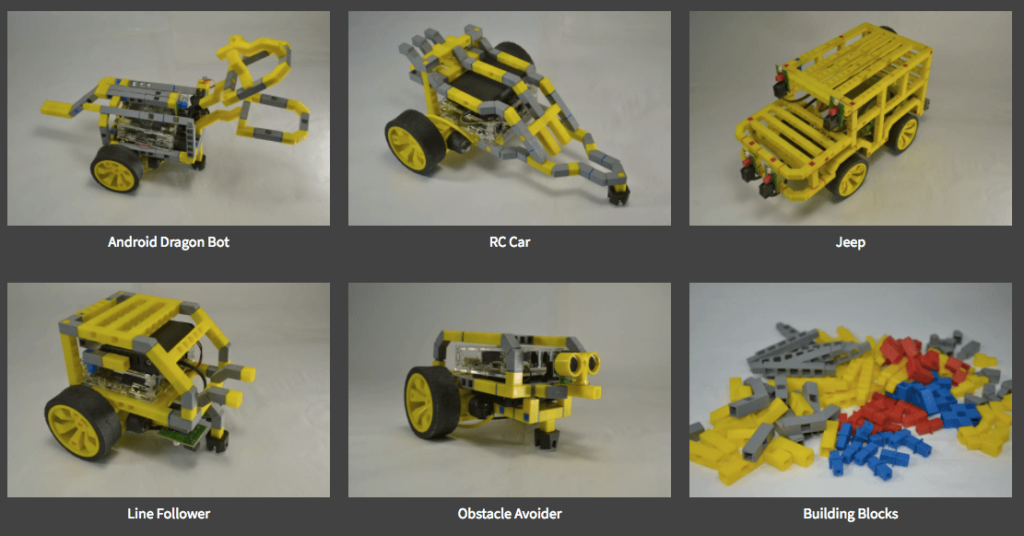 The users are then gradually pushed towards the more technical and complex levels of robotics programming. Here they learn popular languages like Scratch, Processing or Python as well as learn some home and industry automation.

The last leg of the QtPi DIY learning model introduces them to experts and makes them learn integrating physical objects with software and build a new product.

“One thing what humans have is, opportunity. It is not what any other species is good at. And we believe that future generations will be talented and it’s very important for us to help them learn how to find opportunities, rather them making them learn the age-old concepts without any practical aspects. DESII introduces multidisciplinary skills to children and they are encouraged to come up with their own problem statements and work as a team to solve it. At the QtPi Robotics Club, they learn the tools and get an opportunity to apply their problem-solving skills. Essentially, the qualities any entrepreneur needs in his journey to create an established and sustainable venture.”

QTPI currently runs monthly batches on a weekly and weekday basis for a fee of INR 1,400 and INR 1,200, respectively. It also runs evening batches and hosts summer camps in various schools. Currently, the company is running robotics clubs in various schools in Bengaluru and nearby areas such as The Deen’s Academy, Ryan International school, Excel Global School and BMC School.

“Talks with a few more schools are in advanced stages. We have also signed up with culture.place to run QtPi Club in Bengaluru JustBooks branches. These early tractions implies good demand for a quality STEM offering in India,” said Anto.

Also, they offer professional consulting to companies in product development. The team also runs robotics and IoT workshops in colleges. Corporate team-building events with robotics which excites techies and non-techies alike is another unique offering from QtPi.

As Jason shared, instead of chasing professional investors to support their experiments, they chose to DIY too, i.e. bootstrap with affordable team players and focus on the product. They raised some funds from friends and family later to keep the team afloat. As they have a minimum viable product and early customer traction, they are exploring professional funding options to strengthen their R&D and accelerate growth.

In the near future, the QtPi founders are planning to launch a crowdfunding campaign in order to create a community around their products and offerings. “We are a team of 15 full-time employees. DesignGild mentors and supports us in product and communication design. A handful of design interns from MIT-ID helped us in building a great product. We also work with freelancers (mostly professional college students)  to run the QtPi Clubs. Our robotics clubs have started booking reasonable revenue from April 2017. We also see some traction in professional consulting,” said Jaison.

The proliferation of PC, Internet and mobile increased the number of white-collar jobs in India. Similarly, cloud, AI and robotics will bring home a new set of opportunities for companies with hardware and software turnkey solution capabilities.

While globally, companies are busy identifying several use cases for these technologies in different industries, at the same time, it is also necessary to impart these basic skills at a primary level. Our future generations need to be ready with a skill set of the 21st century in order to survive, which includes creative thinking and DIY skills. As per a January 2016 report, globally technology can kill 5 Mn jobs by 2020. In fact, by 2021, one in four job cuts may be from India, as per a human resources (HR) solutions firm PeopleStrong report. Thus, building skills at the ground level will become imperative in times to come.

In such times, it is absolutely necessary to inculcate the seeds of creativity in them at the early stage itself.

With PM Modi’s Make In India movement on the rise, several new doors of opportunities have been opened for the Indian hardware startups. But the road is still uphill for these entities. As Jaison aptly concludes,

“Hardware iterations are perceived as more expensive than software iterations and less rewarding. But, 3D printers have significantly reduced the cost of building DIY hardware-dependant products. We also see electronics design and prototyping services becoming affordable. The Indian hardware ecosystem slightly lags behind the software ecosystem in terms of efficiency and turnaround time, but we are hopeful that the IoT and IIoT (Industrial Internet of Things) buzz will improve the situation.”