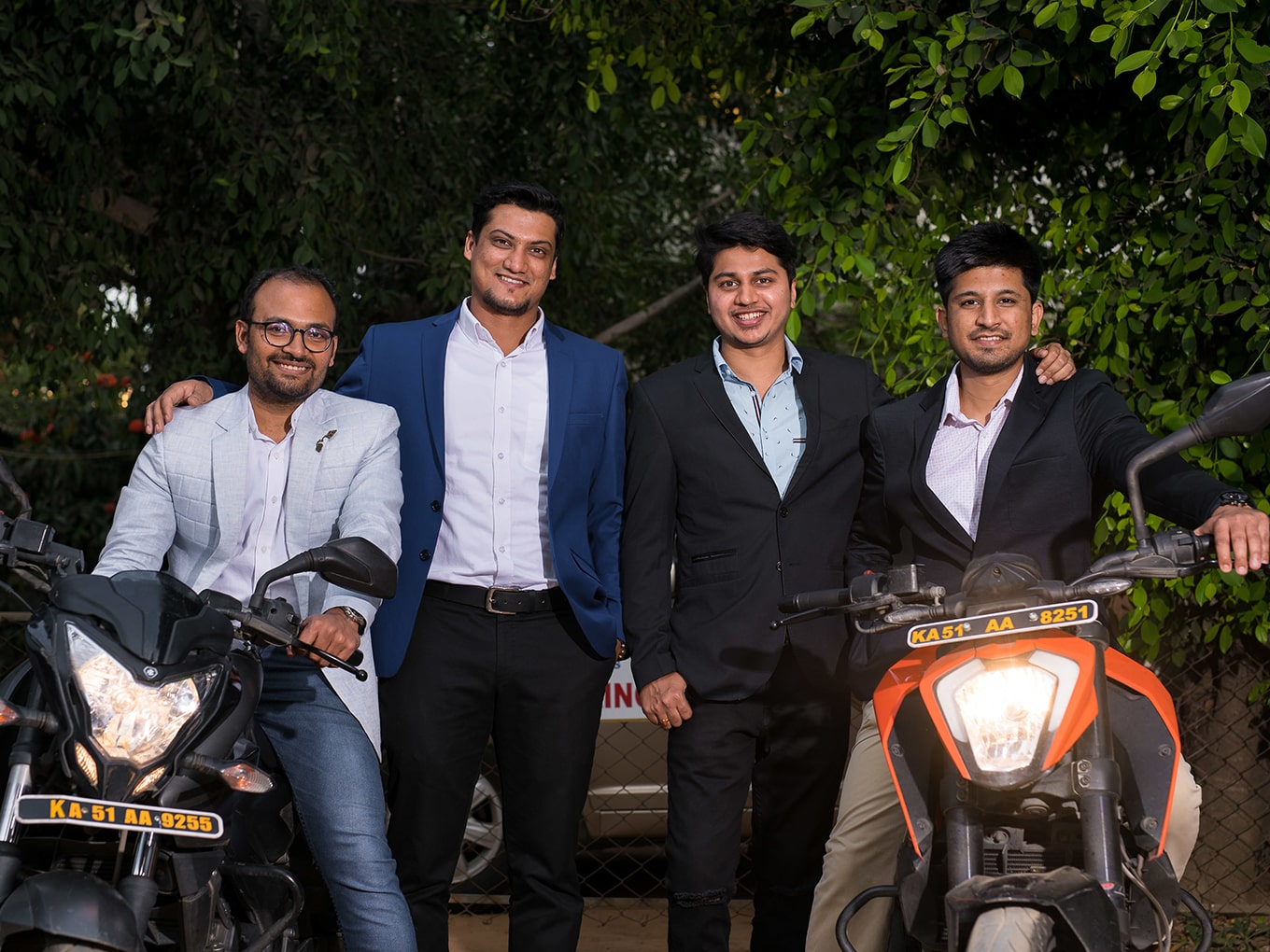 It is currently in the process of raising Series A funding

ONN Bikes is looking to add another 4,000 bikes as part of its expansion plans

Mornings in Indian metros are chaotic to the point of being painful. Everyone is trying to get somewhere, and everyone is in a hurry.

It doesn’t help that most Indian cities are unplanned with narrow, potholed roads (which too are riddled with encroachments), ever-increasing wheels on the street, and burgeoning populations. Highway expansion, extension of metro lines and flyovers are doing little to help the situation.

Arterial roads are choked with traffic, public transportation is overcrowded and unreliable, and parking is at a premium. There’s Ola and Uber for those looking for hired rides, but cabs have painfully long wait times or are unavailable. Plus surge pricing hikes up fares astronomically, making cabs unaffordable for many.

Enter bike rentals. Riding bikes to get around the city — making for quicker, hassle-free commutes and exercise on the side — has picked up in India in the last few years. And in the sharing economy it is but natural to get everything on hire.

“Cabs fare has increased a lot and availability is a challenge. So, people have started renting bikes as an alternate mode of transportation,” says the founder of ONN Bikes, Namit Jain, adding, “The cost of our self-driving bikes are 70% lower than that of cab rides.”

The startup currently offers bike rental plans at a reasonable INR 8 per hour for 100cc bikes. Its daily, weekly, and monthly packages start from INR 175, INR 799, and INR 2,899, respectively. The prices differ as per brands and models and the minimum duration for which you can rent a bike is one hour.

It recently carried out a pilot in Bengaluru for Dockless Smart Bikes to enable commuters to drop bikes at any parking hub in the city.

The platform, at present, offers its services across six cities — Jaipur, Udaipur, Bengaluru, Hyderabad, Delhi-NCR, and Mysore. Jain tells Inc42 that ONN Bikes plans to expand its operations to Pune, Kochi, Ahmedabad, Himachal Pradesh, and Vizag by the end of 2018. It is also looking to foray into 85 new locations — mostly tourist hubs — across India by 2022. 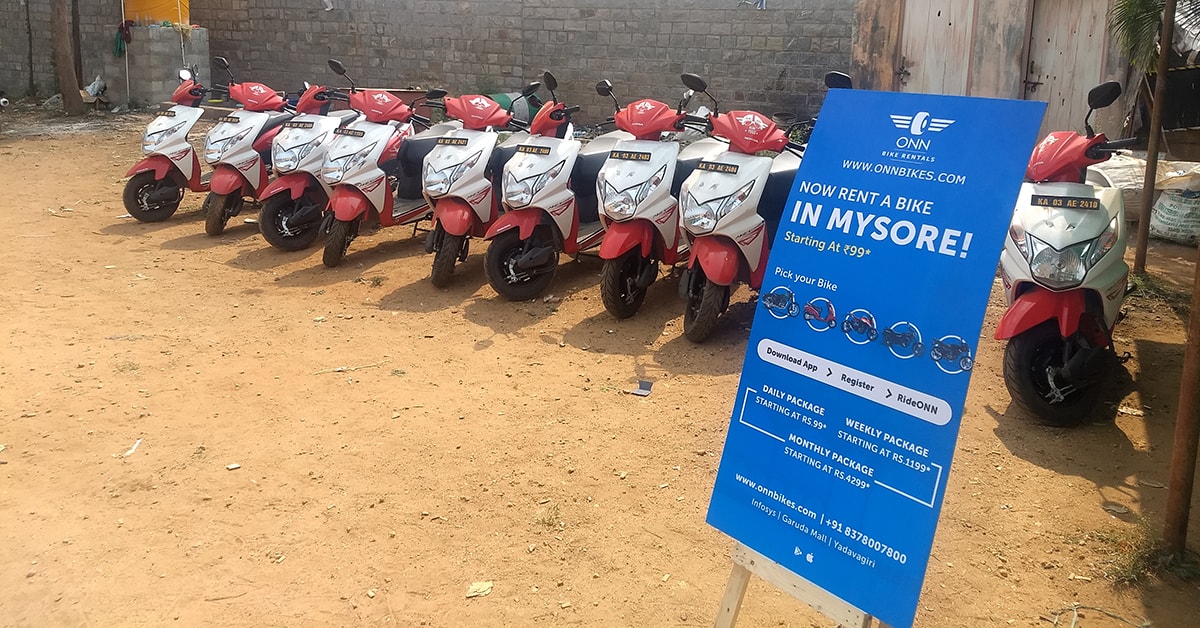 Interestingly, ONN Bikes doesn’t own a single bike. Instead, it leases bikes and provides them to the end-users, similar to the cab aggregation model. It makes money from commissions. “We are not an asset party. We have a certain set of investors who lease us these bikes on our platform and we connect to the users to them,” says Jain.

The startup claimed to have on-boarded 3,000 bikes, including scooters and motorbikes, on its platform from brands such as Honda, Bajaj, Yamaha, Royal Enfield, KTM Duke, etc. The bikes have engines ranging from 100cc to 400cc. It is looking to add another 4,000 bikes as part of its expansion plans.

It also offers renting solutions for businesses that are into last-mile deliveries such as online marketplaces Amazon and Flipkart, cab aggregators Ola and Uber, and food delivery startup Swiggy, among others.

A commuter using the ONN Bikes platform can pick up a bike from any of the parking hubs located across metros, colleges, hospitals, and hotels in select cities.

After the ride or rental period is over, he/she has deposit the bike at the same parking hub where the ride/rental started. The startup has recently completed a pilot project in Bengaluru for Dockless Smart Bikes, which enables commuters to deposit bikes at any of the parking hubs (not necessarily the one where the ride started) across the city. Bengaluru has 700 at present, Jain said.

The new model will implement Rapid Stain Identification Series (RSID) technology, which automatically locks the bike once the user keeps the helmet back on the bike’s handlebar or mirror, using the D-lock on the helmet buckle. The app tells the user if the helmet has been kept properly or if the bike steering needs to be tilted to end the ride.

According to Jain, the dockless scooter trend is popular in countries such as the US and China where the commuter can start the ride from any parking hub by scanning a QR code and drop it at any parking hub; riders are charged according to the distance travelled, as it plans to roll out the dockless service by August in Bengaluru.

The Dockless Smart Bikes project will use improved technology including geo-location and geo-tagging, along with immobilisation of bikes to check the risk of theft.

We Are ONN Bikes, And We Are Many

The ONN Bikes founder says they were inspired to launch the startup after they noticed that bike renting works very well in Goa. “We thought, why not take it to other cities.” So, Jain, along with Shanky Munoth, Akashdeep Singal and Kunal Gupta, started ONN Bikes in 2017. The 18-month-old startup has grown quickly, adding 150 employees along the way and rakes in about 5,000 monthly bike rentals on an average, says Jain.

The startup has raised three rounds of funding so far — $219K (INR 1.5 Cr) equity funding and $439K (INR 3 Cr) asset funding from investors such as early-stage accelerator Z Nation Labs and JITO Angel Network, among others. It recorded a total revenue of $2.6 Mn (INR 18 Cr) till March 2018 and $1 Mn (INR 7.1 Cr) the previous year. The startup is currently in the process of raising Series A funding and plans to close the funding by August, says Jain. 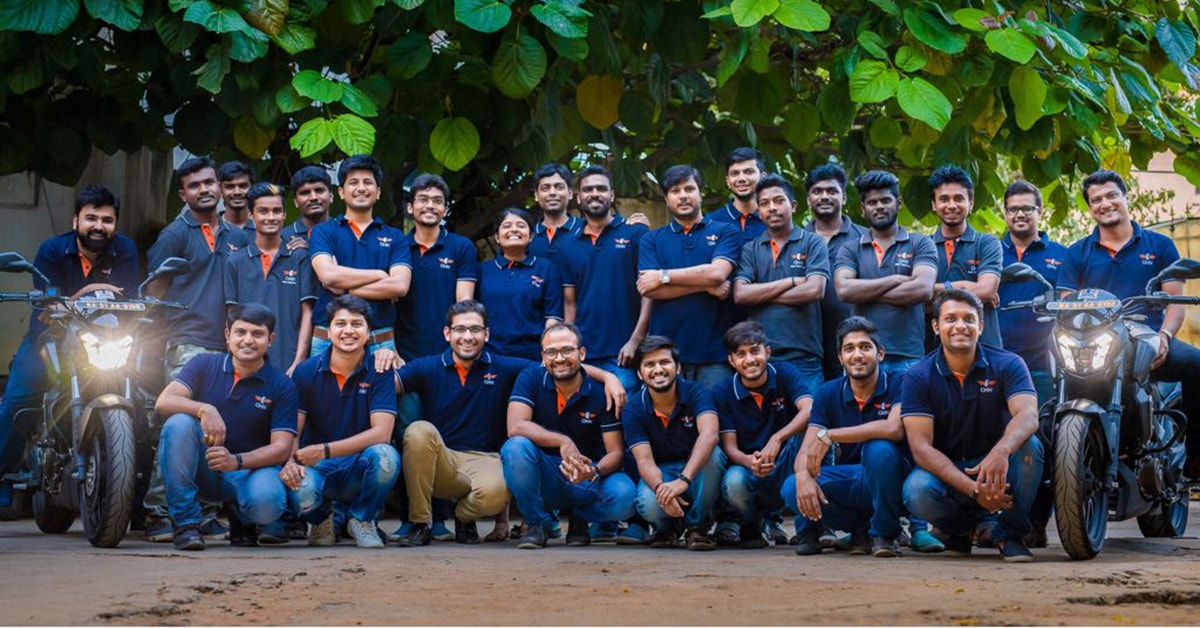 As demand for bike rentals surges across cities, startups such as ONN Bikes have been rapidly gaining popularity. ONN Bikes considers Ola-backed Vogo and Metro Bikes as its main competitors. Vogo currently operates in Bengaluru, Hyderabad, Manipal, and Mysore. The startup, which too offers dockless bikes, claims to clock more than 5,000 orders per month, similar to ONN. It has also added electric scooters to its fleet of scooters, bikes, and motorbikes.

On the other hand, Bengaluru-based Metrobikes offers around 65 to 100 bikes at 36 out of 42 metro stations across Bengaluru. Its charges are even lower than ONN Bikes — INR 5 per km and INR 0.5 per minute including fuel charges. Riders can book bikes on their app or walk in and book them at one of the 40 touchpoints across the city. The bikes are keyless and work on OTP-based access.

A RedSeer Consulting report suggests the Indian online mobility market has witnessed substantial growth. It contributed over 15% of the industry’s overall gross book value (GBV) in 2017. According to Statista, India’s two-wheeler vehicles (scooters, motorcycles, and mopeds) saw 20 Mn sales to domestic customers in 2017-18, making it the most popular vehicle category sold in India.

According to Jain, in Bengaluru alone, there is scope for deployment of more than 20K bikes for rentals. Cumulatively, rental companies operate around 3,000 bikes in the city at present.

“The demand is very high. The only challenge is the supply of bikes. We are not able to secure bikes as per the demand,” he says.

That shouldn’t be a difficult problem to solve. However, most bike rental platforms in India operate petrol-and diesel-fueled bikes and scooters, which are not really in line with the Indian government’s ambitious plan to roll out 30% electric-charged vehicles by 2030. The Centre wants to reduce carbon emissions of its gross domestic product (GDP) by 33-35% by 2030.

These are the initial days for bike rental startups such as ONN Bikes. While looking to ease intracity travel for commuters in busy metros, these startups should also explore ways to incorporate ecologically friendly e-bikes on their platforms so that they can race ahead in the game of electric vehicles as well.