Inside D2C Flip-Flop Brand Solethreads’ Journey To Make Its Mark In A $1.2 Bn Market

Inside D2C Flip-Flop Brand Solethreads’ Journey To Make Its Mark In A $1.2 Bn Market 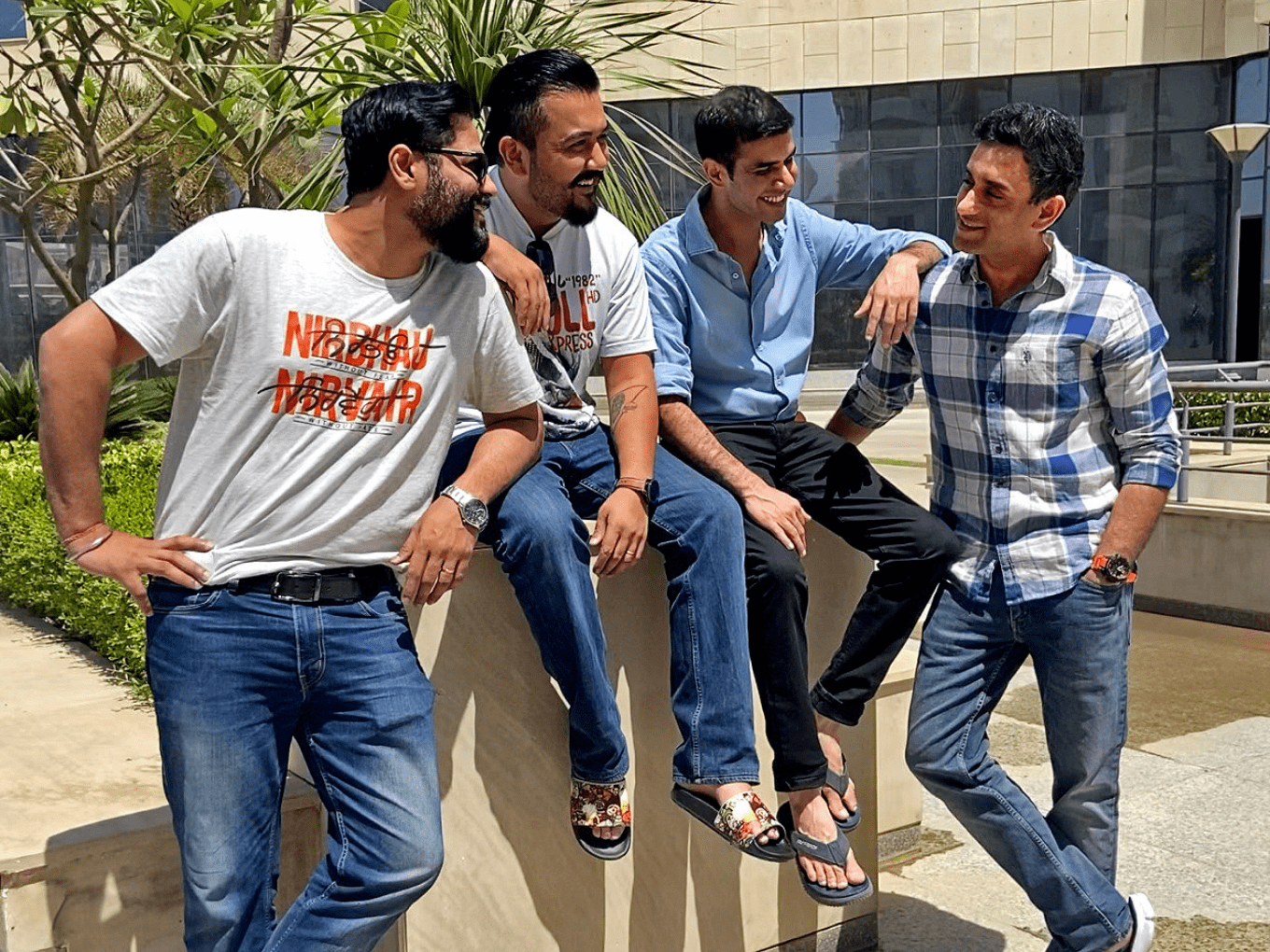 Globally, India is second in flip-flop volume play, but the largely unorganised market is ripe for ‘affordable’ innovation

Solethreads, a Delhi-based D2C startup with more than seven patented concepts, produces flip-flops that focus on comfort and functionality

To optimise its processes, the startup has partnered with various D2C enablers such as MoEngage, Pickrr, Unicommerce and ClickPost

The perennial flip-flops or slip-on sandals, popularly known as hawai chappals in most Indian households, have been here for a very long time. The earliest version might be five-millennium old and originated in ancient Egypt.

In India, the ubiquitous white-and-blue variant was popularised by the legacy brand Paragon in 1975. Its down-to-earth ad slogan — Mehnati logo ki mehnati chappal (durable flip-flops for hardworking people) — resonated with consumers during those days.

Due to their comfort factor, durability and affordability flip-flop easily carved a niche in the open footwear segment. And sensing their mass-market appeal, both Indian and global players such as Bata, Liberty, Nike and Adidas stepped into the segment.

Gaurav Chopra, an IIM-Tiruchirappalli alumnus, was in the thick of these developments for more than a decade, designing footwear for major brands like Bata’s Hush Puppies, Puma and the United Colors of Benetton.

So, it was hardly a surprise when he teamed up with Sumant Kakaria, Vikram Iyer and Aprajit Kathuria to launch a new flip-flop brand called Solethreads in November 2018 and started exploring the innovation potential to smarten up the humble sandals.

There was yet another trigger that led to the leap of faith — the booming market conditions at the time. In 2018, India ranked second in non-leather footwear production (right behind China), with 2.5 Bn units manufactured in that calendar year.

The country still retains the position, while reports from the rubber industry show that the per capita consumption of footwear with rubber soles (primarily used in the open footwear segment) increased from 0.5 to two pairs in the past decade.

Keen to cash in on the growth prospect, several direct-to-consumer (D2C) brands like Hyderabad-based Neeman’s and Bengaluru-based Flatheads and Monrow entered the space to promote the footwear thongs as style statements, with the focus on comfort, convenience and an outdoorsy accent. 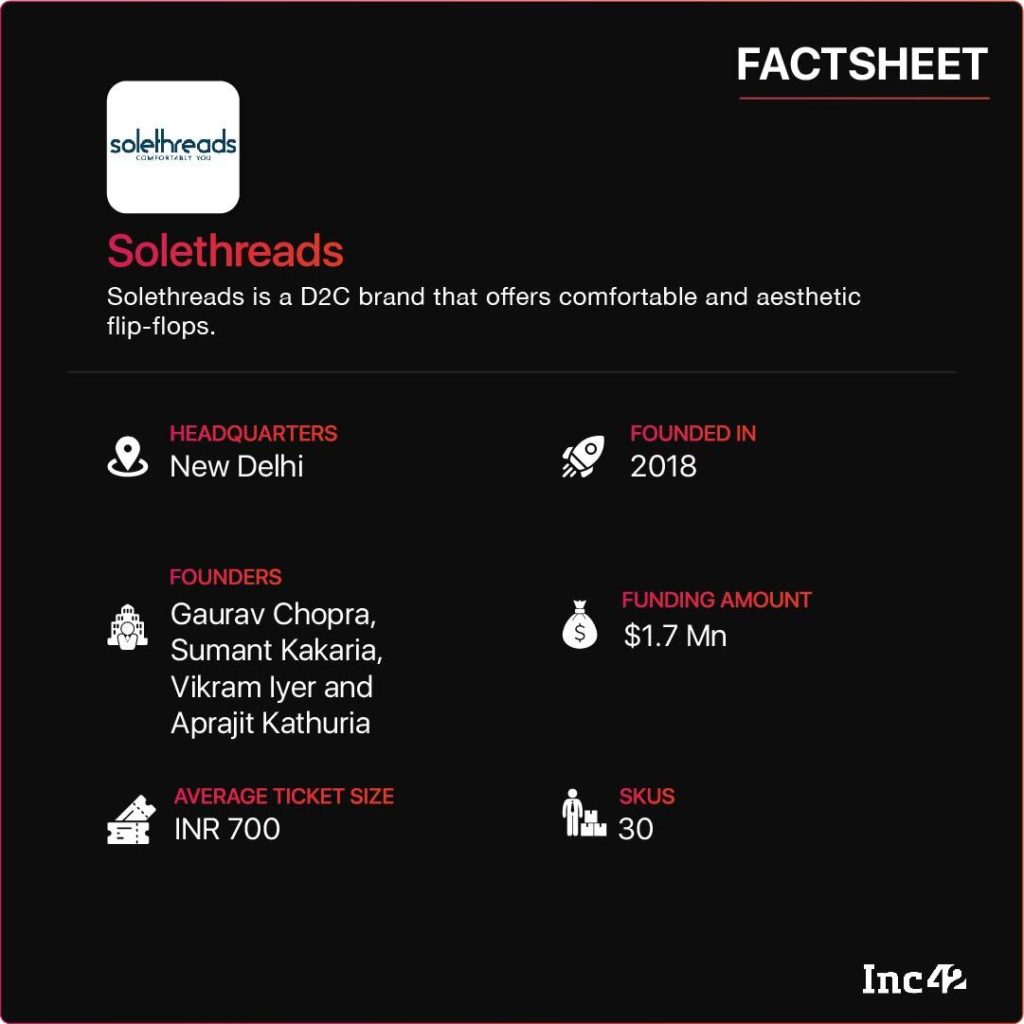 The flip-flop segment in India is still highly fragmented, with 75% of the production handled by unorganised players lacking in capital and R&D activities. Their limitations regarding design and material innovation gave Solethreads a much-need push towards the right direction.

Kakaria told Inc42 that he found flip-flops to be the largest footwear category by volume globally during his research. It boosted the team’s confidence.

“Despite the prospect, the flip-flop landscape was fairly dull in India. Plus, there are no leading brands that dominate the space. We mostly see a mass-production strategy by legacy companies but not a lot of innovation. In contrast, global players are innovating, but their premium pricing leaves out a big chunk of Indian consumers,” said Kakaria.

Consider this. Dallas-based footwear brand Hari Mari has come out with a new line of flip-flops with a chip installed (it works on NFC). According to the company, the chip connects with an app and helps it understand customers’ activities and product preferences when they don the footwear and are nearby.

In short, the company can track customer data to some extent and improve its products, which could not be done otherwise as flip-flops are sold through random retail outlets without any post-sales interactivity.

In India, however, the balance lies in matching product innovation with affordable pricing.

The flip-flop startup started with consumer research and soon realised that pleasing visual aesthetics would influence people. But material aesthetics or comfort would always be essential for physical products to build enduring relationships with customers. Therefore, the company decided to focus on comfort and functionality as its primary USPs.

Solethreads came out with new materials and improved processes to tweak how flip-flops were manufactured in India. It uses a patented technology that processes rubber and turns it into a memory foam-like material called Superfoam. This material, used in more than half of Solethreads’ products, makes the footbed softer than average.

Other patents include TruBounce that adds a layer of cushioning to the footbed, Recliner that uses high consistency rubber in the footbed, and Everlast, a skid-resistant outsole for slippery terrains.

The company has set up two sheet extrusion plants near the processing units in Delhi and Jaipur and makes thin sheets out of rubber to build products for different use cases. At present, Solethreads holds seven patented concepts.

Like many of its peers, the D2C brand has launched and sold its products via ecommerce marketplaces for greater reach and operational ease. The startup has also witnessed early success, thanks to its comfort-based innovations. Solethreads claims it has crossed INR 50 Lakh in gross merchandise volume (GMV) on Amazon in just four months and reached INR 1 Cr in revenue within seven months.

As of now, the flip-flop brand boasts more than 300 SKUs (30 different styles for men and women in different colours) besides its made-to-order design options. The pricing varies between INR 500 and INR 900, positioning it in the mass-premium category.

Solethreads has not revealed its FY21 revenue but claims to clock 30-35% gross profit annually. The company is aiming to push its to 40% and reach a GMV of INR 2 Cr by FY22.

Although these numbers are encouraging, there were plenty of hiccups in the initial phase. To begin with, all R&D expenses had to be borne by the cofounders as Solethreads was bootstrapped at the time. Worse still, the company was launched just before the Covid-19 pandemic struck in early 2020. That meant it had to navigate through lockdown restrictions, a temporary manufacturing freeze and the inevitable sales crunch apart from managing the usual challenges of running a four-month-old business.

A key challenge was hiring the first set of employees, mostly done remotely during the lockdowns. It further disrupted the co-ordination part as the startup was still building operations and processes.

“From hiring to training to meetings, we had to do everything virtually, and it was difficult to manage. But there was a silver lining. When we met in the office after the lockdowns were over, we found it quite easy to streamline the work and find cohesion among members,” said Chopra.

As is the most D2C brands, effective customer engagement and feedback have helped Solethreads stay in touch with ground realities and improve its products accordingly, said Kakaria.

For instance, feedback from some customers made the company realise that quite a few users were suffering from heel pain. Upon meticulous research, it was found that people with flat feet (level at the bottom instead of curved) suffered from such discomfort. So, the company added arch support to flip-flop soles and saw instant positive approval from the customer base.

The brand claims that 30% of its sales are currently generated through its website. So, it is now using marketing analytics tools to tap into customer behaviour on the website for actionable insights. Solethreads has also tied up with customer engagement platform MoEngage to understand customer requirements and engage with them more effectively.

Besides, the company has partnered with other business enablers to optimise its processes. It works with Unicommerce and Vinculum for inventory integration and order management, Paxcom for data analytics, Pickrr for logistics management and ClickPost for conveying last-mile logistics information, among others.

With robust and optimised processes in place, the startup intends to focus on brand-building to gain more traction. Solethreads raised INR 13 Cr in a series A round in April this year and part of this funding is being used to develop a content and branding playbook. It plans to launch new branding campaigns in the coming months and has kicked off the initiative by releasing its new logo in October.

“These are very exciting times. With all the buzz around the D2C ecosystem, brands today have a chance to make it big. But the determining factor will be the value proposition they offer and how efficiently they solve a problem for consumers,” said Kakaria.

Will these initiatives work well for Solethreads or its peers for that matter?

Globally, the flip-flop market was valued at $18.5 Bn in 2018. It is expected to reach $23.8 Bn by 2025 at a CAGR of 4.2%, according to Statista. However, the market concentration ratio remains low, indicating the presence of a large number of brands across the globe minus a true specialist.

As India already dominates in volume play, new-age brands in this segment can emerge as market leaders with the help of tech-driven innovations that will make the humble sandals more functional, comfortable and stylish.