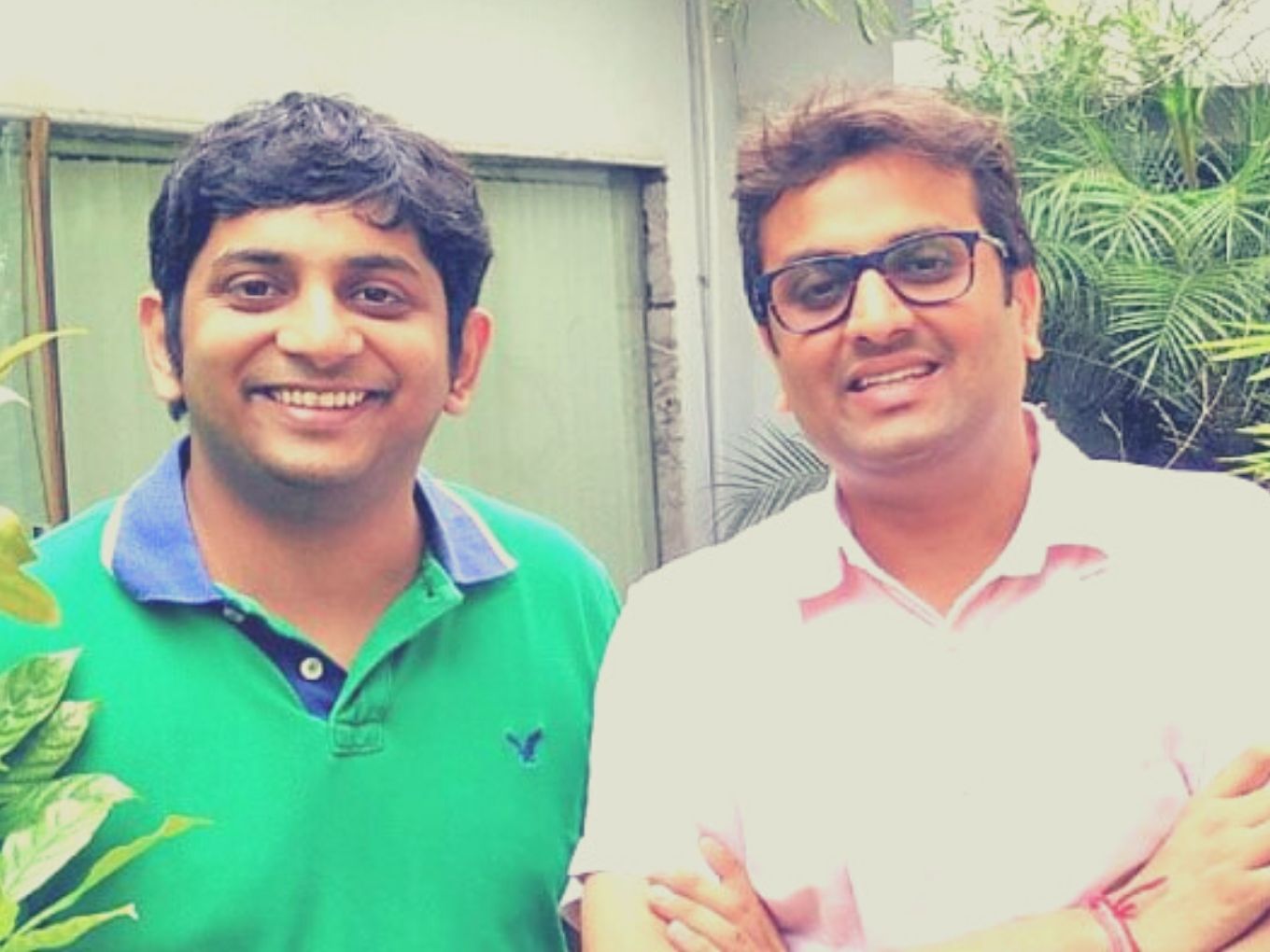 Prior to OTT content aggregation, the company worked on telecom and DTH plans comparison

With over 25+ video OTT partners, Flixjini largely focuses on the subscription-based players and has plans to enter regional language content discovery aggregation soon

Struggling with what to watch on Netflix, Amazon Prime Videos, Disney+ Hotstar or ALTBalaji these days is a bit like surfing the channels in the good old days — albeit not that old.

This happens to the best of us in the so-called binge-watch generation. Getting lost on the over-the-top (OTT) platforms is only natural with over 90 OTT platforms in the Indian market and over 40+ video streaming platforms alone. According to industry experts, on average, users spend about 20-30 minutes just discovering the content on OTT platforms, and if they are not sure what they are looking for, it may even take a day or two.

India’s hypercompetitive OTT space is busy roping in blockbuster movies and popular shows, some players are still figuring out ways to add newer content just to get their users hooked onto the platforms. Consumers today are spoilt for choice.

According to a GlobalWebIndex survey, 36% of the participants said that the biggest frustration is the sheer cost of managing multiple services. As reported in DataLabs by Inc42+’s ‘India’s OTT Market Landscape 2020’, the time spent on OTT streaming has increased significantly, where the content consumption across most platforms, including OTT, podcast, gaming have witnessed an average increase of 30-60% since early March.

So naturally, the modern-day OTT generation needs a digital ‘TV guide’, which is not only all-encompassing but also personalised. Chennai-based Flixjini is looking to go one step beyond and also work with OTT platforms to help them target the right set of users for subscriptions and cross-selling. Its content discovery platform is said to drive subscriptions, enhance user engagement and increase user retention for OTT platforms, which is critical for long-term success.

“We believe that there is no one single player who is going to rule this space. It is going to be everybody,” said Ankit Chhajer, cofounder of Flixjini.

Today, there are only a handful of OTT aggregators in the giant OTT landscape. Few of them include Flixjini, LetsOTT, Just Watch among others. According to industry experts, the OTT aggregator market could be the next major opportunity, just like TV guides changed how Indians watched content more than two decades ago.

At present, Netflix, Disney+Hotstar, Amazon Prime Videos among the leading platforms are upping the ante in the burgeoning space by providing in-built personalised experience and recommendations for its users based on their previous watched shows and movies. However, a majority of OTT players — primarily the ones which don’t have deep pockets like their global counterparts — are still struggling to reach customers and give them what they want. Needless to say, the OTT players might have been curating and creating some of the best content in the world, but what is the point if it isn’t visible to the right users at the right time.

Chhajer told Inc42 that while a majority of OTT aggregators in the space today focus on search and filter driven recommendations, Flixjini uses artificial intelligence (AI) algorithms for automatic content classification and personalisations to users. For seasoned users, the company said that its platform provides details such as meta info, award nominations and wins, critic reviews, box office numbers and more, which are not always available in on the native platform. This helps users make decisions with whatever criteria they want and not be limited by what options are on offer on Netflix or Hotstar or Amazon Prime or any platform.

Engineers turned entrepreneurs Jigar Doshi and Chhajer cofounded Cheeni Labs, the parent company of Flixjini, in 2011. The cofounders have known each other since their high school days and also went to the US to pursue degrees in computer science. Prior to venturing into the entrepreneurial world, Doshi had worked with Apple and Amazon, while Chhajer had a stint with UBS Investment Bank, where both worked on the technology and product development side.

In 2010, the duo returned to India with an idea to develop an aggregation platform called Komparify (launched as Planhound) which compared mobile tariff plans, pay bills and recharge options across digital payments like Paytm, Amazon Pay and Ola Money among others for Indian users. This was just the start. As time progressed, with Reliance Jio in the picture, they gradually ventured into aggregating mobile data plans, followed by DTH aggregation platform, and there was no stopping for them.

In 2018, the company also went onto acquiring Bengaluru-based iReff, a mobile plans app, to further expand its business. In late 2017, looking at the evolving OTT landscape, the company also launched Komparify Entertainment, where they ventured into aggregating discovery of contents across various OTT platforms to provide users with a hassle-free streaming experience. How Flixjini Stumbled On The Need For OTT Aggregation

Chhajer said that initially, the company began curating content discovery on its Komparify Entertainment. But, looking at the sheer magnitude of the industry, they decided to create a separate platform which was ‘Flixjini,’ dedicated to content discovery.

“I am a heavy streamer myself and I wanted an app,” added Doshi, “I mean, if something doesn’t work on Flixjini or Komparify Entertainment, we have done a lot, just because I needed something for my own usage. Therefore, the evolution of the product has been more personal as it has been created specifically because I can’t find something to watch, and I always keep running out of content in all these places.”

Today, there is a lot of good original content on OTT platforms. Often users miss out on watching them or find out mid-way that it is not worth their time. Flixjini acts as a guide to such users, as they leverage AI to aggregate movie and TV show reviews from across various platforms, thereby helping users make informed decisions before they start watching a movie or a show, which will directly lead them to the landing page of the content on the desired OTT platform. “We have done multiple iterations and failed a zillion times to get this right,” shared Doshi.

Besides providing a guide to watch the original content across OTT platforms, Flixjini also highlights the latest releases from across the platforms so that the user doesn’t miss out on the new content. In addition to this, as the user continues to use the platform, the content shown on Flixjini gets personalised to an extent that it understands the movie taste and mood of the users. “Obviously, Netflix has done a superb job on this, but we are doing this across streaming services,” Doshi added.

In the span of two and a half years, Flixjini has come a long way from where it all started. Before launching it in the market in March 2020, the app has been in the beta testing phase for most of its time. Currently, it is available on Google Play Store, Apple App Store and on their website. 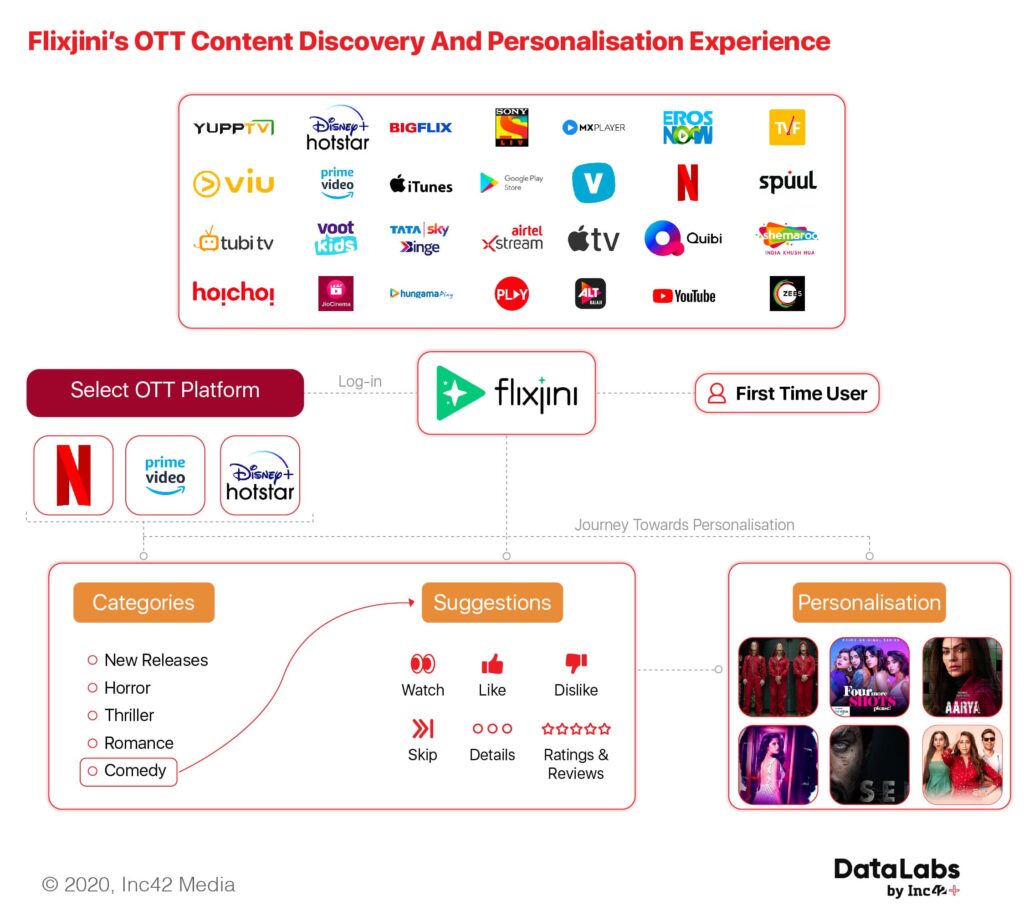 According to DataLabs by Inc42+, the average time spent by Indian users on OTT platforms has increased by 30-60% since early March 2020. In other words, a lot more users have been spending more time on the streaming platforms than ever before, to find content to binge-watch.

Citing fintech boom during demonetisation times, Doshi said that the Covid-19 lockdown phase has unlocked similar potential for OTT platforms like never before, where this is the first time people are getting to know the importance of discovering content.

Flixjini, which currently focuses on aggregating subscription-video-on-demand (SVOD) platforms, is revolutionising the OTT aggregation landscape, where it is providing new as well as seasoned users the ease of discovering content on-the-go.

Currently, the OTT landscape is divided into various categories based on the business models — SVOD (subscription), AVOD (advertising) and TVOD (transaction). The company is currently focused on aggregating SVOD because of the quality of the content and the users — and of course, the bigger revenue upside from bringing in sign-ups. However, in the future, Flixjini said that it plans to add AVOD as well. “SVOD platforms are where most of the action is as they are continuously pushing to get more users onboard via subscription model so that the users are hooked to their service MoM,” said Chhajer.

With The OTT Boom, The Future Is Discovery

Growing organically, the company currently has a lean team of 18 members, spread across various functions, where 60% of them belong to the design and tech team, followed by accounts and marketing. The company is levering SEO and SMM tools to increase its users base. Interestingly, Flixjini noticed that its typical audience ranges from anywhere between 18 to 60 years of age. However, the company is focusing on targeting, 21 to 44 age group, constituting 70% of OTT user base.

Flixjini has partnered with a few OTT players directly while conversations with others are underway, said Chhajer.

Sharing the roadmap ahead of Flixjini, Doshi said that, in the coming months, the company plans to release a TV app (on both Android-powered smart TVs as well as Apple TV), add more categories like sports, and expand its customer reach across geographies. It also intends to focus on aggregating localised video streaming content discovery feature to reach more users.

Flixjini claims that it has close to 4 Mn monthly active users and visitors, and 12.5 Mn app download across Komparify Entertainment, iReff and Flixjini combined. However, in its Flixjini platform, since its launch earlier this year, the company said that with little or no marketing it drives more than 1 Mn clicks. “That is really significant, as we are just getting started,” concluded Doshi, “Simply put, the less time a user spends on our platform and more clicks kind of defines our purpose as an OTT content discovery platform.”