10 Brands Which Successfully Rebranded Their Names

10 Brands Which Successfully Rebranded Their Names

What’s in a name? These businesses built a fortune on their brand names but they didn’t start that way

Did you know that Google was initially launched as BackRub? 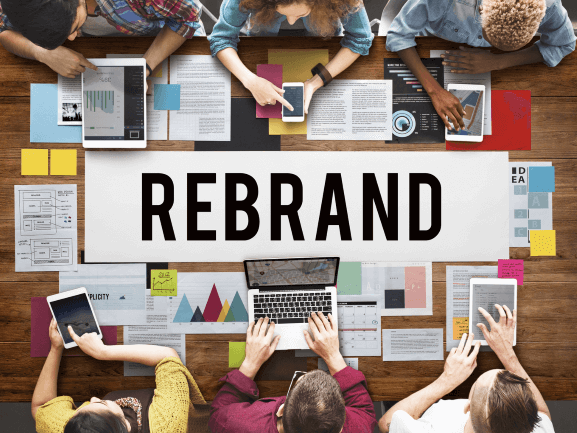 Brand names and identities are changing all the time — and it’s not just restricted to those companies who want to overhaul their public image.

The process of rebranding is no less than walking on a thin layer of ice where one small mistake can lead to an imminent downfall. From logo changes over the years to brand name revamps,  the industry has seen it all.

Gary Vaynerchuk once said sales are the bedrock of business. As a business grows and ventures into new markets, its target audience also diversifies. With incessant changes in consumer behaviour over time, at the end of the day, the process of rebranding becomes an act of selling a bundle of new ideas to consumers.

The connotations associated with a brand also change with time as it forays into new areas. For instance, a QZ report highlights the rebranding of the US-based digital services provider GoDaddy to “The Go” as a move to remove the sexist connotation associated with its former name and give the brand a “go-getter spirit” meaning.

From Backrub becoming Google, Relentless becoming Amazon, Foodiebay becoming Zomato —  many industry giants originally had different names when they came into the picture.

Here Are Some Brands That Changed Their Identity With Time

Before selling it off to the social media giant Facebook, Instagram founders Kevin Systrom and Mike Krieger named the photosharing app Burbn. Initially, Burbn was launched with the objective of location-sharing, earning points while check-ins and post-event picture sharing for iPhone users.

However, a report by The Atlantic mentions the failure of the app due to several complicated in-app features. The founders then tweaked the app several times to finally focus on the photosharing aspect and created what we know today as Instagram.

The digital payments industry is expected to grow into a $1 Tn in India by 2023. Before the advent of growth in this sector, global payments player PayPal was synonymous with online payments.

But did you know that PayPal was initially launched as a money transfer service by a different name? It was called Confinity before being merged with Elon Musk’s online banking company X.com.

What initially started off as a food directory website known as foodiebay in 2010 is currently recognised as one of the biggest foodtech unicorns in India. After two successful years of Foodiebay, the company rebranded to Zomato.

Founder and CEO Deepinder Goyal and cofounder Pankaj Chaddah led Zomato to achieve the status of India’s first foodtech unicorn. Currently valued at over $3 Bn, Zomato recently made headlines by acquiring a stake in Uber Eats. Many experts believe this move could give rise to a Zomato-Swiggy duopoly in India.

Initially launched as BackRub to focus on the link-back aspect, the tech giant’s name was later changed to Google.

Founded by Larry Page and Sergey Brin, Google is currently hailed as one of most successful companies in the world, the rebranding of BackRub to Google aligns with the company’s entrance to new markets and several sub-brands.

In December 2019, Google’s parent company Alphabet named Sundar Pichai as its CEO with both founders stepping away from day-to-day operations to join the board of directors.

The transition from Odeo to Twitter is hailed as the most legendary business rebranding in social media history.

What we today know as Twitter was initially launched as a podcasts platform before converting its model to a microblogging website and app. The social media giant feared its demise due to Apple iTunes taking over the podcast niche.

The richest human walking on earth, Jeff Bezos, launched an online bookstore in 1996- Relentless, which was later rebranded to Amazon.

The logo itself signifies the several sub-businesses owned and managed by the ecommerce giant. Founder and CEO Jeff Bezos visited India recently and promised a billion-dollar investment in the country — so far, Amazon has been relentless in its pursuit of ecommerce success.

In January 2020, the Gurugram based home services marketplace UrbanClap rebranded itself to Urban Company introducing six new sub brands. The company claims that it wanted a globally acceptable brand name, given that it has a presence in India, Australia, Singapore and the UAE

An initial competitor to Google before the latter surged its growth, Yahoo was launched by two Stanford graduates as a search engine for the internet by the name – Jerry’s Guide To The World Wide Web.

The long name was then shortened to the catchier – Yahoo!.

Auction site eBay was initially launched as a dedicated platform to bringing together buyers and sellers in an honest and open marketplace. Founded by Pierre Omidyar in 1995, AuctionWeb was officially renamed as eBay.

eBay remained as the largest global ecommerce marketplace until Bezos’ Amazon took over in terms of product sales.

The burgeoning online dating industry is welcoming several new apps and websites to simplify and digitise dating and matchmaking for individuals.

US-based Tinder, which was launched in India in 2016, was initially named Matchbox before introducing a catchier name which instantly became a hit.

With the online dating in India expected to reach a market size of INR 10,000 Cr by 2021, Tinder is an active contender amid competitors such as Priyanka Chopra-backed dating app Bumble.