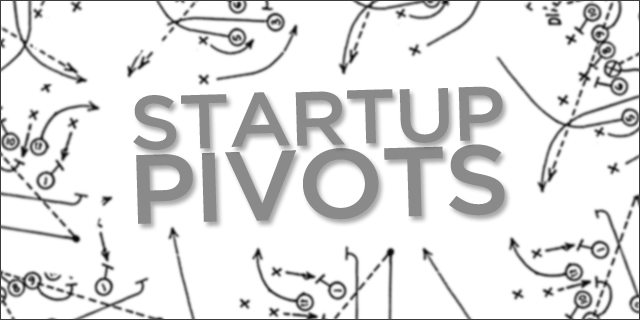 The most critical decision for an entrepreneur is to know when to stay the course vs. change direction.  I’ve spoke at length about how to deal with “The Entrepreneur’s Dilemma.”  Today we launched the new version of Docstoc that completes our 6 year evolution from a professional document sharing website to the go-to resource to start and grow small businesses.  In part we were inspired by some of the most famous business pivots of some of the most famous brands.  Here are fourteen extraordinary examples:

The most legendary pivot in social media history is the transformation of Odeo into Twitter. Odeo began as a network where people could find and subscribe to podcasts, but the founders feared the company’s demise when iTunes began taking over the podcast niche. After giving the employees two weeks to come up with new ideas, the company decided to make a drastic change and run with the idea of a status-updating micro-blogging platform conceived by Jack Dorsey and Biz Stone.

PayPal has always focused on payments, but it has gone through many permutations. It was developed by a company called Confinity in 1999 to allow people to “beam” payments from their PDAs (handheld digital computers, such as the Palm Pilot, an early incarnation of the smartphone). After merging with a financial services company called X.com, PayPal became the preferred online payment system for eBay sellers, which propelled its name into payment processing fame.

In 2007 Andrew Mason created a website called The Point, which was a “social good” fundraising site that ran on a “tipping point” system, where a cause would only receive funding once the pledged donations reached a certain number.  Mason started Groupon as a side project, which applied a similar “tipping point” concept to local deals: if enough people pledged to do an activity, they would unlock a discount on it. The Groupon project quickly eclipsed The Point in popularity, and became the daily deal tycoon we know today.

The coffee shop which now inhabits every street corner (and sometimes two on each street corner) did not always sell fresh-brewed coffee to customers. They started off in 1971 selling espresso makers and coffee beans, which Howard Schultz (current chairman, president and CEO) fell in love with on first taste. After his visit to Italy in 1983, Schultz was determined to actually brew and sell Starbucks coffee in a European-style coffeehouse, and transformed Starbucks into the nationwide java sensation it has become today.

These days Nokia may be in need of another pivot, but we all remember the glory days when a large percentage of cellphone users sported a Nokia (usually adorned with a trendy plastic case). Nokia actually began as a Finnish paper mill in 1865; the second mill opened on the Nokianvirta river, which inspired the company name we know today. Nokia created a wide variety of products throughout the 20th century including rubber goods, electronics and telecommunications devices, and eventually their first mobile phone in 1992. They decided in the same year to focus exclusively on their mobile devices, and sold off all other divisions of the company.

Flickr actually began as an online role-playing game called Game Neverending, where users would travel around a digital map, interact with other users and buy, sell and build items. The game also included a photo-sharing tool, which turned out to be one of the most popular aspects of the game. The company decided to leverage this photo popularity and pivot to Flickr, which was acquired by Yahoo! in 2005, and became one of its most beloved and successful acquisitions.

Hewlett-Packard has shifted focus since it launched as an engineering company in 1947. It began by creating a slew of electrical testing products, including audio and signal generators, but in 1968 introduced the first large-scale personal computer. Personal consumer-friendly computers did not catch on until the 1990’s, when HP focused solely on getting Americans to buy home computers and diverged the production of their testing equipment into a separate company. Since then it has focsused mainly on computers and printing/scanning accessories.

We all know Nintendo for innovating and inspiring an era of mass-produced video games, such as Super Mario and Donkey Kong. However, the company existed several centuries before that, and dabbled in producing everything from playing cards to vacuum cleaners, instant rice, a taxi company and even a short-stay hotel chain (also called a “love hotel,” I’ll leave it up to you to figure out what that is). It was in 1966 that Nintendo started producing electronic games and consoles, which gained wide popularity over the following 30 years.

Instagram is the most widely used photo app for iPhone, but many don’t know its origins. Instagram began as Burbn, a check-in app that included gaming elements from Mafia Wars, and a photo element as well. The creators worried Burbn had too much clutter and potential actions, and would never gain traction. So they took a risk and stripped all the features but one: photos. They rebuilt a version of the app that focused solely on photography—it was clean and simple, and clearly it paid off.

Wrigley didn’t always sell gum. In fact William Wrigley Jr. stumbled on the value of gum while giving it away for free. Mr. Wrigley Jr. moved to Chicago in the 1890’s and took up work as a soap and baking powder salesman. He got the idea of offering free chewing gum with his purchases, and the gum proved to be more popular than his actual product.  Wrigley went on to manufacture his own chewing gum brands, Juicy Fruit, Spearmint and eventually Doublemint. Today the company grosses billions in revenue and is one of the most recognizable brands in American history.

Avon is one of the most popular names in makeup, whose products are sold by beauty representatives throughout the world. It started, however, with a similar history to Wrigley. David H. McConnell was a traveling book salesman, and he realized that his female customers were more interested in the free samples of perfume that came with the books than the books themselves. He began recruiting women to sell his perfume product, believing they would be able to relate and sell to one another better than male salesmen.

Fab, a modern fashion site that pulls hundreds of millions of dollars in revenue annually, actually began as Fabulis, as a social network targeted towards gay men. Although their social site tanked, in their side jobs the co-founders had a knack for selecting products that customers liked, so they decided to take a totally new direction with Fab selling hand-picked home goods, clothing and accessories. Their sense of taste paid off, as Fab now has over 10 million loyal users and is on an upward trajectory.

This incredibly popular “pinning” social network pivoted from “Tote” which allowed people to browse and shop their favorite retailers, and sent them updates when their favorite items were available and on sale. The creators realized that the users of Tote were mostly interested in building “collections” of their favorite items, and sharing these collections with friends. Since its repositioning, Pinterest now has over 70 million users with approximately 80% of its users being women. While its pivot has been wildly successful in terms of user growth, Pinterest is trying to figure out how to get back to Tote’s ecommerce and revenue roots.

This automotive company may be best known in the U.S. today for their high-performance motorcycles and sports vehicles. But from 1910 to 1935 Michio Suzuki was best known as the inventor and purveyor of weaving loom machines that powered Japan’s silk industry. An inventor at heart, Suzuki started looking for other products to produce in the interest of diversification. Suzuki’s complete 180 might have even given the founders of Odeo and Twitter pause. In either case, it’s all quite tweet-worthy.

About The Author – Jason Nazar

Jason Nazar is the Co-Founder & CEO of Docstoc.com, which provides the best quality and widest selection of documents & resources to start & grow small businesses.