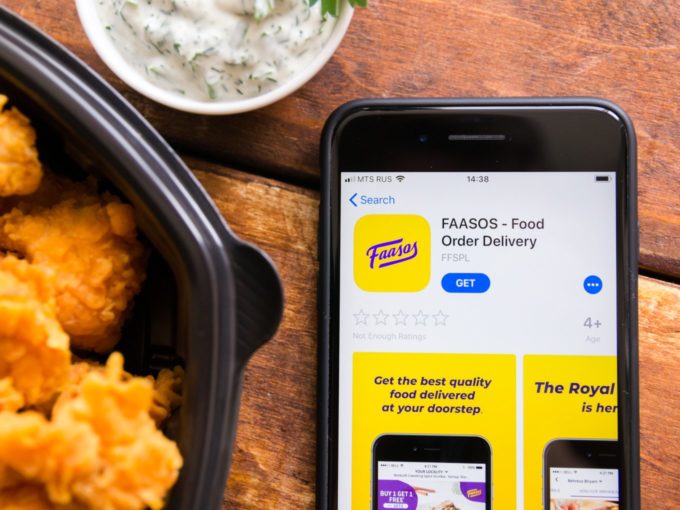 With the second wave of the Covid-19 pandemic unleashing havoc all across India, the country has grudgingly slipped back into the mode of lockdowns and curfews. Industries such as travel and hospitality, which had only just begun to recover their pre-Covid volumes at the beginning of this year, are again staring at a major disruption. For the restaurant industry, particularly, the high-end dining restaurants, lockdowns have either forced closures or compelled them to open an online storefront for accepting home orders.

In such times, food aggregators such as Zomato and Swiggy have witnessed increased traction since late last year, when they had recovered their pre-Covid volumes. Their tie-ups with cloud kitchens may be the future of the food and restaurant industry for the foreseeable future given the recent surge in cases. Another company looking to leverage the presence of several cloud kitchen brands under its portfolio is Faasos’ parent Rebel Foods. However, the company’s ambitious scale and growth plans seem to have placed it on a sticky financial footing. 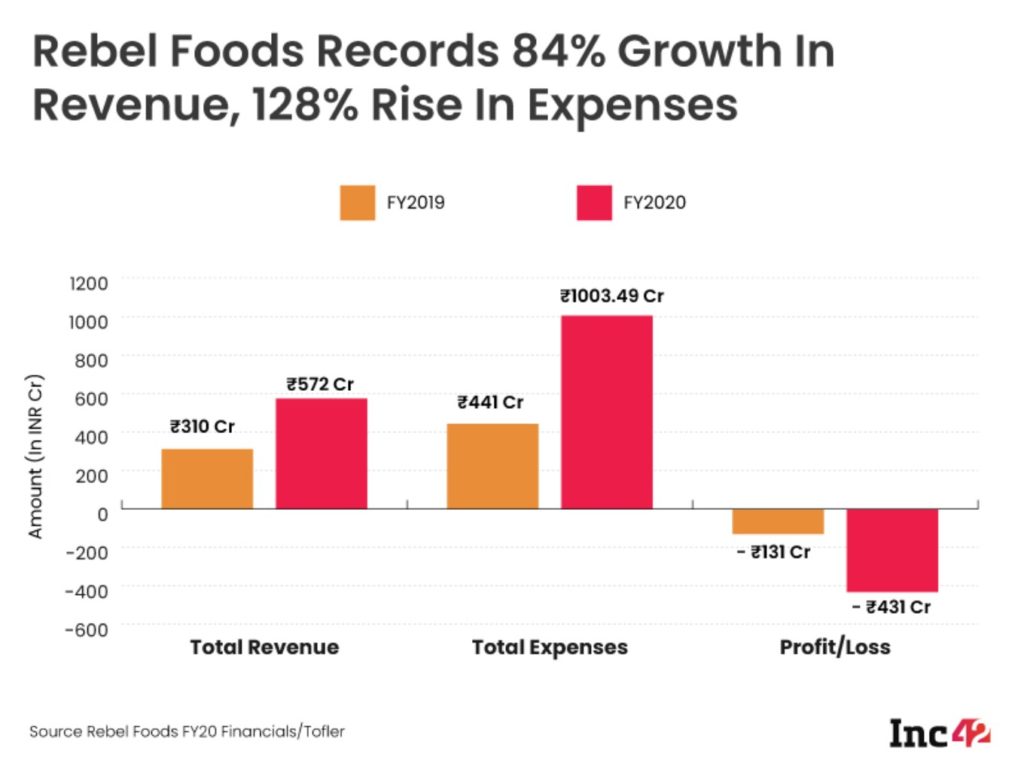 The company earns its operating revenue from the sale of food products and income from making home deliveries for orders received through its online portals. Rebel Foods has not given a breakdown on which of its brands brings in the most revenue. Founded in 2010 by Jaydeep Barman and Kallol Banerjee, Rebel Foods started out as Faasos but has since launched 11 other food brands under various pricing segments. These include Behrouz Biryani, The Biryani Life, Mandarin Oak, The Good Bowl, Oven Story and Firangi Bake. 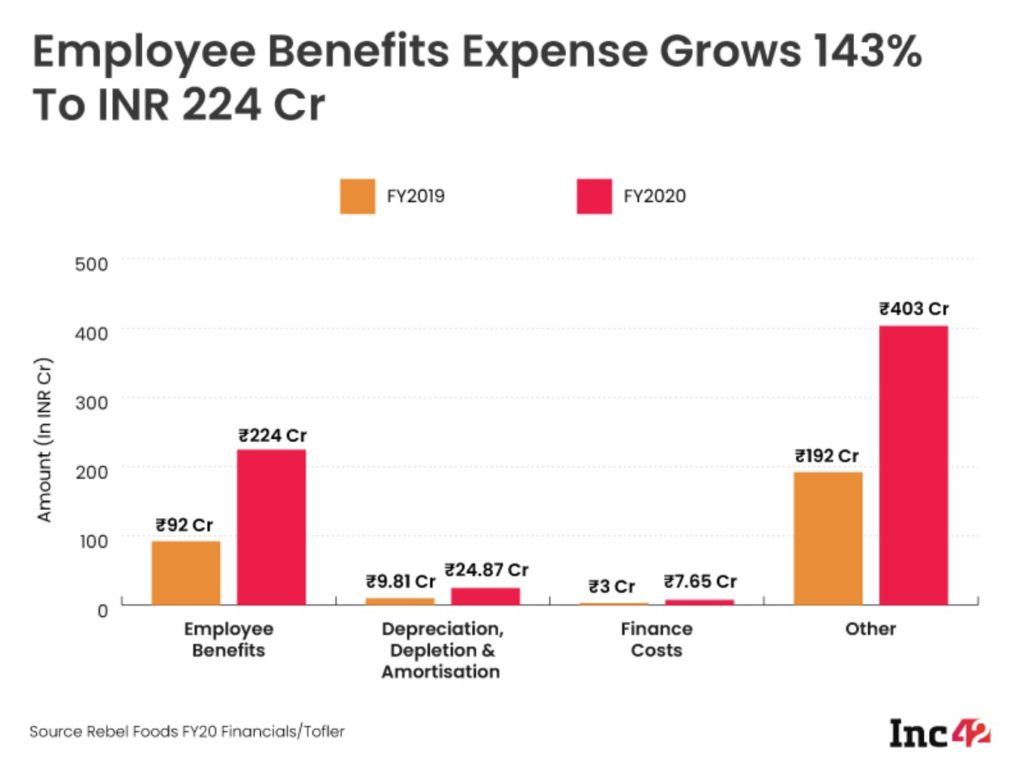 Other expenses also include commission paid by the company to selling agents such as Zomato and Swiggy, which doubled from INR 48 Cr in FY19 to INR 96 Cr in FY20. Rebel Foods’ advertising and promotional expenses also increased by 61% to INR 117.64 Cr.

Talking about the company’s financial performance, a Rebel Foods’ spokesperson said, “FY20 was a year when we invested in growth, focused on increasing our footprint in India, Southeast Asia, and the Middle East, as well as technology, and our people. We saw the opportunity to emerge global leaders in a sunrise industry and doubled down on that.”

In August last year, Rebel Foods’ cofounder Banerjee told Inc42 that the company generates roughly 50% of its demand through Zomato and Swiggy, and the rest from the individual websites dedicated to each of its brands. Banerjee explained that Rebel Foods’ has two brands in the same food category, but at different price points, which helps cover more of the market and beat the competition on pricing as well, without giving up on the margins completely.

For instance, Rebel Foods has two Biryani-focussed brands, Behrouz Biryani and The Biryani Life, the latter priced considerably lower than Behrouz. So, while Rebel treats Behrouz as the premium brand which sticks to its prices, it plays the discount war with its competitors through The Biryani Life. This, after the company started facing increased competition from other D2C restaurants such as Biryani By Kilo and Biryani Blues. While the company has so far implemented this strategy only in the ‘Biryani’ category, Banerjee explained that based on customer feedback, it will look to employ the same experiment in other food categories as well. The company would do so by starting a new label from the same kitchen that is dedicated to an existing label. Its staff would need to be trained with changing product quantities and bringing in mild changes in ingredients and taste depending on the target consumer.

Rebel Foods claims to be running 325 cloud kitchens across the country, with a presence in 35 Indian cities as well as in Southeast Asia, the Middle East and Europe. It competes with several other players such as Box8, Freshmenu and Wow! Momo.

In December last year, Rebel Foods’ entered into a partnership with American fast food company The Wendy’s Company to help the latter open 250 cloud kitchens across India. These cloud kitchens will be developed and operated by Sierra Nevada Restaurants, which holds the India master franchisee for Wendy’s.

A partnership with Rebel Foods will give Wendy’s the advantage of a pan-India scale as well as local know-how. “By partnering with the Rebel Foods network of existing kitchens in India, Wendy’s will get immediate access to rapid scale across the country, at far lower levels of capital,” Kallol Banerjee of Rebel Foods had said.

The Pune-based company has so far has raised $342.3 Mn in 20 funding rounds from 19 investors such as Sequoia Capital, Goldman Sachs and Coatue. The company’s last funding round was in July last year, a Series E round worth $26.5 Mn led by Coatue.

According to RedSeer Management Consulting, the Indian cloud kitchen market is expected to grow from a size of $400 Mn in 2019 to become a $2 Bn industry by 2024, owing to costumer’s increased preference for ordering their food online.