So far, this strategy has been used by Rebel for its biryani-focussed brands — Behrouz Biryani and The Biryani Life — with plans to do the same across its brands

Even as India’s restaurant and food retail industry scrambles to recover after the Covid-19 lockdown, the food delivery and aggregator focus has squarely been on cloud kitchens. And within this ultra-competitive space, cloud kitchen soonicorn Rebel Foods is looking to put some distance between itself and its rivals.

With a focus on age-old FMCG success strategy, Rebel Foods is looking to double down on many of its categories — literally — to ensure market success and move beyond the discount-led competition. Cofounder Kallol Banerjee told Inc42 that the company is looking to create tiers within its various brands and food categories to better compete with rivals at full price.

“We can react to any kind of competition or any new food trend very quickly as it is all a digital play.”

The strategy here is product flanking, which is a competitive marketing strategy in which a company produces its brands in a variety of sizes and styles to gain shelf space and inhibit competitors. In the case of Rebel, the flanking comes from the introduction of different brands and products at different prices to cover as many market segments as possible. It is basically offering the same product in different sizes and price combinations to tap diverse market opportunities.

This has been a key strategy for FMCG brands in scaling up and the successful implementation of this has already been done by major brands like Mercedes-Benz against General Motors, electronics giant Samsung and Xiaomi in their competition in India as well as other categories where there is heavy competition such as alcohol and tobacco brands.

Rather than competing head-on and trying to crack the right pricing, Rebel is going for a market penetration approach. It’s competitors can either offer premium quality or discounts, but it’s covering both bases while reducing cash burn.

For the uninitiated, the Pune-based company was founded by Jaydeep Barman and Kallol Banerjee in 2010. It operates multiple quick-service food brands independently, facilitating deliveries through its app or through online food delivery platforms like Zomato and Swiggy. The company generates 50% of its demands through Zomato and Swiggy. It has 12 in-house brands such as Faasos, Oven Story, Firangi Bake and Mandarin Oak.

Banerjee explains that the company has two biryani-focussed brands— Behrouz Biryani and The Biryani Life, which is priced considerably lower than Behrouz. This way, Behrouz does not have to lower its price points to compete. 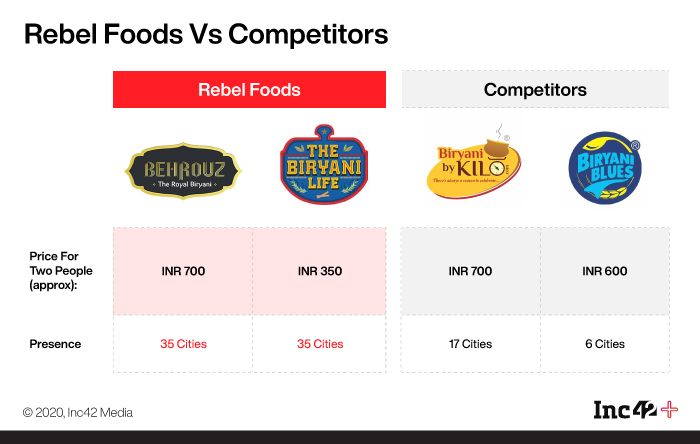 Rebel admits that the competitors in the biryani space were piling on a lot of pressure through discount — especially brands such as Biryani by Kilo and other delivery-only brands.

“We don’t play the discounting game with Behrouz, so we let Biryani Life do that. If we look at a complete category, we should have a certain share of the category, for the brand we are going to keep premium. So the power brands are where we would be doing the TV commercials, we talk and more, but the active brand is just meant to compete on discounts and more,” Banerjee added.

As it sees more competition in a particular category, Rebel is just creating a new label from the same kitchen similar to how an assembly line works. The company changes product quantities, refines the taste to suit the target audience and more, but the process is similar to starting a new kitchen, which can even be scaled to a national brand. “We can react to any kind of competition or any new food trend very, very quickly because most of the work is digital, it’s done in one place in 30 minutes. So the rest is training people and all of that which takes time. But that’s the advantage of cloud typically,” he added.

At present, visibly the company has put the strategy to use for its biryani brands, but with its array of 12 brands already, with several others in the pipeline, it can constructively put the same strategy for other brands. For instance, with its brand Oven Story, the company competes with the likes of Dominos’, Pizza Hut, Pizza On My Plate, and more; while for its coffee brand Slay Coffee, it is competing with the likes of Starbucks, Cafe Coffee Day, Blue Tokai and more.

Banerjee confirmed that on the basis of customer response, the company will implement it further going forward. 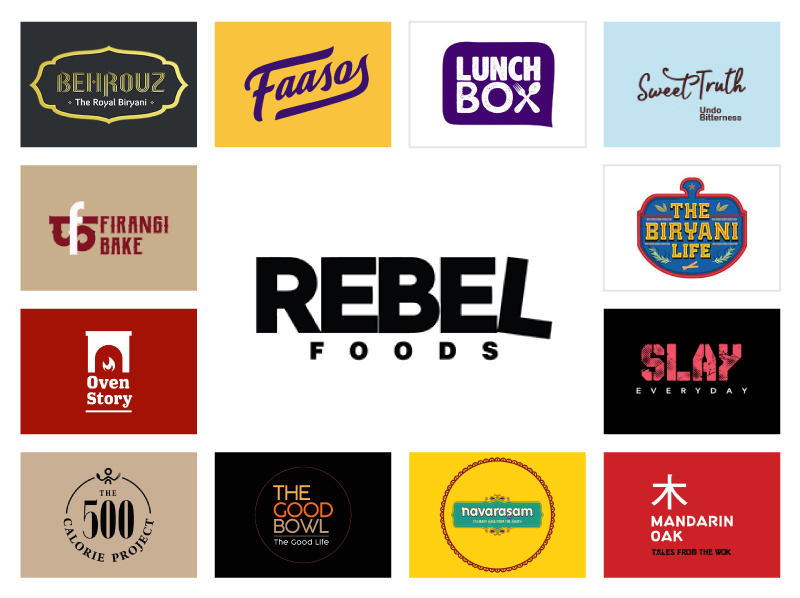 While this isn’t a very unique strategy, and other players can leverage this, they would need a stronger presence and reach like Rebel Foods, which also involves huge operational investment. “You will have to put in the effort to put in the time, which cannot be short-circuited. You need to put in 300 kitchens, to build a national brand and 300 kitchens need time, to put the 300 kitchens and staff, training etc,” Banerjee said about the moat Rebel has made.

With over $342.3Mn raised till date from investors like Coatue Management, Go-Jek, and Goldman Sachs among others. Clearly, it has a huge amount of capital at disposal to choose this strategy, unlike its peers. However, the company has strong competition from food aggregators like Zomato and Swiggy, who also have their own network of cloud kitchens. At the same time, other players in the cloud kitchen space include Ola Foods, FreshMenu, Box8, QSR Foods among others.

He noted, “Nothing that we do individually is something that cannot be copied or replicated. But to make the whole thing work you will still need to spend a lot of time, which we did.”

Banerjee is also confident of pulling off newer projects as these are “just another play”. For instance, the company is working on a meal kit product and Banerjee is confident of cracking the market which several others have failed to. He also noted that there are several examples of failures— Blue Apron, Fingerlix and more. Till now, the ready-to-eat market has mostly struggled to grow in the right direction amid larger FMCG players. For instance, Yumlane, which started in 2016 to sell frozen pizzas, decided to pivot to the cloud kitchen model while another player, Fingerlix has been struggling with limited products available on Amazon and the website has disappeared.

Many of these companies might have failed because meal kits were the only thing they were doing. For Rebel Foods, RTE is just one of the many things to do and hence, lack of dependency on adoption. What works for Rebel, as per Banerjee, is its kitchen and supply chain network.

“So this is for us just another play, which we can execute very easily. We can work with our supply chain guys to make, let’s say a 200-gram rice pouch. Now that is not something that they will entertain unless you give them a certain value. So, these are things which are easy for us to do. And obviously, we don’t think that delivery-only proposition in itself will be easy to pull off. But it’s the combination of another opportunity that I think we are best placed to do,” he added.