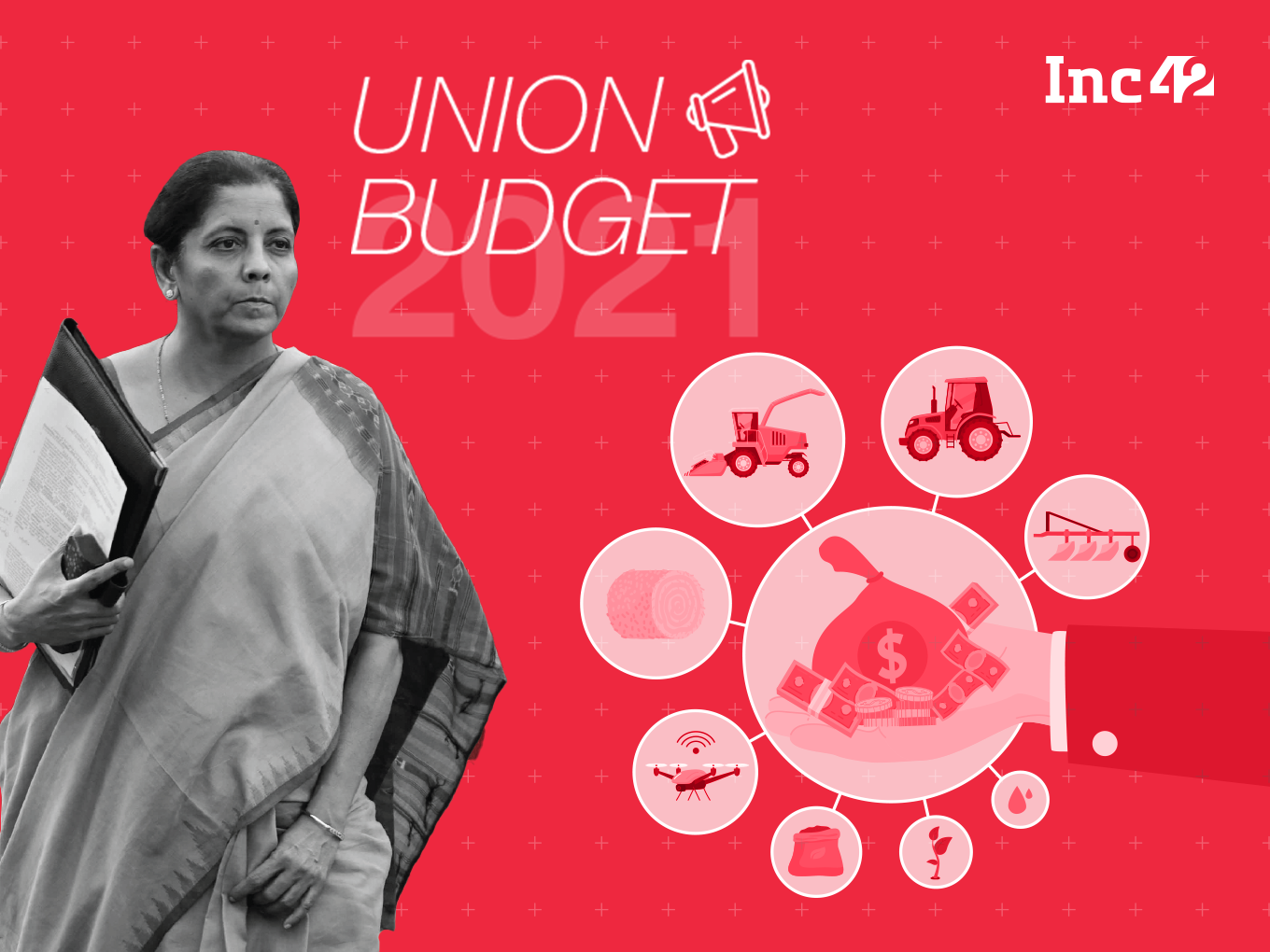 Focus on agricultural infrastructure and enhanced credit flow, especially to niche segments like animal husbandry, has been welcomed by agri-fintech experts and startups

Additionally, the focus on SWAMITVA Scheme and agri infrastructure is expected to boost agri-financing

Getting timely and adequate finance is one of the most crucial requirements for farmers. But such demands remain largely unmet in India as the current financial system is unable to cater to smallholder farmers’ needs, arising out of bad harvests, pest attacks or inclement weather.

India’s agri-fintech startups have been playing a key role in bridging this gap. With financial inclusion most crucial for this sector, rural fintech is also expected to become a major investment theme within the agritech space.

The Union Budget 2021, presented in Parliament today, has announced raising the agricultural credit target to INR 16.5 Lakh Cr in FY2021-22 from INR 15 Lakh Cr in the previous financial year. The Budget also focusses on increasing the agri credit targets for fisheries, dairies and animal husbandry.  What this means for India’s agri-fintech startups?

“The agricultural credit target has been consistently increasing. It is good that the government is recognising the need for credit in this space. The agri-fintech startups can play a crucial role with this allocation; they can democratise it by taking the credit to a large number of farmers with the help of technology,” says Hemendra Mathur, venture partner at Bharat Innovation Fund and cofounder of ThinkAg.

If out of 15 Cr farmers, five Cr are getting this credit, agri-fintech companies can potentially include more beneficiaries, say, six Cr farmers, he explains. “The startups can ease the process of onboarding farmers. They can do their KYC, verification and document uploading with ease to help the concerned financial institutions,” he notes.

The target has been set in the Budget, but there is still no clarity regarding implementation. “While the details of implementation are not clear yet, with enhanced credit, there will surely be more liquidity in the market. This is going to impact the sector very positively,” says Santosh Kumar Singh, director, agriculture, energy and climate change, at Intellecap, an advisory firm that helps organisations improve business competitiveness.

SWAMITVA Scheme And Other Takeaways For Startups

Additionally, the Finance Minister Nirmala Sitharaman has proposed to extend the SWAMITVA Scheme to cover all states/UTs during FY22, which can have a lot of positive impact on the ecosystem. Earlier this year, the government launched the SWAMITVA Scheme under which a record of rights is given to property owners in villages. Under this scheme, about 1.80 Lakh property owners in 1,241 villages have been provided cards until now.

So, collecting land records becomes crucial for rural fintech, and this scheme is expected to make the process seamless. “When lending startups provide loans, it will become easier to verify the land records and give loans against those. It will lead to fintech innovations and give farmers easier access to credit,” adds Singh of Intellecap.

While agri-fintech startups have been able to benefit farmers to a great extent, growth in this segment may remain slow unless there is a push from the government towards digital infrastructure, feel experts.

Giving access to digital data and transactions in the agri supply chain will also improve the integration of financing solutions. However, not much has been done in this area and the Budget has no mention of the same, says an expert on the condition of anonymity.

In October 2020, the Indian government hinted about its plans to create an agristack to help farmers access various farm schemes. This would act as a common data infrastructure involving all farmers along with land record details. Ashish Kumar Bhutani, the joint secretary in the Union Agriculture Ministry and CEO of Pradhan Mantri Fasal Bima Yojana (PMFBY), said, “This will act as a one-stop shop for data, including access to finance by farmers, startups and researchers for developing new apps so that the benefits reach the grassroots.”

If the government can develop this, it can become a game-changer for fintech startups. “This data will give ready access to information when a banker wants to know a farmer’s income potential and the debt risk involved. That is where the government should put in a lot of effort. No one can create it at scale like the government as it involves an element of constant validation,” says an expert who does not want to be named.

The non-availability of customer data, the prevalence of informal credit and cash repayments are the major obstacles which have made agri-fintech the least-funded segment. That is why out of the 1,000-plus agritech startups in India, only a handful are operating in the agri-financing space.

Additionally, the Budget also missed mentioning the farmer producer organisations (FPOs). Several agri-fintech startups, including Sammunati and SAgri, are working with FPOs to reach out to farming communities as it helps them mitigate the risks posed by individual farmers.

According to a national paper titled Farmer Producer Organisations (FPOs): Status, Issues & Suggested Policy Reforms, around 6,000 FPOs are now operational in the country. Most of them were set up under various initiatives of the central and the state governments such as the Small Farmers’ Agribusiness Consortium (SFAC), NABARD and others, in the past 8-10 years.

The idea is to create an organised community for farmers hailing from the same geography to rally for minimum subsidies, inputs and other benefits. However, the number of FPOs is reportedly fewer than what has been mentioned in the paper. Startups were expecting some measures to boost these FPOs for smooth operations, but they were not mentioned in the Budget speech.

Given this scenario, the target of 10K FPOs already set in the Union Budget 2019-2020 seems ambitious. “Farmers may typically lack the skills needed to run a business and an ecosystem is required with active participation from state governments. As such an ecosystem do not currently exist and may require deliberations from multiple stakeholders, the government may have refrained from any such promises,” says Ankur Bansal, cofounder and director, BlackSoil.

The Budget’s focus on allied areas like dairy, animal husbandry and infrastructure creation has, however, been welcomed by startups. The FM announced that the government would focus on ensuring increased credit flows to animal husbandry, dairies and fisheries. It also proposed substantial investments to develop modern fishing harbours and fish-landing centres starting with Kochi, Chennai, Visakhapatnam, Paradip and Petuaghat, which will be developed as economic activity hubs.

“Traditionally, the funds have been clubbed and allocated, and there has been no demarcation of allocation, specifically to aquaculture and animal husbandry. Therefore, the special attention to animal husbandry and aquaculture is a welcome move,” says  Prasanna Manogaran, founder of Aqgromalin, an agritech startup that focusses on aquaculture.

“But we need to observe the vehicle for delivery of these funds and how it will reach the last mile,” he adds.

Additionally, the government announced increasing the allocation to the Rural Infrastructure Development Fund from INR 30,000 Cr to INR 40,000 Cr and raising the Agriculture Infrastructure and Development Cess (AIDC) on a few items.  This is also considered a positive move for startups in the post-harvest financing segment.

“Increased farm-gate level infrastructure will enable produce storage by small farmers and FPOs instead of distress sale. This storage can be leveraged for financing. Good storage facilities encourage banks and NBFCs to lend against the commodities stored,” says Prasanna Rao, CEO and cofounder of Arya, a post-harvest agritech company.

Further, good infrastructure also encourages more buyers to procure from near-farm-gate markets. This opens up other value-chain financing opportunities like bills and invoice discounting,” he notes.

Overall, the Budget has been welcomed by the agri-fintech startup ecosystem. However, some feel that the government should have come out with more sops to support and promote startups in the space, considering the fact that there are a lot of new startups in the agriculture space making a meaningful contribution to the sector.

“Support from the government in terms of funding (patient capital) and debt and a favourable policy would have helped startups scale up their activities. Such initiatives would have attracted more investors to the space, which is necessary for the sector’s revival and development. The government should have allocated some funds to the FPOs for capacity building. This is one area where FPOs need a lot of handholding,” says Rajeev G. Kaimal, cofounder and MD of payAgri, a startup that works with aggregated farmers and provides them with market and financial linkages.