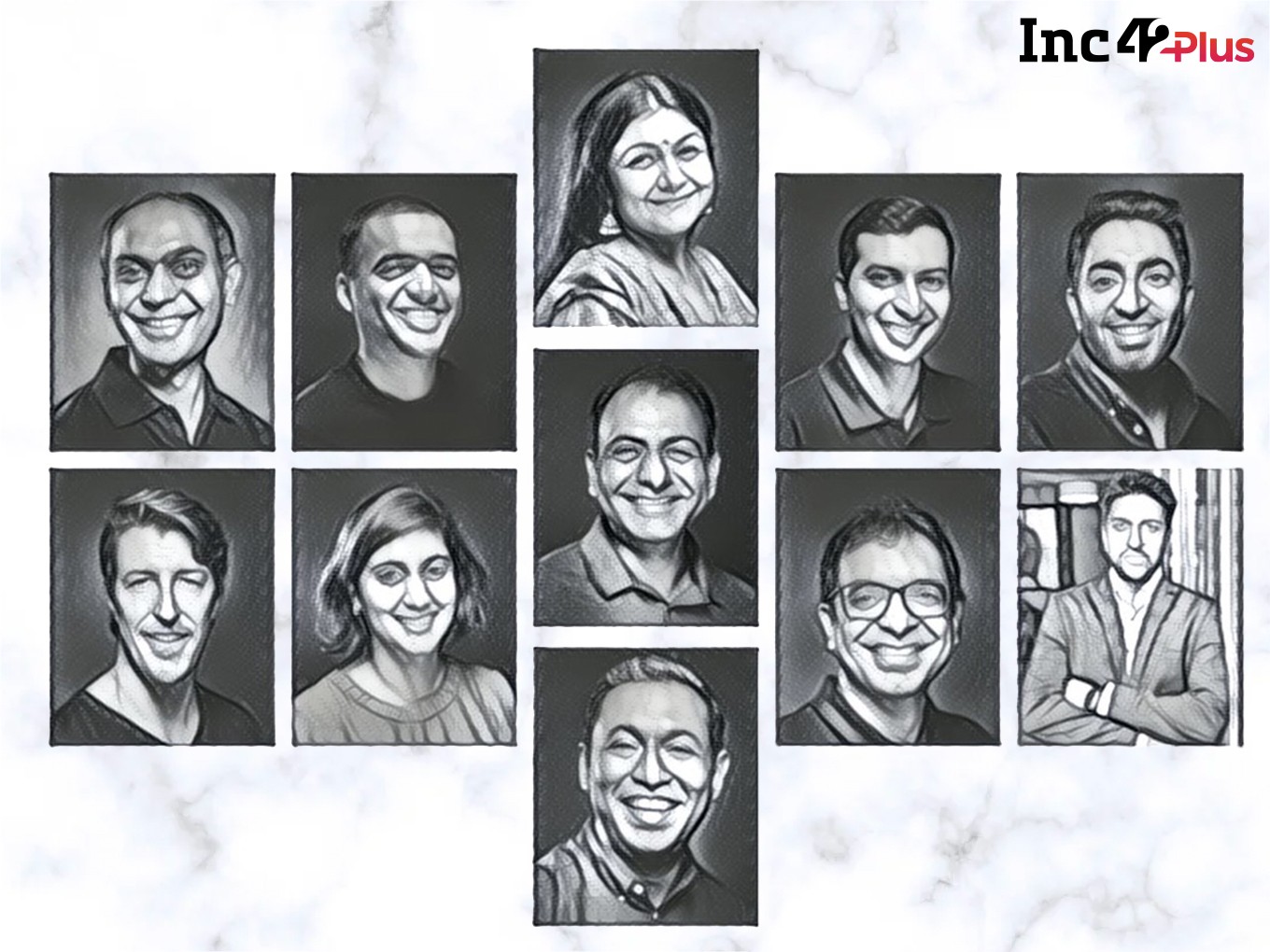 Starting as a discovery and reviews platform Foodiebay in 2008, the Zomato we know today is a global foodtech empire despite the high-profile exit of cofounder Pankaj Chaddah

Unlike Swiggy’s acquisitions concentrated on penetrating deeper into the Indian market, Zomato expanded and took its presence to across 10,000+ cities around the world at one point

So, who are the people pulling the strings at this global foodtech giant and how have the years of acquisitions, subsidiaries and new product launches served Zomato’s bottomline?

Known for not mincing its words, this is how Zomato jumped out of the frying pan into the fire. Having faced months of angry clamour from restaurants over its discount-heavy model, lack of data transparency and creating a forced dependency on delivery for restaurants, Zomato weighed into a battle that many believe it should have steered clear of.

But if there’s ever been a firebrand startup in the Indian market, it’s Zomato. While the food and religion controversy died down after a few weeks, Zomato continued to see push-back from restaurants over not only its deep-discounts policy but also for its Gold subscription and Infinity Dining model.

Since then, Zomato has claimed that a majority of the restaurants that it has partnered with for Gold — which is now called Zomato Pro and completely revamped from free food or drinks to discounts — are satisfied with the changes made by the company to the discounts and loyalty programme policies. In November 2019, founder and CEO Deepinder Goyal said 40% of the restaurant partners are happy with Zomato for limiting Zomato Gold and nearly a quarter of the partners appreciated Zomato keeping an eye on abusive or low-rated customers.

And then, 2020 came around with its multiple complications for businesses, turning the focus of the foodtech giant completely. With consumers naturally willing to pay a little more for the convenience of delivery during nationwide lockdowns, Zomato and other food delivery startups have seen average delivery costs come down and margins improve slightly.

With a focus on the B2B sector and improving the unit economics, it’s a new Zomato for 2020. One that’s slightly conservative, but still making the unconventional moves.

Over a thousand foodtech startups have mushroomed since the idea of online food delivery and discovery germinated in the 2000s. Zomato is among the oldest foodtech players in India and was launched after Burrp. Both startups began by listing restaurants and aggregating reviews from users. But Burrp, despite being the early mover and gaining traction failed eventually due to the lack of focus and over-reliance on ad revenue. On the other hand, Zomato seems to have gone from strength to strength.

Starting as a discovery and reviews platform Foodiebay in 2008, Zomato has over a dozen acquisitions under its belt. The company has been quick in releasing new products, and pivoting its business model with the changing times. 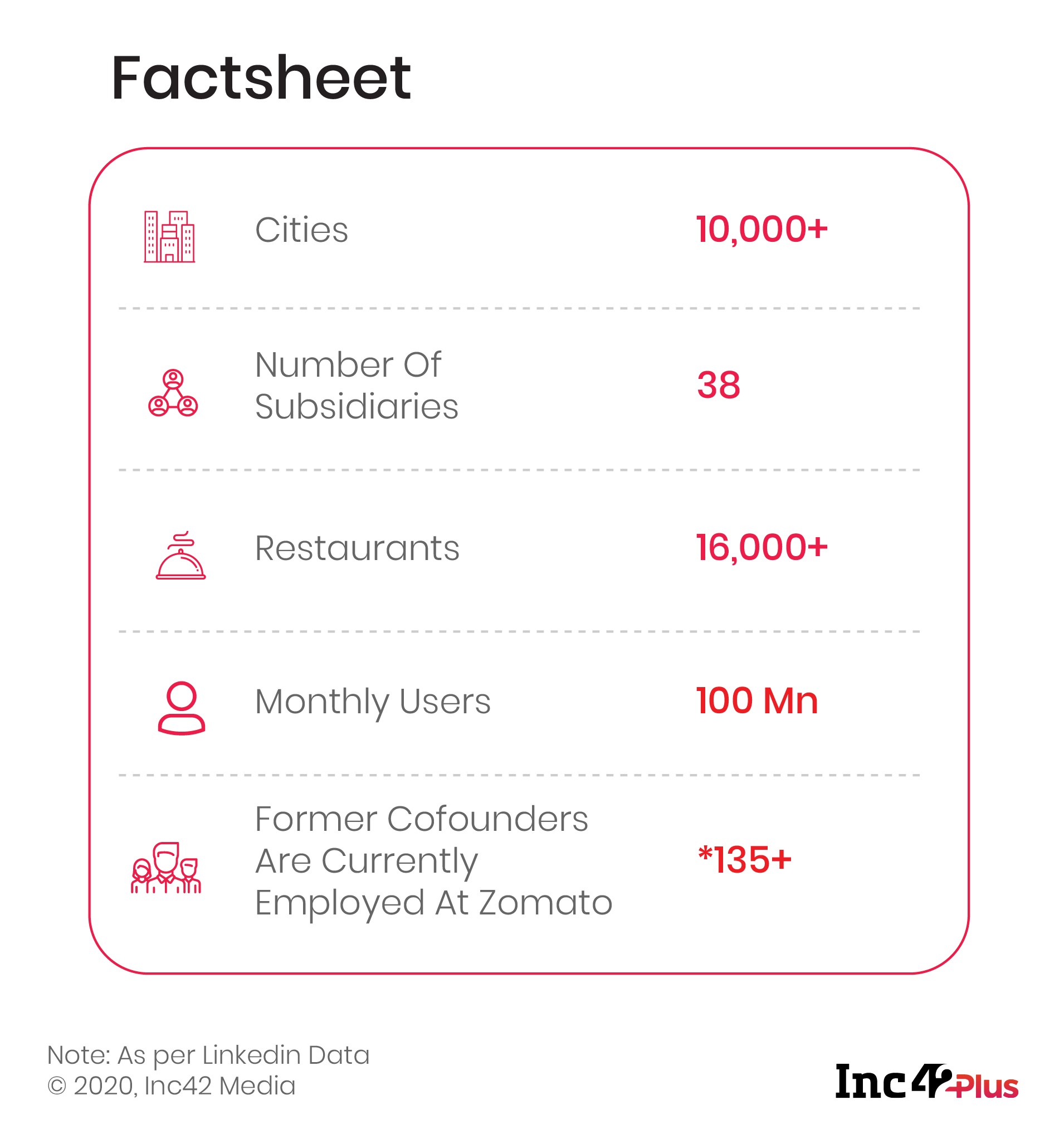 Having raised more than $850 Mn from investors including Alibaba’s Ant Financials, Zomato turned into a unicorn more than a decade after its inception, in 2018. And by then, it had already become a household brand in India’s bustling cities. Engaged in a battle of supremacy with another homegrown and cash-rich foodtech unicorn Swiggy, Zomato has expanded into the B2B realm with its restaurant-focussed supply chain platform Hyperpure. And while Swiggy claims to have a deeper penetration into the Indian market, Zomato is definitely not far behind with its multifaceted revenue models and unique approach to marketing and branding.

The company has been on an experiment and expansion spree with mixed success in the past few years. Zomato, which registered over $62 Mn in revenues in FY 2018, garnered $192 Mn in FY 2019 and then $394 in FY 2020, is expected to witness downfall this fiscal year with $41 Mn in H1 FY 2021. The company, however, has successfully managed to curb the EBITDA loss,  and expects to turn positive by yearend.

With an eye on reducing its food delivery costs and a bigger focus on its B2B model this year, Zomato is looking to overcome the slowdown effects of the pandemic by eyeing the big opportunity for contactless dining in the retail market like foodtech players Dineout and POSist.  Other challenges for the company include the entry of companies like Paytm in this segment. 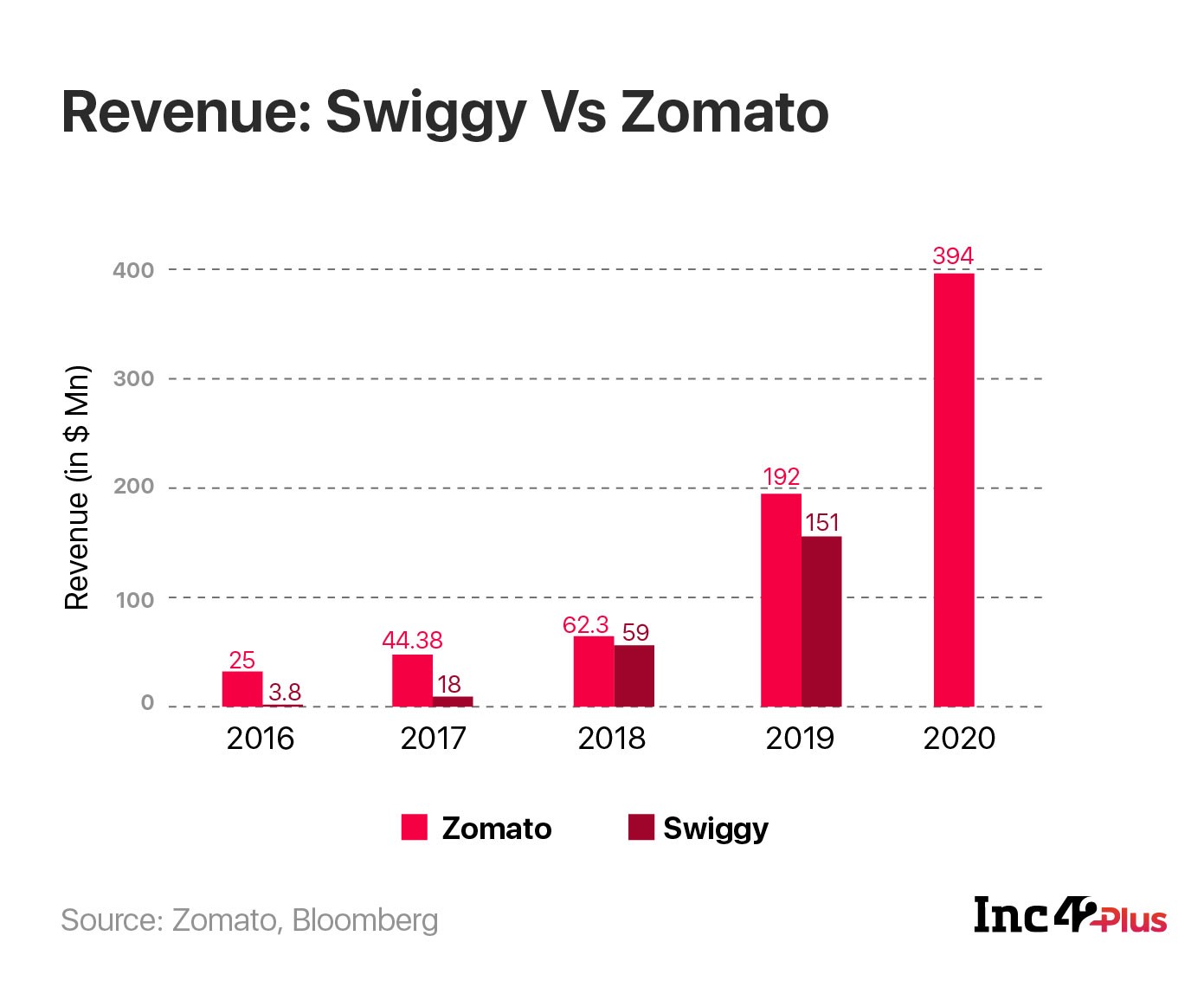 Having laid off 540 employees in light of the Covid-19 pandemic, the company has reduced the monthly burn rate to below $1 Mn and expect its revenue to land at ~ 60% of pre-Covid peaks ($23 Mn per month). The company in its July report estimated another 3-6 months’ buffer time it could make a complete recovery.

Goyal, The Only Constant

Deepinder Goyal has been the only constant in Zomato, being the CEO of the company and leading it through the years. Otherwise, the company has reshuffled its leadership team multiple times since inception, with a new power structure created in recent months as per our sources. 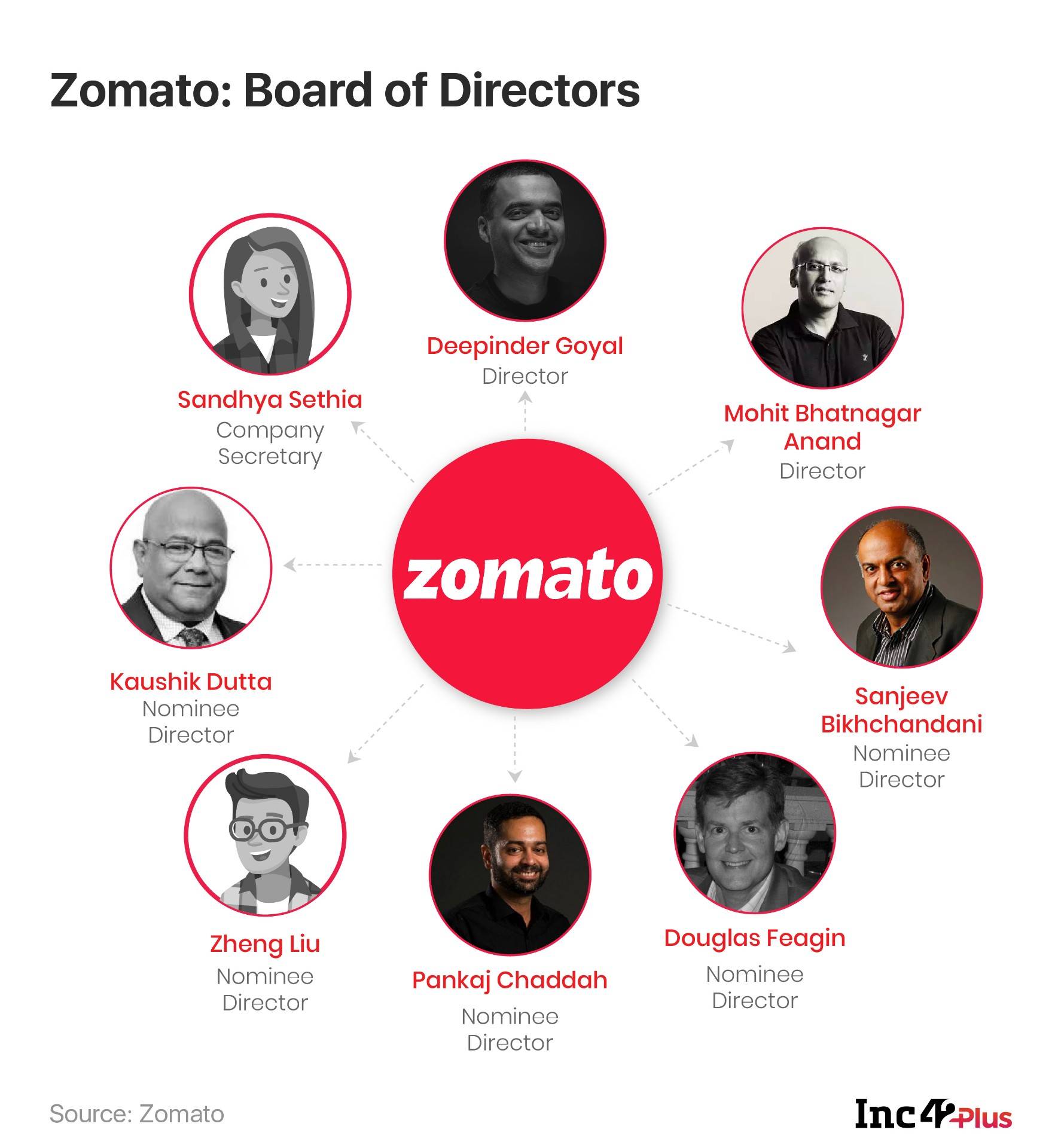 While the original cofounder Pankaj Chaddah resigned from Zomato back in March 2018, the company has since added two more cofounders — Gaurav Gupta, COO and Mohit Gupta, CEO, food delivery — to its team.

Though Chaddah continues to be a part of the board, his exit from the leadership team was seen by many as a way to clip his wings. 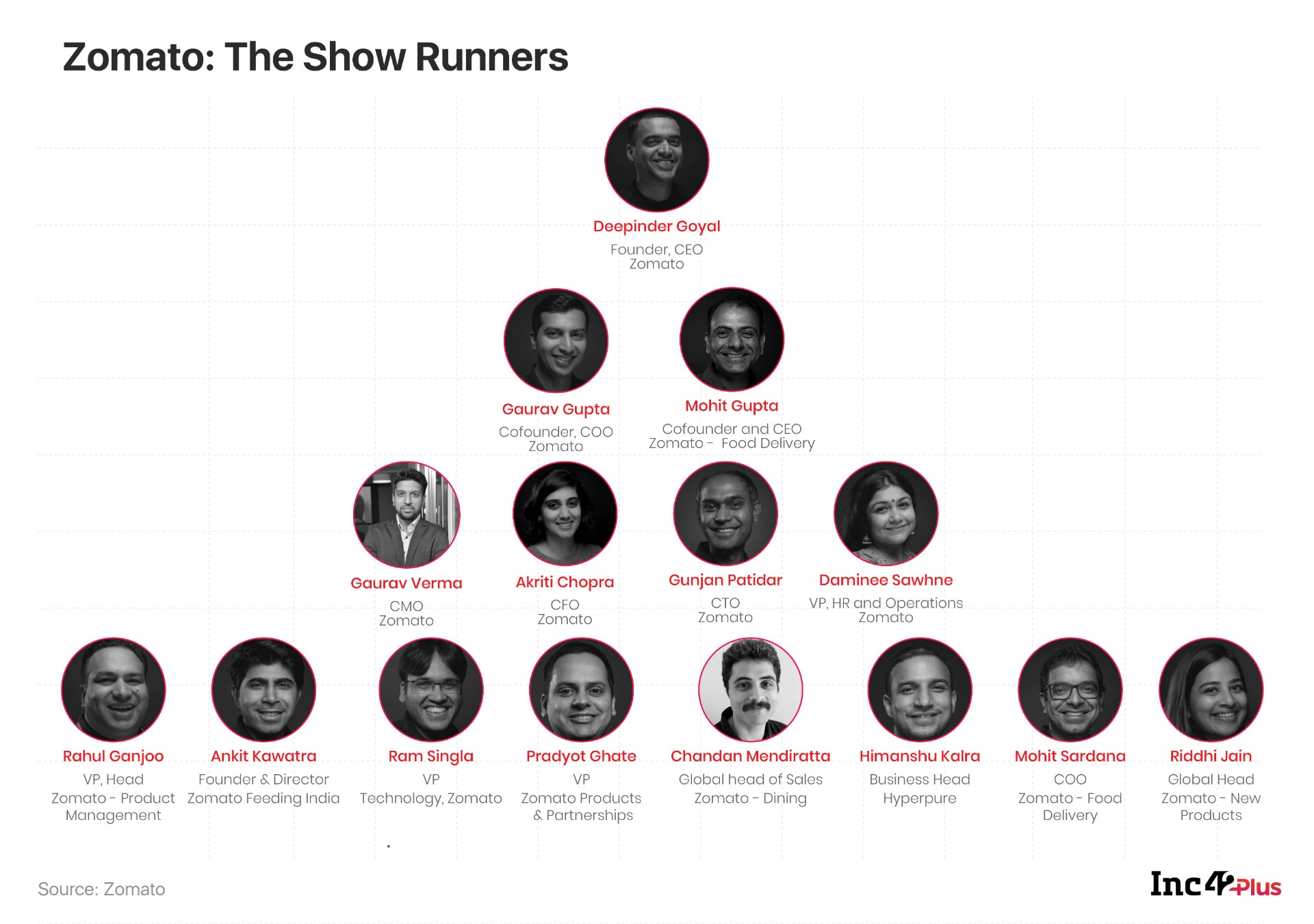 As seen in the Inc42 Plus analysis on the upheaval in hiring and recruitment after the pandemic set in, the appointment of cofounders is being seen as a retention tactic by many late-stage and growth-stage startups. The likes of Pesto among others have also used the same tactic in recent months.

Over the years, the number of women in the leadership team has decreased. Speaking about the gender diversity at Zomato, Goyal wrote in the annual report 2019,

“The number of women leaders at Zomato has dropped from 45% to 15% over the last two years. Yes, that bad. We are committed to taking that number up in the near future.” 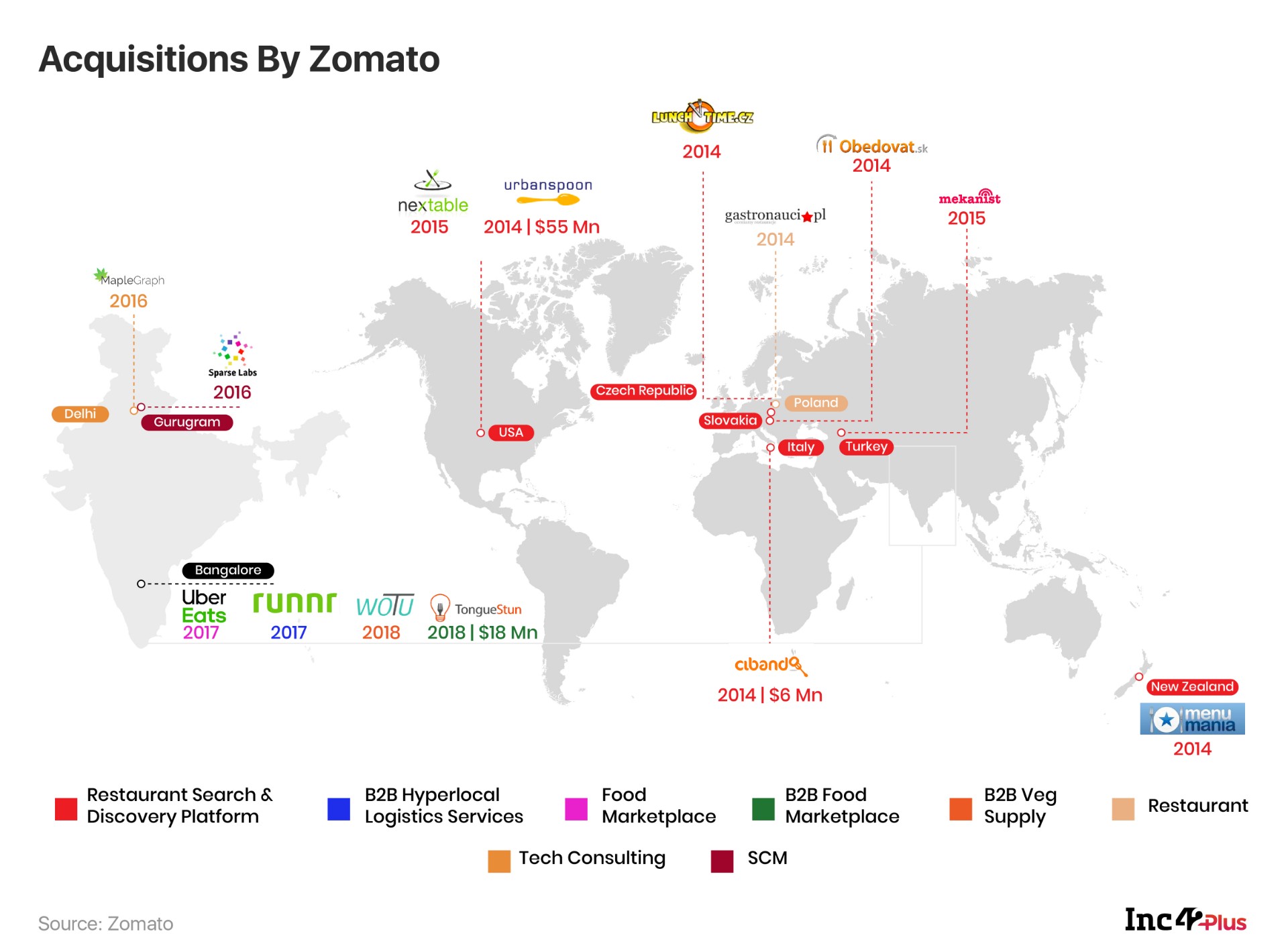 Zomato has so far acquired 13 startups around the world, and with its many subsidiaries, it has presence in every continent, except Antarctica.

Its acquisition tally could have gone up to 14, but in June 2020, Zomato pulled out of the deal with Gurugram-based drone startup TechEagle Innovations, citing the impact of the pandemic. Interestingly, the company had gone ahead with the UberEats deal at $206 Mn, despite the pandemic.

Zomato has also registered new subsidiary companies in India such as Zomato Entertainment Pvt Ltd in 2018, and Zomato Local Services Pvt Ltd in 2019, indicating the company’s long term planning towards grocery delivery, which it may have scaled back for the time being. 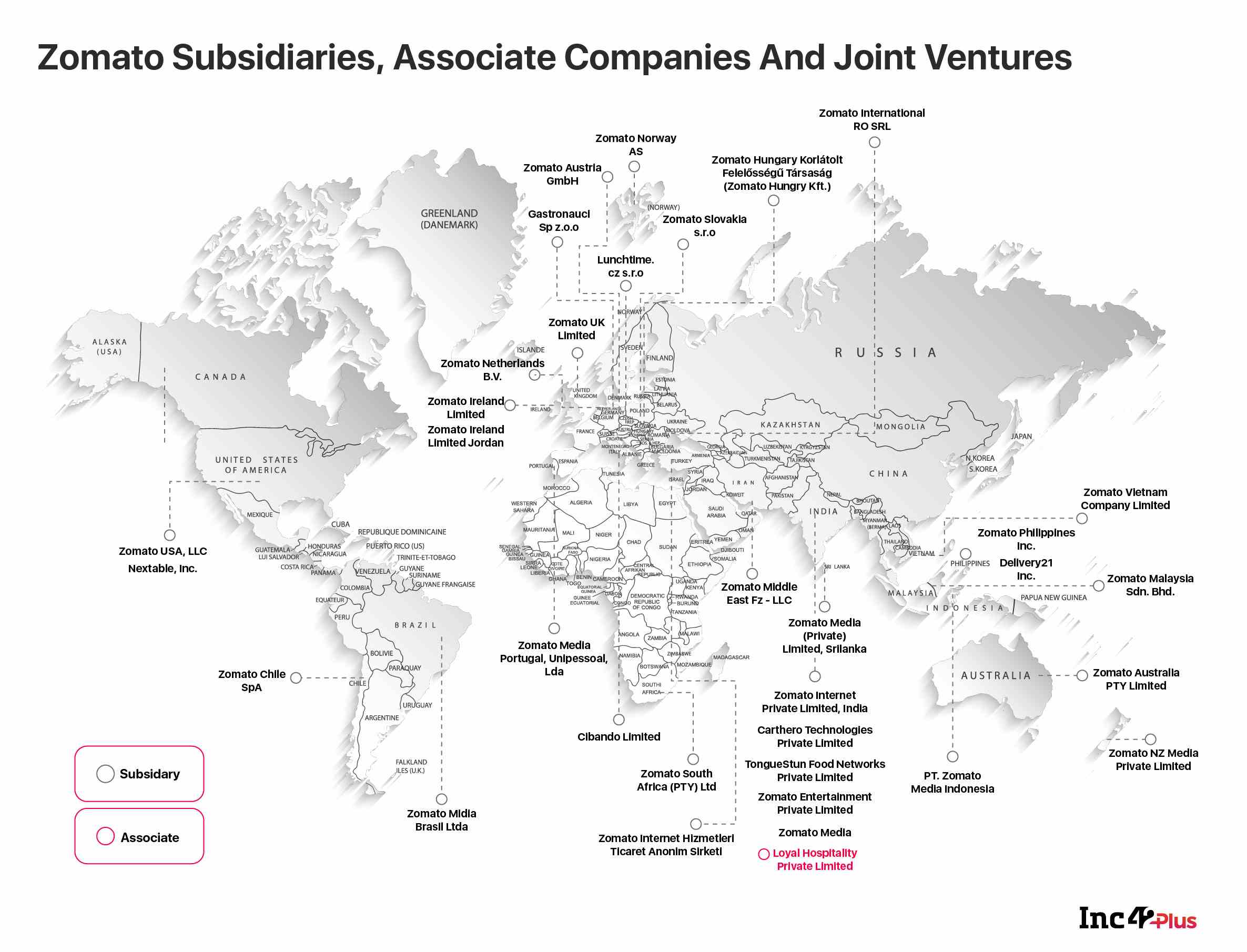 It also signals Zomato’s intentions of focussing on live events, entertainment, gaming or related services — some of which it has already put in motion such as Zomaland, its multi-city food and music festival.

Circling The Demand And Supply In Food

The company has also doubled down on its focus on Hyperpure, the B2B vegetable and grocery supply service for partner restaurants as well as cloud kitchens. This not only helps Zomato maximise the revenue per restaurant, but is a key value proposition for potential cloud kitchen customers, where Zomato provides access to kitchen facilities and food delivery to business owners. The company plans to cover 18 cities in 2020 through Hyperpure.

Launched in January 2018, Zomato Gold was meant to increate customer retention by letting users avail free drinks or food when dining out or extra discounts on delivery orders. Additionally, Zomato also added discounts that could be booked through the app without ‘unlocking’ Gold at the restaurant. However, this was met with mixed reviews with a significant number of restaurant partners as well as consumers criticising the model on multiple accounts.

“We have signed up ~50% more partner restaurants on Zomato Pro than what we had on Zomato Gold – across dining out and delivery.” — Zomato cofounder and COO Gaurav Gupta

Did Experiments Cost Zomato Vs Swiggy?

Many observers speculated that a big reason for Burrp’s demise was that it was investors running the show instead of letting the founders set the roadmap and vision — this hasn’t been the case for Zomato. In the case of its chief rival Swiggy, investors have been more favourable in infusing mega funds. Most recently, Zomato has had to review some of its existing fundraising plans too thanks to the changes in India’s FDI rules pertaining to investors from China, which has impacted Zomato investor Ant Financial.

Founded in 2014, Swiggy has so far raised over $1.6 Bn while Zomato has raised close to $850 Mn, despite being the early entrant in the game. But Swiggy does one thing — food delivery notwithstanding its experiments with hyperlocal and grocery in the past few months — and that’s perhaps why investors love the company. A Swiggy investor told Inc42 on the condition of anonymity,

“Zomato experiments too much. Frankly, it’s absurd to go to the countries like the US to compete with cash-rich companies instead of expanding and penetrating the deep Indian market where there is hardly any competition.”

In the past few years, Zomato seems to have learnt its lesson but only after making the mistakes. Amid rising losses, the company had to roll back its operations from 9 countries by 2016 from 23 overseas markets. This included the US, the UK, Sri Lanka, Ireland, Chile, Canada, Brazil, Italy, and Slovakia.

By the time Zomato started increasing its focus back on the Indian market, it had lost some of the market to Swiggy. According to reports, Swiggy holds 60% revenue share with almost 45 Mn monthly transactions.

After Foodpanda’s failure and Zomato’s acquisition of UberEats India, the Indian market is a duopoly in the food delivery segment. The UberEats India deal has brought Zomato back to the leadership position, however, it will be interesting to see how it responds to the fast-changing Indian market where 1.9 Cr salaried people have been reported to have lost their jobs and where food delivery in megacities has fallen as many migrant skilled workers and IT talent moved back to their homes.

Despite numerous attempts on our part, Zomato decline to participate in this story and did not respond to any of our queries.

Before Covid 19, Zomato had aimed to be EBITDA positive by 2020. However, as the pandemic has forced over 25% of restaurants across the country to permanently shut down their operations, and with the supply chain being badly hit, the company expects another 3-6 months before it could recover to the pre-Covid-19 revenue. 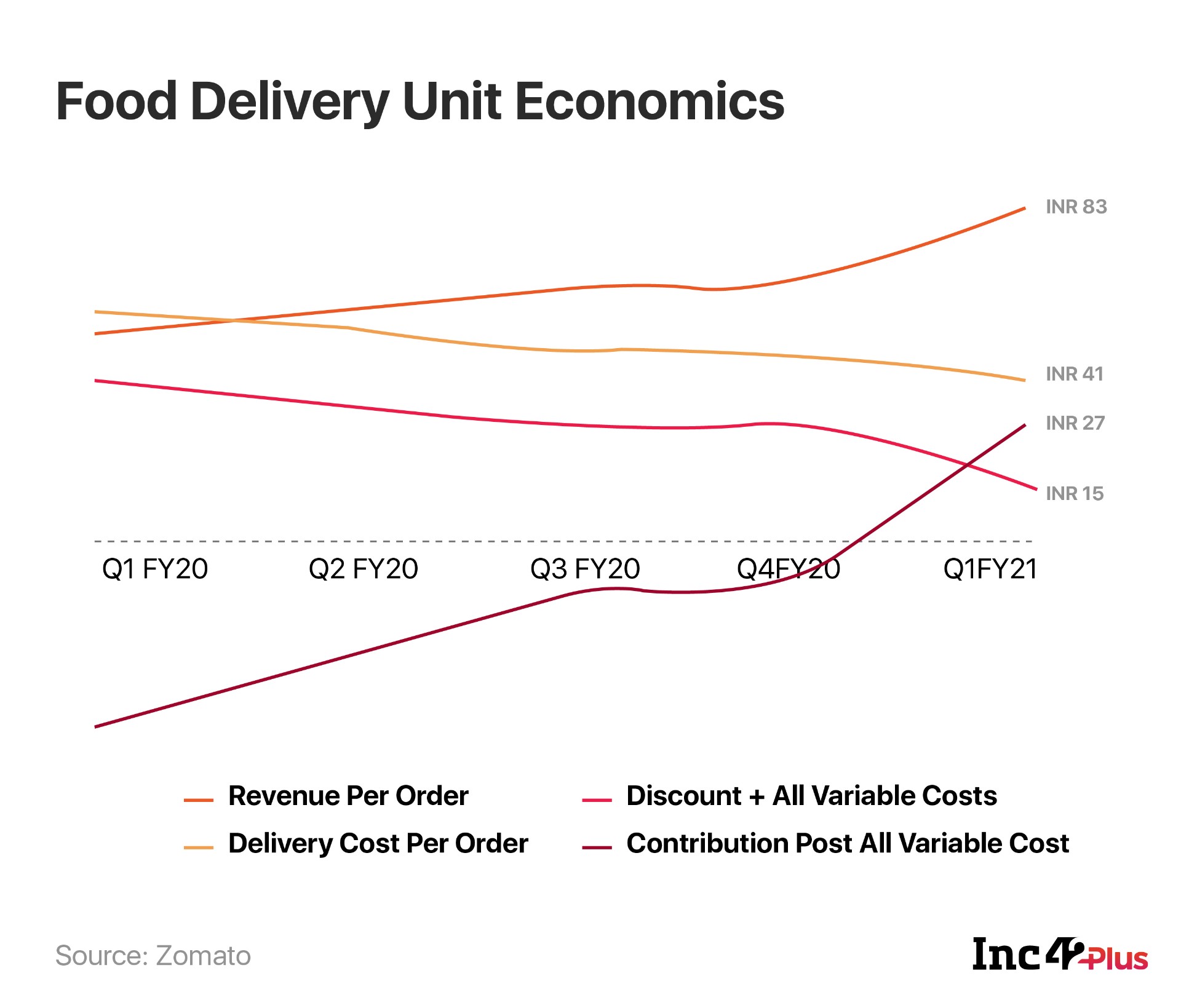 “While COVID-19 has impacted the size of our business, it has accelerated our journey to profitability. In terms of the size of the business, COVID-19 has set us back by a year or so – but a year is only a small blip when you are building a company for the next 100 years.” — Deepinder Goyal

Despite being for so long in the game, and valued at $3.5 Bn Zomato today is not in the same position in the Indian foodtech space as enjoyed by Flipkart and BYJU’s in ecommerce and edtech.

Could this be because of the company’s choice to expand globally? After all, despite its Walmart provenance now, Flipkart has focussed squarely on the Indian market, whereas BYJU’S has begun to enter global markets only after consolidating its position in India. Even its closest rival Swiggy has not bothered to expand like Zomato did. Has Deepinder Goyal, the only constant in Zomato, been too adventurous all these years?