The overall funding for May was the lowest all year at just $1.6 Bn raised in the month, more than 50% lower than the $3.4 Bn raised in April

When looking at just the average ticket size, we can see a near 2X growth at the seed stage compared to last year

Seed funding will not see a major impact from the so-called funding winter as per investors, because such startups are typically more agile, leaner and offer a more attractive upside after the market recovers

Funding winter, cash crunch, war, recession, over 8,500+ layoffs — the past few weeks have been pretty rough for the Indian startup ecosystem, but one area that’s somehow managed to buck the decline is the seed stage funding.

As per startup funding data for May 2022, the overall funding in the month was the lowest all year at just $1.6 Bn raised in the month, more than 50% lower than the $3.4 Bn raised in April. But seed-stage funding has seen more than 4X growth in terms of the total capital invested and a sizable 59% jump in the number of deals.

Out of a total of $201 Mn raised at the seed stage, there was one outlier which was the $100 Mn round for Lenskart’s house of brands Neso Brands. Excluding this, the total funding at the seed stage in May this year saw over 2X growth in comparison to May 2021.

Over $42 Bn was raised by Indian startups last year and the beginning of the year was healthy as well, with an average of $3.6 Bn raised per month till April 2022. But this has now seen a sharp decline.

Since then, policy measures in the US and India in relation to the central bank lending rates have chilled the atmosphere and besides this, investors at-large have become sceptical about backing loss-making startups. So the focus has turned to profitability and sustainability, which has resulted in some austerity in investments and cutbacks at startups. But this does not seem to have changed the seed stage funding outlook for Indian startups.

Here’s a snapshot of the seed-stage funding data for May 2022, before we jump into the analysis, and get the perspective of early stage investors as far as the funding winter is concerned. Diving deeper into the granular data for seed funding, we can see that more and more seed-stage startups are raising funding and the average ticket size has grown significantly when taking a look at the May performance in 2020 and 2021 against this year. 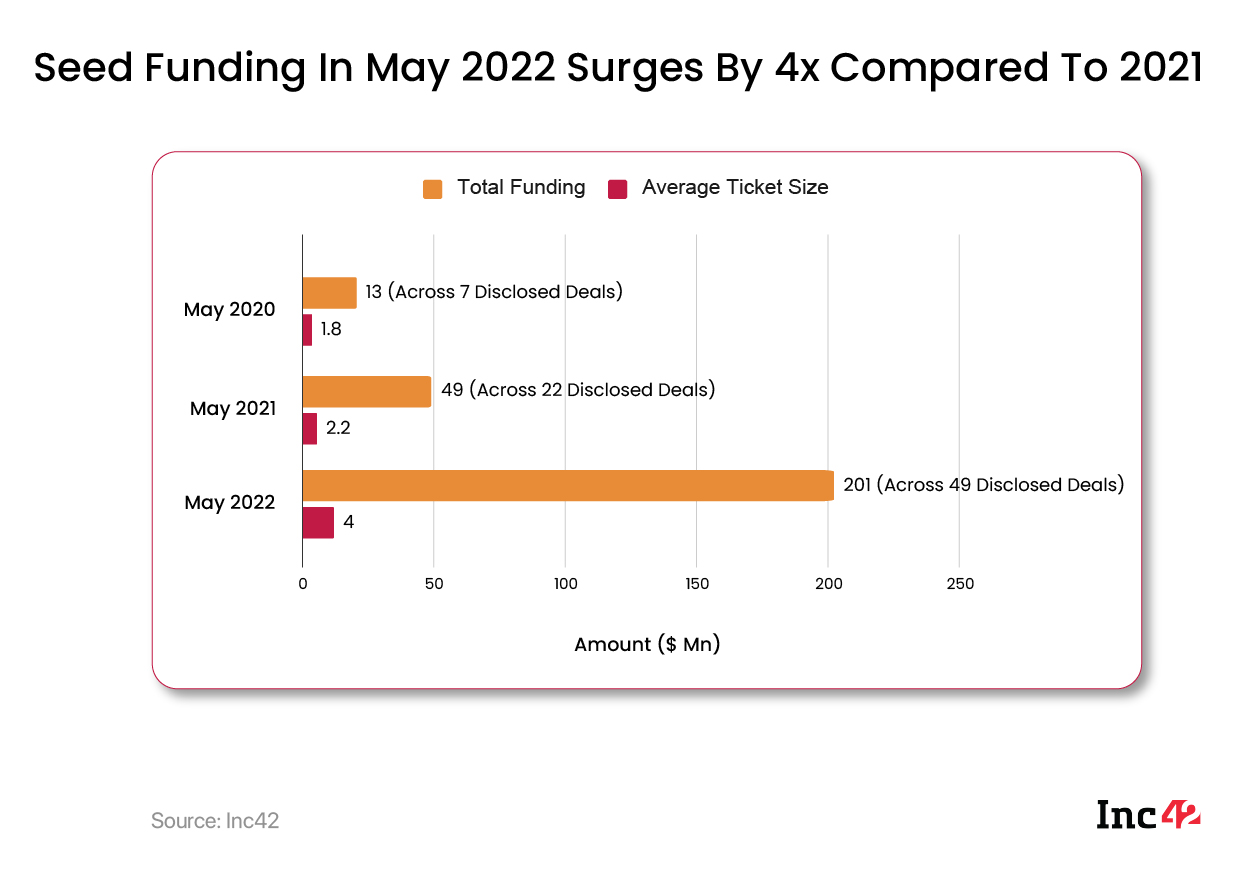 Of course, a lot of this growth seems to be exaggerated by market conditions and the funding outlook for growth and late-stage startups. In 2021, the investor FOMO and the higher liquidity sloshing around in the capital market had driven large rounds for growth-stage and late-stage ventures and an all-time high annual funding tally, but this time around, investors, particularly large VCs, are playing it more cautiously.

Mirroring the peak in seed stage funding in India, seed funding saw a record high in North America in Q1 2022, as per Crunchbase data, with a whopping $4.5 Bn invested in such pre-seed and seed rounds in North American startups, with Web3, metaverse and NFT startups driving this boom. The data for the month of May is yet to be revealed, but we expect seed funding to continue to rise globally based on what investors have told us.

Will Seed Funding Be The Winter Haven?

Without the same levels of investment at these growth and later stages, seed rounds are being seen as the outlet for whatever corpus is still left with funds. Seed funding will not see a major impact from the so-called funding winter, because typically these startups are more agile and leaner, and can respond faster to changes in the market. 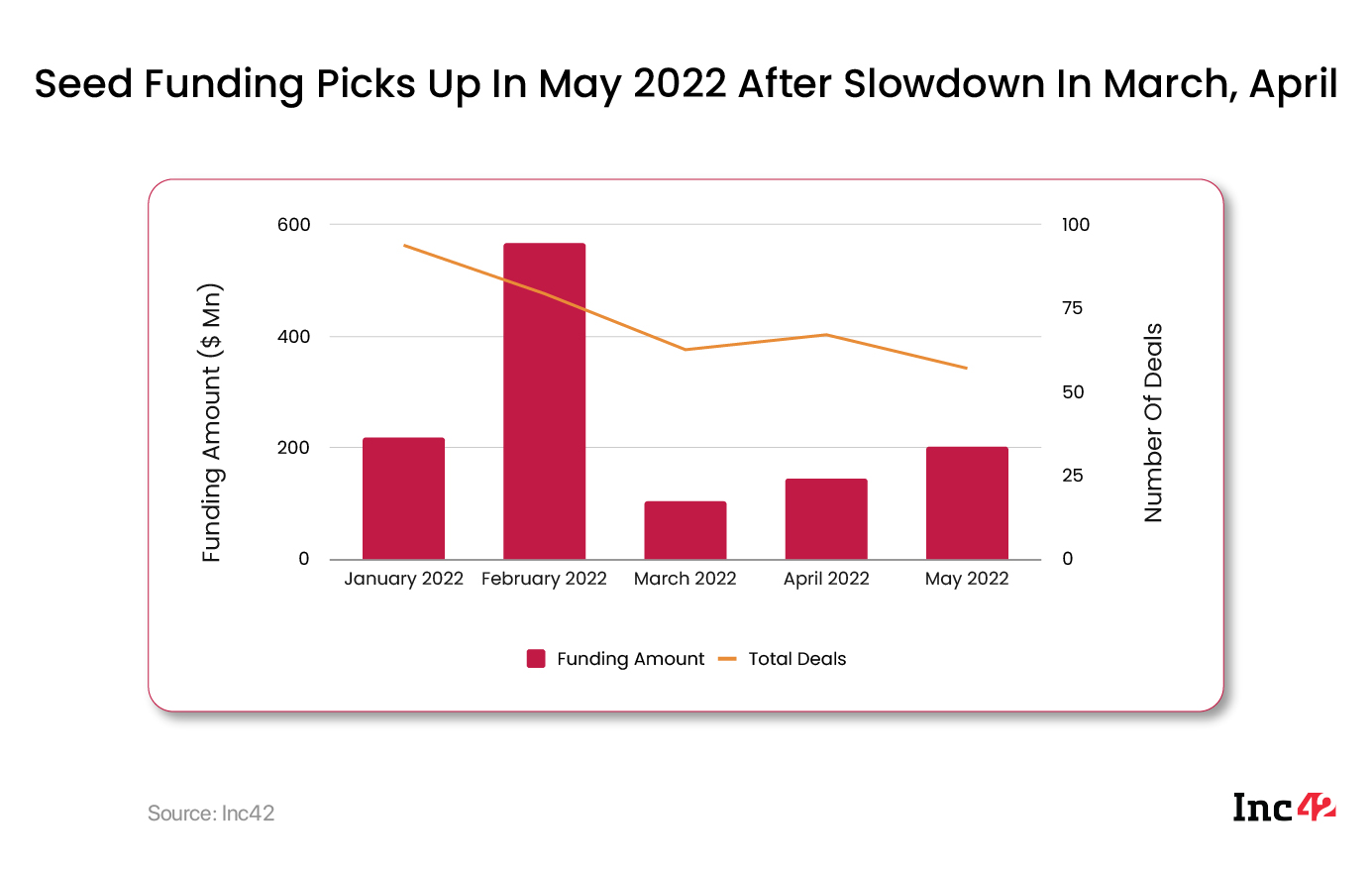 Capital raised will go somewhere and this is most likely going to benefit promising startups where investors can get a bigger chunk of the company at an early stage. Plus by the time the market recovers, these early companies with the capital backing might be in the best position to capitalise. The upside is certainly large for seed-stage bets at the moment, but of course, capital has to be smartly deployed.

As one Bengaluru-based early stage investor told us, a lot of seed rounds this year will be ‘option bets’ by long-tail investors who have the corpus for low-exposure spreads, but may not want to take large risky bets that can backfire in this down market.

These are smaller rounds or as the investor puts it, “a few millions out of a corpus of billions”.

Another pattern that is emerging is investors backing lean setups and those companies with a focus on sustainability. At growth-stage, companies are focussing on paring down and therefore will need another quarter at the very least to recover their footing.

Growth-Stage Funding On The Wane?

While many VCs have pointed out that the worst of the winter will be over in the next 3-4 quarters, the full recovery to pre-2022 levels might take till the end of 2023, as expected by the likes of BEENEXT.

Startups with valuations of over $100 Mn going all the way to $1.5 Bn might see the most adverse impact, because they are primarily looking for expansion and growth capital. This is the riskiest capital in the market currently — when even large VCs such as Tiger Global, Sequoia, SoftBank and others claim that the number of new deals might fall or that startups need to prepare for a funding crunch, the signal is clear for the rest of the VC herd.

Specifically companies that have valuations under $100 Mn will attract investors, whereas larger companies will not draw too many such investors given that the potential stake acquisition will be more expensive, and where operational or execution risks need to be mitigated with cash inflow. Then again, startups that manage to prove their fundamentals or a path to profitability might just grab a piece of the capital floating about.

As we have seen in past downturns, it is always the large listed companies that feel the brunt first as stock markets crash and this has a cascading effect on late stage startups and then the growth-stage ventures. Unicorns and other startups with large valuations have too much exposure to these ripple effect, whereas seed-stage is usually the last to fall to a downturn. Towards the end of the year, even seed rounds might slow down, but for now it is seed funding that is driving capital into the Indian startup ecosystem.