In India, adoption of EV is likely to grow with commercial vehicles rather than in passenger vehicle space

The future of mobility is clean and sustainable and it is only a matter of time that India makes a bigger splash in the global green mobility market. The World Economic Forum and Ola Electric highlighted that the Indian automobile industry is one of the fastest-growing markets globally, but it still just makes up 0.5% of the global EV market. The goal is now to come on par with China, the USA and Japan in terms of the manufacturing and sales of passenger and commercial electric vehicles.

According to DataLabs by Inc42, in 2018, India emerged as the seventh-largest manufacturer of commercial vehicles with the sales increasing up to 9.5% from 4.02 Mn units in 2017, thereby making India’s auto industry the fourth largest market in the world.

Needless to say, the two-wheelers segment dominates the market in terms of volume owing to the growing middle class and young population. More than anything, the growing interest of two-wheeler manufacturers in the rural markets is further boosting the sector to a whole new level. But what about the electric vehicle market? 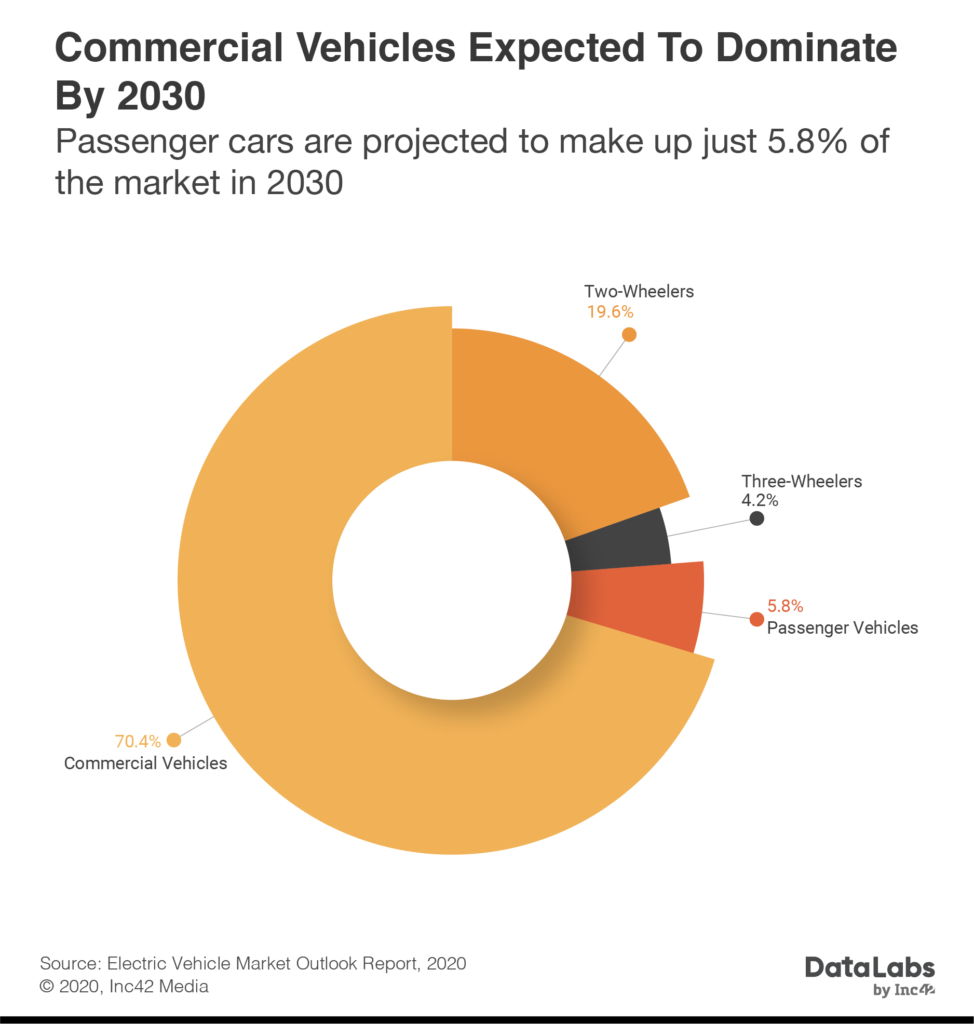 
At present, India is still in the early stages of adoption. According to a McKinsey&Company report, the electric vehicle adoption rate is less than 1%. However, over the last two years, there has been a significant development in the electric vehicle space in India with both two-wheeler and four-wheeler launches from automobile giants, local players and startups alike.  There are several factors that have contributed to this growth and many EV players believe that these factors will eventually lead to the exponential growth of electric vehicles across the country.

Lower rate of adoption of electric vehicles in the passenger cars segment would still remain a concern and needs to be addressed. The interest among consumers in the adoption of electric cars is growing multifold but the actual adoption seems to be going very slow. India has barely sold more than 8,000 electric cars in six years. Whereas, China sells more than that in two days as per a Bloomberg report from October 2019.

On the supply side, the potential growth will be driven by technology maturity, commercial availability of components, lower manufacturing costs, technical and skill availability and improved investment flow. Similarly, on the demand front, consumer expectations have also risen, significantly. For instance, people’s opinions and mindsets have also changed, and they are waiting for a no-compromise electric vehicle solution to make a switch.

At the same time, India is still tackling various challenges in terms of range anxiety, high-prices of electric vehicles (electric four-wheelers), battery manufacturing capabilities, electricity demand and lack of charging stations among others. Another chief concern is the lack of big brand EV offerings, which is a key buyer consideration in the Indian market. 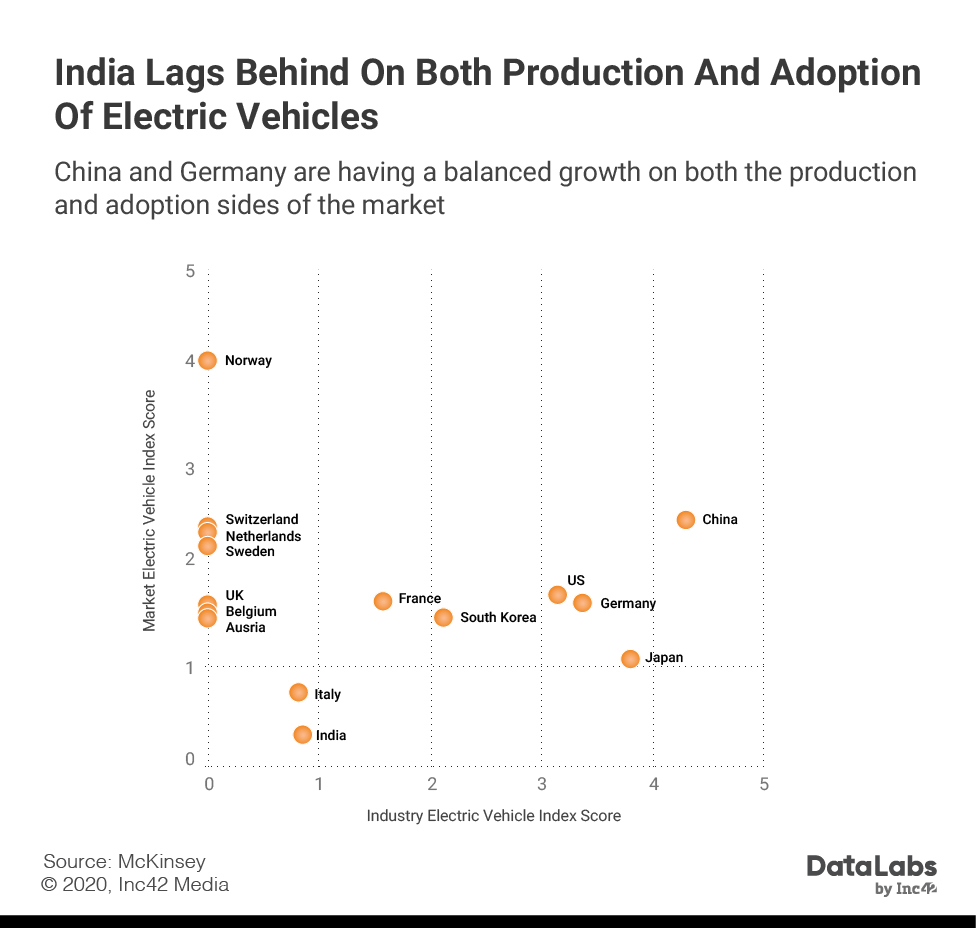 Today, the situation is gradually improving as many EV players have entered the market. The likes of Hyundai, MG Motor, Mahindra Electric and Tata have raced to take the lead in the nascent EV four-wheeler category. In the two-wheeler category, a lot of brands have emerged in the country with affordable, premium and high-power electric vehicles, including Okinawa, Tork Motors, Ather Energy, Ultraviolette, Evolet, and Ampere Vehicles among others.

Sq. Ldr. Prerana Chaturvedi, the CEO at Evolet (Rissala Electric Motors) also said that the electric vehicle market (two-wheeler segment) is growing at a very rapid pace and there are a number of key drivers that are responsible for this growth. She said, “Government incentive schemes, growing distributor and dealership network, better quality products, increased awareness and acceptance of EV by consumers are some of the key factors that are fueling the growth of the electric vehicle market in India.”

In the three-wheeler market, which occupies a majority of share in the electric vehicle market in India, Mahindra & Mahindra, Lohia Auto, Greaves Cotton among others are the leading companies. According to DataLabs by Inc42, the market share of electric vehicles is split heavily in favour of smaller vehicles, with four-wheeler cars making up just 10% of the market, and two-wheelers and three-wheelers accounting for the rest. This will only change once more manufacturers join the game and more affordable models are released.


Coronavirus And The Future of EVs


The next couple of years are crucial for the Indian electric vehicle industry as the market is poised to grow like never before. But with the coronavirus pandemic impacting almost all the sectors in India, the electric vehicle market has also been hit by supply chain problems and manufacturing disruption. The pandemic has sent oil prices crashing and at the same time, it is also putting a lot of pressure on the global supply chains for renewable energy, including power generation for electric vehicles.

According to a report by BloombergNEF, China’s electric vehicle sales are already down by 44% due to coronavirus. The report further said that the US could experience a bigger dip in its electric car market than other nations. For now, manufacturers are bullish about the market bouncing back in next quarter.

Speaking to Inc42, Tarun Garg, director of sales, marketing and services at Hyundai said that India is ushering into a new era of future and clean mobility and represents a major opportunity for the Korean giant. The company’s KONA Electric is India’s first fully-electric SUV and many such niche options are hitting the market, including the likes of Tata Nexon, Mahindra’s affordable electric SUV as well as offerings from other manufacturers.

Mahesh Babu, CEO of Mahindra Electric, also said that the Indian electric vehicle industry is a new business and the opportunity for the automobile industry is immense. Like any new sector, there are some small teething troubles that need to be resolved. However, with a strong policy like FAME II, India now has the potential to be a global electric manufacturing hub.

Further, the Mahindra Electric CEO said that electric vehicles in India are here to solve much bigger issues like rising pollution and reduce oil dependency. “Since electric vehicles have a lower cost of operations, India is a very unique market as it is easy to attract fleet operators, public transportation and shared mobility platforms, initially. We are very much aligned to take electric mobility to masses,” Babu asserted. 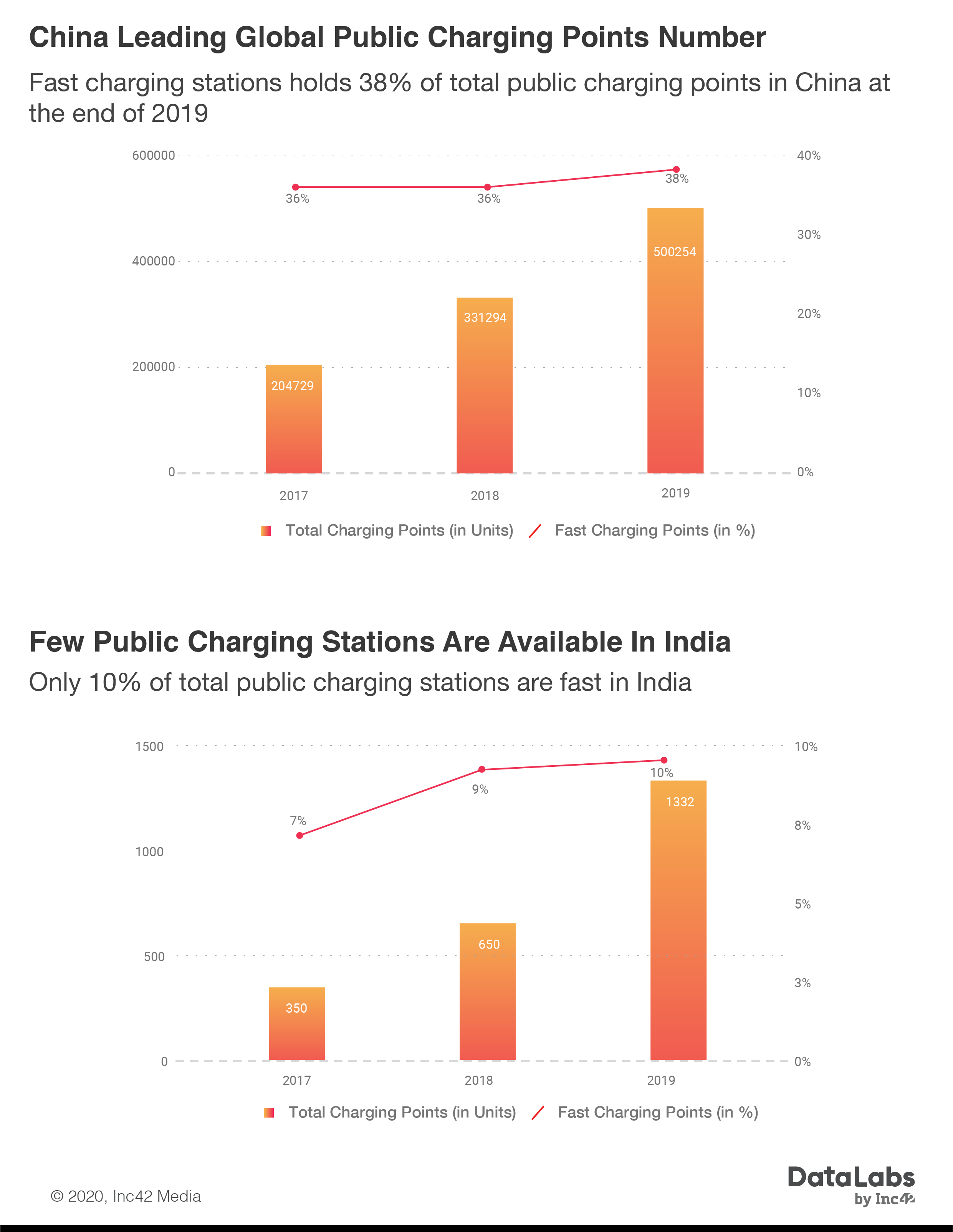 According to BIS Research, the electric vehicle market is expected to grow at CAGR of 43.13% between 2019 and 2030. Akshay Kashyap, founder of battery solutions provider GreenFuel Energy Solutions said that the electric vehicle industry will follow a J-curve in the coming years and will suddenly shoot up after 2020-2021.


A big push will come from infrastructure development. This will help the automobile industry to produce EVs for mass consumption, said Hyundai Electric’s Garg. “Overcoming range anxiety will be key in the success of the EV market in India,” added Narayan Subramaniam, cofounder and CEO of Ultraviolette Automotive, which is developing one of the few high-performance electric two-wheeler models in India.


Besides providing significant range through battery improvements, a network of energy stations would be needed to solve consumer anxiety. While the industry is looking at a collaborative approach, India needs much more than that, and the country needs to aggressively build an EV ecosystem that embellishes the road towards a clean and sustainable future. Today, the market is at the verge of maturing thanks to the continuous support from the government across India.

Jeetender Sharma, MD and founder of Okinawa, said that the government has been pushing the EV industry to the best of their efforts. It cannot be denied that government funding, subsidy and incentives have helped fuel the demand of EVs in the market. He further said that consumers are also understanding the fact that EVs are not only environment friendly but also economically more viable in the long run. “We have been working relentlessly towards spreading awareness and breaking myths associated with EV performance,” he added.