Indian automotive sales across segments are dominated by the established players

With established players also venturing into the EV segment, startups need to shore up brand recall

When it comes to influencing the customer decision-making process, brand value has always played a vital role among Indian consumers. In the context of automobiles, Indians generally hold the big automakers in high regards, especially the ones that make affordable vehicles for the mass market. This indicates how much influence the brand image has on the decision-making process of the consumer.

Since the post-liberalisation (1992 onwards) era, the automobile market in India both in the two-wheelers and four-wheelers segment is largely dominated by the likes of established automakers who have been in the market for a long time.

In 2018, Maruti Suzuki had 51% market share in the four-wheeler passenger vehicles, on the other hand, the two-wheeler segment was dominated by Hero MotoCorp (36.2%) and Honda Motorcycles (27.2%) which combined nabbed 63.4% of the total market share. In addition to their higher brand recall and established supply chain, the other major advantage these industry leaders have is their manufacturing expertise in combustion engine manufacturing.

Over the years the global push towards adoption of clean mobility has fueled the growth of new-age automakers who are experimenting with electric vehicles in both the passenger and the commercial segment. This new wave in the market has facilitated the growth of electric mobility and the EV startup ecosystem.

As per DataLabs by Inc42 estimates, EV-focussed startups in India who have raised a combined funding worth $601 Mn between 2014 to 2019. But with the lack of supporting infrastructure and lower tech-readiness among the Indian masses choosing the right target audience can be a key aspect for tackling established automakers who have started venturing into the electric vehicle segment as well. 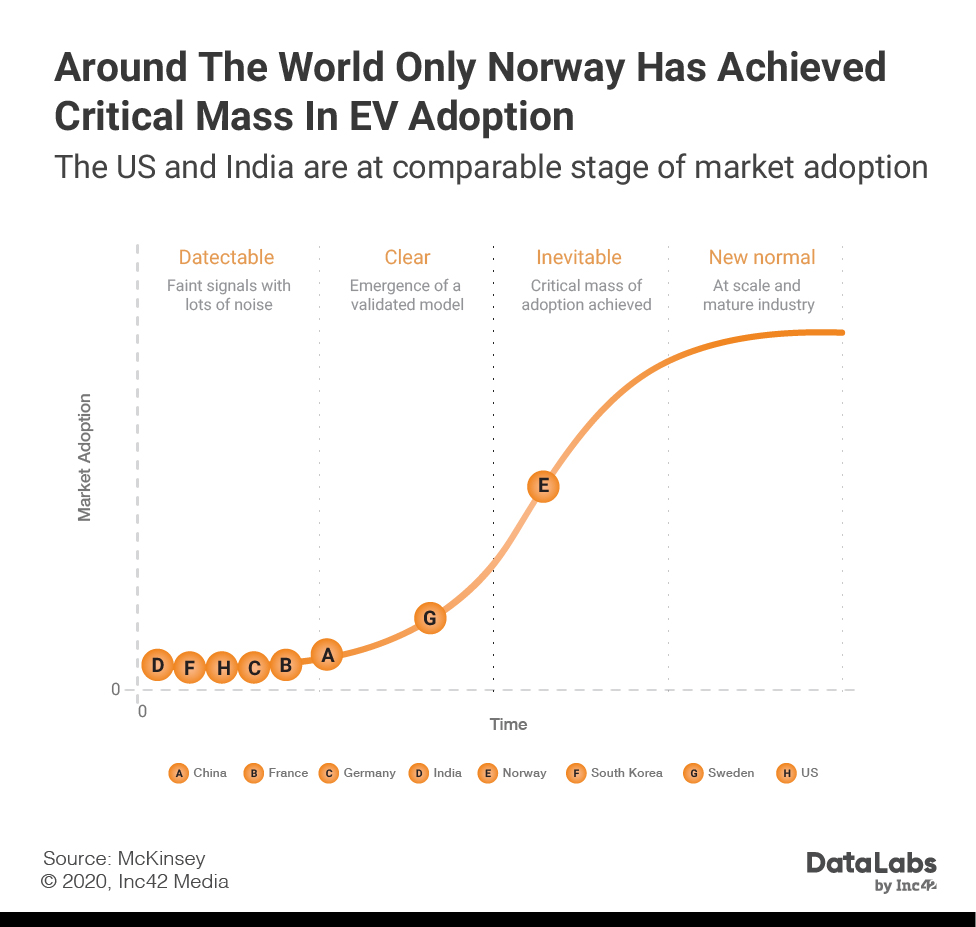 Apart from being at the same stage in the context of market adoption, another similarity between the US and Indian automobile market is the dominance of domestic players on the auto sales— in 2019, General Motors (16.9%) and Ford (14.1%) had the highest individual share in the total sales of passenger and light commercial vehicle segment.

Coming to the buyer profile, a recent study (N=35K, across 20 countries) conducted by Deloitte concluded that 41% of the automobile consumers will prefer to shift from the combustion engine vehicles to hybrid/fully electric vehicles, surprisingly the same per cent in the context of India was 49. This ascertains the fact that the awareness of EV in both countries is abundant. 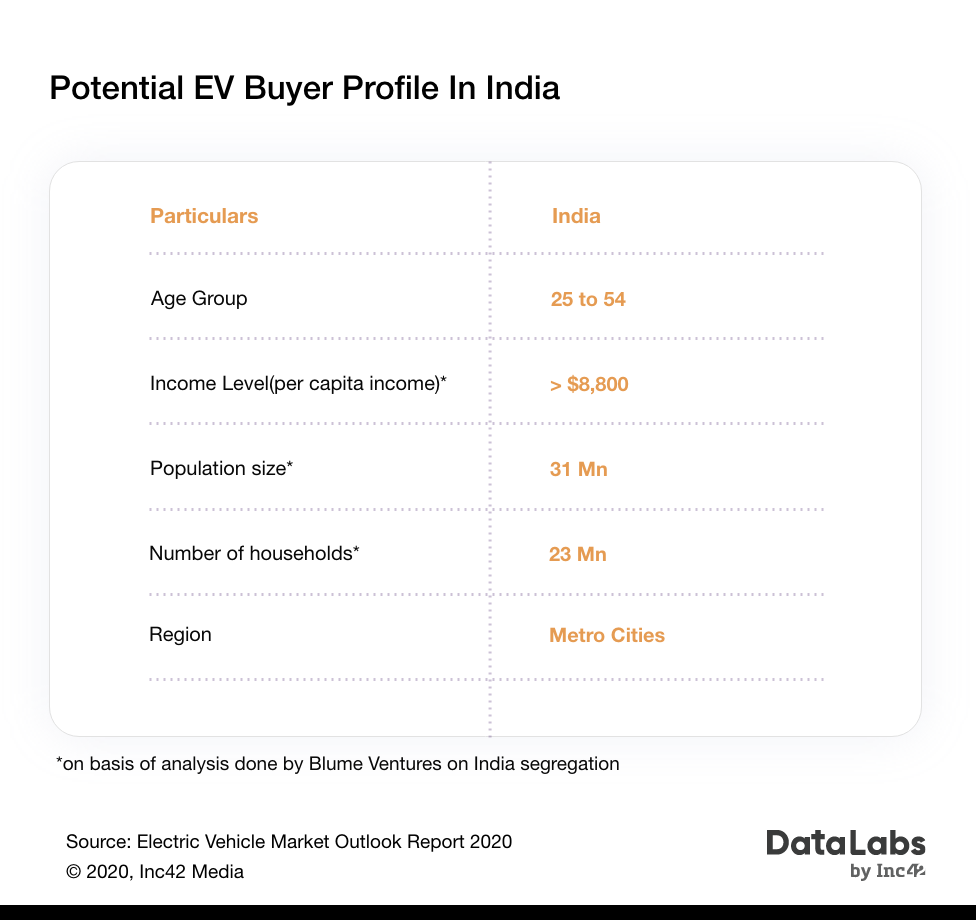 Another study on the US automobile buyers concluded that in 2020 the age group which is most likely to purchase an electric vehicle is between 25 to 54 years of age, with 46% of the respondents in favour. On the other hand in the context of hybrid electric vehicles, the same age group accounted for 54%.

Going further, when we look at the ownership of Tesla cars, the same age group (25 to 54) accounted for 45%. In the context of India when we look at the total population (2020 UN estimates) who are in the same age group, the number stands at approximately 571 Mn which would make 41% of the total population in 2020. But given the varied income level across the country (with a Gini coefficient of 35%) only the consumers with per capita income above $8,000 would be the most effective target audience for electric vehicles makers in India.

How Startups Can Gain A Competitive Edge 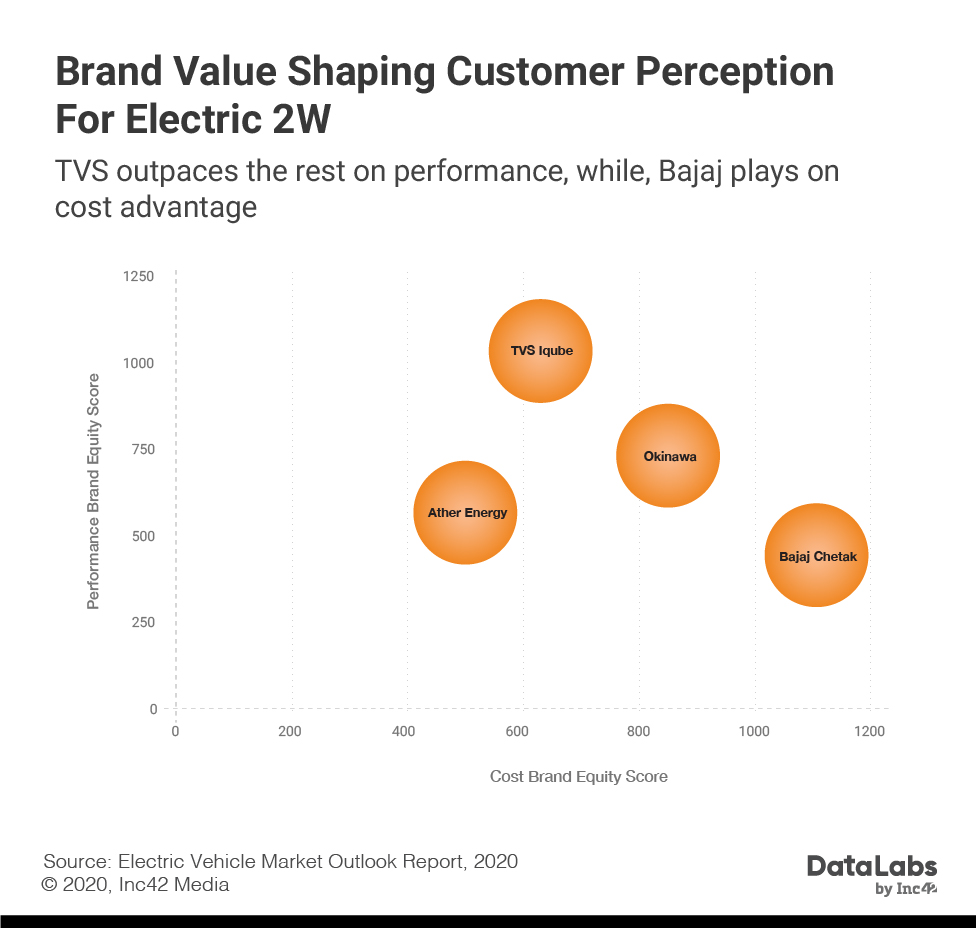 As per DataLabs analysis done on the data provided by Clootrack, brand recall is playing a major role in shaping the consumer perception both in the 2W and 4W (passenger) segment. As visible from the graph above in the electric two-wheeler segment, TVS and Bajaj have a higher recall in the consumer’s mind compared to startups. The same is seen in the context of 4Ws in the Electric Vehicle Market Outlook Report 2020. In order to gain an upper hand in the market, the startups can focus on newer ways to boost brand awareness.

Similar to Tesla which focused heavily on providing advanced technology-enabled features in its cars such as connected applications, auto-raising suspensions and advanced parking sensors played a vital role in giving the car a competitive edge over its counterparts which included some of the major global automakers. Indian EV startups can do the same, as demand for autonomous and connected applications for vehicles in India is abundant. As per the 2020 Global Automotive Consumer Study, 80%(highest among other surveyed countries) felt that increased vehicle connectivity will be beneficial.

In order to increase brand equity, the visibility of the brand plays a significant role. So rather than spending large amounts of capital on traditional marketing methods, the EV startups in India can leverage new-age marketing channels like YouTube, social media and other internet services to launch guerilla marketing campaigns which would boost their brand visibility among the target audience eventually impacting the perceived brand equity in a positive way.

In addition to fuel efficiency, the availability and quality of post-sales customer service also play a vital role in influencing customer decision making while purchasing an automobile in India. Again if one looks at the model of Tesla’s after-sales services, they have varied options such as mobile service vehicle (doorstep service), premium experience at supercharger stations have been quite a hit among its users.

Overall these three factors if adopted effectively by the EV startups in India across both two-wheelers and four-wheelers segments can give them a comparative advantage in terms of tackling the colossal brand equity created by the traditional automotive makers in India who are venturing aggressively into the EV segment.

More such insights on the consumer profile and perception of electric vehicles can be found in the full report— Electric Vehicle Market Outlook Report 2020.