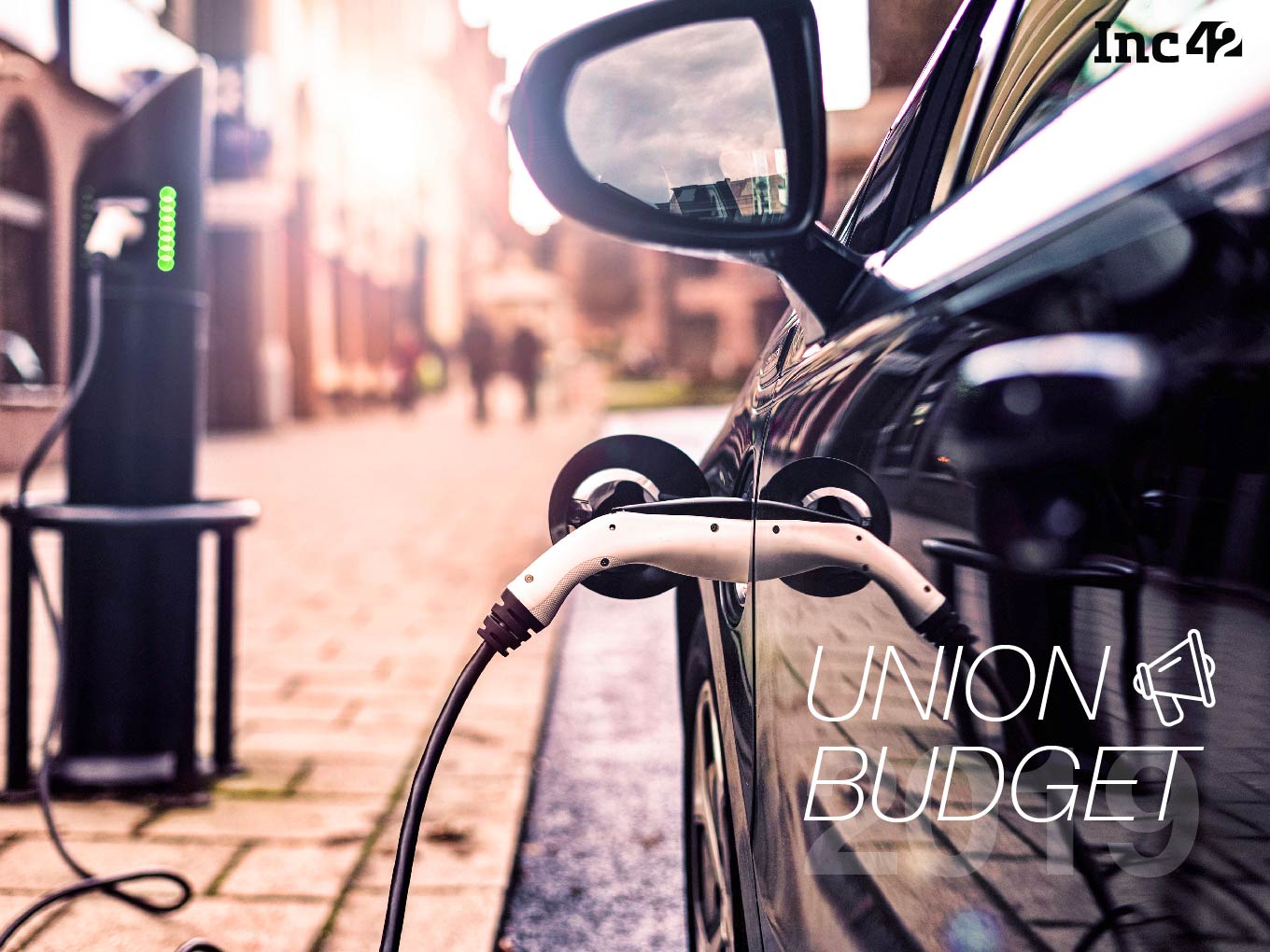 In her maiden budget speech, Finance Minister Nirmala Sitharaman said that the government is aiming to make India a global hub of electric vehicle manufacturing. To achieve this, the FM proposed a new scheme which will invite global companies through a transparent competitive bidding process to set up mega manufacturing plants in sunrise and advanced technology areas including lithium storage batteries, and charging infrastructure.

Akhil Aryan of energy storage startup ION Energy had earlier told Inc42 that accelerated production and promotion of domestic battery cell manufacturing and assembly capacity will boost the EV industry growth. This was one of the prime focus areas for the budget this year.

Sanil Sachar of EV-focussed incubator Huddle told Inc42 that the most important aspect of the industry adoption will come with standardisation and infrastructure support. And rightly, the government has focussed heavily on building better EV charging infrastructure in its budget announcements.

Earlier this week, the government think-tank NITI Aayog’s Anil Srivastava had estimated Indian EV industry to need an investment of $40 Bn on battery capacity over the next three years. He had also then hinted about new EV charging related incentives to be announced by the Department of Heavy Industries soon.

The centre was recently reported to be in plans for setting up electric vehicle charging points at 60K state-run petrol bunks. However, an Indian Oil executive P Jayadevan has later said that this is not a sustainable model because of the limited space at petrol pumps and longer charging time of electric vehicles.

In addition to the push for native EV manufacturing, the finance minister also proposed additional income tax deductions of INR 1.5 Lakh on the interest amount for electric vehicle loans. This should make EVs more attractive for the average consumer. Further, she also noted that the government has moved the GST council to reduce the tax in EVs to 5% from the existing 12%.

“Such incentives will help us make electric vehicles affordable for consumers,” said Sitharaman.

Shelke added this move will increase the offtake of premium electric vehicles too. “This is a positive sign for startups like us who will soon begin selling electric motorcycles. The end cost for the customer will reduce.”

Bhavish Aggarwal, cofounder and CEO of Ola said, “The government’s focus on electric mobility and EVs in the budget is inspiring. Lower GST rate, interest subvention for EV loans and the commitment of INR 10,000 cr towards FAME II are encouraging. This further reinforces Ola’s mission to build Electric Mobility for India and the world and contribute toward making our nation, the global hub for innovation in this space.”

Just earlier this week, Ola Electric has raised its Series B round from SoftBank to become the first unicorn in India’s electric vehicle space.

Similarly, Vineet Mehra, MD of EV logistics startup DOT also agreed with Tork’s Shelke and said such incentivisation would drive demand for the EV sector. Rahul Sharma, founder of Micromax and AI-powered electric motorcycle startup, Revolt Intellicorp said, “This is the start of a revolution and we believe three years from now things will change rapidly and India will be ahead of the curve in its adoption rate.”

Another, premium electric bikes manufacturing startup Ather Energy’s Tarun Mehta saw union budget 2019 as an example of a consumer-driven change and said, “It now becomes imperative that OEMs chalk out plans that allow the industry to  scale up and meet the demand for compelling products.”

However, founder of electric scooters manufacturer GoGreenBOV, Dhivik Ashok had told Inc42 in an earlier conversation that, “It really doesn’t make sense to reduce the GST on EVs to 5% as it would lead to inverted structures. Instead of reduction of GST component and basic customs duty on the motors, controllers, batteries to a value of 5% individually would add more value to the industry growth.” Interestingly, the customs duty exemption did get a mention in today’s union budget announcement.

Earlier this week, the government was also reported to be mulling over increasing taxes and vehicle registration fees on the ICE vehicles. Such measures are expected to increase the cost of traditional ICE engine vehicles and in turn, give a boost to electric vehicle sales.

“Only advanced battery and registered EVs will be incentivised under the scheme to provide greater emphasis on providing affordable and electric vehicle-powered public transport,” she added.

FAME II has come into effect from April 2019, and the government has proposed to invest INR 10,000 Cr ($1.4 Bn) over three years to support 10 Lakh two-wheelers, 5 Lakh three-wheelers, 55K four-wheelers, and 7K buses that operate on lithium-ion batteries or other electric power-trains.