Rajasthan Startup Hub: Startups Rise In The ‘Land Of Kings’

Rajasthan Startup Hub: Startups Rise In The ‘Land Of Kings’ 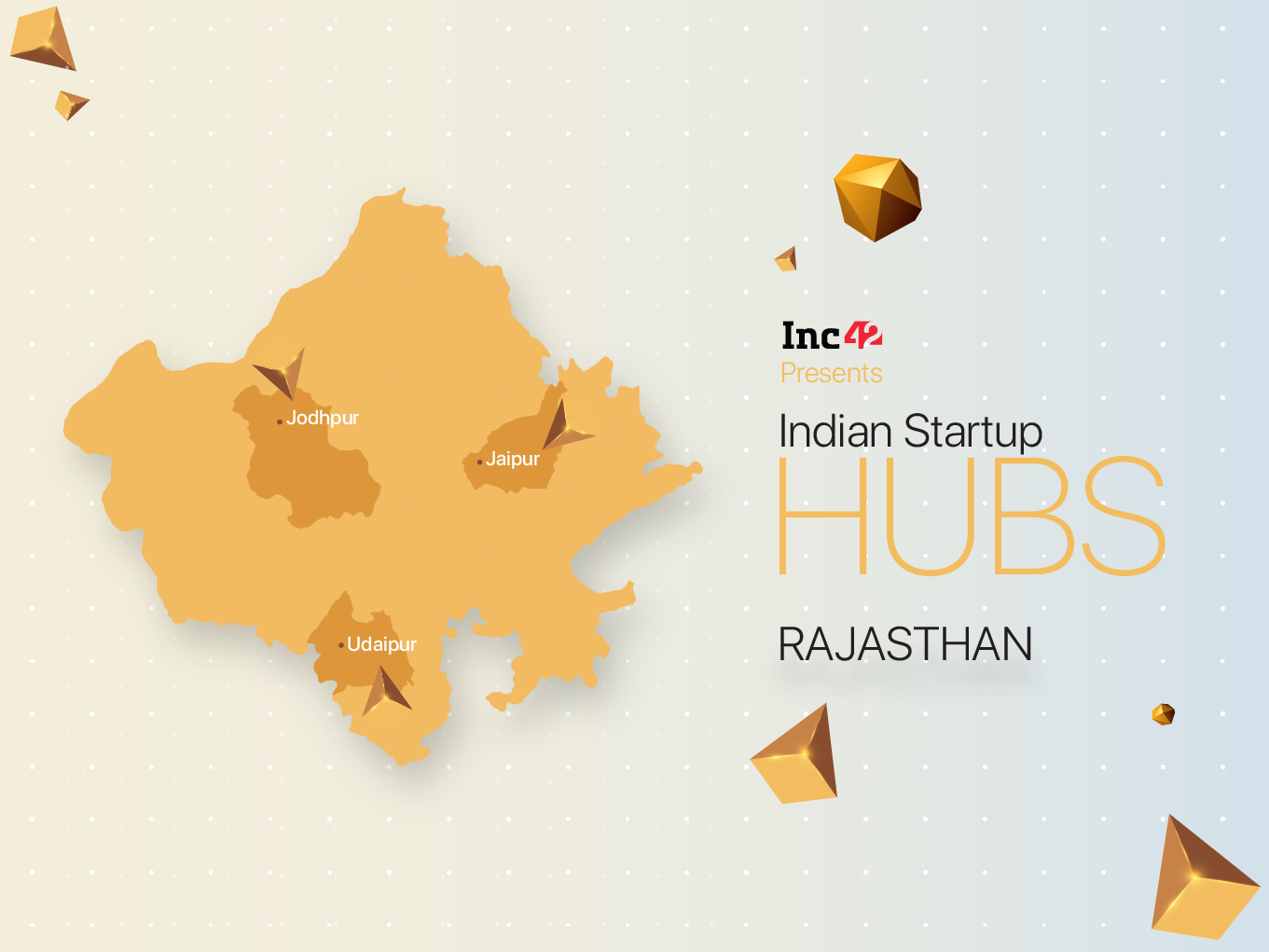 In first half of 2019, Rajasthan was the most funded Tier 2 state in India with regard to startup investments

Cities such as Jaipur, Jodhpur and Udaipur have emerged as major startup hotspots in the state

The land of Rana Sanga and Maharana Pratap has today become the nourishing ground for successful startups such as CarDekho, Culture Alley and Razorpay. Even if these startups have moved out of their first offices in Rajasthan, the ripple effect of their success can still be felt across the state.

These are two main reasons why people are afraid of taking the startup plunge in states and places which are outside the typical hubs i.e metro cities — one is the complexity of government compliance and other is lack of funding. Rajasthan has been able to deliver on both these fronts with the help of conducive government initiatives and global investor attention.

CarDekho was the first big startup from Rajasthan capital Jaipur and it attracted the interest of venture capitalists such as Sequoia Capital, Hillhouse Capital and many more. Once these big VCs and PE investors started coming to the state, it built Jaipur’s reputation as a startup hotspot — leading to many more private investments across the state, Mohit, founder of an MSMEs-focused NBFC Finova Capital told Inc42.

Rajasthan government too complemented the growth of startups with initiatives such as state-of-the-art coworking space and incubator Bhamashah Techno Hub, iStart incubator, periodic startup competitions like Dealchallenge and other ecosystem events.

From being resistant to the idea of equity funding to housing more than 10 well-funded startups in the state, Rajasthan has come a long way, said Girish Gupta, CEO of Green Fin and former investor at Rajasthan Venture Capital Fund.

The Rajasthan Startups Making It Big

In the first half of 2019, startups in Jaipur attracted more than $110 Mn in funding which was the highest cumulative funding among Tier 2 cities in India for the period. While most of this funding went to Girnar Software (parent of CarDekho), the state is also abuzz with new startups that have risen to prominence:

The more notable private incubators in the state are supported by educational institutions such as Malaviya National Institute of Technology (MNIT) Jaipur, Banasthali Vidyapith, and IIM Udaipur. In addition to this, IIM Ahmedabad and the Rajasthan State Industrial Development and Investment Corporation (RICCO) have established a body called Startup Oasis, that offers a range of services including accelerator, incubator, and coworking spaces.

Further, RAIN (Rajasthan Angel Investor Network) and RVCF(Rajasthan Venture Capital Fund) are the two most active angel funds in the state with Rajasthan-centric investors on board in the funds.

RAIN is a group of angel investors from Jaipur investing in early-stage businesses. Some of their portfolio companies include Organic Shop, Blue Box, Elation Edtech and more. RVCF too is an early stage angel fund with an average ticket size of INR 1 Cr to INR 10 Cr. Its sector preference is towards agriculture, food, healthcare and education. RVCF’s portfolio include Wooden Street, Yatra and Mosambee among others.

In order to boost entrepreneurship in the state, the government of Rajasthan launched a dedicated platform for startups named iStart in 2017. This integrated platform offers startups, investors, incubators, accelerators and mentors the right resources to connect with each other to create a more robust ecosystem for startups in the state.

iStart focusses largely on on early-stage or idea-stage ventures and startups with a minimum viable product (MVP). Thanks to its government backing, iStart is able to help startups set up shop faster and navigate the bureaucratic maze with ease. It also supports startup in fundraising by connecting them to over 100 investors who have already been brought on board by iStart.

One of the most prominent initiatives of the government was the launch of the expansive Bhamashah Techno Hub Incubator, which gained national headlines, thanks to its large capacity which can support up to 700 startups. The government followed this up with the launch of Bhamashah Startup Promotion Fund of $77.3 Mn (INR 500 Cr).

In May 2018, iStart announced a Students Startup Exposure Program which took a 91-member delegation to Silicon Valley. The programme received more than 20K applications of which 4,500+ applications were from female students in the state.

Further, the state government is now working with four entities including KPMG, EY, Indian Angel Network (IAN) and Startup Tunnel to mentor and expand the state’s startup wave across Rajasthan, instead of being limited to the capital city of Jaipur.

While the startups and investors that Inc42 spoke to agreed that the state has seen a lot of startup activity in Udaipur and Jodhpur, the city of Jaipur has the biggest chance of becoming Rajasthan’s flagship startup hub.

Rajasthan is the land of palaces, and amid the heritage, the culture of tech is taking strong roots. Next up, we will be taking a closer look at the startup stars of Rajasthan, followed by a deep dive into the enabler ecosystem in the state.

FreshoKartz business model was corrected from fruits and vegetable delivery startup to data analytics and farming insights model, as per the company’s communication.  FreshoKartz has pivoted from the fresh produce delivery model after its latest funding round in April 2019.

Earlier version of this article erroneously mentioned that Rajasthan government is only working with KPMG to mentor startups across the state. This was later corrected to reflect that the state government is in fact working with four bodies including EY, IAN and Startup Tunnel, for this initiative.