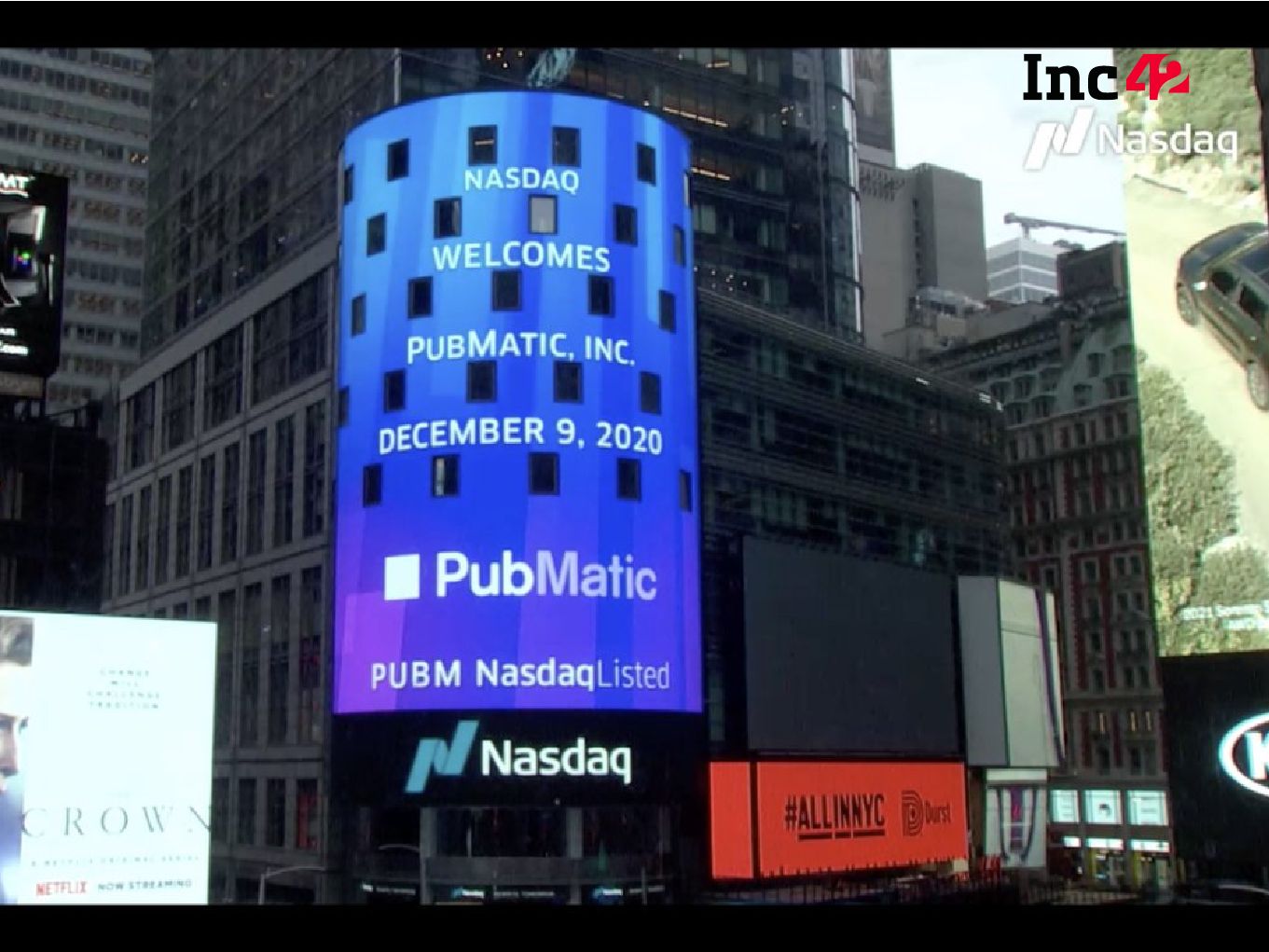 Pune and California-based adtech company PubMatic is making waves as it listed on Nasdaq last week, with an offering price (per-share value at which securities are sold) of $20. The company’s shares opened 25% higher at $25.12 on the debut day (Dec 9), and at one point, rose 65% to $33.16, earning many accolades from enterprise tech and venture capital ecosystems. The steep spike in its opening prices took its market valuation to more than $1.3 billion. The company had sought to raise around $115 Mn from its initial public offering (IPO).

In the past, India-based IT behemoths such as TCS, Infosys, Wipro, HCL and Cognizant had been listed in the US for better business outcomes. In 2015, IT player Mastek spun out its insurance SaaS business (Majesco) and listed it on the Nasdaq. It is currently pursuing a strategic sale to a US private equity firm at an attractive valuation.

PubMatic, too, is operating in a lucrative space and seems to be gearing up for the big game in the global arena, going by industry predictions. According to research firm eMarketer, the global digital ad spend was approximately $325 Bn in 2019 and is expected to grow to $526 Bn by 2024.

Founded by Amar and Rajeev Goel (they are brothers), Mukul Kumar and Anand Das, long before software as a service, or SaaS, became a technology trend and an investment buzzword globally, PubMatic has raised a little more than $76 Mn in funding in its 14-year existence. It is currently backed by the likes of Nexus India (25.7% stake) and Helion Venture Partners (18.8% stake).

But why is this adtech company getting so much traction now?

The Tech, The Techies And Their Journey

Simply put, PubMatic is in the business of software-driven digital ad sales as manual buying and selling in real time could not match the scale and complexity of the digital advertising ecosystem. The current business format requires an automated and efficient approach for fast-paced online transactions, known as programmatic advertising in industry parlance.  And the company helps publishers and app developers sell space to advertisers across media, including the display and video ads on websites, mobile web, mobile apps, short-form digital videos and smart TV connected to the internet.

Given its key tech solutions, It is not surprising that the company’s founding team specialises in two distinct areas of technology – adtech and software.

Before PubMatic, brothers Amar and Rajeev had set up Chipshot.com, an online retail outlet selling custom-built golf equipment, and its annual sales grew to $30 million within five years. Amar also started a few other companies, including Komli Media, an independent advertising technology platform in the Asia-Pacific region. PubMatic was initially launched as a service within Komli Media in 2006 but was hived off into a separate entity in 2008.

Prior to joining PubMatic as part of the founding team, Kumar and Das worked with PANTA Systems ( a computing startup) and Veritas (India), respectively. In fact, both have several patents to their names across systems software, storage software, adtech and application software.

How PubMatic Cracked The Market

A blog post by Nexus Venture Partners, one of PubMatic’s earliest investors, noted that the company identified the critical need for brand management and user experience for digital publishers and focussed on those solutions. The technology team continued to build the product in Pune while marketing and sales operations were set up in Redwood City, headed by CEO, Rajeev Goel, and Chairman, Amar Goel.

“Today, PubMatic has become a leading provider of optimisation infrastructure to digital publishers globally and perhaps the first India-originated, venture-backed enterprise software company to go public in the US. This marks a big milestone for both the Indian software industry and Indian venture capital,” wrote the VC firm after PubMatic went public.

According to recent media interviews, the ongoing pandemic has only increased PubMatic’s market reach as people are spending more time online than ever before, thus creating more advertising opportunities. Of course, having a strong technology team means the company is able to keep some core functions in-house to optimise costs better.

“What we’ve been building over the last 14 years is a global cloud platform that processes 134 billion ad impressions (views of digital ads) per day, and a trillion advertiser bids per day,” said Rajeev Goel in an interview with CNBC.com, as he pointed out the benefits of building one’s own cloud infrastructure instead of relying on third-party providers.

For a fee, PubMatic also participates in online auctions and helps advertisers buy and publishers sell media and advertising spots. With advertisers and agencies increasingly consolidating their spending and focussing on fewer tech partners, the company is hoping to capture more of that spending through extensive direct relationships with them.

The adtech company’s client list includes stellar publishers such as Verizon Media Group,  News Corp,  Electronic Arts and Zynga. The Verizon relationship alone accounted for 28% of PubMatic’s revenue in 2019 and 21% of its revenue in the first nine months of 2020.

“We help monetize valuable impressions for our clients across a wide array of ad formats and digital device types, including mobile apps, mobile web, desktop, display, video, over-the-top (OTT), connected television (CTV), and rich media. In the third quarter of 2020, we served approximately 1,100 publishers and app developers,” the company stated in its IPO filing.

According to the filing document, PubMatic directly competes with adtech company Magnite, which is valued at $2.1 Bn and generated $140 Mn in revenue in the first nine months of the year. Another major competitor is Google, which also offers supply/sale-side adtech solutions.

The Indian SaaS Market At A Glance

IT industry lobby Nasscom estimates Indian SaaS revenues to be around $3.5 Bn and forecasts it to grow six times by 2025, calling the industry a trillion-dollar opportunity and the next big thing in Indian exports after the IT and ITeS services.

India currently boasts seven unicorns in the enterprise and adtech space, including InMobi, MuSigma, Postman, Zoho, Freshworks, Druva and Icertis. The country’s SaaS companies primarily target the US and the European markets where the demand for enterprise tech solutions is quite mature and helps earn big revenues. Both Zoho and Freshworks are the most prominent names in the Indian startup ecosystem, enabling the Southern city of Chennai to become the country’s undisputed SaaS capital. Although these SaaS companies are yet to go public, many are expected to finalise their IPO plans in 2021. Software unicorn Freshworks has already tripled its valuation to $3.5 billion last year with hopes of getting listed in 2021. But so far, listings have been few and far between. So, it is no surprise that the PubMatic IPO in the US has made the Indian SaaS, VC and tech ecosystems jubilant, with many taking to social media congratulating the company.