The Paytm stock closed at INR 992.80 on January 20, lower than the previous day

A day after Paytm stock hit an all-time low of INR 990 on the National Stock Exchange, noted public personality Suhel Seth, who is also founder and MD of consultancy firm Counselage India, sparked a fresh debate calling the company a “bubble”.

Seth, who has over 4.7 Mn followers on Twitter, also called Paytm investors “dolts” and took a dig at Japan’s SoftBank, the lead investor in the fintech giant. Seth tweeted, “A bubble is eventually a bubble no matter how soft or hard the bank may be!” 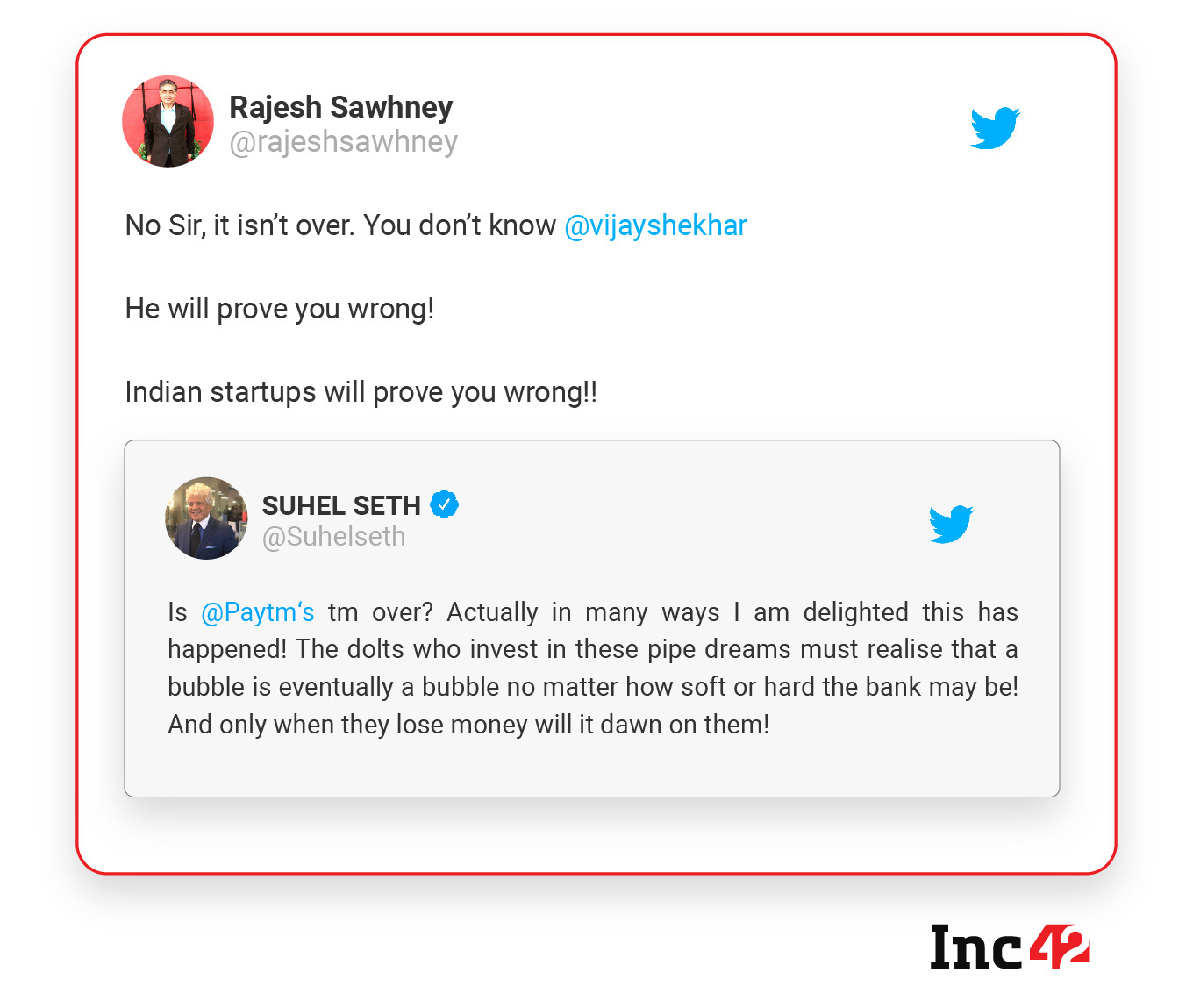 The INR 18,300 Cr initial public offering for One97 Communications, the parent company of Paytm, saw much-heated debate over the valuation, lack of profitability and spread-out business model. While the public offering received a tepid response, Paytm had a forgetful debut as the share price tanked 27% upon listing and closed the day at INR 1,564, a big fall from the issue price of INR 2,150.

Ahead of the IPO, renowned market analyst, Aswath Damodaran had cautioned investors against backing Paytm in a big way, saying that the stock should constitute a smaller portion of one’s portfolio. He had also valued the fintech giant at $20 Bn, while Paytm was said to be going for a $25 Bn valuation for the IPO.

Eventually, the company listed at a valuation of close to $20 Bn, but after listing, the market cap went below the pre-IPO valuation of $16 Bn.

Despite criticism about the valuation, several investors backed Paytm to turn the corner post its debut. Mukul Arora, partner at Elevation Capital, who was among the early Paytm investors, said that Vijay Shekhar Sharma’s company, saying that no one could have predicted Paytm’s rise so far. “In the long run, I have zero doubt that Paytm is going to be a very very valuable company,” he had said at the time.

Info Edge cofounder and executive vice chairman Sanjeev Bikhchandani also pointed out that other companies such as Infosys and Facebook also had weak IPOs but soon became good bets.  He added that the Paytm bounce back may take a few quarters but it will happen.

Earlier this week, Paytm had said it would shut its B2C product in Canada in March.

Subsequently, it clarified that the Canada consumer app contributes less than 0.1 % of its revenue in FY21. It further said this has no impact on Canada-based Paytm Labs (including its R&D and technical support business) or the company’s overall business and revenue. The clarification, however, had no impact on the stock as it closed today (January 20) at INR 992.80,  lower than the previous day. 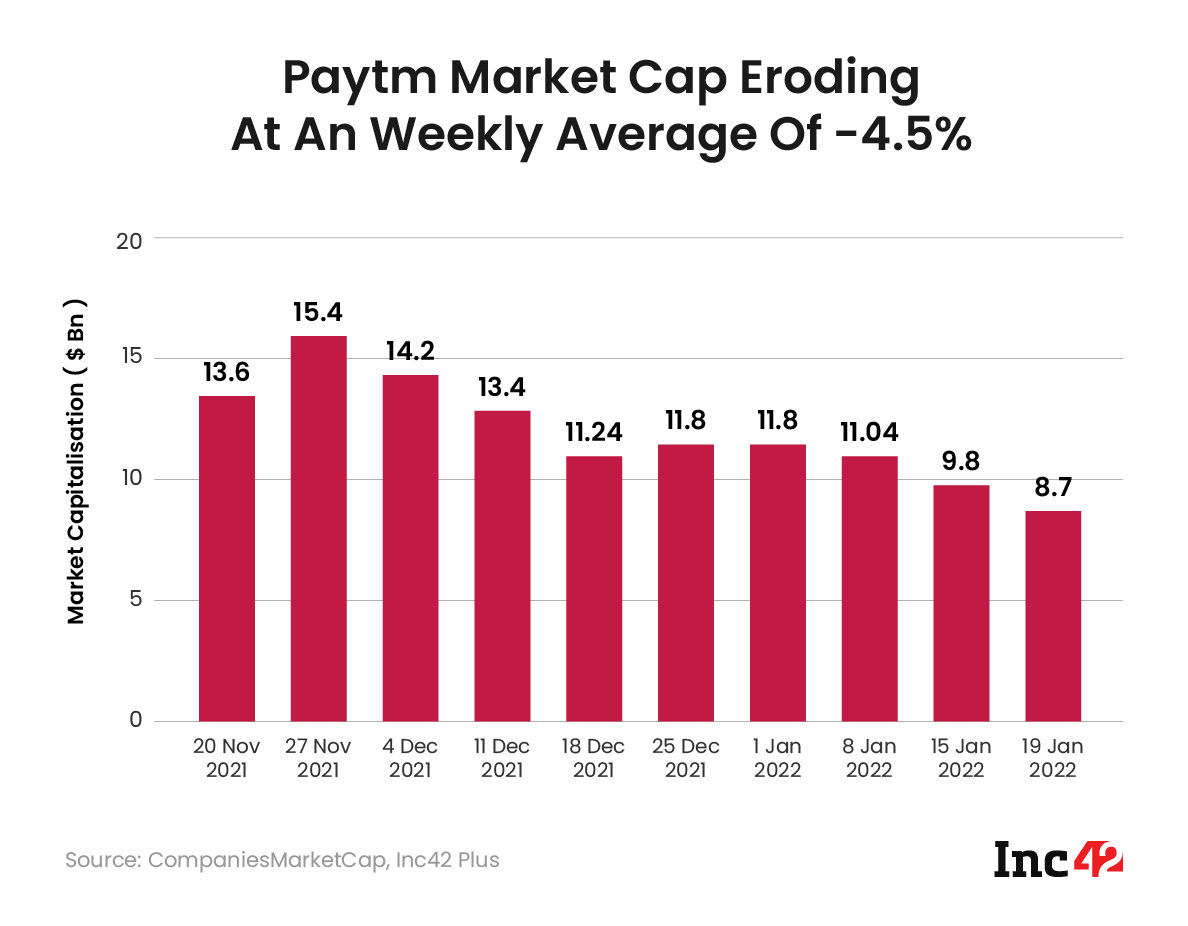 Paytm CEO Sharma seems to be unperturbed by the criticism around his company so far. In an interactive session with Rajan Anandan, MD of Sequoia India, at IAMAI’s India Digital Summit, he explained how Paytm’s global peers have also been impacted by macro conditions in the last six months.

On what went wrong on IPO, Sharma said, “We probably went in at a time (for the IPO) when PE, free money and many other parameters brought in a little bit of spook in the market,  in terms of pricing.”

But that is not complete reasoning and what happened at the IPO is still an unanswered question, Sharma said. To turn the corner, the company will focus on monetisation, driven by financial services, he added.