While the likes of Goldman Sachs upgraded Paytm to buy, brokerage firm Macquarie Research continued to call it an under-performing stock

Last week, Paytm posted INR 1,456 Cr as revenue from operations in Q3 FY22, 34% higher than the INR 1,086 Cr reported in the July-September quarter

Paytm parent One97 Communications saw a big swing in expectations from brokerage firms and analysts after posting encouraging growth in the third quarter of the current fiscal (Q3 FY2022) ending December 2021.

The fintech giant’s shares recovered after a brief drop on opening following the Q3 results. The stock was up by over 2% at INR 972 in early trading but by evening, it had seen a further correction and was trading at INR 957.40 by the end of the day, after hitting a high of INR 983.

While Goldman Sachs upgraded Paytm to buy, brokerage firm Macquarie Research continued to call it an under-performing stock and cut its target price to INR 700 from the earlier INR 900.

Breaking down the income from operations, Paytm said that GMV for merchant payment services grew by over 123% YoY, of which MDR-bearing instruments grew 77%. Merchant discount rate or MDR is the commission earned by payment services providers for non-UPI and non-RuPay transactions.

The revenue growth of 98% YoY was mainly driven by strong payments and financials services while commerce and cloud is showing recovery, the company said in its earnings report. Paytm’s top line growth of 89% year-on-year in Q3 FY22 has played a significant role in swaying analysts and brokerages.

Following the financial report for Q3, investment banking giant Goldman Sachs upgraded the stock to a ‘buy’, saying that after being down by 30% year-to-date, Paytm’s risk-reward has skewed towards an upside. Goldman Sachs expects a 119% upside in a bull case and 14% downside in its bear case.

Goldman Sachs added that Paytm is well positioned to capture market share in digital payments in India. “We expect Paytm’s increase in scale to result in an improving margin trend. Paytm has a strong balance sheet, and see limited likelihood of needing to raise capital again,” the group’s advisory on Paytm said.

The performance showed an increase in revenue from consumer and merchant payment services as well as the fintech giant’s lending vertical. In particular, the revenue from payment modes that have a merchant discount rate (MDR) has grown, as again UPI-based payments that don’t have an MDR fee.

However, Macquarie reduced the target from the INR 900 it had set last month, as it saw limited potential to scale distribution business for merchant loans. The investment firm has also increased its loss estimates for Paytm by 39%-101% for fiscal years through 2022 to 2026. 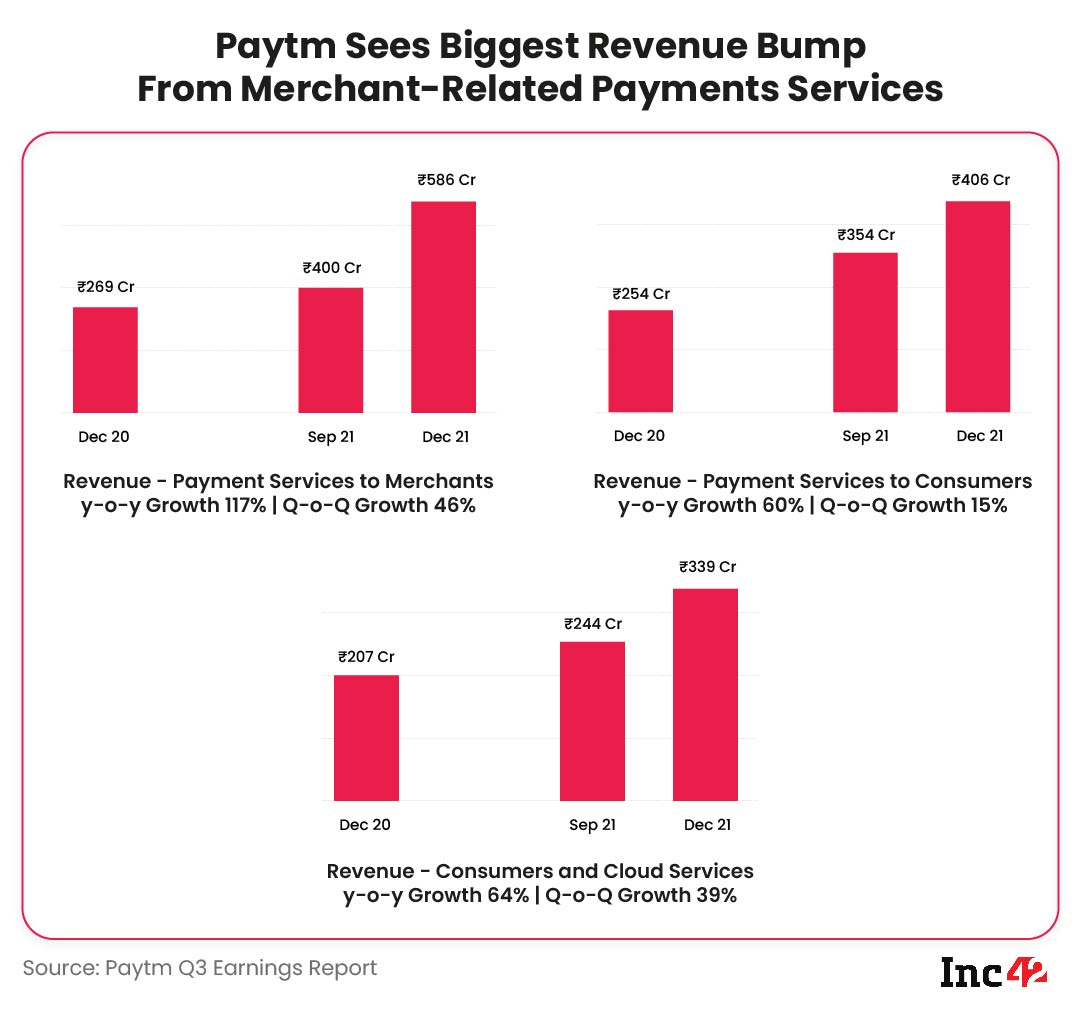 Paytm also saw growth among merchant device subscriptions with 700K new devices deployed in the past quarter. The company’s device base has now crossed the 2 Mn mark thanks to new bank partnerships, brand integrations in EMI and festive season sales. Point-of-sale devices are a key component of merchant-derived revenue for Paytm.

The payment services to merchants include QR-code payments, electronic data collection devices and Paytm Soundbox devices and payment gateway service. The company earns MDR on the gross value processed for merchant payments and additionally earns a fee from device subscriptions. 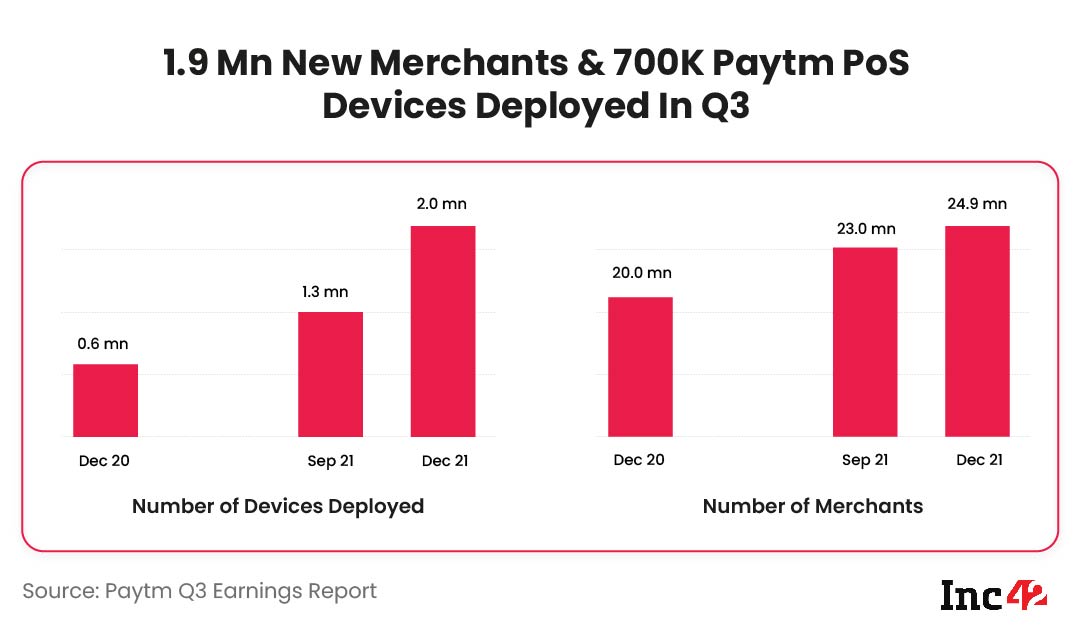 Morgan Stanley, on the other hand, lowered its PT to INR 1,425 from INR 1,875, which reflects lower valuations at peer companies. The investment banking major expects the company’s revenues to grow at 44% CAGR over the next five years to INR 17,600 Cr, up from the earlier estimate of INR 16,500 Cr.

The company’s strong GMV growth in Q3 should continue given sharp under-penetration and continued expansion of its product suite, Morgan Stanley stated in its report. Paytm has INR 10,200 Cr in cash and cash equivalents largely attributable to the IPO proceeds of INR 8,100 Cr. In comparison, the cash balance at the end of the last quarter was INR 2,900 Cr.

Further, Bank of America expects a positive reaction on the Paytm stock price after the Q3 results. “For a sustained outperformance, we think the market would need more clarity on Paytm’s competitive positioning in the crowded BNPL and merchant space,” it stated.

The lending business provides a big upside to Paytm and gives the company room to scale up. Following the Q3 results, BofA reiterated its Neutral rating, and set a price target of INR 1,130 for the stock. “We are optimistic on fundamentals and see room for Paytm to scale up aggressively without taking any risks.”

Among verticals, Paytm’s lending business continues to see strong momentum, with share of higher commission personal and merchant loans going up, resulting in 41% QoQ revenue growth. The buy-now-pay-later (BNPL) business disbursed loans of INR 1,190 Cr, a 408% YoY rise, while personal loans worth INR 516 Cr, were disbursed in the quarter. Finally, merchant cash advance loans worth INR 474 Cr were disbursed by the company.

The value of loans disbursed nearly doubled to INR 2,180 Cr vs INR 1,260 Cr in the previous quarter. Dolat Capital’s analysis (DART) said Paytm offers a unique play given the conducive market conditions for digital payments, ecommerce and financial services in India. The firm said that the company’s platform approach is a significant advantage thanks to the lower customer acquisition cost.

The platform-led acquisition approach can drive significant profitability over time, DART claimed, and maintained its buy rating with a 12-month target price of INR 2,500.

Dolat Capital expects 13.1% growth in Paytm’s revenue driven by traction across verticals, accounting for the fact that Q4 growth might not be as strong as Q3.

The firm expects EBITDA margin to improve by 692 basis points quarter-on-quarter. “Given the large number of use cases (both on need and want), huge customer base (350mn) and robust tech platform, we believe the company can compound its revenues by 20x over a decade and would turn highly profitable and positive on cash generation by FY27e,” DART stated.

Besides payments, lending and commerce, Paytm is eyeing a revenue boost from insurance as well. It is in discussions with the Insurance Regulatory and Development Authority of India (IRDAI) for an insurance licence, following the acquisition of Raheja QBE, a Mumbai-based general insurance company in 2020.