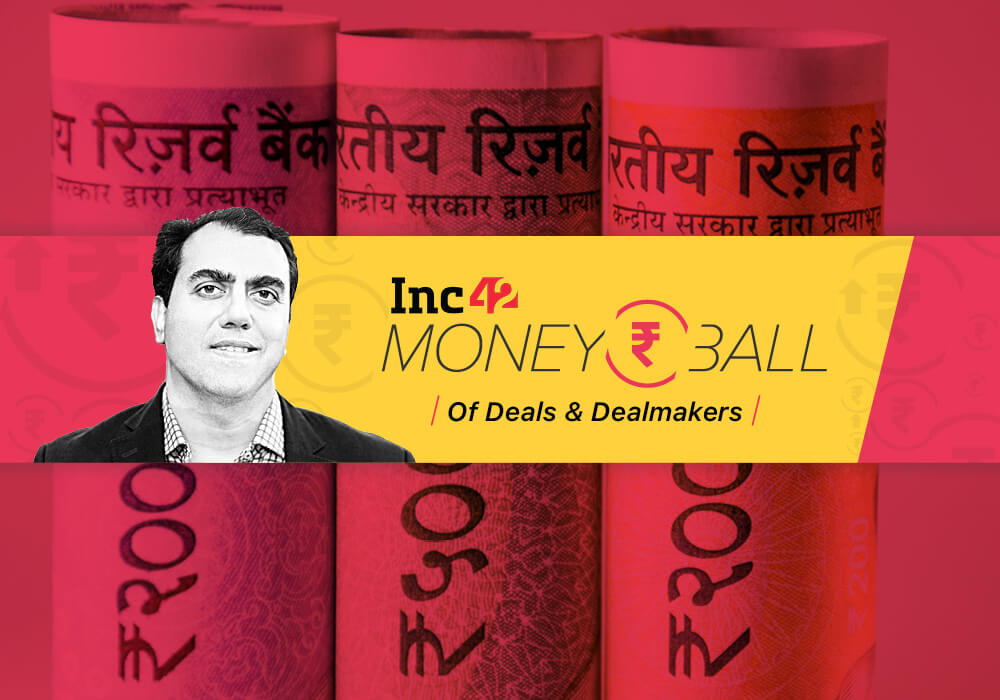 Mumbai-based venture capital firm Blume Ventures is a well-known name in the Indian startup ecosystem. According to Inc42 Data Labs, it is also one of the most active VC firms in India. It has been fuelling startups for seven years now, which may not seem significantly long, but these years have coincided with the phenomenal boom of startups in India. So, the VC firm has had a steep and fast learning curve.

Sanjay Nath and his co-founder Karthik Reddy, who established Blume Ventures in 2011, have been busy. A couple of years ago, Blume was trying to raise $30 Mn for its Fund Two and wanted to invest in 30-35 startups. Today, Blume Ventures is working on raising $80 Mn for Fund Three and has already invested in 75 portfolio companies.

To learn more about what Blume has in store for startups, Inc42 spoke with Sanjay Nath, co-founder and Managing Director of Blume Ventures, while he was on his way to the airport to catch a flight to the US. Prior to starting Blume, Nath was an advisor at Grey Orange and a seed investor at Inmobi. Sanjay, who had returned from Hong Kong only a few days earlier, had just 30 minutes and we dived straight in. Nath shared that Blume Ventures continues its focus on B2C startups and that it is also open to the B2B enterprise-tech segment, but believes opportunities of scalability in the space are limited at present. Other areas Blume is keen on are healthcare, fintech, and AI-driven startups. Nath also spoke about how Blume Ventures’ alliance with Draper Venture Network (DVN) is helping its startups access markets in Silicon Valley and Japan.

Here are excerpts from the interview.

Inc42: What has gotten you excited about startups of late?

Sanjay Nath: One of the criticisms of the Indian startup ecosystem is that the scale and size of exits by investors and funds have been sub-par. The Walmart-Flipkart deal has put India on the global scale and E2E, with its hugely successful IPO on NSE Emerge, drew a lot of attention to the industry. We have seen value creation in the past, but now what we are seeing is value realisation, and although many exits, barring Flipkart, are small in value, they are happening.

The second thing is the rising occurrence of the serial entrepreneur. They are entrepreneurs who’ve been there done that. I think the quality (of this category) has gone up and is far better than it was two-three years ago.

Another thing that has gotten me excited is the rise of deep-tech startups. For example, Locus uses AI solutions for supply-chain management in the logistics space. In particular, we are seeing startups solving a lot of India-specific problems. For instance, Stellapps is a Fitbit for cattle that aims to streamline dairy produce with the use of sensors on cows.

Inc42: Talking about Blume’s philosophy of aiming at large market solutions, can you describe how you balance your approach in a scenario where the market size for new technology is initially small?

Sanjay Nath: The entrepreneur and the investor have to have clarity on what problem they are looking to solve and what is the market. For example, there is a notion that it’s difficult to create enterprise unicorns here in India as Indian consumers are still immature and price-sensitive, and that’s why it’s important for startups to expand beyond India.

So, the Indian market is not big enough to support the enterprise software play and one should start looking at the global market from Day 1. But, if you are in the consumer space, it is completely a different picture and the opportunities to scale in India are huge.

Inc42: Blume and its teams have gone on visits to China and the US. Is Blume looking at more global partnerships and integration?

Sanjay Nath: We became part of the Draper Venture Network (DVN) and that has really helped us on the B2B side as our startups can go to Silicon Valley and markets such as Japan. DVN, started by Tim Draper, who is considered a pioneering figure among VCs, is an alliance of independent VC firms that connect leading entrepreneurs and investors around the world.

On the consumer side, there is nothing final as yet. We were in China and Hong Kong just last week with our core investors. It is very interesting that the Chinese and the Japanese are not only coming into later rounds but they are also coming into Series A and pre-Series A investments.

This gives startups the advantage of getting better visibility of and access to potential customers. The gravity, as far as the consumer is concerned, has shifted to the East to China, Japan, and Southeast Asia, and they will become even stronger.

Inc42: What role can funds like Blume Ventures play in a scenario such as this? What is the point of the above initiative?

Sanjay Nath: Our goal is to basically find longer-term capital, both for the fund and for startups — they (investors) need to believe in India in the long term. So, for example, while the Japanese want to come to India to co-invest, the goal for us is also to find a partner who will be global sellers and resellers for our portfolio companies. The road from Bengaluru (India) was only to San Francisco (US). Now, it is towards Tokyo, Beijing, Singapore, and even Dubai. Not only are we getting on the plane to go there, they too are making trips to meet us.

I think Prime Minister Modi has put India on the map, so the macro India story doesn’t need to be sold or retold.

Inc42: Blume Ventures is one of the most active investors in India. How do you make sense of all the noise with every startup claiming to be the next disruptor?

Sanjay Nath: We have to realise that the venture capital business is not a fad business. It’s not as if I will invest in a startup only if it’s ‘hot’.

Let’s take the example of artificial intelligence — AI becomes more robust when you have underlying data, and India is very early in terms of both the data that is collected and in terms of the talent. Blockchain is the next big thing but both of them are platforms, so what solutions they provide and for which problem is what really matters at the end of the day.

If you look at Healthifyme, it is using AI for health analytics and, similarly, we have Locus for AI logistics. We don’t just see if you’re an AI startup, but what we, more importantly, look at is what you are building, who is the customer, and the problems that you are trying to solve.

Inc42: How is the progress on Blume Ventures’ Fund Three?

Sanjay Nath: It will be around $80 Mn and we expect this to be done by before the end of the year. Blume now occupies a unique and differentiated spot in the pre-Series A and Series A investment market. We will also be writing slightly larger cheques and investing in fewer companies going forward.

Inc42: How will that translate in terms of numbers?

Inc42: What advice would you give to startups looking to pitch for investments?

Sanjay Nath: Think very carefully about what problem you are going to solve, and having a team is preferable (even for single founders). Investors also look at how much have you achieved without funding and one should have enough users to attract investors.

Another closely related piece of advice is: make your interaction with the VC more an engaging conversation than a sales pitch. I would put this as ‘product, not just pitch’. People usually get more involved once they feel engaged. Also, ask for active feedback in initial meetings before you hone and perfect your pitch.

Inc42: Which sectors will Blume be focussing on?

Sanjay Nath: Consumer startups still dominate but we will also do enterprise B2B. Also, one of the things we will also do is look at the SMB segment which is also a very interesting segment. If you look at startups like NowFloats, which are basically enabling offline to online and helping merchants connect with users and vice versa, we find it very interesting. Healthcare and fintech also have our intrigue. And we will also look at AI as a platform that can be applied across various verticals.

Inc42: What is an absolute red flag while receiving pitches from entrepreneurs?

Sanjay Nath: There are two minor irritants (more than red flags):
a) Pitches that compare their startup to and spend more time focusing on leaders/other incumbents, rather than articulating the startup’s own USP
b) A bigger irritant — a mass mailer from a startup to a series of VCs all marked on cc (or even bcc). Dear Investor… (yes, it happens!)

Inc42: What is your morning routine?

Sanjay Nath: A quick mix of stretches followed by breakfast, checking and replying to critical emails, and increasingly overseas calls, before heading to the office. (I) Would love to make a morning walk part of my daily routine, but it usually gets pushed to a few evenings every week.

Inc42: What does a typical workday look like for you?

Sanjay Nath: When there is no travel, my workday usually involves outside meetings first thing over breakfast/morning coffee or last thing (pre-dinner). The rest of the day in office is a mix of internal meetings and inviting visitors to the office.

While traveling, Bengaluru (where a majority of Blume’s portfolios companies are located) is always a two-three day trip, anchored around board meetings and ecosystem events, around which other portfolio and pipeline meetings are planned. Six-eight meetings per day are fairly routine. Increasingly, overseas travel has become more frequent.

Hong Kong is one of the only/few major metro cities in the world where you can literally walk into any meeting! The density of office buildings and logistics is among the highest and almost every meeting is not more than 10 minutes apart.

Inc42: Which books/authors/personalities do you follow? What would you currently recommend to read/watch?

Sanjay Nath: On Twitter, one of my go-to accounts are @naval, @Valaafshar and @PauloCoelho. Papers and publications I like to read are the New York Times, WSJ, The Economist, and closer home, a quick daily read of the India trio — TOI, ET, and Mint. I like watching NatGeo and other discovery, wildlife, and travel channels. Unfortunately, I don’t get time to read books and most of the reading I do is online.

This article is part of Inc42’s latest series, MoneyBall – Get up close and personal with the pioneers of the investment world. Dive in to find out about what excites them, their views on the latest technology & investment trends and what the future looks like from their viewpoint, explore more such stories here.