The funding numbers for the first quarter have come in for the fintech sector, and they look less than exciting. According to Inc42’s State Of Indian Fintech Report, Q2 2022, the funding raised by fintech startups declined almost 45% to $1.77 Bn during January-March 2022 from $3.2 Bn raised in the December quarter of 2021. 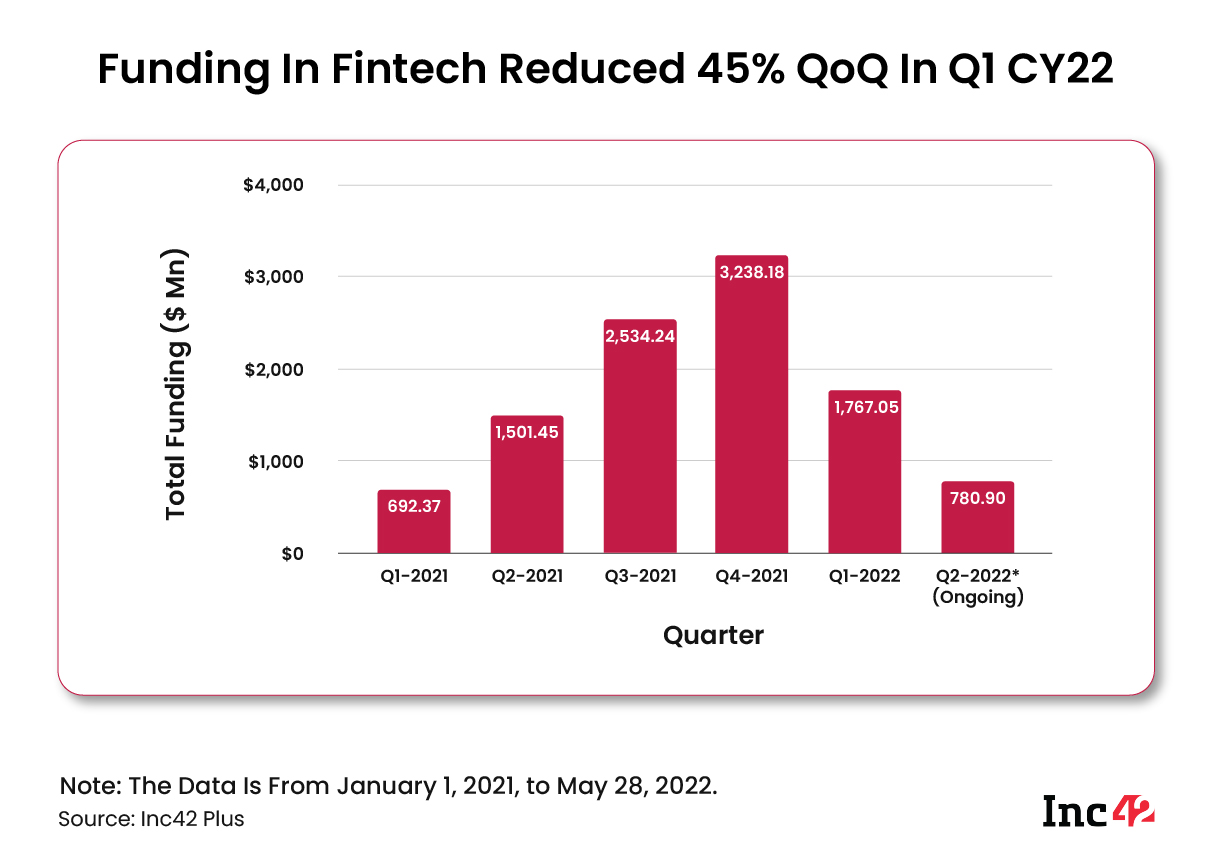 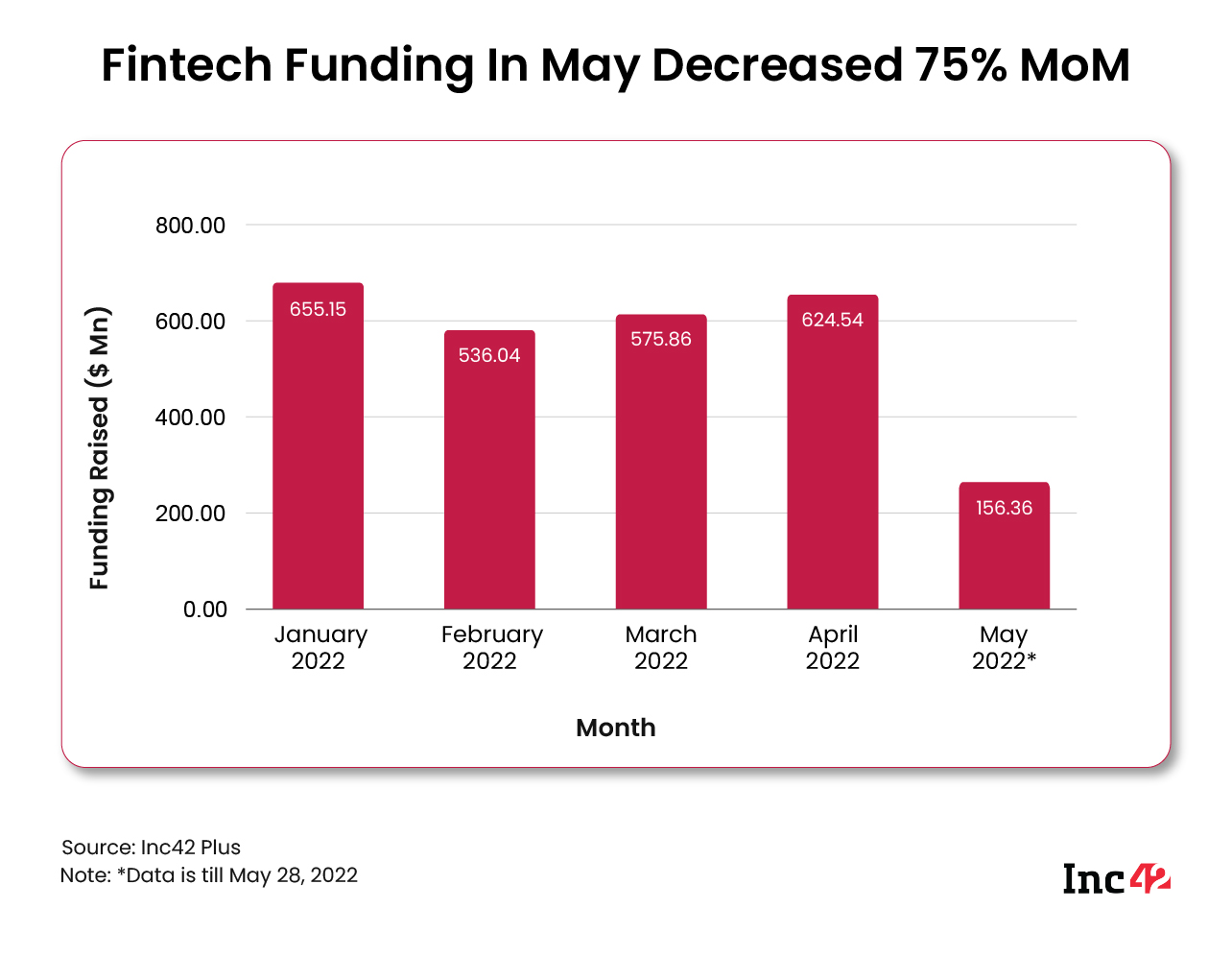 Even though there is a strong undercurrent in favour of seed funding, it still only accounts for slightly more than 4% of the total funding in the fintech sector or about $375 Mn since the beginning of 2021.

It is worth noting that of the more than 300 deals that took place over the last five quarters, the top 15 fintechs have raised as much money as the bottom 292.

Pine Labs, which turned unicorn in 2020, has raised more than a billion dollars over the last five quarters, with its most recent round being a $50 Mn round in March 2022, which valued it at $5 Bn.

On the other hand, Oxyzo’s $200 Mn round, which was the largest in Q1 2022, put it among the top 15 fintech startups in terms of funding raised.

This just shows that the top Indian fintechs still hold big sway in terms of funding and that startups towards the lower rung of the ladder have to push harder for capital. 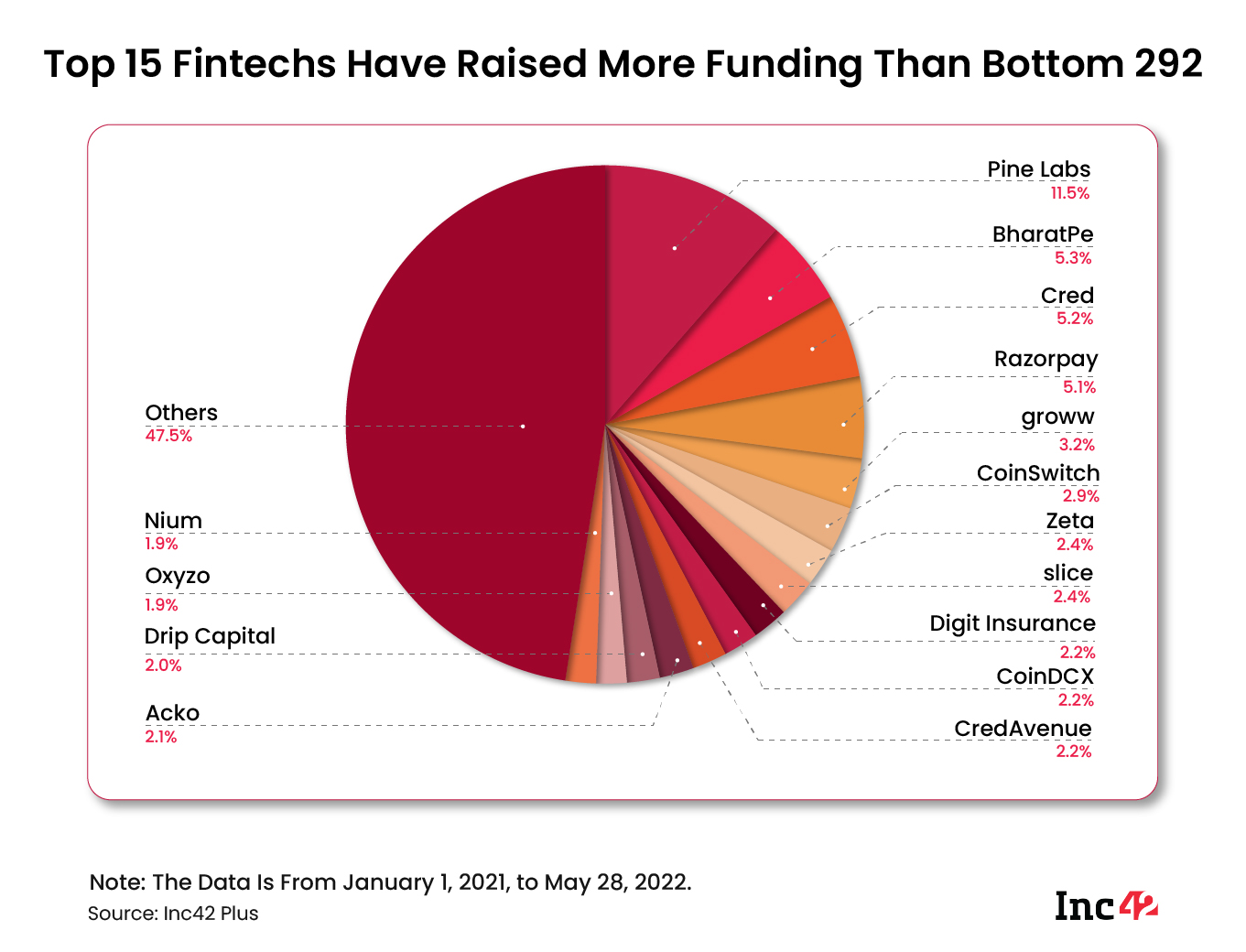 Optimism Stays In The Fintech Camp

Most of the industry players attributed the decline in funding to more prominent macroeconomic and geopolitical factors, including the ongoing Russian invasion of Ukraine, a spike in inflation, monetary policy tightening, a public market slump in the US, and the recent underwhelming financial performance of some new-age startups.

Looking back and connecting the dots, a perfect storm of liquidity crunch, increased caution among VC firms, and overvaluation and underperformance have led to the decline in funding for the fintech startups.

As Suhail Sameer, CEO of BharatPe indicated, these events have fueled the PE and VC firms to look more at the profitability roadmap and efficiency metrics while evaluating the investment prospects.

The fintech funding trends depict the same picture. With VC firms now looking to invest with more restraint, the evaluation criteria are expected to shift from growth numbers and scale to positive unit economics, revenue cycle, profitability ratios, and product-market fit among others, particularly for the growth stage above deals.

That said, the investors and entrepreneurs are also optimistic and see the current slowdown as more of a market correction rather than a full-fledged winter.

“Last year a lot of great fintech companies were funded at a growth stage and multiple innovative ideas were scaled. Most investors would want to see how these bets play out before doubling down further which is fine,” said Anurag Ramadasan, partner at 3one4 Capital.

On the other hand, Vaibhav Domkundwar, CEO and founder of Better Capital, believes that this might be a good thing for the sector, and several resilient fintech companies will make it through the ongoing market conditions.

“It is a cycle to correct the irrational valuations in the market across multiple segments, including fintech. The current situation has emerged because private market valuations had gone far ahead of where they should be,” he added.

Sure enough, India’s 21 fintech unicorns have a collective valuation of $64 Bn, bringing the average valuation to more than $3 Bn.

With all of the Indian startup ecosystem facing headwinds in the face of adverse global macroeconomic pressures, fintech is not an exception.

Considering the market sentiment right now, Domkundwar believes that fintech startups may have to adjust their plans to balance growth with monetisation and ensure that monetisation is sustainable and scalable. This is a tough balancing act but the best teams will figure it out

Sunitha Viswanathan, Partner at Kae Capital further added, “A special focus should be made on extending the runway for the next 18-24 months. That may come at the cost of growth but has to be done regardless.”

Besides, the Indian fintech startups are also facing a slew of regulatory challenges, including:

Government’s Adverse Stance on Cryptocurrency: Finance Minister Nirmala Sitharaman announced a 30% tax on all capital gains made on all cryptocurrencies during Union Budget 2022. Further, the government will also charge a 1% TDS for all crypto transactions above INR 10,000. It is prudent to note here that the government’s stance on crypto comes even as India ranks second on the global crypto adoption index.

Amid all this, the GST Council is planning to impose a 28% GST on cryptocurrencies. With RBI’s seething comments on cryptocurrencies – having compared the whole thing to a Ponzi scheme – the current Indian crypto environment is one of uncertainty.

RBI’s New Mandates For Recurring Payments: Last October, RBI announced a new set of rules for e-mandates, which saw merchants having to send a pre-transaction notification to the users. E-mandates above the value of INR 15,000 would have to be verified over a call from the customer before the actual debit.

In its aftermath, following a lot of confusion and a general lack of coordination within the industry, Apple App Store stopped accepting credit and debit cards for recurring payments, asking users to deposit money via net banking or UPI in Apple Wallet. On the other hand, Netflix had put several Indian accounts on hold due to a lack of clarity on recurring payments.

Low Tech Literacy And Trust On Fintech: India still has a relatively large population which remains unbanked; according to Inc42 data, around 48% of India’s population does not have a bank account. This creates a challenge for fintech startups to reach a very large population in Tier 2+ cities.

Furthermore, even for people who have a certain degree of tech literacy, new-age fintech concepts such as neobanks, crypto and so on are still new phenomena they have little to no knowledge of. Trust in these concepts is still on the lower side, making for another pain point for fintech startups.

What’s The Road Ahead?

While the influx of money in fintech has slowed down, it is not a permanent state of affairs. As many of the VC firms have said, startups need to reevaluate their spending and rein it in, extending their runways in the process.

Mirroring the sentiment, Domkundwar said, “Companies and segments where the additional value delivered is not deep enough will struggle and we’ve seen some of this in global markets as well.”

The funding will surely come back – markets are cyclic after all. However, the current environment should serve as a wake-up call for the entire startup ecosystem of India, not just the fintech startups.