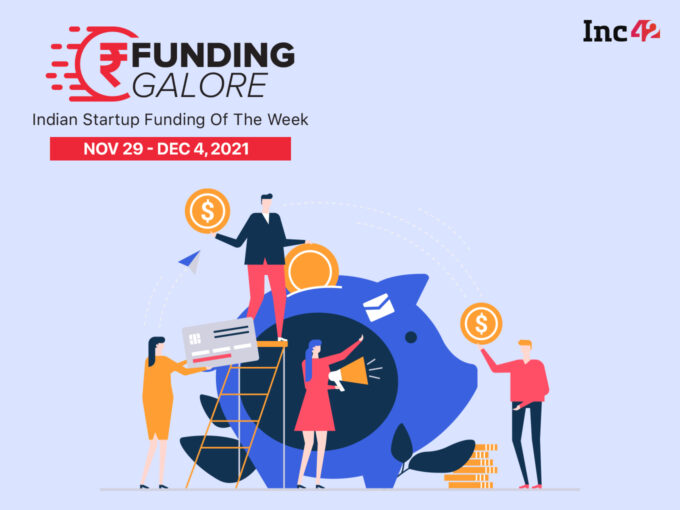 After a boiling funding round throughout November that raised $1.8 Bn in investment across 38 deals, December started on a cold note; so far. Startup investment has dropped significantly in the first week of December. Between November 29 and December 4, the Indian startup ecosystem managed to raise around $535 Mn across 49 deals. This is a 70% drop from the last week, where the ecosystem mopped up around $1.8 Bn in investment across 38 deals. However, this week’s investment is also 33% higher than the week prior, when the ecosystem bagged $400 Mn across 26 deals.

The biggest investment in this week was picked by Bengaluru-based fintech startup slice, which bagged $220 Mn in a Series B round led by Tiger Global and Insight Partners. This capital infusion helped slice to enter the unicorn club at over a billion dollars valuation.

The second largest round of funding was led by CureFit. Inc42 exclusively reported that CureFit closed its $145 Mn round after receiving investment from Zomato, Temasek, South Park Commons, Accel and Mukesh Bansal at over $1.4 Bn valuation.

C.E. Info Systems, the parent company of MapmyIndia, a digital-based mapping startup, has received the approval from the Securities and Exchange Board of India (SEBI) for its initial public offering (IPO).

The startup’s proposed offering would consist of only offer for sale (OFS) from the promoters and the existing shareholders. They would offload up to 9,589,478 equity shares.

The initial public offering (IPO) of travel tech startup RateGain will open on December 7 and close on December 9, 2021.

The travel tech startup has lowered its fresh issue size by INR 25 Cr to INR 375 Cr for its proposed initial public offering, according to the company’s red herring prospectus (RHP). Its initial offer included a fresh issue of INR 400 Cr.

The Noida-based travel and hospitality software-as-a-service (SaaS) startup got the approval for its IPO from SEBI around a week back. It had filed its draft red herring prospectus (DRHP) in August 2021.

Travel tech startup RateGain has fixed the price band for its initial public offering (IPO) at INR 405 – INR 425 per share.