After a dip in January and February, the global crypto market started seeing a recovery in March

Some of the stakeholders believe that the current low trading volume does not reflect the real impact; the industry has to wait for one-two more weeks

If 2021 was the year of a dream run for the cryptocurrency market in India, the whopping growth rate may prove to be harder to come by in 2022. At the beginning of this year, the Indian government announced tax rates for the transaction of virtual digital assets (VDA). The industry heaved a sigh of relief as the announcement came to them in the form of reassurance, and recognition.

However,  it is not all hunky-dory as the cryptocurrency exchanges have already started witnessing a downward trend in trading volumes after the rules have come into effect on April 1. As it has been eight days since the new rules have kicked in, Indian cryptocurrency exchanges such as WazirX, CoinDCX, BitBns, Zebpay, Koinbazar, among others, have started to see a significant decline in the trading volume.

A High Trading Volume In March

Crypto exchange CoinDCX has seen fluctuations and a visible downtrend in the trading volumes but the exchange has not noticed any impact on its user base. According to Minal Thukral, SVP, growth and strategy, CoinDCX, the trading volumes were on the higher side on March 31 but this is a common trend at the end of financial years.

“All investors and traders become active towards the end of the financial year to make the most of tax harvesting provisions, and most investors also end up squaring off their positions before the start of the new financial year,” Thukral said.

After a dip in January and February, the global crypto market started seeing a recovery in March. As stated by Nischal Shetty, founder, WazirX; there has been a 20-30% uptick in March volumes compared to February. As per Coinmarketcap, WazirX had a trading volume of $32,317,893, with 1,196,721 weekly visits( as of April 9, 18:00 pm IST).

“We are seeing strong global trends favouring crypto adoption, but we will have to wait for the India story to unfold. It is still premature at this point to predict anything with certainty. However, I believe we will have some idea by the second or third week of April on whether crypto taxes will impact the industry or people will still trade and not worry too much about the changes,” Shetty commented.

Shetty also noted that the number of sellers has gone up by nearly 30% recently. According to him, the increase in the number of sellers cannot be attributed entirely to the closing of the financial year. As Bitcoin price also increased by 11% during the same timeframe, many traders might have squared off their positions to book profits or to minimise losses, Shetty pointed out.

“While it’s too early to comment on whether investors’ interest in the crypto industry will falter owing to the new tax rules, we have definitely observed a lot of shifting of volumes out of Indian exchanges. Investors are still trying to understand and figure out the implications of taxation and its long-term effects. We’ll have to wait and watch how the crypto community deals with it,” CoinDCX’s Thukral said.

What Does The New Rule Say?

In the February Budget session, Finance Minister Nirmala Sitharaman introduced a 30% tax on income from all VDA transactions including cryptos, and non-fungible tokens (NFTs).

As per the new rules, loss from one asset can not be set off against gain from other assets. Moreover, gifts in virtual digital assets are also taxable in the hands of the recipient under the new rules. Most importantly, a 1% tax deducted at source (TDS) will be imposed on all crypto transactions from July 1.

For example, if someone invests INR 1,000 in a crypto asset, say bitcoin, and sell it for INR 1,200 after some time, the investor will have to pay a tax of INR 60 on INR 200 that they have gained from the transaction, going by the new tax rule.

Fearing the adverse impact of the rules, many of the financial influencers, and exchange founders have been rallying against such moves by the government. After the government announced that one loss can not be set off against another, Ashish Singhal, cofounder and CEO of CoinSwitch Kuber said, this move is detrimental for India’s crypto industry and the millions who have invested in this emerging asset class.

Aditya Singh, cofounder of Crypto India, started a petition urging the government to reconsider and reduce crypto tax. The petition has gathered 1,03,544 signatures till date. 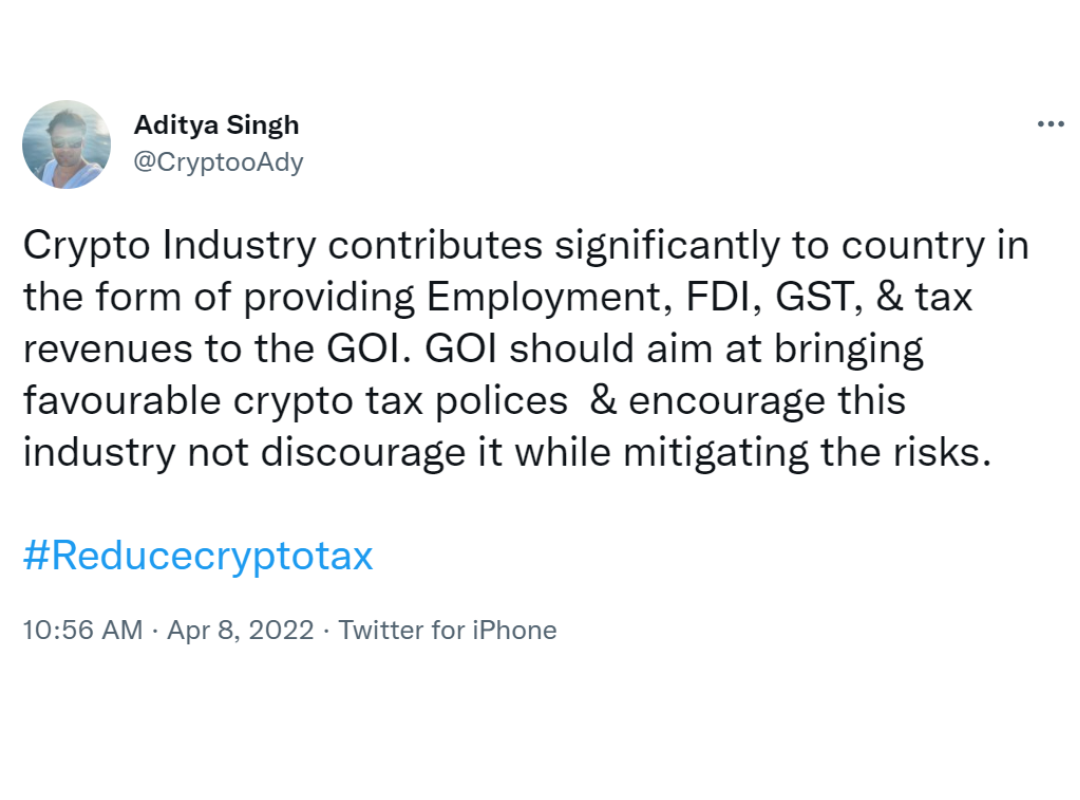 CoinDCX’s Thukral stated that they expect the real impact on trading volumes to come from the 1% TDS provision. CoinSwitch Kuber’s Singhal also echoed a similar sentiment on the provision.

“The high-frequency traders provide liquidity in the crypto market, enabling efficient buying and selling of assets. These traders operate on extremely thin margins, and locking up their capital with high TDS will restrict their ability to operate, lowering market liquidity and eventually impacting retail investors,” Singhal said.

While Praveen Kumar, founder and CEO of Belfrics Group believes it is quite premature to comment on the impact on traded volume based on the new tax rules, he also added that the uncertainty in the TDS rules has affected the market makers and the intra day traders.

“There is still a lot of confusion pertaining to the TDS and the profit tax, which will affect the exchange volume in the long run,” Kumar said, claiming that there has been no change in the user registration for Belfrics.

Will The New Tax Rules Drive Users To Decentralised Exchanges?

As retail investors may look out for other options, there are possibilities that they may opt for decentralised exchanges. These exchanges operate in a decentralised manner and allow the users to use peer-to-peer (P2P) transactions without any interference from a third party.

However, even amid the talks around stiff crypto taxes, international cryptocurrency exchange Coinbase has made its crypto trading services available to users in India earlier this week.