Covid-19 Warriors: Crowdfunding Comes To The Rescue For India’s Needy

Covid-19 Warriors: Crowdfunding Comes To The Rescue For India’s Needy 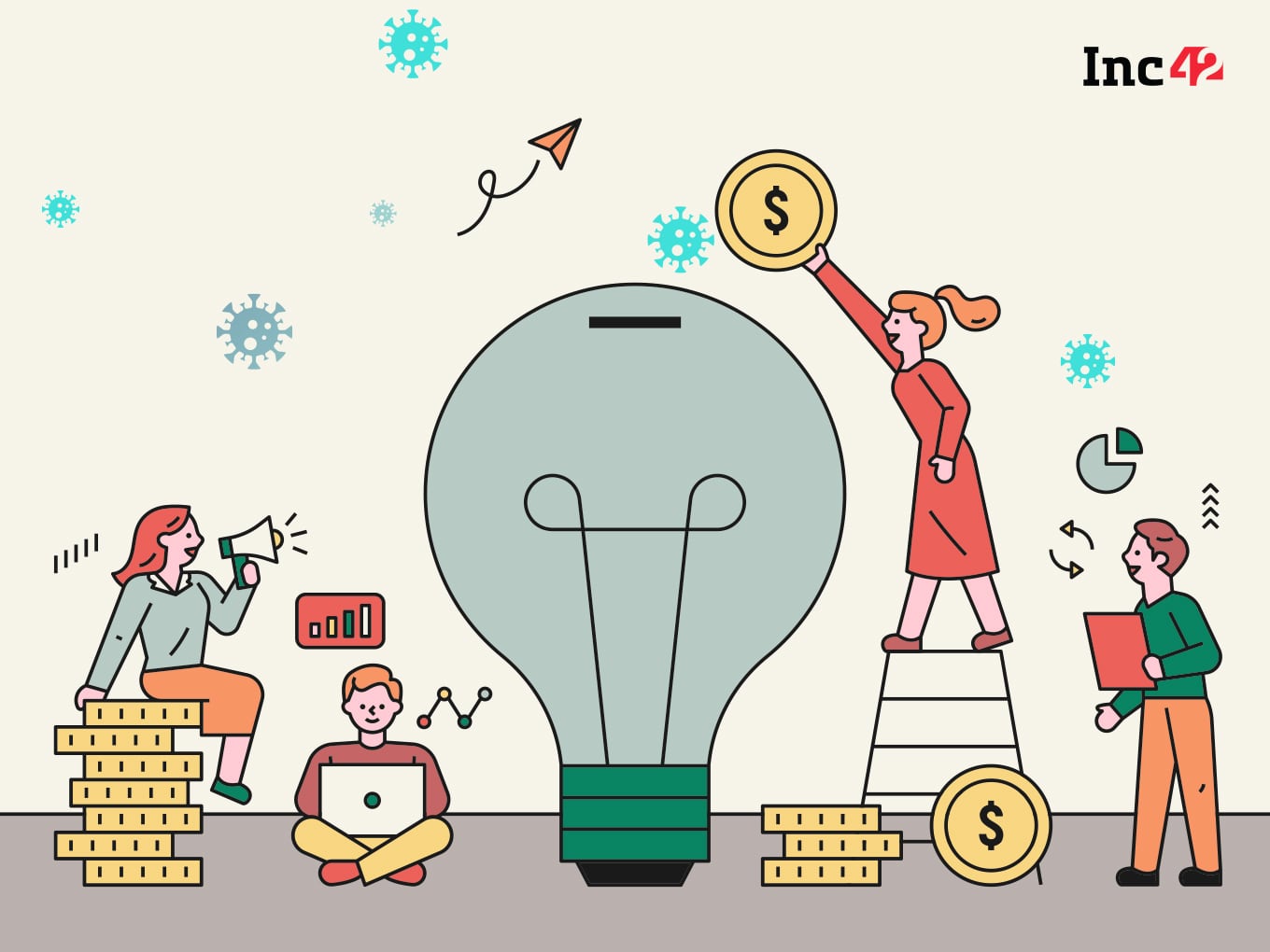 Online platforms such as ImpactGuru, GiveIndia, Milaap, Ketto, Fuel A Dream have been running active campaigns to support the marginalised affected by the pandemic

Calamities bring humans together, something author Rebecca Solnit calls ‘disaster collectivism.’ In her bestseller, A Paradise Built in Hell, she says, “In the wake of an earthquake, a bombing, or a major storm, most people are altruistic, urgently engaged in caring for themselves and those around them, strangers and neighbours as well as friends and loved ones.”

What India is witnessing today is something similar with the Covid-19 pandemic. Amid the negativity, the images of volunteers, or the so-called ‘Coronawarriors’, providing food to daily wage labourers, healthcare workers living out of hospital wards to serve the community, are something that will stay with us forever.

Altruism Is Alive And Well

Playing a significant role in this are India’s crowdfunding online platforms such as ImpactGuru, GiveIndia, Milaap, Ketto, Fuel A Dream, Goodera, Crowdera and few others. They have been running active campaigns to support the marginalised affected by the Covid-19 pandemic.

Facebook has also extended its fundraising platform ‘Fundraisers‘ to India. The initiative, which was till now only available for the US, Europe and others, now allows Indian citizens to contribute to around 70 non-profit organisations working towards various causes listed on the platform.

Facebook India head Ajit Mohan said that the platform allows people to leverage the full scale and power of the platform, and their passion, to direct resources to initiatives that can protect and save lives. The platform has partnered with GiveIndia for onboarding and verification of trusted NGOs in India. Additionally, it will also be roping in celebrities to encourage people to donate. It will be organising a Social-For-Good Live-a-thon event through Facebook Live which will feature artists from India.

Facebook has raised more than $3Bn to support various causes since 2015 across the world. On March 13, Facebook had announced the launch of a Covid-19 Solidarity Response Fund for the World Health Organization (WHO) to enable individuals, corporations, foundations, and other organizations around the world to directly support WHO’s global work to help countries prevent, detect, and respond to the Covid-19 pandemic.

“Facebook is matching up to $10 million in donations, and 100% of funds will directly support the work to prevent, detect and respond to the outbreak around the world. We’ll also match $10 million for the CDC Foundation, which will launch a fundraiser in the next few weeks focused on combating the outbreak here in the US,” Mark Zuckerberg had tweeted.

In India, some platforms have already collected more than INR 75 Cr in a short amount of time and they all have seen 100-200% spike in donations this year as compared to the same time last year. 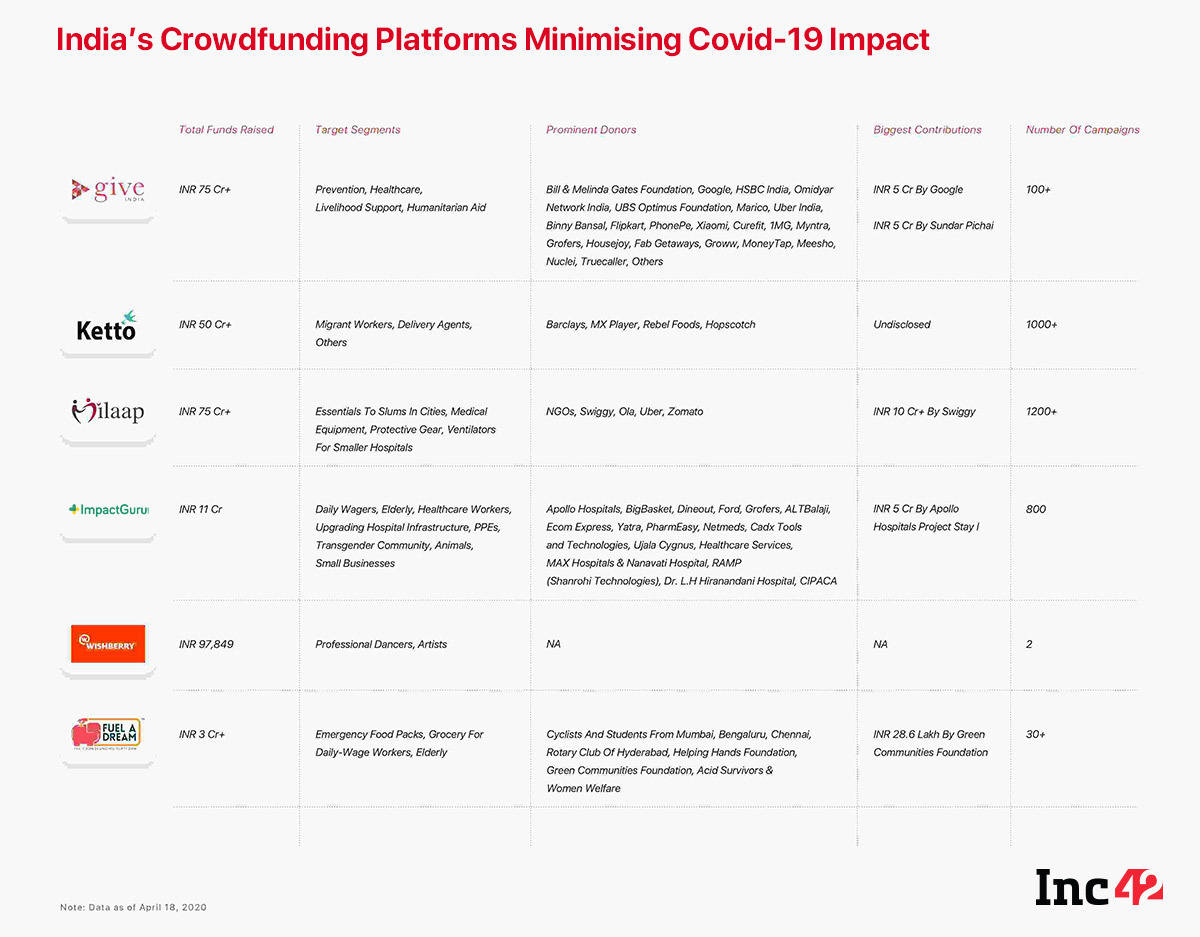 The campaigns have been catering to spreading awareness, providing prevention kits to the vulnerable and the poor, essential infrastructure support to hospitals including PPE kits, ventilators, beds, supplies to doctors, nurses and paramedics, quick direct benefit transfer of money to the neediest, cooked food, dry rations and survival essentials to daily wage and migrant workers, especially those with out-of-state ration cards and can’t access the PDS network.

“It is humbling to note that people have come forward in large numbers to support the missions demonstrating a very high spirit of giving. Platform partners and Corporates are also pulling their weight to rally behind the cause so that they can help the real needs on the ground,” said Atul Satija, founder, GiveIndia.

“It is usual to see a spurt in fundraising for relief at a time like this, because crises bring a sense of solidarity among the crowd. We saw it for the first time in the Chennai floods of 2015, and have seen the same for natural disasters in Kerala, Assam, Orissa and other states,” Mayukh Choudhury, cofounder & CEO, Milaap told Inc42.

Crowdfunding And The Role Of Tech

Simply put, crowdfunding is the practice of getting funding from an open platform where anyone can invest in a project, business venture or social cause. It is not only the quickest way to collect funds if you have the right project but also an open platform for all kinds of ideas. For Covid-19, crowdfunding platforms have worked in four key areas:

In India, equity-based crowdfunding is illegal and donation-based crowdfunding is the most popular model. Most crowdfunding websites charge a fee for using their platform and services, roughly around 5% of the total funds raised. All one has to do is list their project or campaign, set a goal and promote it. On some extra payment, some platforms offer help to increase reach and help achieve milestones faster.

Technology is a key enabler as it helps accommodate a host of payment options as well as features. Bengaluru-based GiveIndia recently launched Covid campaigns on Google Pay and other UPI platforms and has seen good traction so far. “To ensure we’re nimble for our Covid campaigns, we’ve launched the ability to create microsites for our partners in a matter of a couple of hours — and we’ve used this feature to onboard over 50 partners including Flipkart, Myntra, Xiaomi, Grofers and many others,” added GiveIndia’s Satija. The platform uses data to drive decision making and future feature launches.

One of the features that Mumbai-based Ketto has launched and one which is fast gaining popularity is ‘support fundraiser’, where anyone can create their own page for a campaign in two steps and start raising funds.

The Collective Fight Against Covid-19

GiveIndia launched two missions in response to the Covid-19 situation on March 22, 2020. One looked to provide direct-benefit-transfers to cash-strapped daily wage workers and migrant labourers, and another on preventive interventions such as raising awareness on social distancing and providing soaps, masks and hand sanitisers to poor families. Collectively, the platform raised INR 13.94 Cr for these two missions from its own fundraising pages and several partnerships with platform partners and corporates such as Flipkart, Myntra, Xiaomi, Curefit, Grofers, Marico, 1MG, Radio Mirchi, CGI and others. On April 7, it also launched a fundraiser on Facebook to widen the scope of the reach and raise funds from individuals.

Together the platform’s ‘India COVID Response Fund’ (ICRF) received initial donations worth INR 75 Cr. As part of this mission, GiveIndia’s nonprofit partners provide them with lists of beneficiaries along with phone numbers and ration cards or Aadhaar cards. The team then verifies the authenticity of the beneficiary and disburses amounts ranging from INR 2,000 to INR 7,000 basis the number of dependents and the city they live in.

“In the digital era, generosity can flow unhinged even when physical infrastructure crumbles. Many of our donors have reached out to us for verified, credible avenues to express their support for citizen-led fundraising initiatives. This is the only way to fight a crisis at this scale,” Milaap’s Choudhury emphasised.

Milaap’s causes range from providing essentials to nearby slums in bigger cities to equipping doctors with protective gear, and ventilators for smaller hospitals. Over 85K people from across the globe have given more than INR 75 Cr towards these initiatives, claims Milaap.

“Crowdfunding has emerged as a digital warrior during this time of lockdown. Corporates/CSR, philanthropists are big-heartedly contributing to the large pool of Covid related fundraisers and good citizens, NGOs are actioning this financial support by distributing food, medical supplies, PPE to daily wagers, elderly and healthcare workers. A remarkable collaboration, especially during the time of social distancing, lockdown and uncertainty,” said Piyush Jain, cofounder and CEO, ImpactGuru.

Over 800 fundraising campaigns are currently running on ImpactGuru and large corporates such as Ford and digital consumer services such as BigBasket, Grofers, Dineout and others. On an organization level, ImpactGuru has received an INR 40 Lakh grant in the form of matching funds from the Action Covid-19 Team (ACT), to scale fundraising across India.

Most of these platforms are not charging any platform fees for Covid-19 fundraising initiatives. Ketto cofounder and CEO Varun Sheth shared a story about a crowdfunding campaign for an unexpected cause — a circus group. Rambo Circus, which is stranded in Mumbai, is one of the most renowned circuses in India. Its owner and manager of the circus group have joined the crowdfunding campaign to provide essential items to the group. It has garnered INR 4 Lakh till date.

US crowdfunding website GoFundMe has said in its media interviews that it has seen a 246% rise in business campaigns compared with the same time last year. IndieGoGo has given up the platform fee it charges for campaigns for the time being. Kickstarter has also offered a seven-day project extension to any campaign that is live in China. 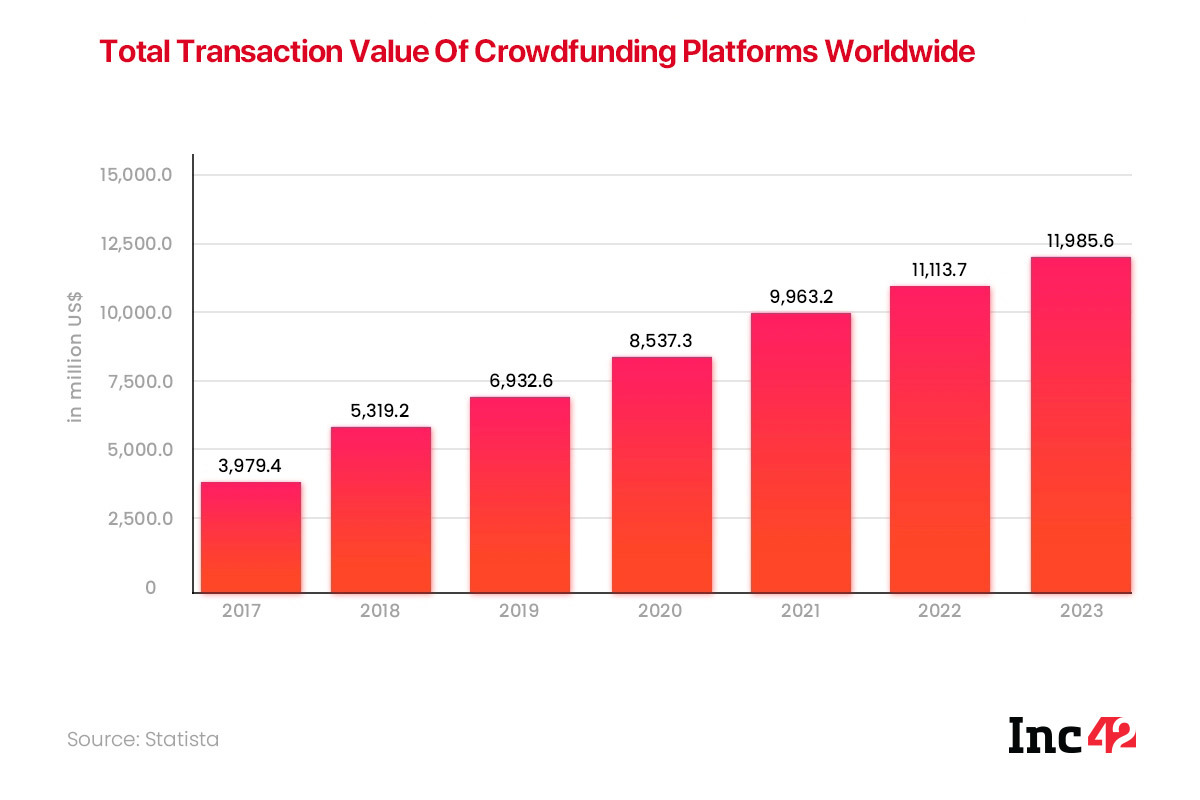 UK-based Crowdfunder has been saying that one can donate straight to charities, support fundraisers. “We are 100% free and gift aid is included,” it says. US investment crowdfunding platform Wefunder has raised $130 Mn for hundreds of small businesses from over 400K investors.

Crowdfunding in India is governed by the Securities and Exchange Board of India (SEBI), set up in the year 1988. The guidelines laid down by SEBI keeps a check on the crowdfunding.

ImpactGuru claims to have a dedicated batch of campaign managers assigned to fundraisers of each category (medical, NGOs, personal or creative causes) who check on the credibility and authenticity of the campaign by evaluating the documents shared which support the case such as hospital bills, official documents from authorities, ID proof and more. Managers also coach customers on how to fundraise effectively. Most platforms have these checks and balances in place

Through such vetting, crowdfunding platforms claim to make sure that every rupee raised goes through a special due diligence process and is only used for genuine purposes. It is also ensured that each donor that has contributed, regardless of the amount, is updated on the progress and the final outcome of the campaign.

Be it a patient’s health status or an NGO or individual’s project status, or even testimonials from patients, NGOs, individuals and the organisations that have benefitted from the campaign.

As the situation worsens on the ground, such generosity and altruism will need to be on display for many months. And crowdfunding platforms are showing the way by helping small businesses and causes through this tough crisis and in a democratic manner.