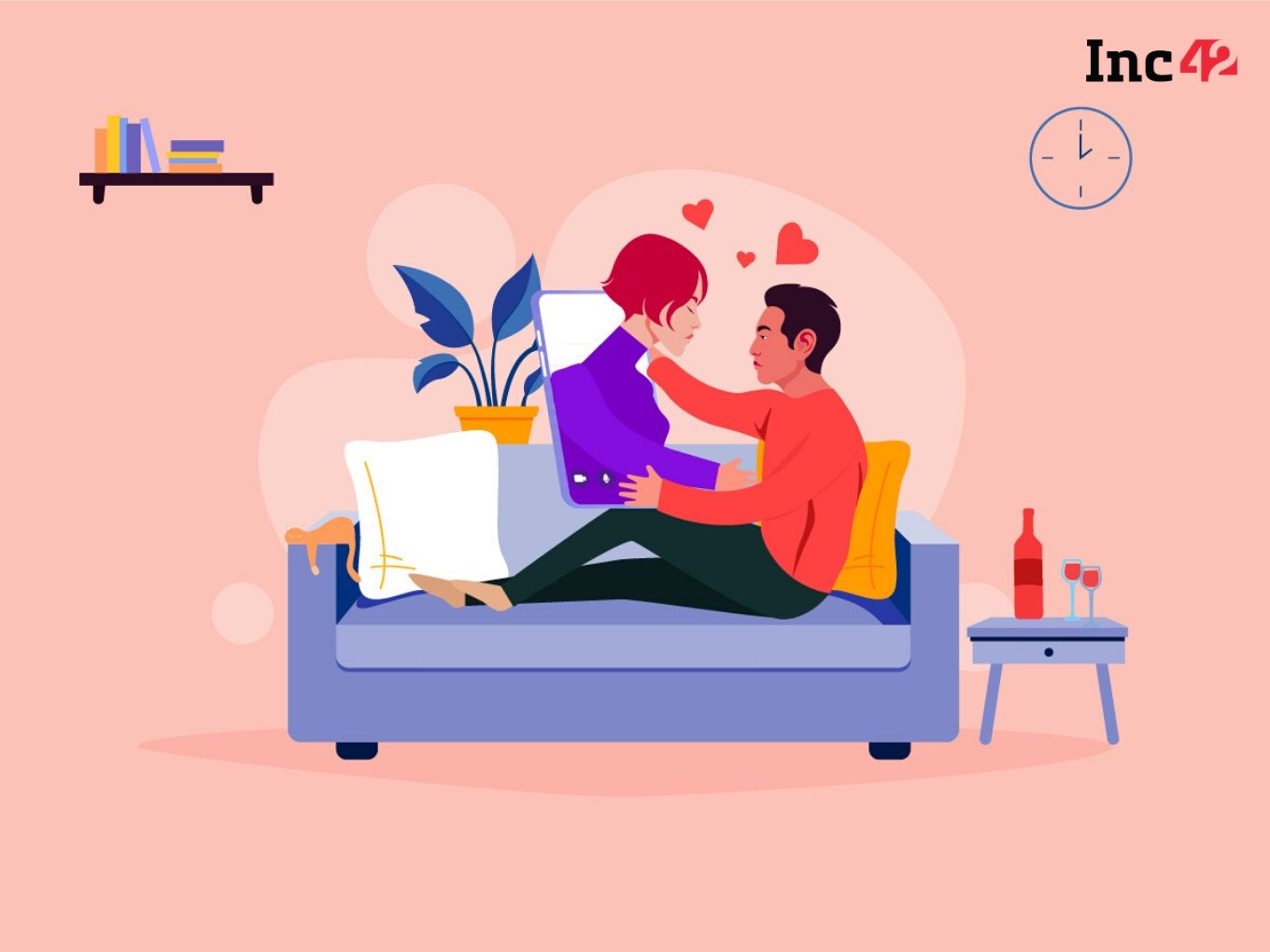 The Covid-19 pandemic might have stopped people from meeting each other but it has got little hold on the romantics. Like every other meeting in the ‘new world’, dates and meet-cutes now take place on video calls. And as a result, dating app users in India and around the world are putting in more time and effort into wooing their matches.

In the past few months, dating apps have noted a steady rise in the time spent by users in the app as well as the duration of conversations, as more and more users look to fill the void created by the lockdown. The average video or phone call time for dating app Bumble users in India was found to be 18 minutes and nearly half of all chats turned into a long conversation.

OkCupid, which saw a 30% rise in daily messages since March 11, believes the increase in the number of text messages indicates the return of ‘slow dating’, which mirrors the shift from competitive dating to steady (committed) dating seen in the wake of the World Wars, whereas pre-lockdown, users were more likely to swipe and move on to the next match.

According to 85% of the 70K global dating app users that responded to OkCupid’s survey, virtual dating helps develop an emotional connection with a prospective partner and is very much like online dating of the late 90s, where physical meet-ups were a bonus, not an expectation.

“What I’ve noticed is that the men I’m meeting virtually are getting more creative and I’m making deeper connections with people online – there’s been this seismic tonal shift in connecting with people virtually since the pandemic intensified a few weeks ago,” a Bumble user was quoted as saying by the company in a statement.

Maybe it’s because there is no pressure to meet people in person, no pressure to look for a perfect date location, or just the shared uncertainty of our times — people are finding themselves becoming more vulnerable than ever with their online matches. According to Bumble users, virtual dating has allowed them to create stronger connections during the shelter-in-place or lockdown.

The OkCupid survey also saw a 5% increase in users looking for long-term relationships and a 20% decrease in users looking for hookups, just in the past two weeks. Further, when asked ‘what’s the best part of virtual dating’ most respondents (38%) said that ‘it’s less pressure’, closely followed by 37% respondents choosing ‘I can get to know the other person better’ while 25% said ‘I can wear whatever I want’. 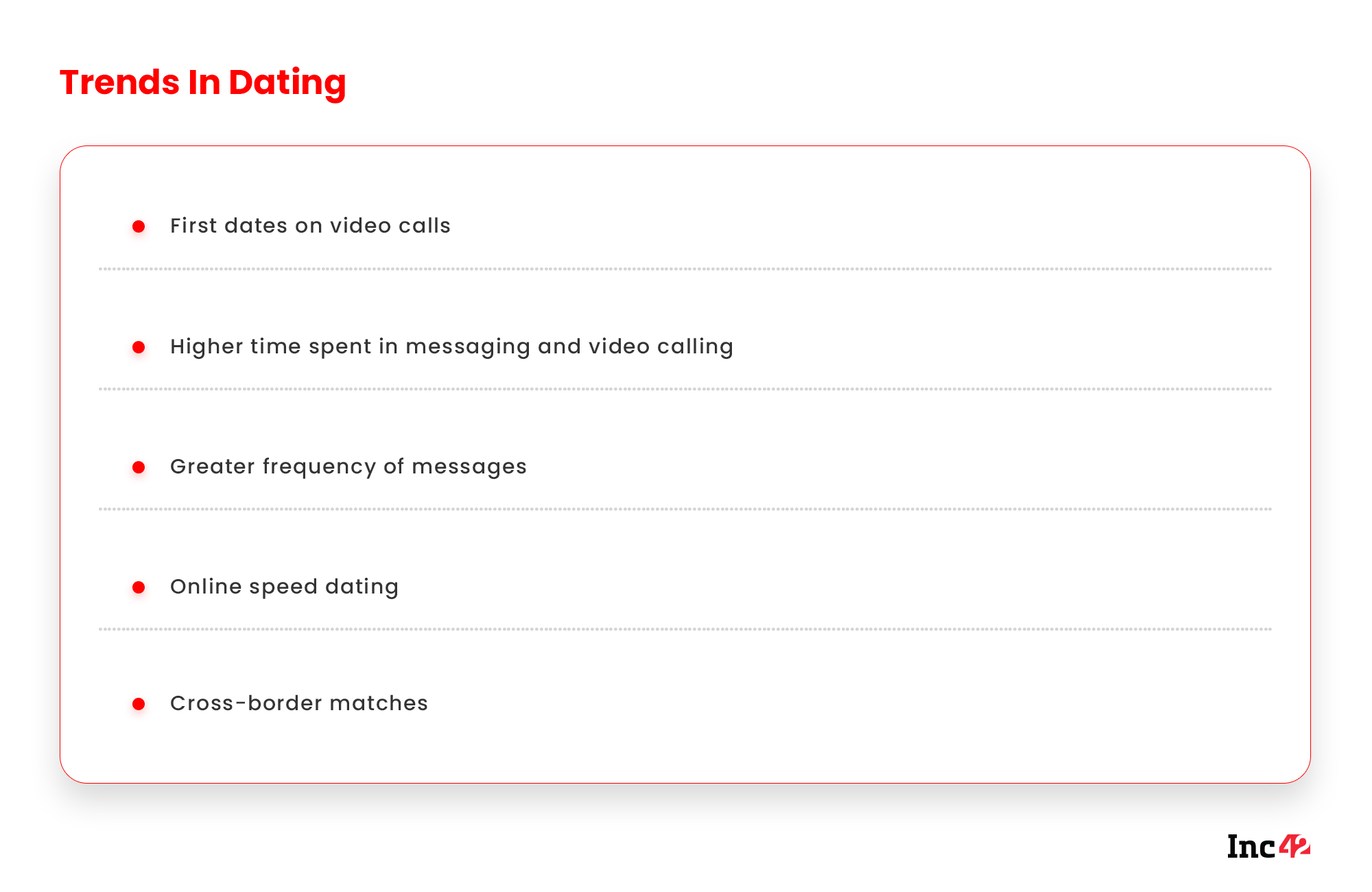 Virtual Dating Matures In The Lockdown

The pandemic has been horrible for most businesses but it has led to greater cultural acceptance of video platforms, like video conferencing, in-gaming video chats, and more. Zach Schleien, CEO of a video-first dating platform Filter Off which recently launched in India and is offering video-first dating experience, told Inc42, “Before Tinder came people would have found dating apps weird and would feel very uncomfortable with sharing. Today, these apps aren’t weird anymore. Pandemic has done the same for video dating and I believe video is here to stay even after the pandemic.”

He added that virtual dating is much more efficient than swiping, getting numbers, texting, and knowing a person better after the meeting. Here, people get to meet their partner right away. Bumble’s vice president of strategy, Priti Joshi, also expects these and other user behavioural trends to evolve as more and more people look for ways to combat isolation and engage in one-on-one virtual connections in line with social distancing.

Wooing a fresh match in a pandemic takes a lot more work. With the quarantine in play, men and women on dating apps can’t just waltz up to their matches on Bumble or Tinder armed with just the right line. It’s the ones that can make deeper conversations that are winning hearts and that means taking the time to frame messages with substance, sensitivity and patience these days.

Who knew it would take a pandemic to bring back the 19th-century tradition of courtship, where prospective couples got to know each other before deciding whether to go ahead with the engagement and subsequently, marriage. Of course, the modern version has a few more steps before that, but it’s heartwarming to see old courtesies make a return in these tough times. 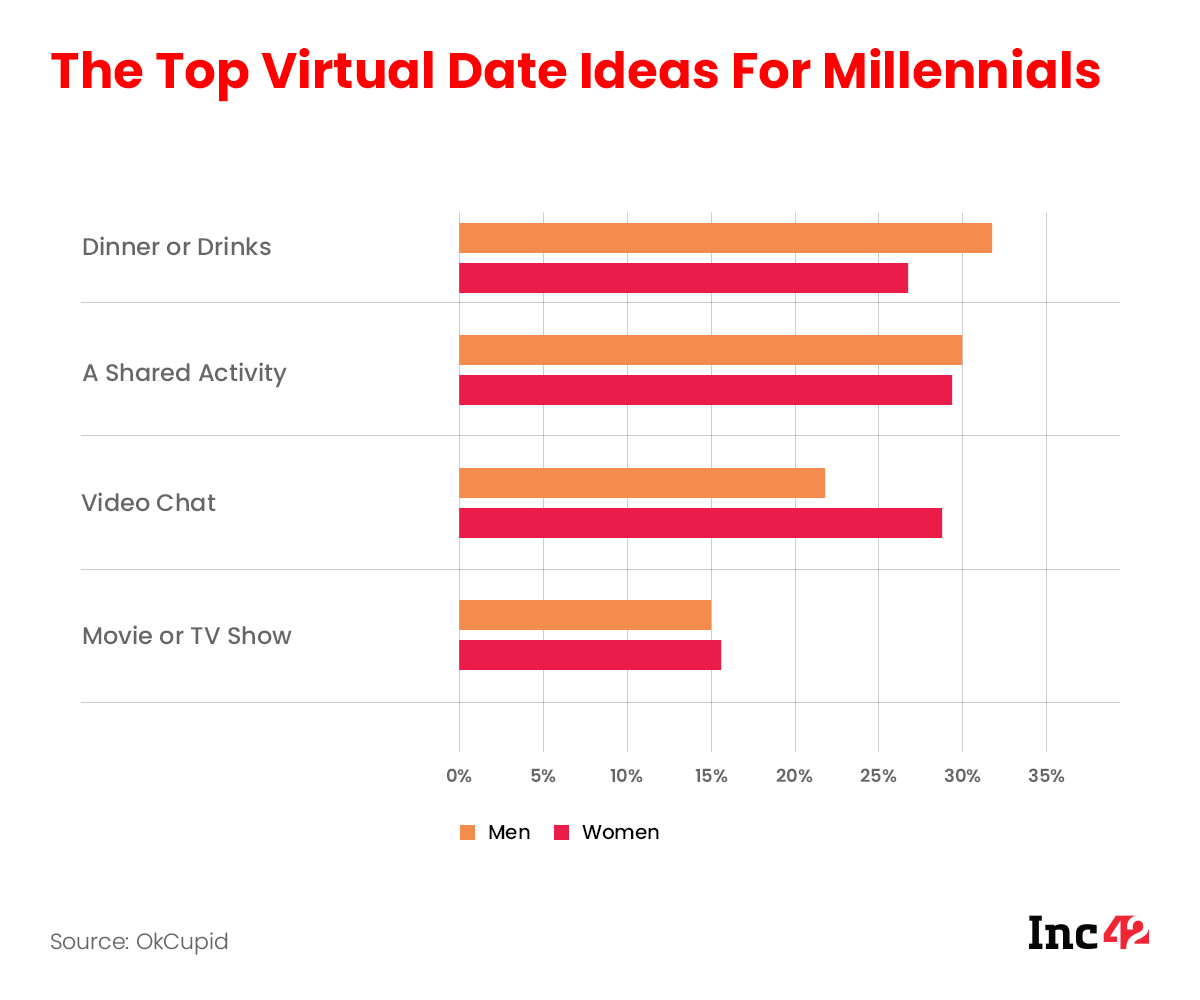 People have adopted new ways to engage with their dating partners in the virtual world. A night at the cinema has been replaced by the likes of Rave which allows people to sync movies or songs and also talk to their partners in real-time. Students are giving the age-old penpal tradition a go with anonymous email chains, while an Instagram account (Love Is Quarantine) has taken Netflix’s ‘Love Is Blind’ concept for a spin. Fancy a walk on a virtual beach? You can do that in Animal Crossing, and can even participate in online speed dating events.

Globally in cities like New York, online speed dating events have emerged as a new trend and Filter Off’s Schleien predicted this trend will soon come to India. “There will also be global quarantine events, where a user in India can join and date other singles around the world,” he said. 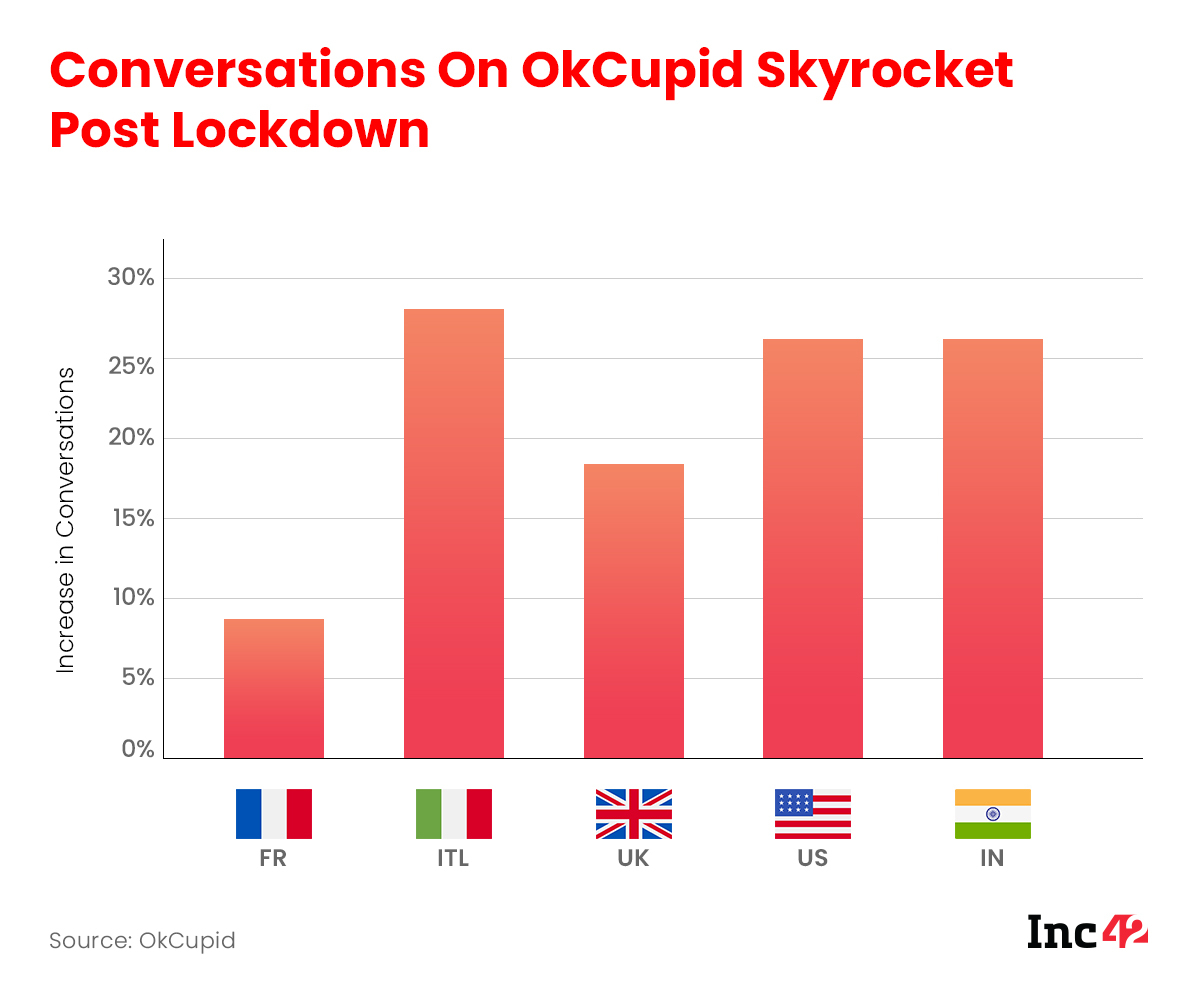 Indian dating platform QuackQuack also reported an 80% surge in its user base immediately after lockdown and with 18K new users daily, however, the surge has fallen since then, especially in the first week of May. The company’s users are scattered throughout the country though the majority 60% are from Tier 2 and Tier 3 cities and the rest 40% are from metropolitan areas, which are largely red zones.

“We saw a dip in signups for a few days when the lockdown was relaxed in green and orange zones, perhaps, people had other important things to take care of as soon as the lockdown norms were relaxed,” said Ravi Mittal, founder and CEO of QuackQuack.

Another Indian dating app TrulyMadly also saw a similar spike in its user base but this later stabilised at around 25%-30% above normal levels. Further, the platform’s daily active users (DAUs) went up by 31.2% and the daily average time spent on the platform also grew by 27.7%.

The Dark Side Of Online Dating

Of course, it’s not all peaches and cream — any increase in meaningful virtual dates also comes with increased harassment. According to a 2019 study by Pew Research Center, about 37% online dating users have said that someone through a dating site or app continued to contact them after they said they were not interested, 35% said that they have received unsolicited sexually explicit message or image and 28% claim to have been called by an offensive name.

QuackQuack’s Mittal also noted that before Covid-19 the platform used to ban about 5-10% new profiles every day on suspicion. “Having said that, the numbers have certainly gone up post lockdown as more scammers are looking for gullible people online,” he added.

Even as individuals are coping with the new reality for online interactions, the ‘Bois Locker Room’ incident has come as an added reality check for the society. Facebook’s transparency report has further revealed that Instagram flagged 1 Mn pieces of content that showcased child nudity or other acts of sexual exploitation in the first quarter of 2020. The platform had reported 685.5K Mn pieces of content in the Q4 of 2019 and also took action against 97.7% of such content.

Online dating companies have deployed various tools to help combat harassment on their platforms – from using artificial intelligence to providing in-app features to report abusive behaviour. For instance, Bumble has a feature where only the first initial of a person’s name would show on the Bumble Date profile to ensure their identity is protected until they are ready to share their full name with connections. In addition to this, Bumble also has features like real-time photo verification, and an AI tool called private detector which detects lewd images shared within a chat and blurs it for the user.

“This helps ensure that a person can’t be found on other platforms by those they don’t want to connect with”, said Bumble’s Joshi.

Earlier this year, Tinder also launched an integration with personal safety app called Noonlight, which connects users to personal emergency services including photo verification which compares a photo clicked in real-time to the user’s profile photos to verify the authenticity and build trust.

While meeting in the physical world is definitely not impossible, people are bound to depend on their partner’s social media personas in order to know them better. This can be harmless or used as a way to get back at someone for rejections. Violent responses and harassment over rejection are visibly higher when it comes to sexual minorities and other minority groups.

In the offline world, friends and family come to our rescue in difficult situations, but the abuse leaves a deep mark nonetheless and when it happens online, it can be a very lonely experience for the survivor. Instances of online abuse are usually brushed off as a non-issue in the society and that’s why there is a need for better regulatory frameworks to protect people from online harassment.