PUBG Mobile put India on the esports map, but will its vacuum mean that the Indian market will fall behind global peers?

Indian esports revenue will account for around 9.8% of the global market in 2020 and esports audience is expected to reach 17 Mn by the end of the year

While the ban on PUBG Mobile has created some uncertainty for the future of the esports market in India, the online gaming industry and startups continue to be bullish about the opportunity in this space. Given that it was the prominent game for competitive tournaments in the past couple of years, there is bound to be some flux, but the market is expected to bounce back with the likes of Call of Duty Mobile, Garena FreeFire, and even Indian alternatives such as FAUG expected to take the place of PUBG Mobile.

PUBG Mobile put India on the esports map, but will its vacuum mean that the Indian market will fall behind global peers? Before we get to that, it’s imperative to see how India stacks up against other leading esports geographies.

Esports is one industry that is witnessing a big boom amid the widespread impact on various economic sectors in the wake of the Covid-19 pandemic. This growth can be attributed to the worldwide practice of social distancing and reduced consumer and business activity in the outside world. Online gaming is offering an engaging distraction for people at home due to near-global lockdown.

According to Newzoo, which tracks the global esports market, esports companies are estimated to generate collective revenue of $973.9 Mn in 2020 with YOY growth of 1.7%. Around, 76.7% of these revenues will come from sponsorships and media rights, accounting for $747.4 Mn. China is the largest esports market in terms of revenue, contributing around 35% to the global esports revenues this year. It is followed by North America and Western Europe.

The growth in the global market is due to the rise in the esports audience, which will cross the 495 Mn mark at the end of this year. Mobile-based competitive gaming and esports are driving the growth in emerging markets such as India, Southeast Asia, Brazil, which is where PUBG Mobile has seen tremendous growth.

In 2020, over 2 Bn people are expected to be aware of esports worldwide so the top of the funnel for esports is widening by the millions as we write this. China will continue to be the market that will contribute the most to this number, with 530.4 Mn esports-aware people in the country.

India is fast emerging as the next hot destination for esports games and companies, given the huge penetration seen by PUBG Mobile. An estimated 175 Mn-plus users in India had downloaded the game, so the Indian market is on pace to compete with its global counterparts when adding this number to the audience and gamer base for other games and non-mobile esports.

Additionally, the rise in awareness of esports in the emerging markets such as India, largely due to urbanization and advancement in digital infrastructure, coupled with greater adoption for mobile-first games. Will India be the next big esports destination for gaming companies?

The Indian esports market is at a nascent stage — despite the huge buzz and clamour around the ban on PUBG Mobile. It is safe to say that only a minority of the overall smartphone user base is esports enthusiasts, yet the number of smartphone users is growing faster in India than in any other country.

India is anticipated to contribute around 9.8% to the global esports market in 2020, with aggregate revenue of $95 Mn in FY21, as seen in the analysis in the latest Inc42 Plus report — “Esports In India: Market Landscape Report, 2020”.

The growth in the esports market has already been catalysed by the Covid-19 induced lockdown. One of the biggest reasons for esports to receive a favourable response during the pandemic is that it promoted social distancing and staying at home. It also allowed people to connect with their friends and colleagues over games.

Even those users who are not gamers participated in greater numbers during the lockdown. In terms of viewership, esports events saw week-on-week growth of 61% and 66% in the two weeks between March 14 and March 27, 2020 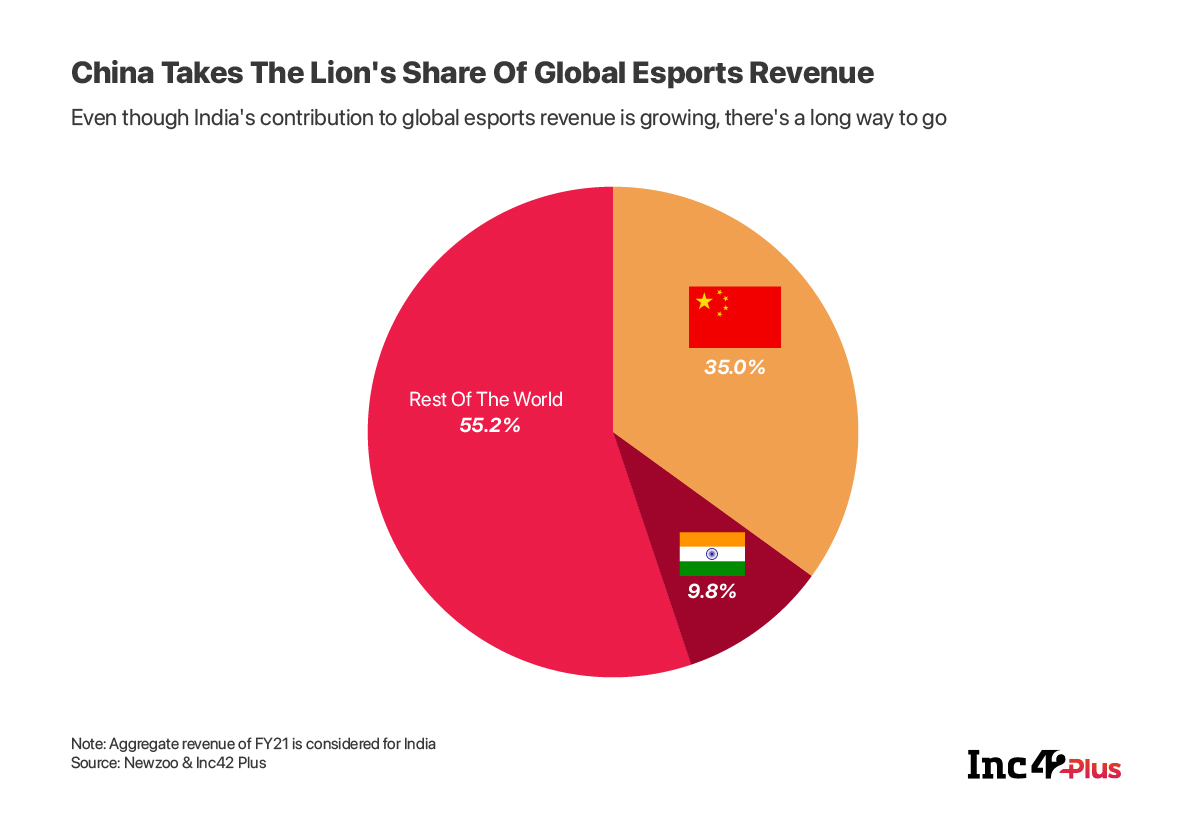 China is estimated to remain the largest esports market in 2020, with a projected revenue of $340.8 Mn in 2020 and being home to the largest esports audience (162.6 Mn). Revenues from esports tournaments and livestreaming are expected to be the main propellant for the market’s growth. Mobile esports revenue dominated a large part of China’s esports market in 2020, but the fact that many of the Chinese games have been banned in India could have an adverse impact on the revenue generation of these companies, provided they had a significant user base in India. 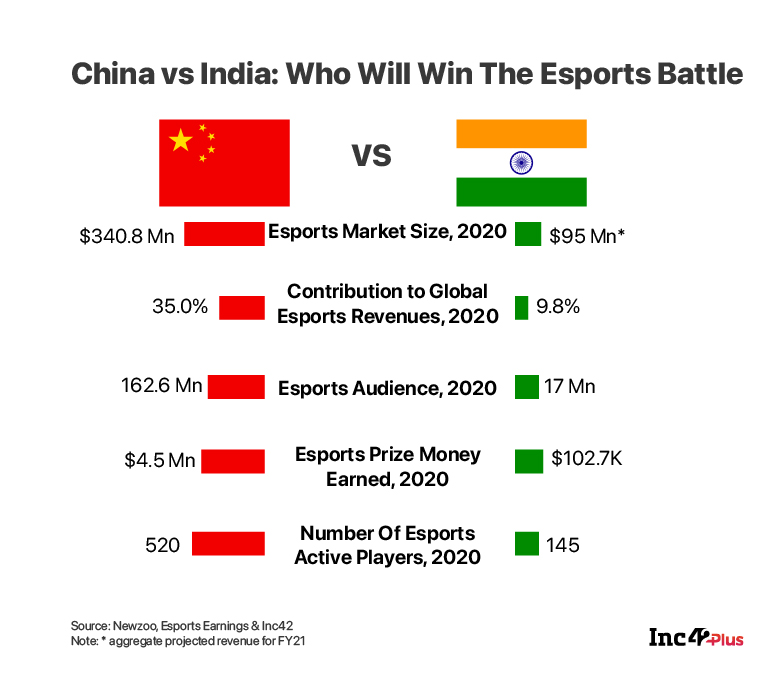 Esports has conquered geographies in terms of popularity and rapidly grown out of a cult following to form a universal fan base, especially among the millennials and Gen Z. But the esports follower market in India is only 3.1% of the total global esports audience. However, due to the growing number of championships, this number is expected to grow multifold in the coming years. India’s low base is also expected to be a factor in the rapid growth expected in the next few years. 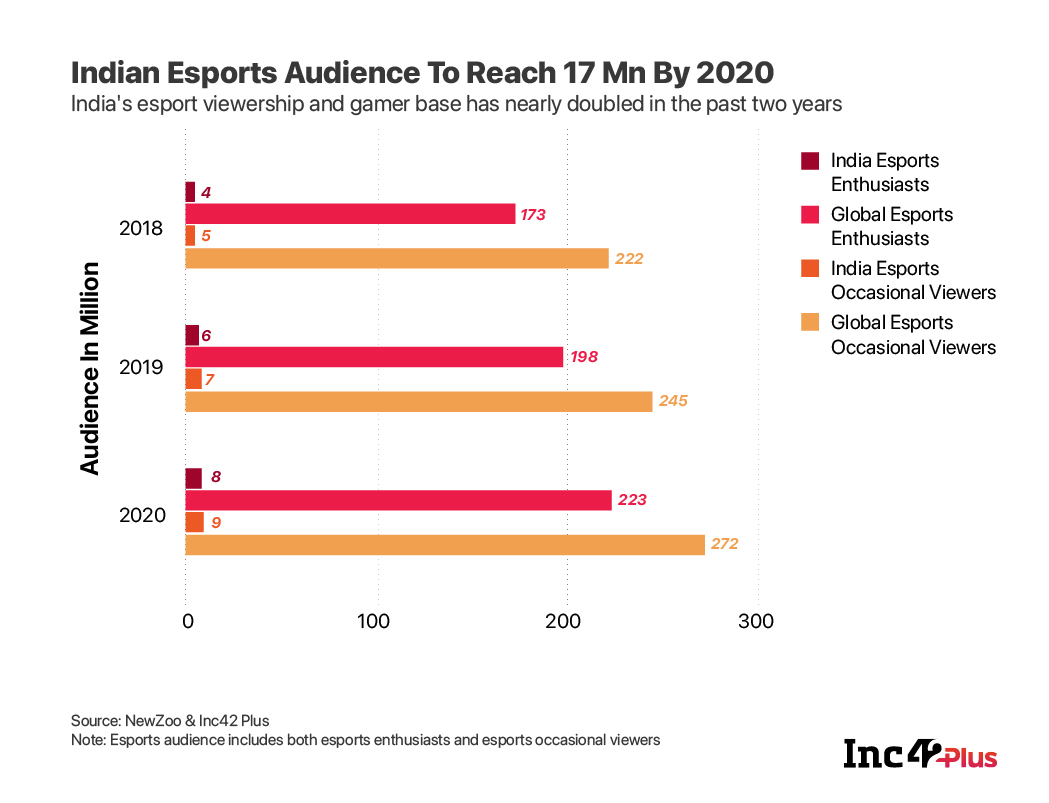 While esports in India is still at a nascent stage, it is rapidly growing due to the proliferation of high-end smartphones at affordable prices, as well as the rise of mobile games such as PUBG Mobile (now banned), Free Fire, Clash of Legends, Call of Duty Mobile among bigger PC and console games such as Dota 2, CS:GO, Rocket League, Fortnite and PUBG (PC version) and others. Coupled with deeper penetration for high-speed 4G internet and a rise in the number of online gamers, the esports market has all the ingredients for growth. This also brought in increased attention from investors in the pre-Covid phase, which is likely to continue in the future as well.

The Way Forward For Indian Esports

The India esports market got much-required push due to the Covid-19 induced lockdown, but the time is now to capitalise on this. The Indian gamer and esports viewer need new games to fill the PUBG-sized void. Will the Indian alternatives fill the gap or will it be global mega-hits such as Call of Duty Mobile, Free Fire, Fortnite, and others? Or will the mature PC and console (Playstation and Xbox) esports ecosystem take over from mobile gaming?

Although the PUBG ban has created questions on the future of the esports market in India, there are chances that PUBG Mobile may re-enter the Indian market. Until then, it’s up to new risers in the gaming industry to take over.

As per our analysis, the Indian market is expected to reach $175 Mn in terms of aggregated revenue by 2023, growing on the back off the higher game engagement, more viewership, bigger esports tournaments, along with the growing number of platforms and esports enthusiasts — the rise of cloud-based game streaming is also expected to be a game-changer in India, but that will only achieve penetration once 5G networks go live or when broadband internet penetration improves beyond the Tier 1 cities.