Violence & Nudity: The Dark Underbelly Of OTT In India

As per studies, the average attention span is just 8 seconds

To what extent will the market participants go to attract maximum attention?

Content creation and consumption are both increasing at an unprecedented rate and will have to grow exponentially to keep up with the skyrocketing demand in the Indian market. But the big challenge for companies is aligning their operations and leveraging data to streamline the content creation efforts.

By 2025 it is estimated that 463 Bn gigabyte data will be created per day and a lot of this will be used to determine what kind of content consumers want. This is a surge of 10.5 times compared to the 44 Bn gigabyte of daily data created in 2016. The wider penetration of internet services and smart devices are the two primary reasons behind the surge in content consumption in India. The advent of an internet economy has made grabbing eyeballs — and therefore consumer attention — a crucial success factor for entertainment companies and startups, particularly the OTT video streaming market.

A study by Microsoft in 2015, noted that the average human attention span has decreased over the decade, from 12 seconds (in 2000) to 8 seconds (2015) and with short videos driving much of the social media consumption these days, this is bound to drop further. Therefore, beyond just creating content, startups have to consider what kind of content will work.

In our latest report which measures the impact of Covid-19 on the Indian startup ecosystem, we concluded that there was a surge in total session time per user among major OTT platforms such as Netflix (73%), Amazon Prime Video (47%) and MX Player (27%) between 5 February to 29 March 2020. 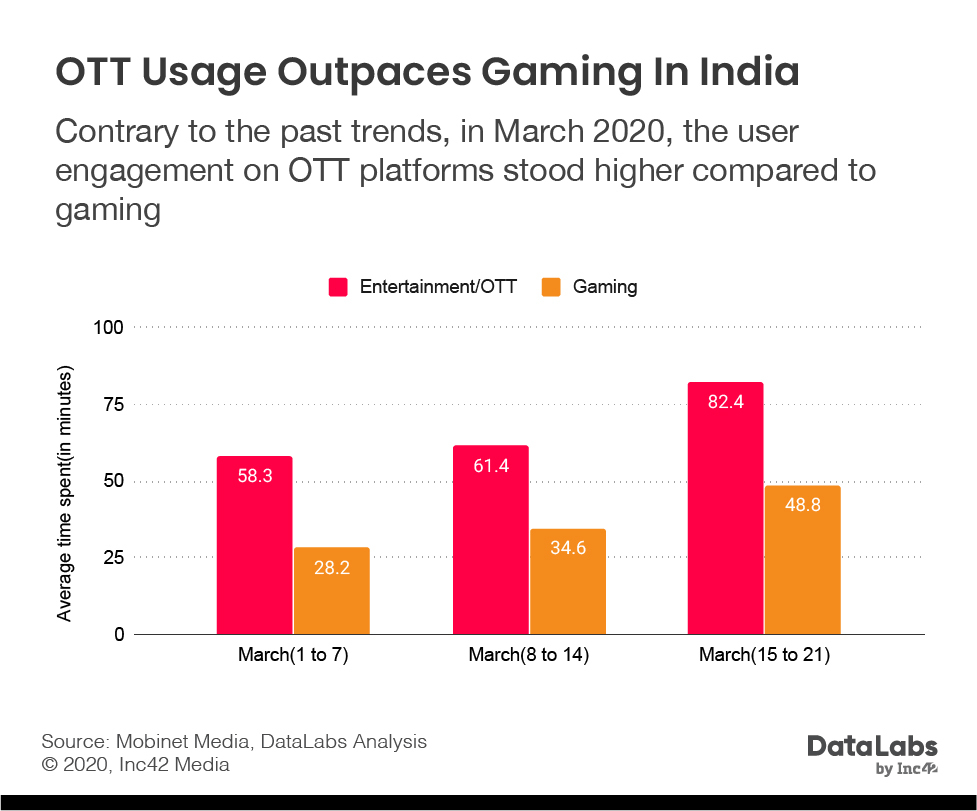 There is no doubt that OTT and gaming are two of the most prominent sectors in the Indian attention economy but the advantage which OTT has over gaming is that it requires relatively less effort and time for meaningful user engagement. In the post-pandemic India when time limitations on a person’s daily schedule resume back the engagement towards gaming will witness a higher degree of downfall compared to the OTT.

So how are OTT video streaming players gaining ground and becoming the flagbearers for the media and entertainment industry.

Having a vivid understanding of your customer persona has always been in the centre of business strategy formulation. A fine example of building products keeping your customers taste in mind in the media and entertainment industry is the story of Playboy magazine. Targeted towards young males, at the peak of its success at the end of 1960s, Playboy was being bought by a reported one-fourth of the college-going American male audience. With an ideology based on publishing “cute, frisky, and sexy content”, the best selling issue (November 1972) sold over 7 Mn copies and raked in $12 Mn for the company the same year. Similar to the Playboy, a number of media companies such as UK’s The Sun became a household name by cashing in on sex and its Page 3 models.

In a similar vein, the popularity of OTT video platforms in India is largely driven by the fact that they offer uncensored content without much censorship. Censorship in Indian television and cinema has long been debated by producers and artists, but OTT platforms in India don’t have any censorship board yet. This gives producers a free pass to experiment with content.

Artistic representation of adult themes and graphical sex or violence in motion pictures is not wrong in any manner or even new in fact. But India has a storied history of movie censorship so the older audiences believe it is important to keep a check on what kind of content is produced. However, uncensored content is proving to be a major attraction for younger Indian adults which are the primary audience for OTT players.

However, the bigger effort by tech companies is to ensure that such content is only accessible to individuals above a certain age group (i.e above 18 years of age). 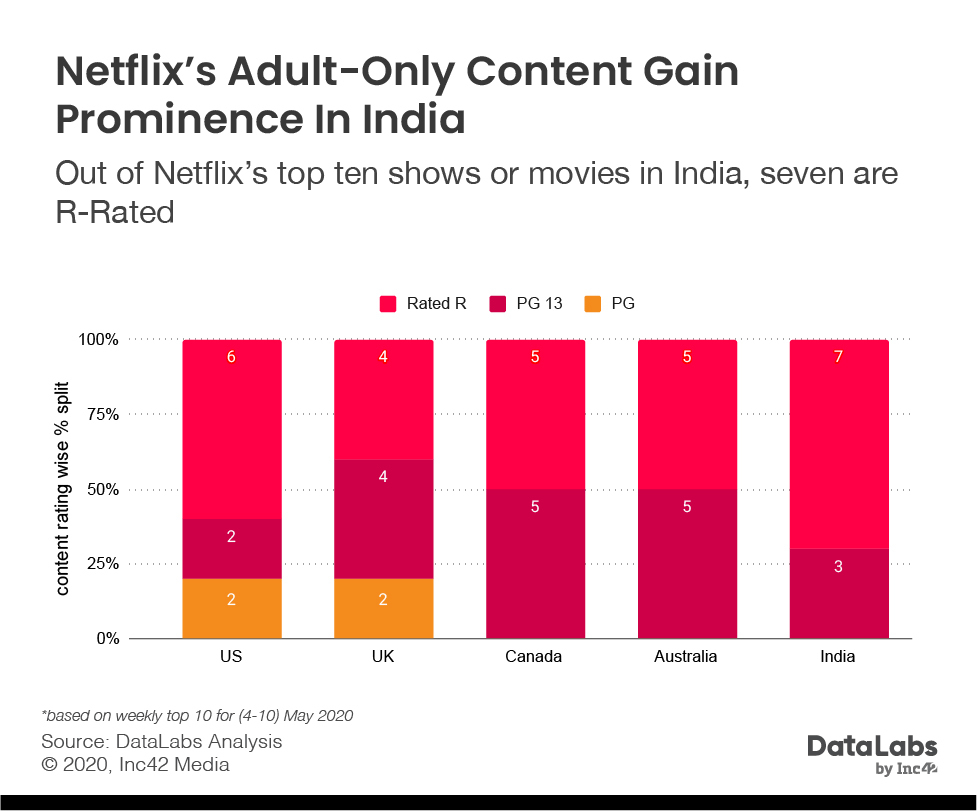 In order to decode the degree of adult-rated content, we analysed the content rating of Netflix’s top 10 charts across five geographies including India. We used the US film rating framework for all geographies for uniformity. The average share of R-rated content across these five countries was 54%. 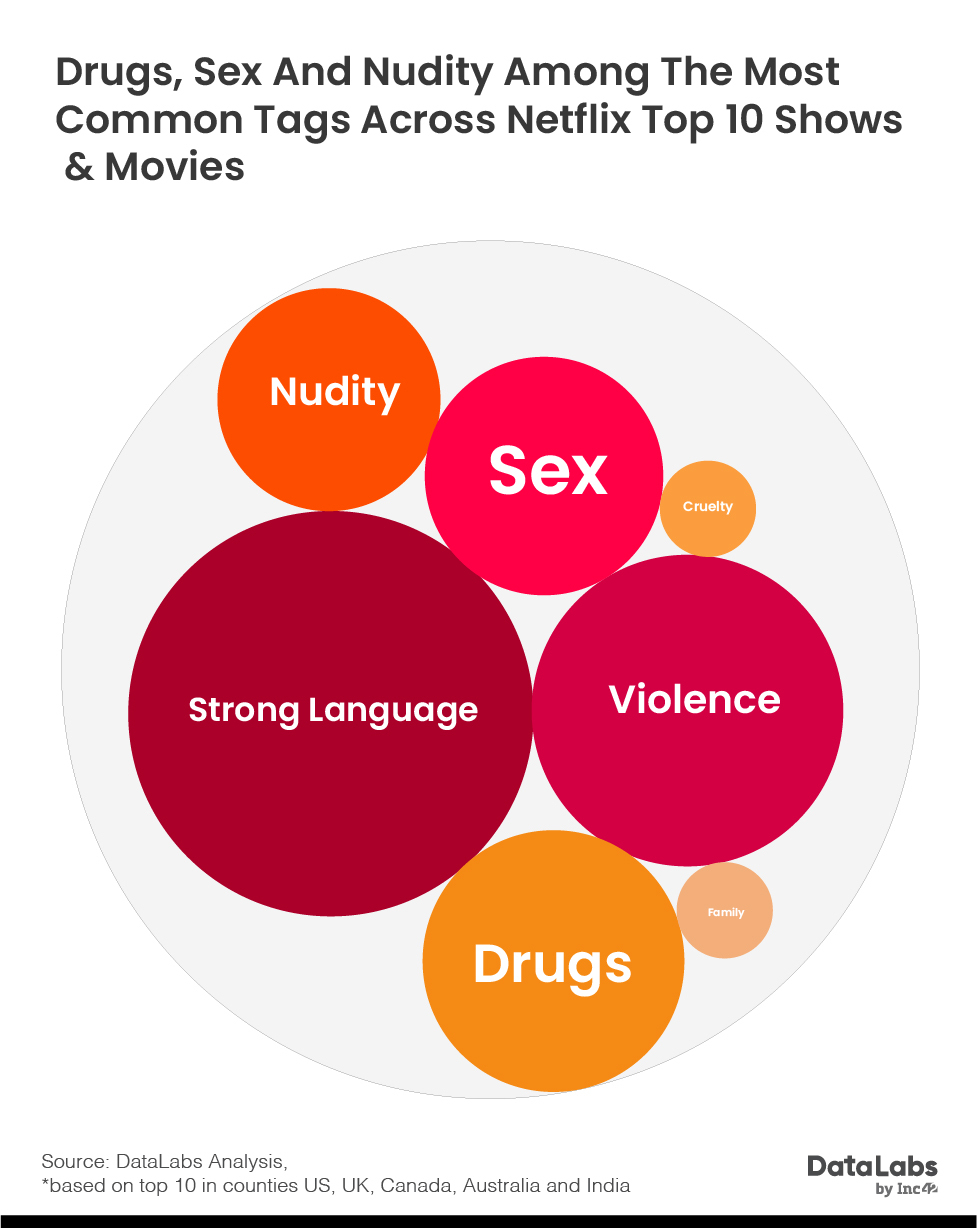 In addition to the mainstream players, there’s a host of adult-only OTT streaming apps in the Indian market, which have emerged in the past year or so. Kolkata-based 18+ streaming app Fliz Movies has over 1 Mn downloads on the Google Play Store, while HotShots Digital Entertainment and Kooku have also come up the ranks in terms of downloads. With adult-rated short films and movies, these platforms are targeting regional language audiences in Tier 2, 3 and beyond, where there is a bigger OTT opportunity. 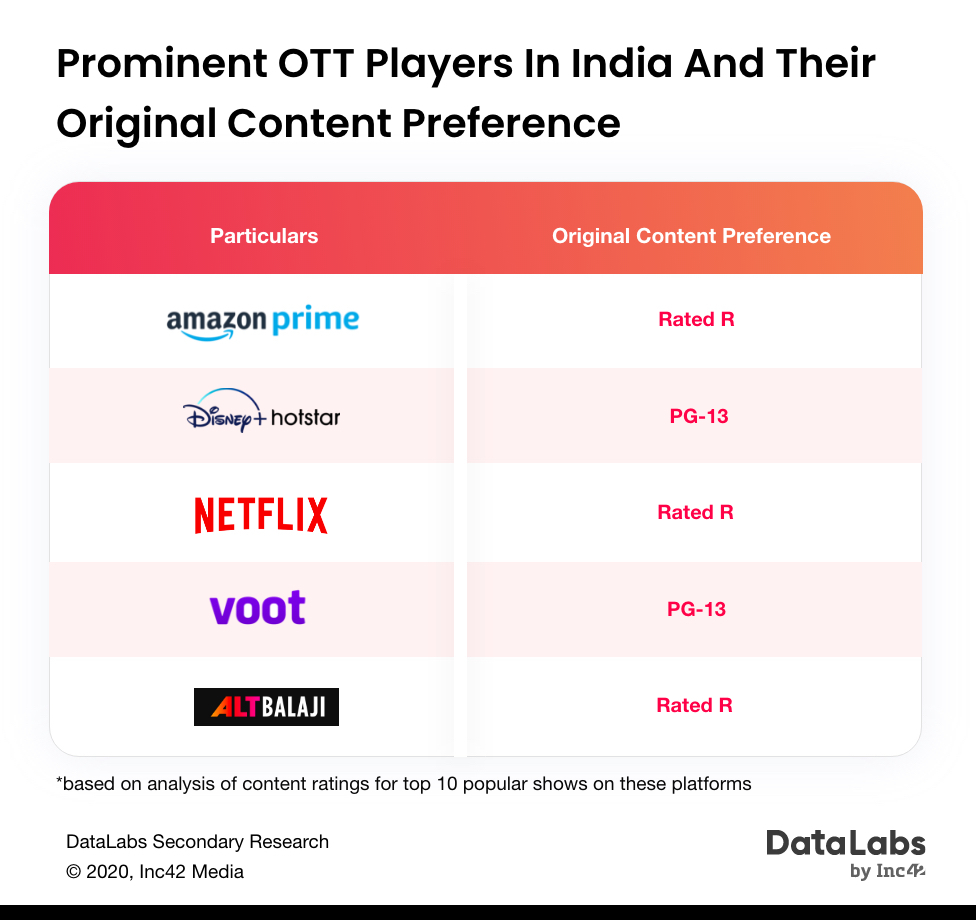 Given the gratuitous nudity or women-led imagery, male audiences are the primary target of many of these adults-only platforms. This is not surprising since the majority of the active internet user base in India is male (67%). But in Tier 1 cities, the gender split is more equitable with 59% male and 41% female active users.

However, with changing demographics in the internet population we are witnessing a surge in online web series and movies with adult content or bolder themes targeted towards female audiences as well. The success of Amazon Prime’s original ‘Four More Shots Please!’ is likely to pave the way for more such content in the near future.

Lack Of Censorship And R Rated Content: The USP For OTT Players

It is no secret that the young population of India is longing for adult-themed content and is tired of the over-censorship in mainstream television and movies. And content creators are happy to feed this demand, which has kept the OTT revolution ticking.

In post-lockdown India, the uncertainty in the context of movie theatre operations is high. Even though a green signal for full-fledged operations is given by the government, the fear of crowded environment is poised to hamper the financial performance of the movie theatres. This change in the society will further boost the transition from mainstream cinema to OTT disrupting another age-old media industry after television.

Even mainstream Bollywood movies are now looking to release on OTT platforms first. So as directors and actors experiment with unorthodox themes for OTT releases, even Bollywood cinema could get more adult-rated movies in the near future.