Mapping The Market: The OTT Video Streaming Landscape In India

Mapping The Market: The OTT Video Streaming Landscape In India 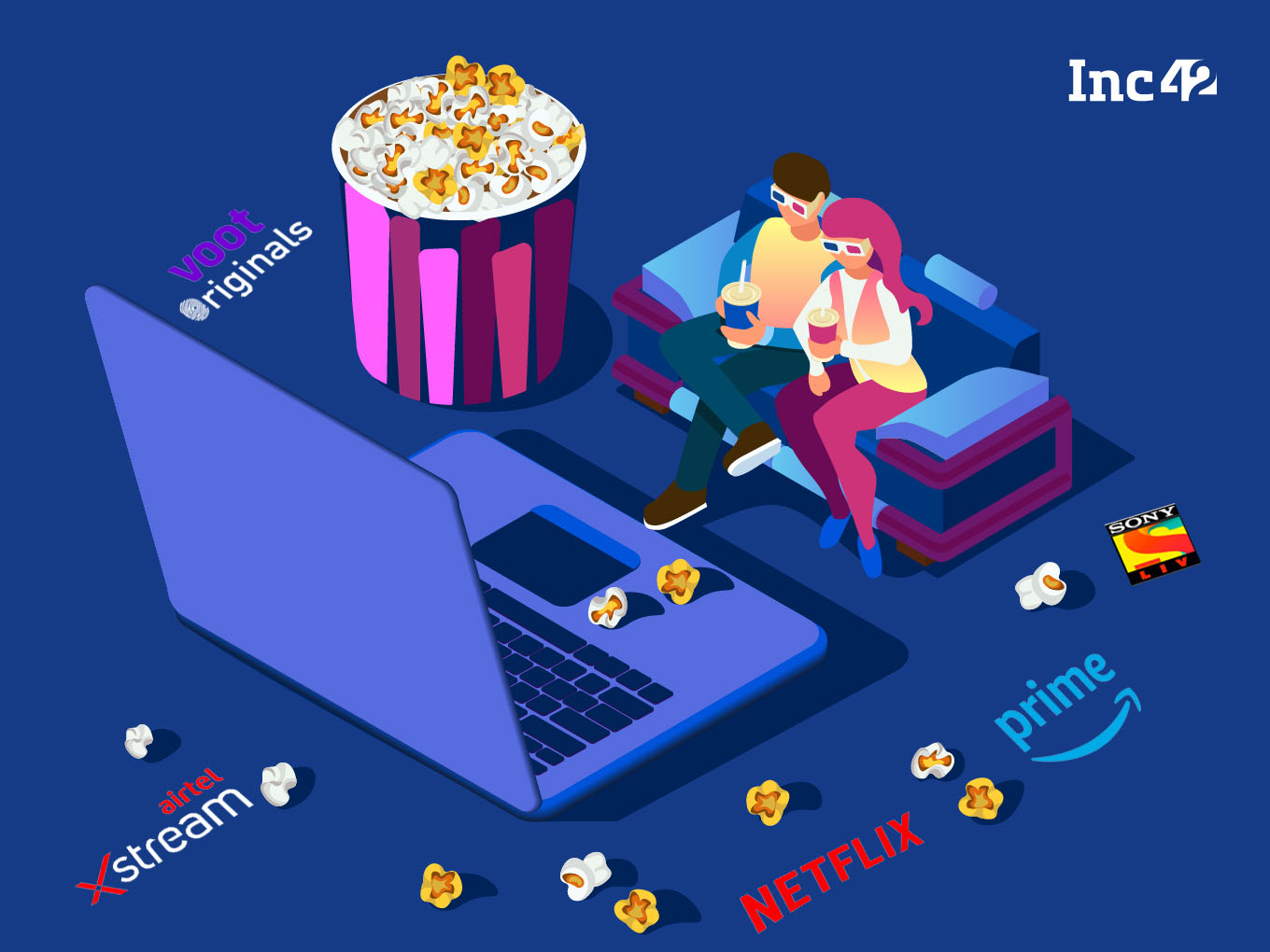 India will have more than 500 Mn online video subscribers by FY2023, according to KPMG

With over 30 OTT video streaming platforms, consumers are spoilt for choice

For a country with 560 Mn internet users, the numbers clocked by international OTT players are surprisingly low

India’s new-age millennial population, upwardly-mobile urban class and Generation Z audiences are spoilt for choice. With high bandwidth internet, low mobile data tariffs and access to the best smartphones and upcoming technologies, and the urge to consume content on-the-go has opened up an ever-rising opportunity for over-the-top (OTT) video streaming players in India.

The Indian consumer had his first experience with subscription-based video streaming when DTH player Tata Sky first launched its Showcase service in India in 2006. A user can rent a movie for the entire day and payment is deducted from the Tata Sky subscription plan. The entry of brands like EROS Now, Spuul, BigFlix (Reliance Entertainment) in 2012 and SonyLiv in 2013 played a crucial role in keeping the growing digital user base hooked to the screens.

There are currently 35+ video OTT players in India, catering to a subscriber-based userbase of 53.1 Mn (as of November 2019). In 2019 only, 11+ local and international players have marked their entry in this space. This clearly indicates towards an untapped opportunity in the Indian online video content sector.

Each OTT player in the Indian market is finding its own niche and struggling with its own challenges. Where the international players like Netflix, EROS Now, Amazon Prime are battling price vs content wars with the homegrown ones such as Zee5, Disney-owned Hotstar, Jio Cinema, MX player; At the same time, players like SUN NXT, ShemarooMe, Addatimes, Hoichoi, etc, are giving a tough fight over the regional content space to every other player.

Recently BSNL also joined the OTT bandwagon with BSNL TV. Also, Disney+ will soon make its debut in India next month. Hotstar has already been rebranded as Disney Plus Hotstar, ahead of Disney+ launch in India and beta version is live on Hotstar platform as well.

Hulu is another international player which Indian audiences are fond of. Although banned in India, people are seen using VPN service providers and Smart DNS proxies to access Hulu content in India. 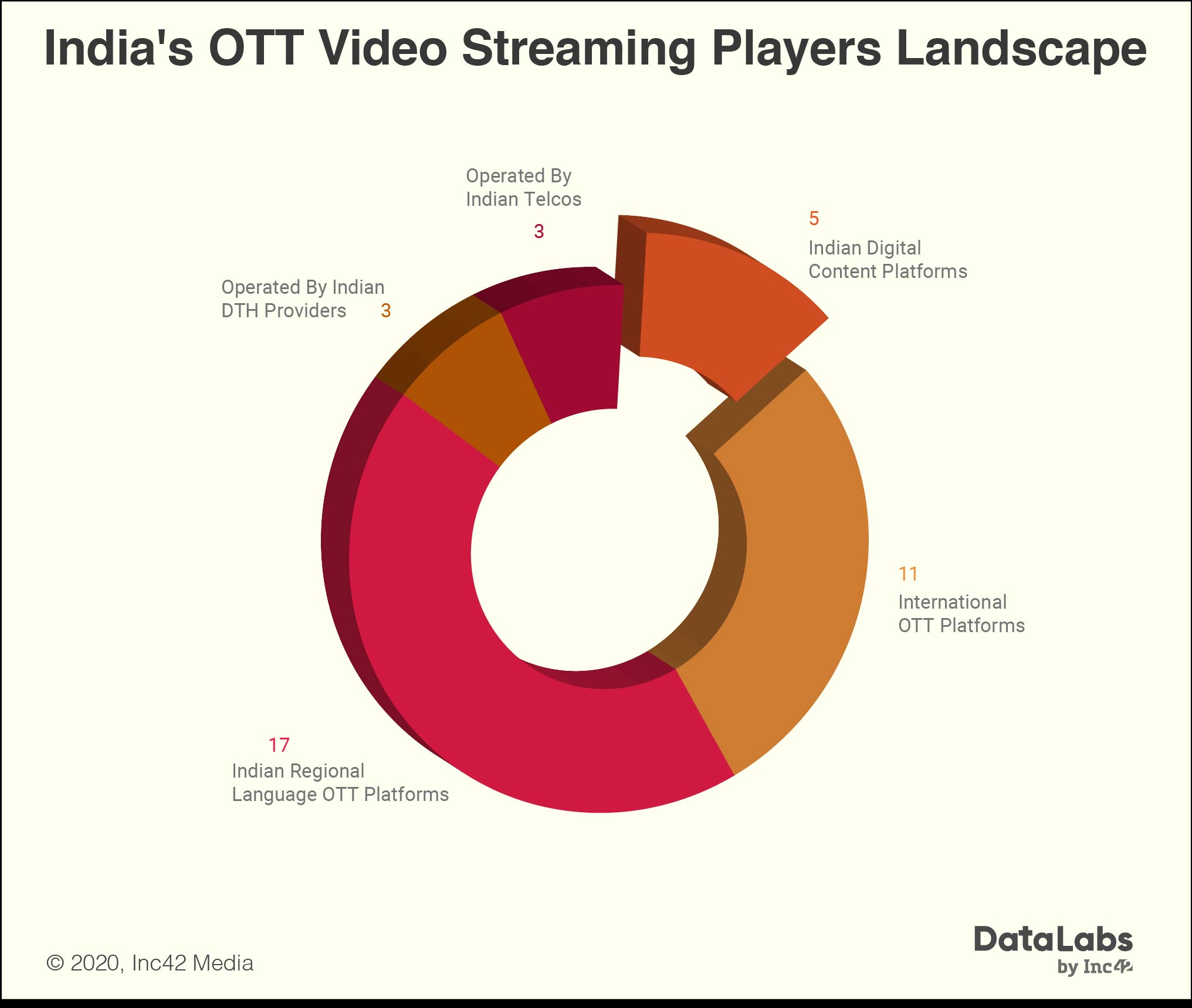 According to a November 2019 Boston Consulting Group (BCG) and Confederation of Indian Industry (CII) report, titled ‘The trillion (and growing) touchpoint story recognising the monetisation conundrum’, the average digital video consumption in India has witnessed a 2X growth in the last two years.

With monthly subscription plans as low as INR 99 (INR 49 for regional players), internet data plans and smartphones becoming cheaper by the day, there is no stopping for these players.

The fight between local and international players is on many fronts. Producing local content, building India-specific content libraries and exploring regional markets is just the tip of the iceberg when it comes to monetising the price-sensitive Indian audience. At the same time, digital platforms are in a cold war with rapidly emerging OTT platforms backed by telcos such as Reliance, Airtel as well as traditional DTH players like Tata Sky and Dish TV.

According to a whitepaper shared by Zee5 and accessed by Inc42, the digitally sophisticated user base preferring content behind the paywall had a cumulative size of just 18 Mn in 2018. This is quite low in comparison to the over 310 Mn digital mainstream users (in 2018) consuming video content online either free or bundled with telcos and other distribution platforms. 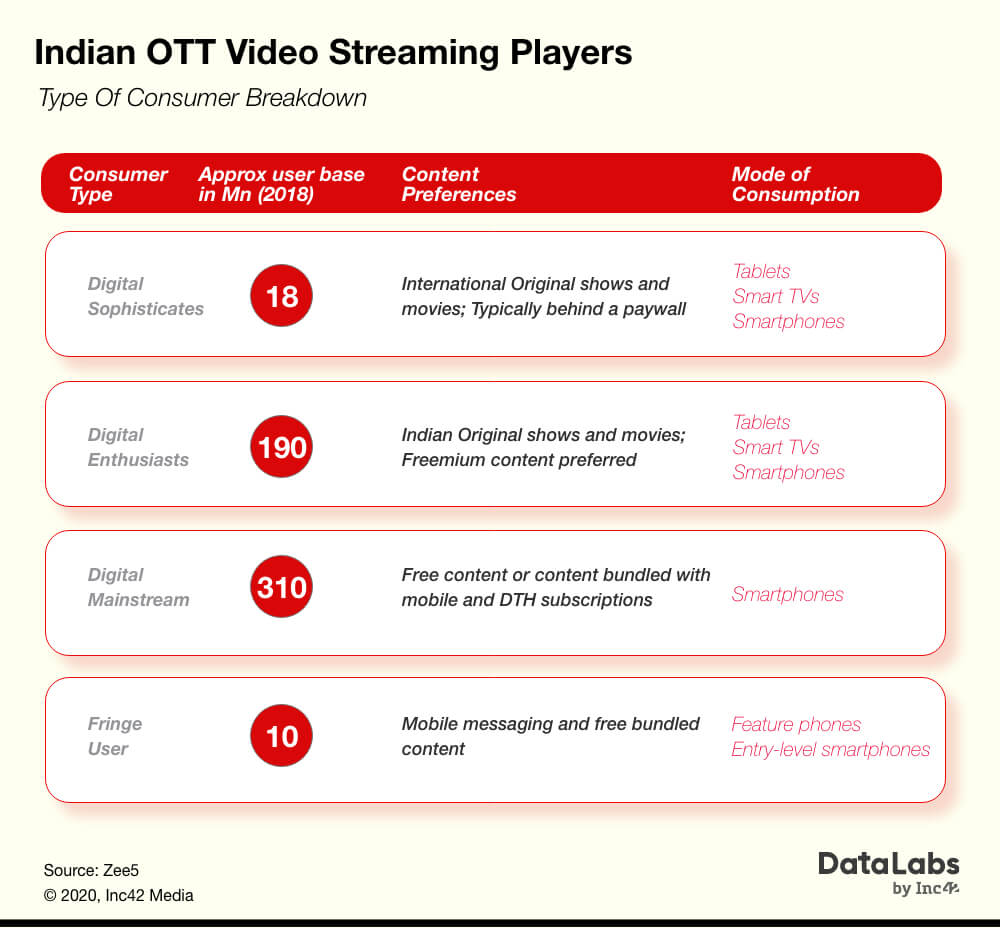 Crucially for OTT platforms using a subscription-only model, the ratio of only digital content consumers to mass consumers is abysmally low. This makes it harder for the likes of Netflix, Amazon Prime and others that don’t have a free tier. 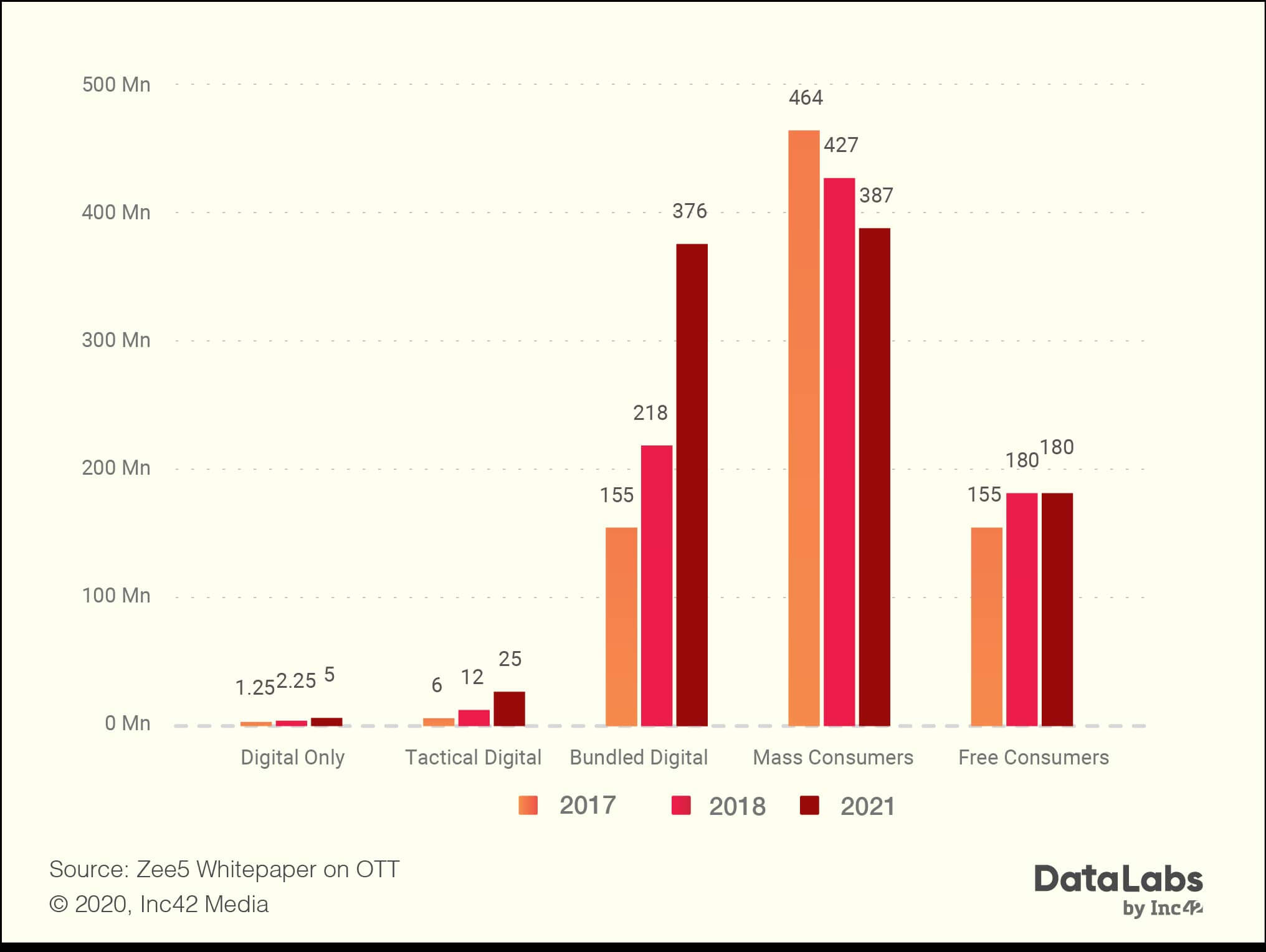 This is one big challenge for both the international and local players in India. The individual subscription packs are not exactly affordable for an average Indian consumer as compared to the bundled plans offered by telcos and DTH players. Buying subscription plans for multiple platforms is out of the question for most Indian internet users, with such a phenomenon only being observed in affluent classes in metros.

Here are the price packages and content value-adds offered by key OTT players operational in India. 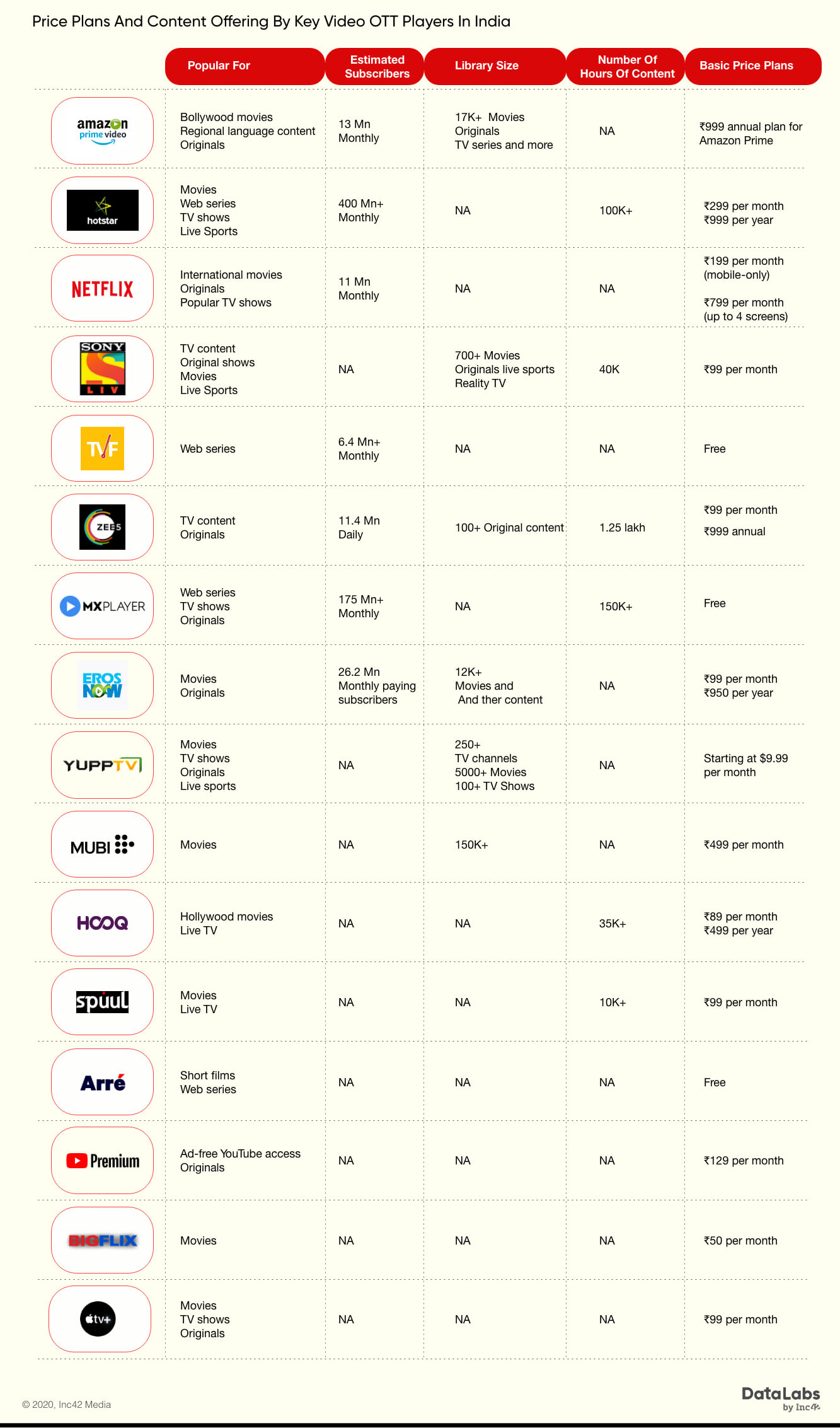 But this strategy does not seem to work well for most. To survive, either they have to let go of the monetisation or the unique user base share. For instance, Netflix which initially came with an INR 799 per month subscription plan was forced to retreat and offer more affordable plans, which are still the most expensive among all players.

Amazon Prime Video, despite being one of the key players in the international OTT video segment, is building partnerships with telcos to distribute its content to a larger audience. A key advantage for Prime Video is the allied services provided by Amazon Prime such as priority delivery, ad-free Amazon Prime Music and more.

Telcos are monetising their own online video streaming platforms as well while also backing independent platforms. The same is true for DTH players like Tata Sky.

The opportunity in the Indian OTT video streaming segment is immense. The Indian consumer today is not shy of experimenting. Given the low cost of data plans and smartphones, the market’s addressable base now includes digital mainstream users in the low to medium income group and fringe users having sporadic digital access.

Going by the numbers, India’s video streaming industry is expected to grow at a CAGR of 21.82% to reach INR 11,977 Cr by 2023, according to a report by global accounting firm PricewaterhouseCoopers (PwC).

For a country of over a billion people, and 560 Mn internet users, the numbers clocked by international OTT players are quite low though. Despite the rising online streaming and smart TV fad, people can still be found glued to their TV sets for daily soaps and movies.

According to CLSA data, the daily active user number of one of the leading international OTT services has dropped by 35% since last January 2020. Local players like Zee5, ALTBalaji, Ullu are also leading the way with original regional language content. This is a major chink in the armour for international platforms that Indian players are looking to capitalise.

All said the market is wide open for scale and growth. Growing partnerships amid the OTT players, telcos, and other distribution channels indicate the market is looking at growth through collaboration. While cut-throat competition is still not out of the picture, given the diversity in content, the winner, in the end, will be the consumer.