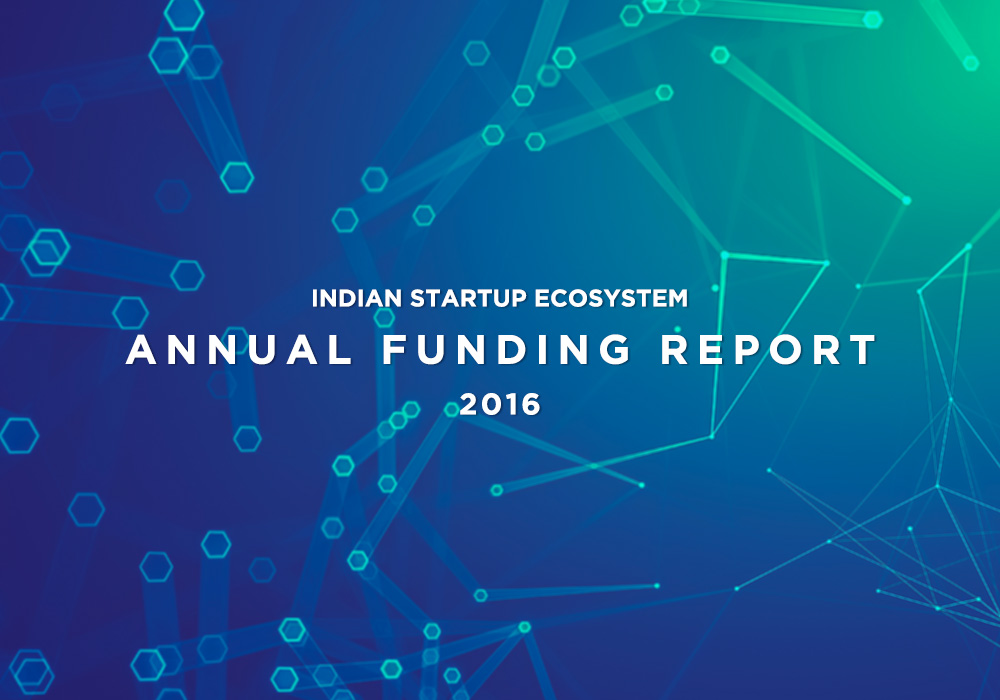 Let’s admit it, we’re glad 2016 is done with. RIP. After the highest of highs during 2015, we have witnessed what might be the lowest of lows this past year. Some might prematurely term it the beginning of the end for the Indian startup ecosystem, but we, at Inc42, believe that there is definitely more than meets the eye.

Before delving into the report card of our country’s internal startup trends, it is important to see how we figure on an international podium. Here, we trace the factors that outline the current and the future horizon of possibilities for a startup in some of the biggest startup hubs across the world. From the dynamism of entrepreneurship development, economic support and feasibility, to the market in which startups operate – we aim at informing our audience with an analytical overview of startup landscapes using the following infographic. 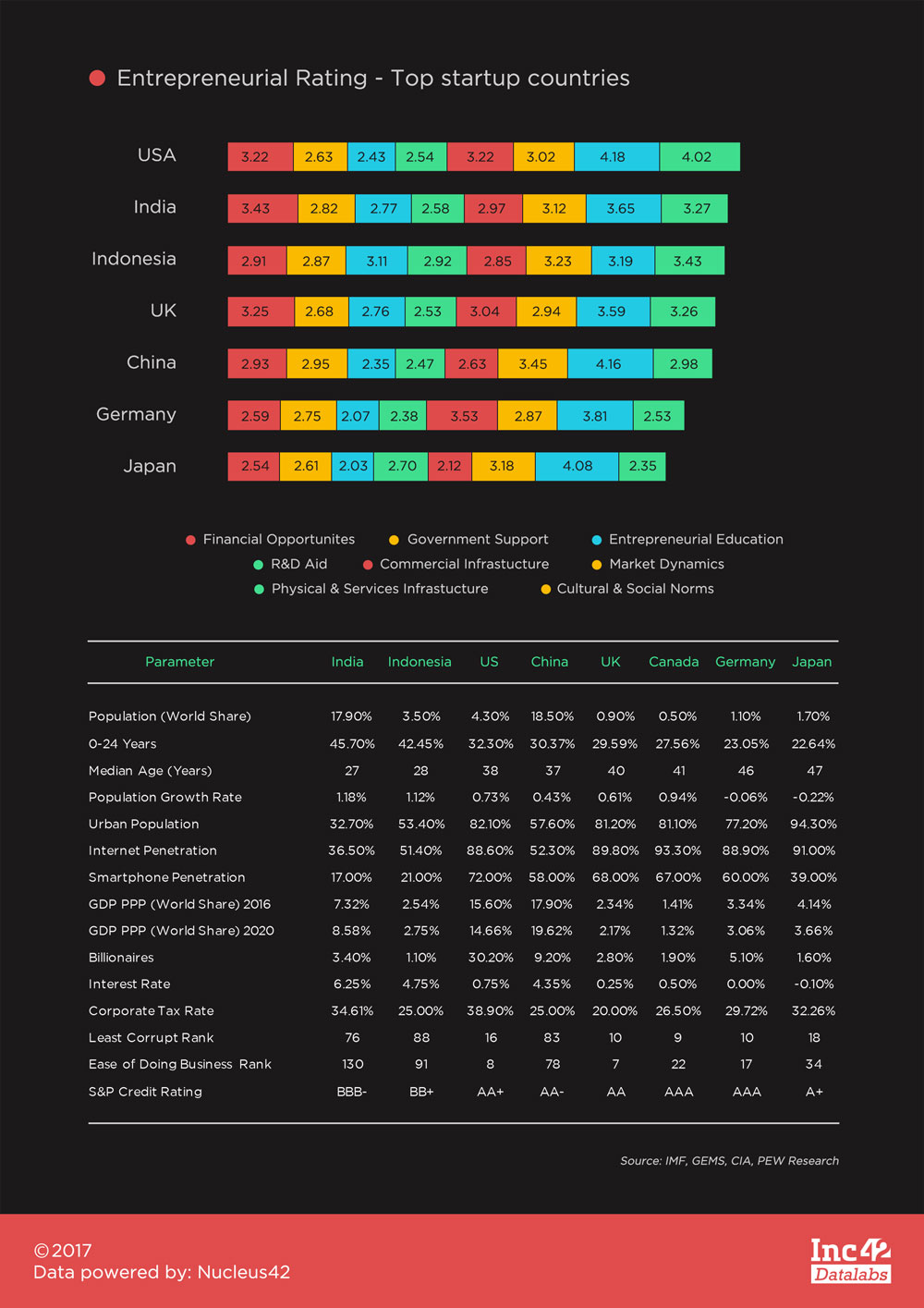 Asian and Non-Asian countries have been ranked based on their economic parameters: GDP, corporate tax rate, the number of billionaires, interest rate,  S&P credit ranking, ease of doing business and corruption rate. 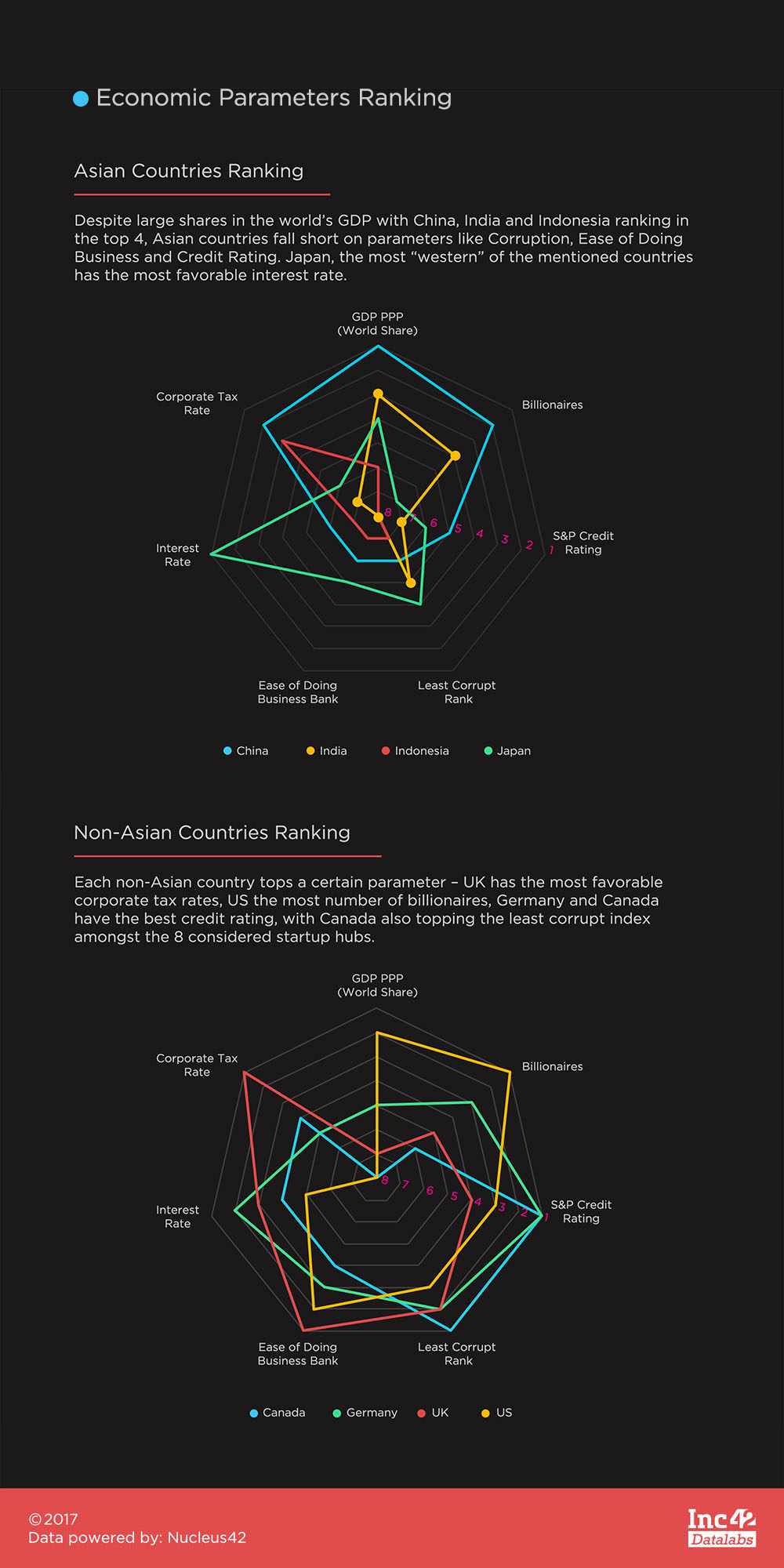 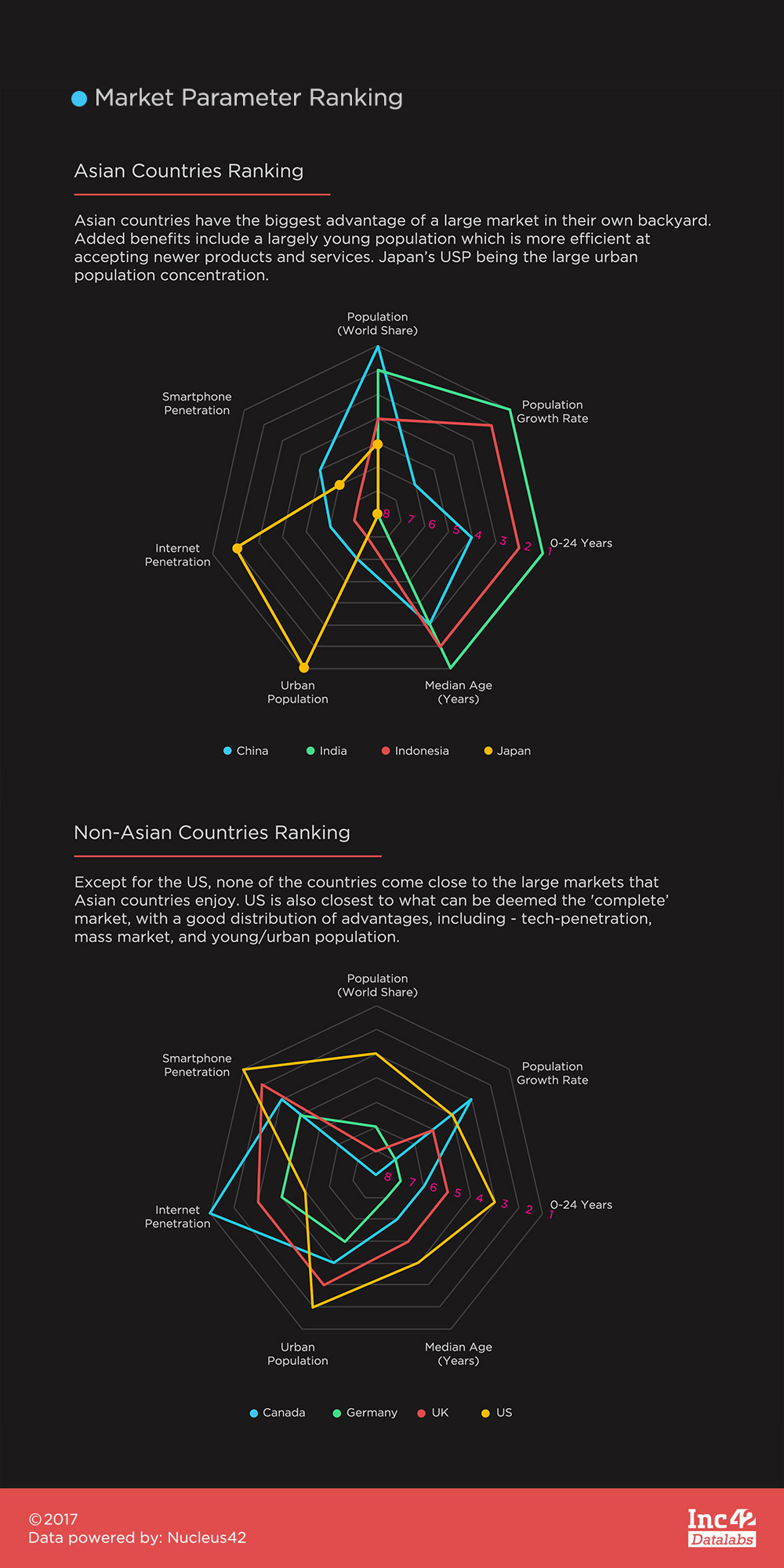 Data and its interpretation always have a strong truth to them, but they are misplaced without a sense of context. 2016 saw a definite slowdown, justified by the mob mentality with which angels and investors jumped onto the bandwagon of funding any and every startup that popped up because of the startup hype that was created by some big ticket fundings in 2015.

The slowdown is a manifestation of something India does best – over enthusiasm towards anything that is ‘in.’ This year will find its place in history as the year where senses and logic prevailed. Hooray!

The sharp 39% decline in year-on-year total funding, was almost equivalent to the sizable fundings received by Flipkart, Snapdeal, Ola in 2015 – in a war of who can burn more cash.

In actuality, 2016 witnessed buoyancy in investor confidence – showcased by the 18% increase in number of deals. This also figures into the drop in funding in Bengaluru – almost an exact match in investments grossed, if the money-burning outliers are factored in. Taking nothing away from Delhi/NCR, however, as the hub was the epicenter of (four of) the largest funding pulls of the year – a true tour de force.

Herein, we have a look at how the year panned out, in numbers. 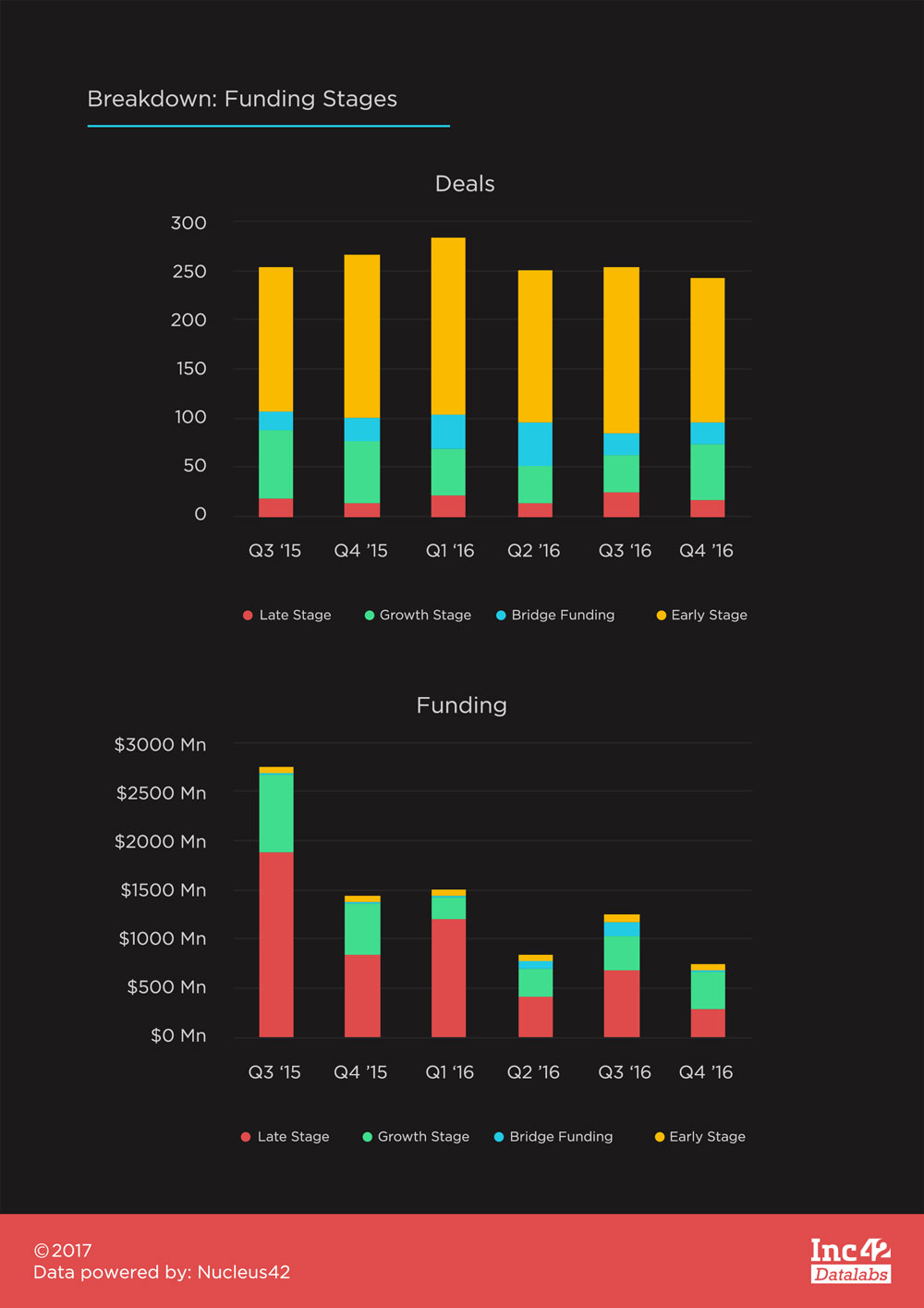 2015 saw the launch of three to four startups a day, which helped India secure the third position in the world in terms of number of startups – 4,200 and counting. Last year, a huge amount of money was poured into the startups—on very high valuations—with ideas that were building just the “me too businesses”.  With no defensibility, weak business metrics, and entrepreneurs, who were largely opportunistic, a lot of startups entered the ecosystem and even got considerable attention from investors.

In the meantime, around 31 startups that received funding between 2014-2016 have shutdown, and 32 have been acquired or pivoted to a different business model to survive.

2016 has truly been tough for startups. 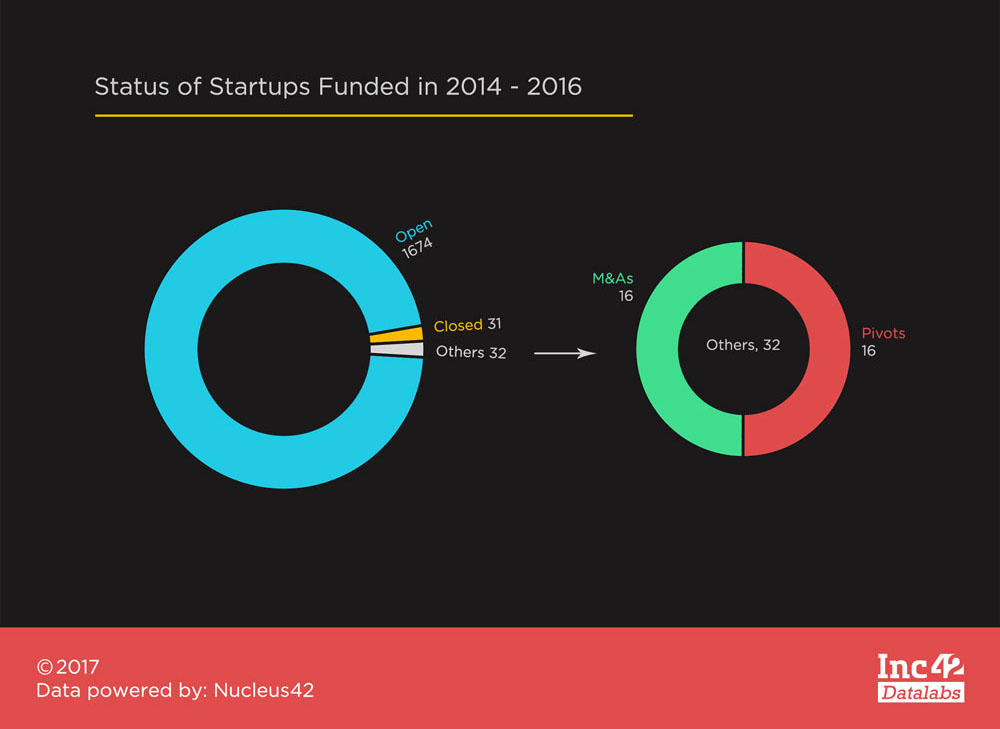 Key Sectors On The Rise 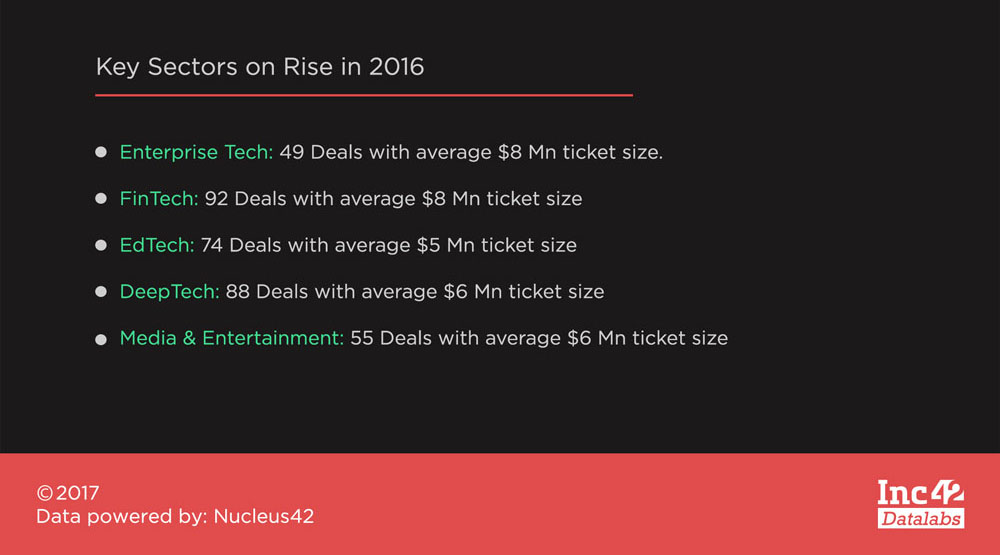 Even in 2016, ecommerce remains the top market for investment in India, accounting for almost 30% of total funding.

Healthtech, fintech, enterprise, edtech and media & entertainment are the sectors on the rise. Deeptech, majorly hardware, AI, AR-VR and IoT, is another sector that has come up in 2016. Lot of talks has been observed, however, funding has not been that prevalent in this sector.

Given the economic and social importance of these sectors, we wanted to highlight major facts and figures for them.

In 2016, around 115 deals were made in this sector with a total investment of $140.2 Mn. Although, it has not been a capital-intensive sector, startups have been working towards making healthcare more accessible to the public. India, where the doctor-patient ratio is in decimals, the demand for a more organised service is sure to boost the sector in 2017.

Around 96 deals with a total investment of $475 Mn was made to this sector in 2016. This year, fintech breathed a sigh of relief – leveraging digital financial services, making them more accessible to the public through e-payment, P2P payment, wallets, online loans, and investment plans.

Around 93 deals were made in this sector with a total investment of $377 Mn in 2016. It is almost the same as in 2015, in terms of deals, however, funding has considerably fallen. 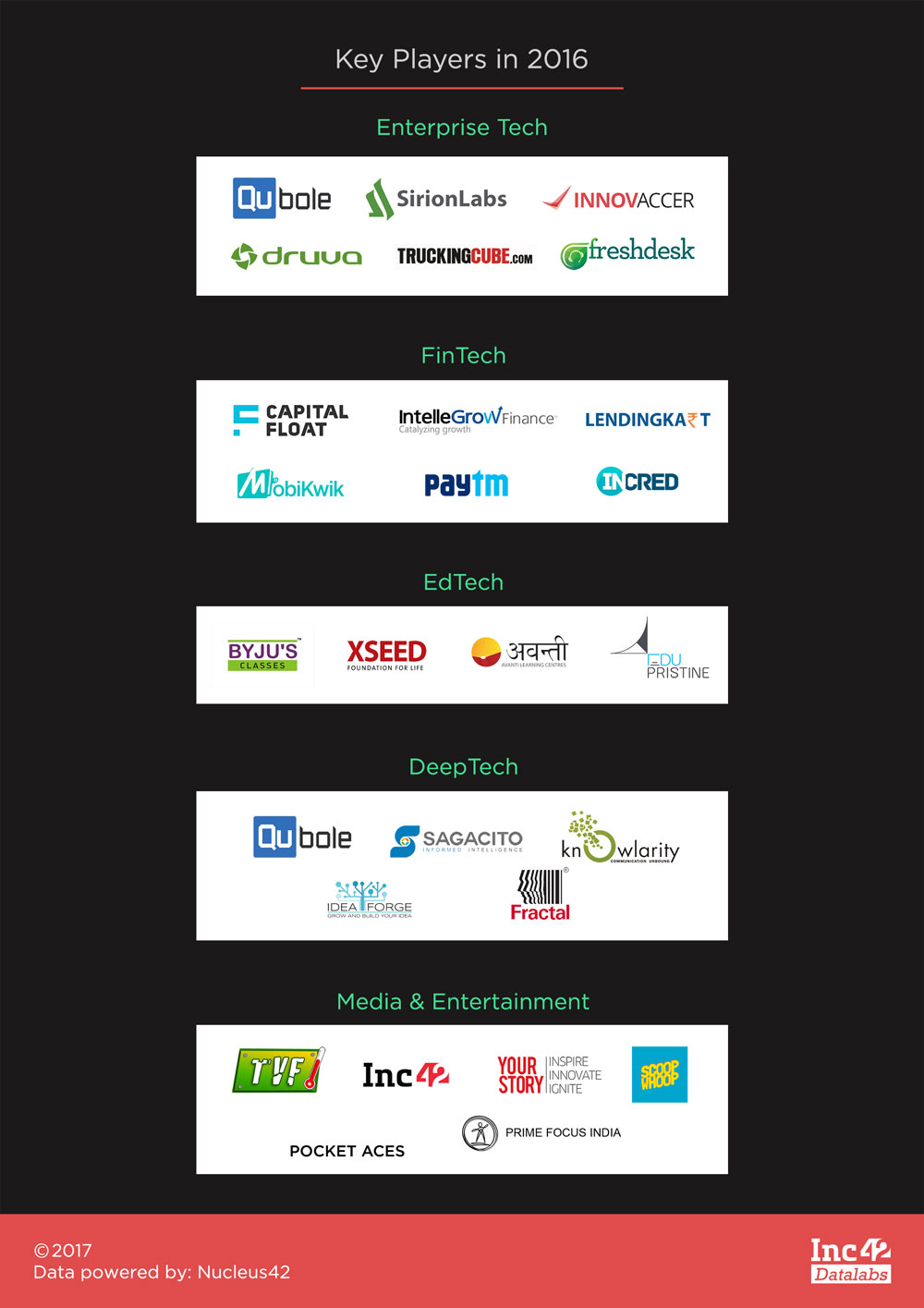 Angels To The Rescue 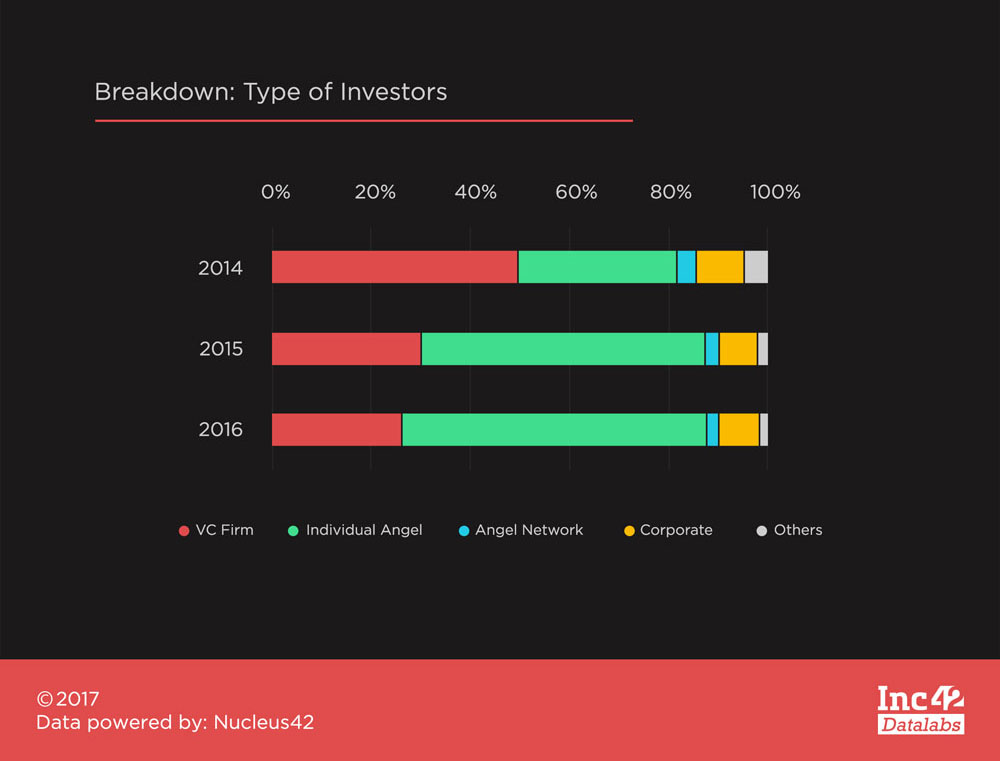 It was on Independence day 2015 that PM Modi coined a new slogan ‘Startup India, Stand Up India’ – declaring from the ramparts of the Red Fort of his government’s intention to set up a system to enable startups.

In January 2016, the government launched the Startup India Action Plan.

Salient features of the plan include steps to provide tax exemption to startups for three years and exemptions on capital gains, a compliance regime based on self-certification, legal support, and fast tracking of patent examinations at lower costs. It also entails a credit fund guarantee, support by building a startup India hub, innovation centres, and seven new research hubs, and funding support through a fund of funds with a corpus of INR 10,000 Cr.

The one event that shook India and the startup system like never before was the PM’s controversial policy decision on November 8, 2016 – wherein he demonetised INR 500 and INR 1000 notes, setting in motion an event whose impact will be felt for years to come.

While politicians and the nation are divided on the benefits of the move which the PM advocates will remove black money, give an impetus to a cashless society, and digitisation, startups, especially wallet players, have been having a field day after the move. Fintech startups such as Paytm, MobiKwik, Freecharge, all reaped in hefty dividends as far as traction is concerned. As all of India lined up at ATMs and banks for the last two months of the year, most of the startups have welcomed the move, stating it might be painful in the short term, but will be a major push towards a cashless Indian society in the long-term.

We admit it. 2016 has been rough on startups – be it the smallish size of ticket deals, course correction in various sectors or the tightening of investors’ purse strings.

It is the sign of a maturing ecosystem that the economy has been able to ride the storm of dried-up funding, the alleged burst of the startup bubble and emerge as the third-largest startup ecosystem in the world – with no signs of stopping it – right behind the US and China.

While the last 12 months have given a clearer, if slightly less-than-optimistic picture than what emerged in years before, there is no denying this fact: Indian startups have begun to claim their place at the top of the global tech food chain. With the emergence of new unicorns and rising foreign investor interest who are bullish on the economy, as a whole, 2016 was a mixed bag of hits and misses.

We, at Inc42, cannot wait to uncover what the new year will bring to emerging businesses and intrepid entrepreneurs, in terms of valuations and value – as always providing a bridge between our audience, startups, investors, and experts.