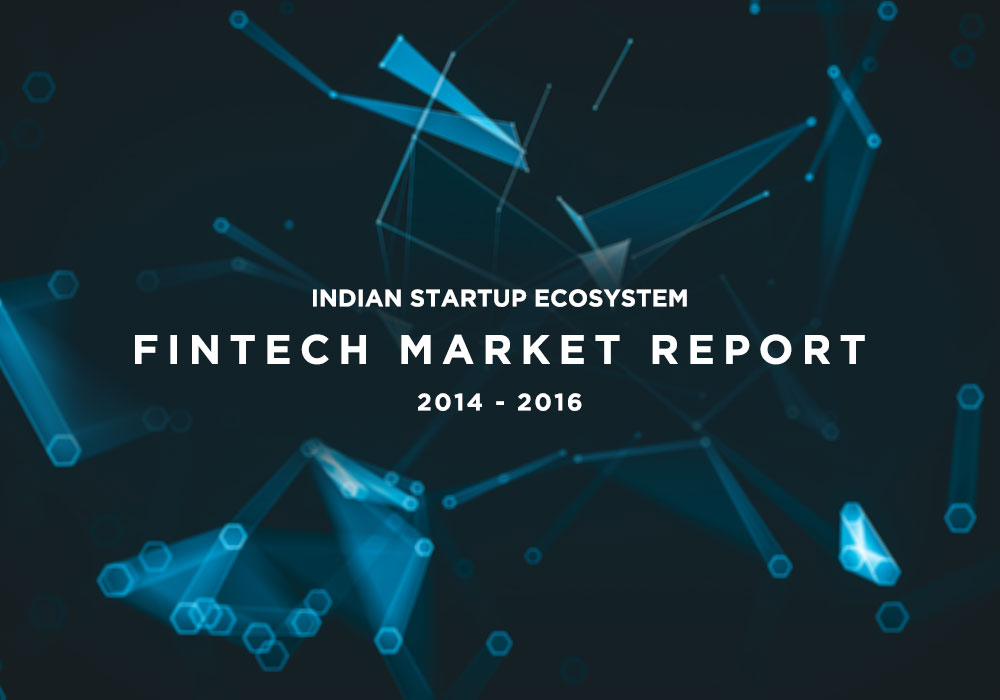 Disruption is a word used way too lightly in the world of startups today. It is hard to imagine every other company “drastically altering or destroying the structure of…” any industry. However, in the Indian landscape, a particular sector has truly redefined the established order.

The financial sector was previously run by age-old organisations working, for the most part, pretty efficiently in a defined environment. Banks provided banking and ancillary financial services. Insurance companies provided insurance. Investments were usually made through mutual fund houses or in the informal sector, and the consumers were more or less in tune with this paradigm. 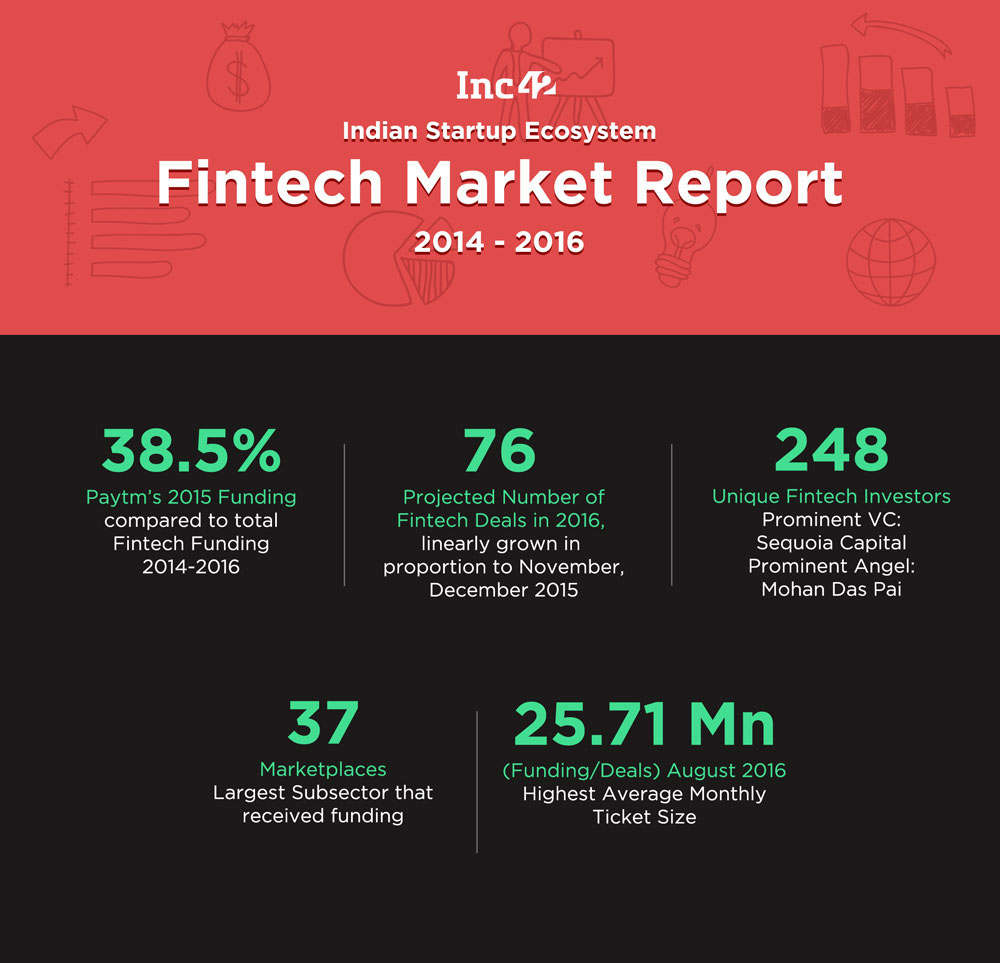 In the last few years or so, technology along with startup-vogue driven innovation has blazed a trail in how financial services are dispersed. The Indian fintech market is forecasted to touch $2.4 Bn by 2020, a two-fold increase from the market size today. Lending and payments, in particular have paved the path for this unprecedented growth.

The pre-existing players have been compelled to invest big money in duplicating similar products and redefining their existing service offerings. However, the competition has been seen as primarily positive – with collaboration between startups and larger corporations being the name of the game in 2016, and will continue to define the industry in the near term. With regulatory concerns looking less worrisome with the advent of Digital India, the fintech sector is poised to further bloom and mature, and the prospects ought to be very exciting for consumers.

Inc42 looks back at the funding numbers to help our readers understand what trends have driven the industry since 2014. This report is the first in our three-part Indian fintech funding series. 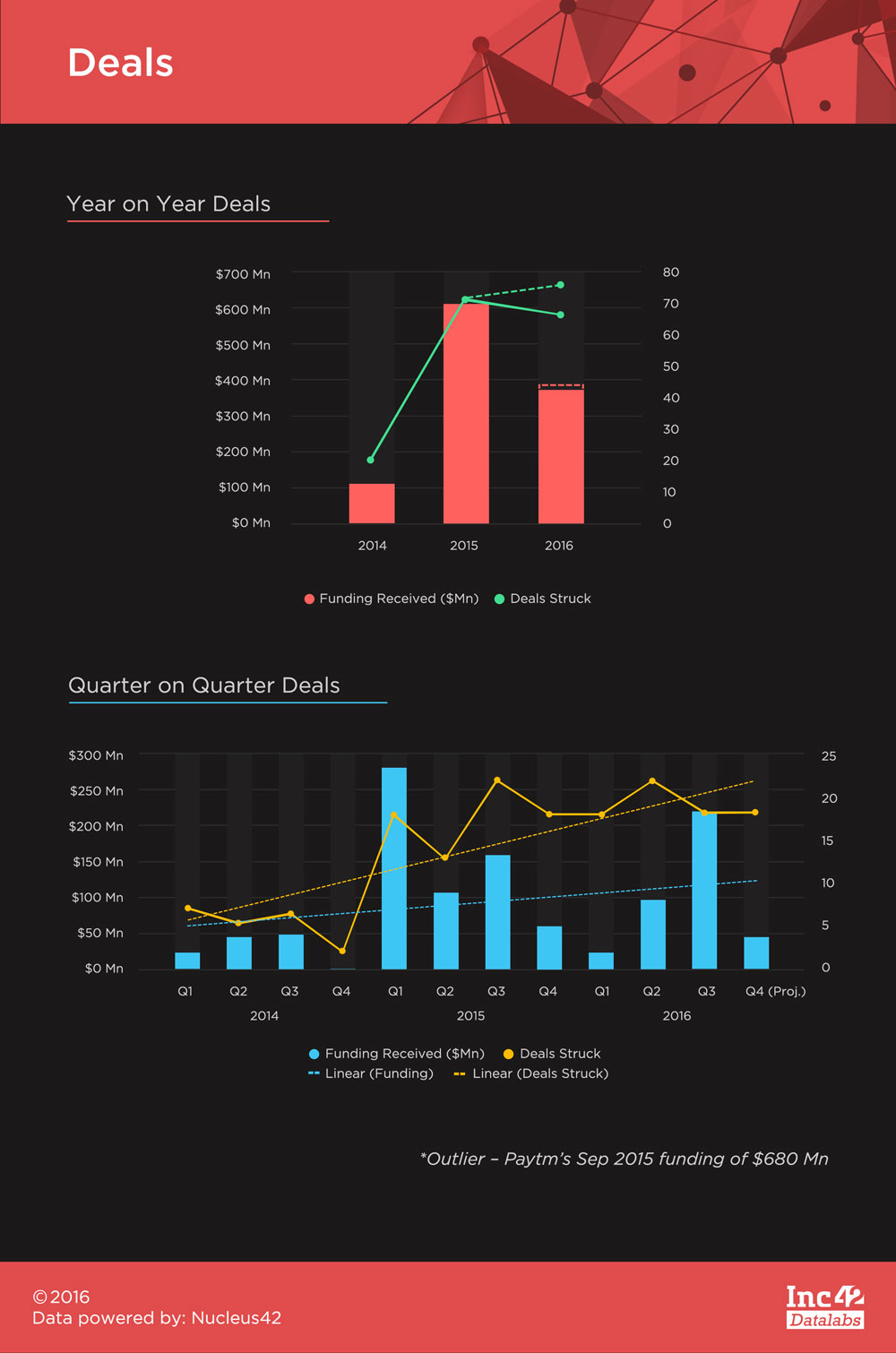 Fintech has brought in $1.77 Bn in funding in India since 2014, with Paytm’s $680 Mn funding from back in September 2015 making up 38.5% of the entire sum. This is a staggering figure, but should not come as a big surprise as it is one of the few fintech startups to have gotten mainstream with a big chunk of India’s consumer base recognising and even using it regularly.

We expect more such big ticket fundings in the future, as startups start to mature finding the right product that masses accept. For this report, however, Paytm’s funding shall be considered as an outlier and will be discounted in order to not skew trends.

Fintech funding has not been cyclical, with the first quarter of 2015 and the third quarter of 2016 raking in the most amount of funding. After picking up since Q1 2015, there have been an average of 19 fintech deals every quarter. Linear trends show deals having outpaced funding growth but we expect that to change with potential big ticket fundings to come in the future. 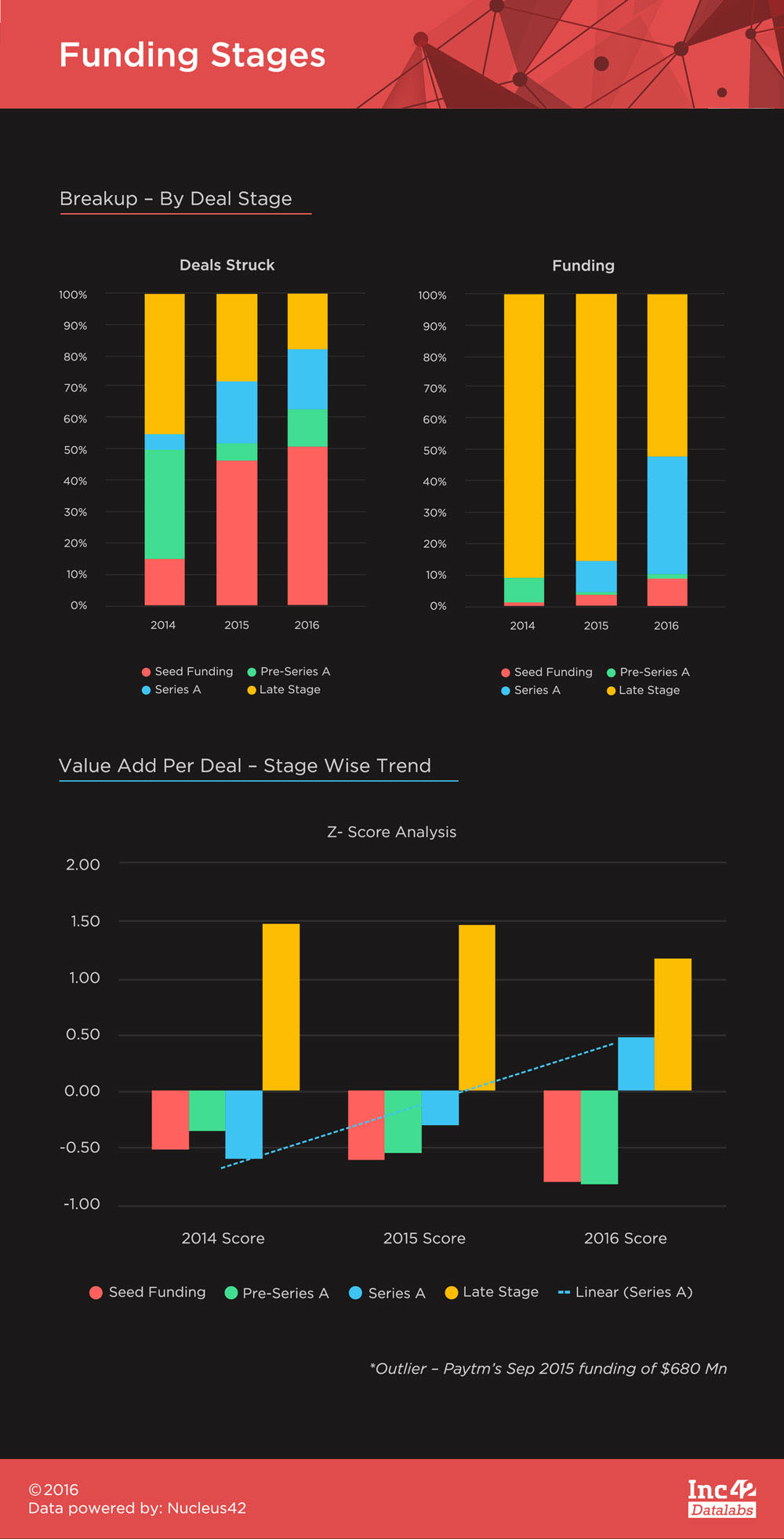 Late-stage funding has dominated numbers from the past three years but the figures are on a downtrend with both deals struck and funding amount as a percentage of their respective totals diminishing every year. Inversely, Seed stage and Series A funding have been garnering more interest through time.

However, the Z-Score trend, which shows deviations of marginal value additions (funding per stage as a percentage of total funding/deals per stage as a percentage of total deals) from the mean, shows Pre-Series A becoming more and more prominent. The inference to be drawn here is that the Fintech market in India is maturing progressively with Mid Stage funding being shown greater interest and also given more confidence with higher ticket sizes in funding terms. Investors are keenly backing ideas that have a market fit and have the potential to burst onto the centre stage. This cements Inc42’s position on the aspect of maturing fintech companies raising larger fundings in the near term future. 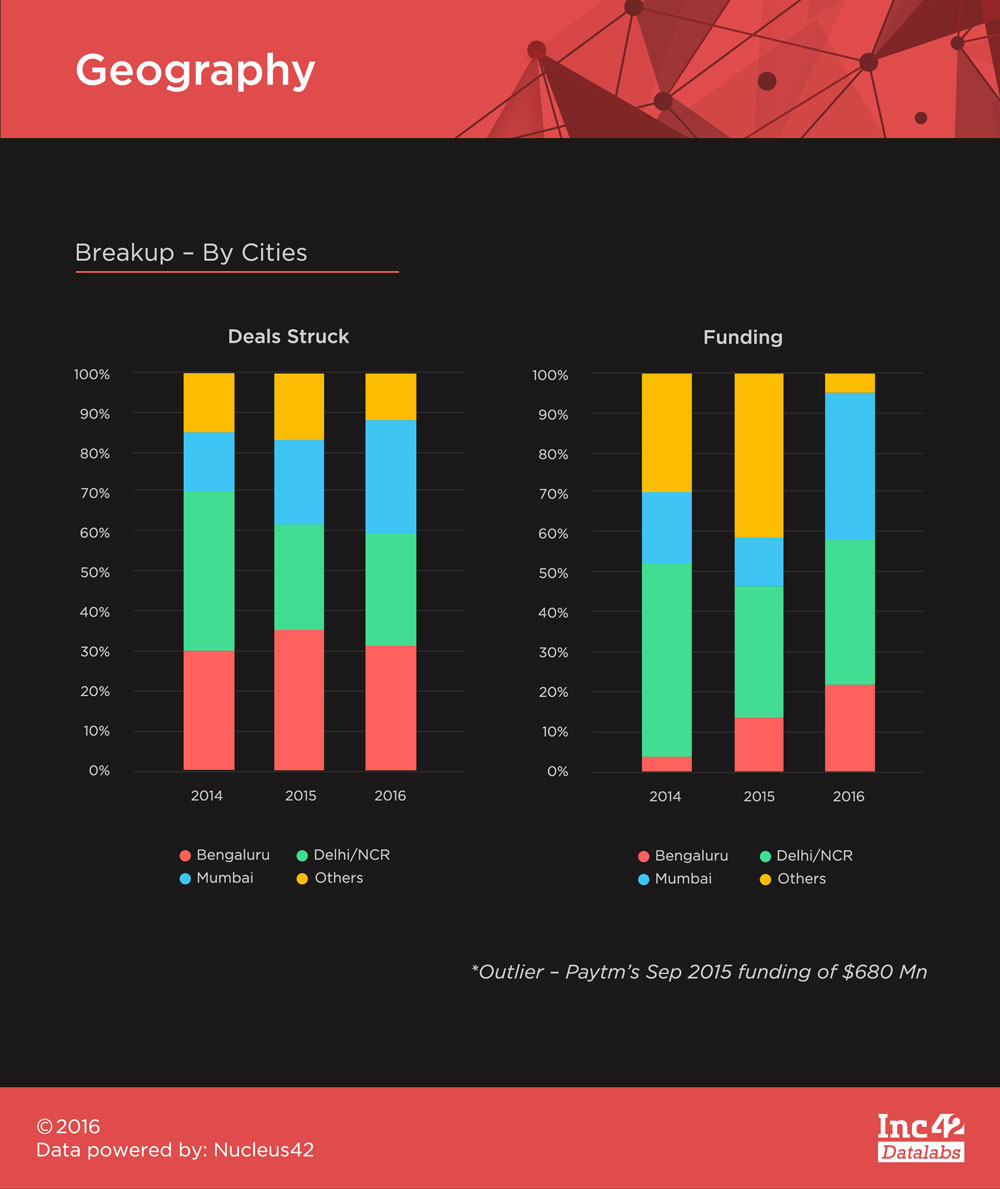 Mumbai has been the epicentre of the Indian financial landscape, and has shown resilience in relinquishing this position. With Delhi/NCR and Bengaluru dominating most other sectors in churning out startups, Mumbai had been left behind. But with 28% deal share and 37% funding share in 2016, Mumbai has held its head up high. Freecharge, Instamojo (they have now shifted base to Bengaluru though), InCred, Mswipe and Citrus Pay are some of the startups that have helped Mumbai gain this momentum. 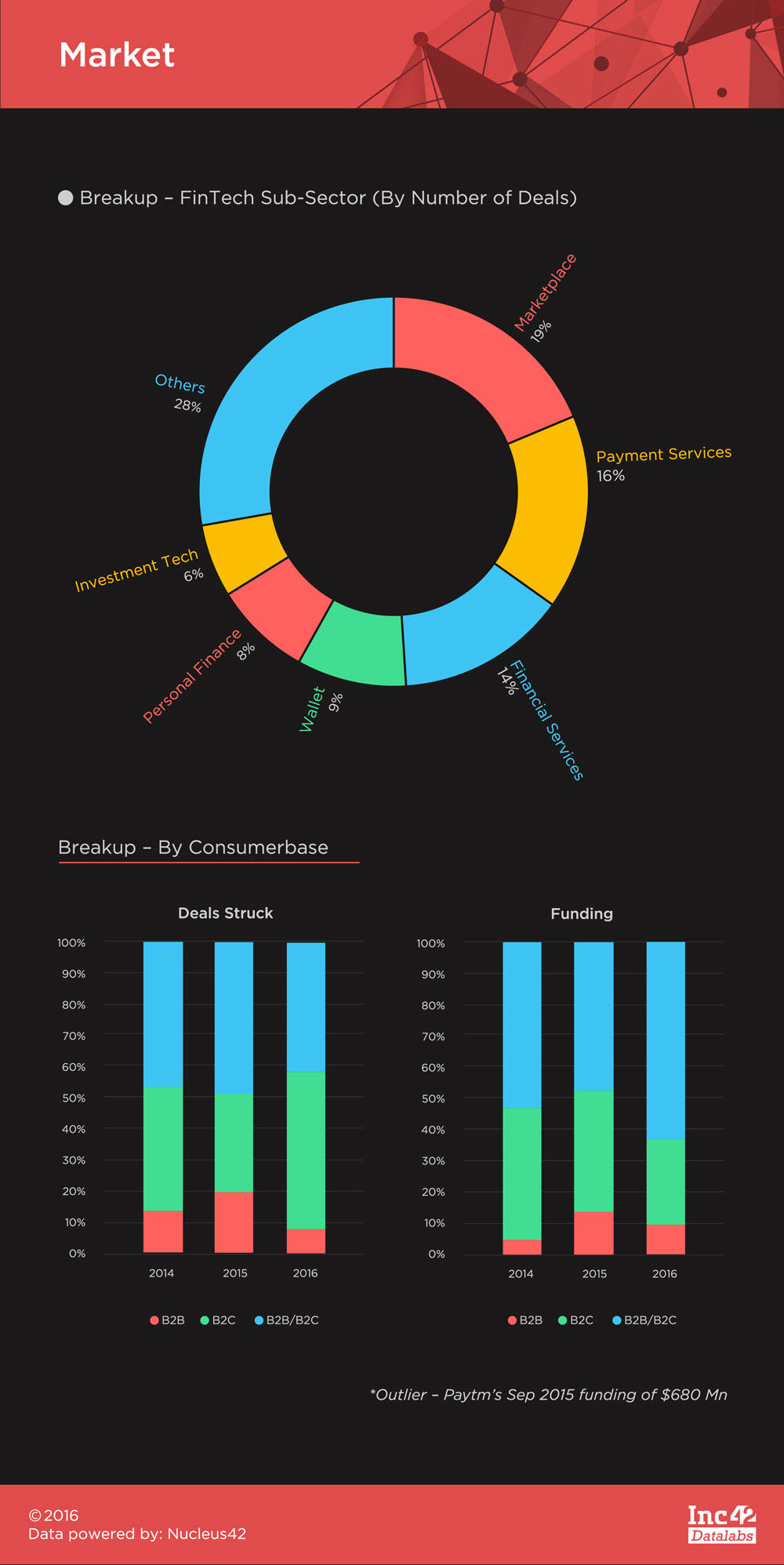 Fintech has been a market primarily focussed on consumers, and the few startups focussing on businesses (totalling 11 through almost three years) really haven’t come into their own in India yet. B2C Fintech startups can be broadly divided into asset side and liability side startups.

Asset side startups basically cater to providing investment services into varied asset classes and liability side into payments and provision of credit through various means. This is an intriguing way of classifying such startups because of how they have fared in the Indian ecosystem.

Historically, liability side startups (marketplaces, payment services, wallets, and some Financial services providers) have done exceptionally well, as can be seen in the sub-sector breakdown below. However, asset side startups have just not been able to get similar traction.

The reason behind this is that liability side startups are pull-inductive, meaning the consumer wants to use their services as an alternative and doesn’t have to be coaxed to a large extent to derive value. Whereas asset side services have to be pushed on to the consumers, firstly using investment education to get rid of their existing orthodox informal investment mindset, and secondly by differentiating their product from others just as effectively.

This has so far been an arduous task with few asset side startups like PolicyBazaar and Zerodha having come into the limelight, but not even to the extent of the multitudes of payment and lending startups like Paytm, BillDesk, FreeCharge, InCred, BankBazaar, Lendingkart and many others. 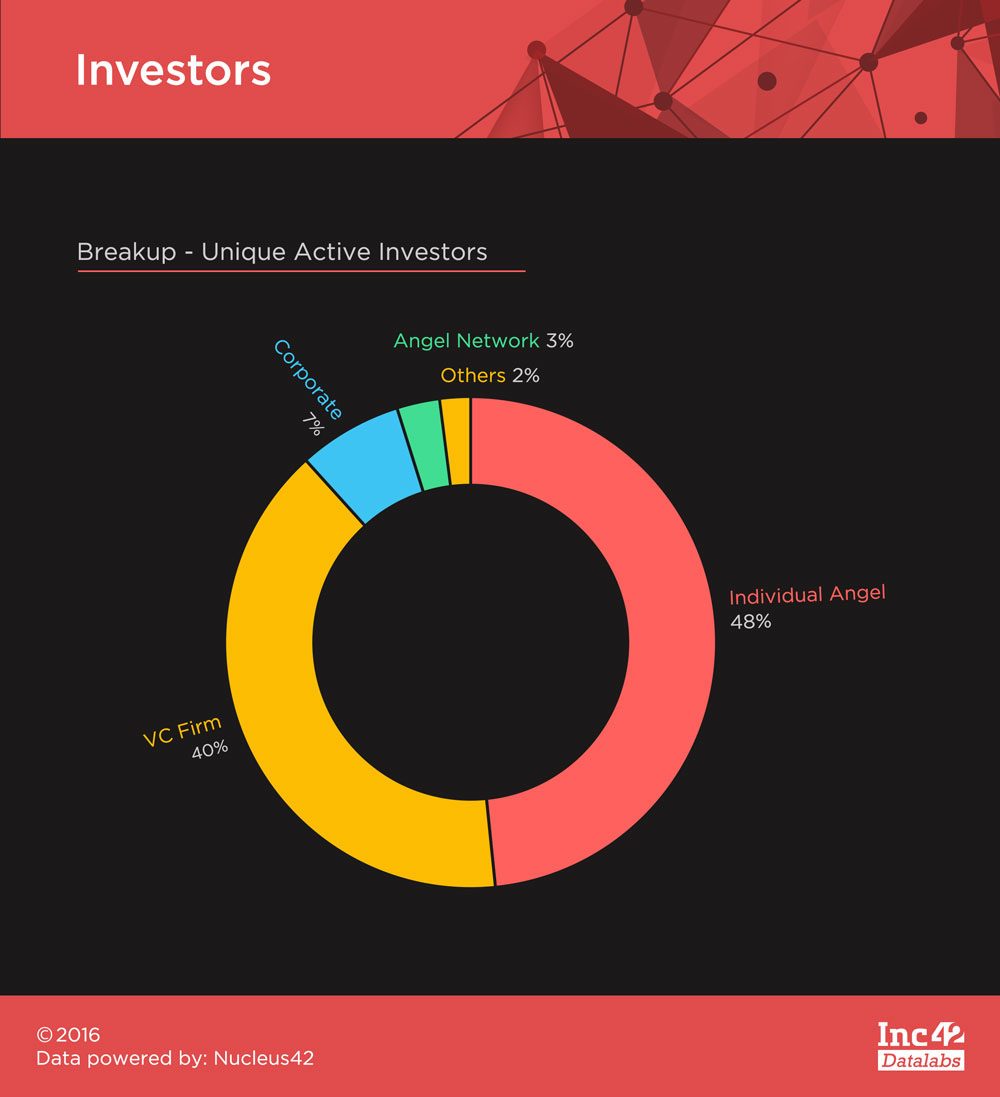 Fintech has received a lot of interest from all kinds of investors owing to the sector’s proliferation over the past few years The 248 unique active investors that this sector drew in over 2014-16, saw deal numbers running neck and neck between angel investors and VCs. Sequoia Capital and Accel Partners made the most investments among VCs whereas the most angel rounds were led by Mohandas Pai and Rajan Anandan.

Fintech has been an exciting space over the last few years, and despite the decline in funding amount this year, it has held its own. The recent demonetisation drive has only given the sector further impetus and the journey ahead looks promising.

You can read more about the sector in the next parts of our fintech funding series – fintech’s chunk of the Indian startup pie and the top 5 fintech fundings of 2014-2016.