In its latest report, DataLabs delves into the booming electric vehicle market in India to look at the opportunities, investments and challenges

India is looking to replicate the success of EVs in China, which is leagues ahead in terms of manufacturing, sales and infrastructure

Electric vehicles accounted for just 2.9% of all automobile sales for FY19 in India, so how can the industry drive adoption?

Most people don’t pay a thought to how crucial mobility and transport are, till something breaks down. An efficient automobile ecosystem that facilitates the efficient movement of people as well as goods and services, is a cornerstone of economic growth.

India’s domestic automobile industry kicked off pre-Independence in 1942 when Hindustan Motors manufactured India’s first car. Since then various companies have come and gone, however, the formal automobile industry in India only took shape five decades later, in the post-liberalisation period after 1992.

The PV Narasimha Rao government ended licence raj in many sectors and brought in FDI as a catalyst for the automobile industry. Since then, through the past four decades, strong government intervention has proved the impetus for numerous changes such as the adoption of CNG in commercial and public transport vehicles across India, emission norms, safety testing and more.

In the age of startups and technology, this push has come for clean mobility. To be clear, the Indian government has no choice but to allocate funding for electric mobility and clean energy, since it’s linked to the Paris Agreement and its clauses related to financial commitments from the World Bank and the United Nations.

But the push from the government ever since the National Electric Mobility Mission Plan of 2013 has provided unprecedented backing to the nascent electric vehicle market in India. In 2014, when the new government was voted in, it too backed the plans for EVs in a big way with the Faster Adoption and Manufacturing of Hybrid and Electric Vehicles (FAME) scheme.

The second great thing that happened for the electric mobility sector is the increase in investor confidence and the surge in capital inflow for electric vehicle-focussed startups.

Despite favourable market conditions and increased investor confidence, the infrastructure to support electric vehicles in the country still remains the biggest challenge in India, and that’s why despite the push from investors and the government, market adoption of EVs is a big hurdle.

Where India Stands Compared To China

When it comes to adoption of new-age technologies, China has always had an upper hand on India. From consumer internet products to smartphones, the adoption in China always began first and has been higher than India. As per the Cisco Global Digital Readiness Index which measures the tech readiness of a country, China’s scored in 2019 (13.22) was 40% higher than India (9.46). 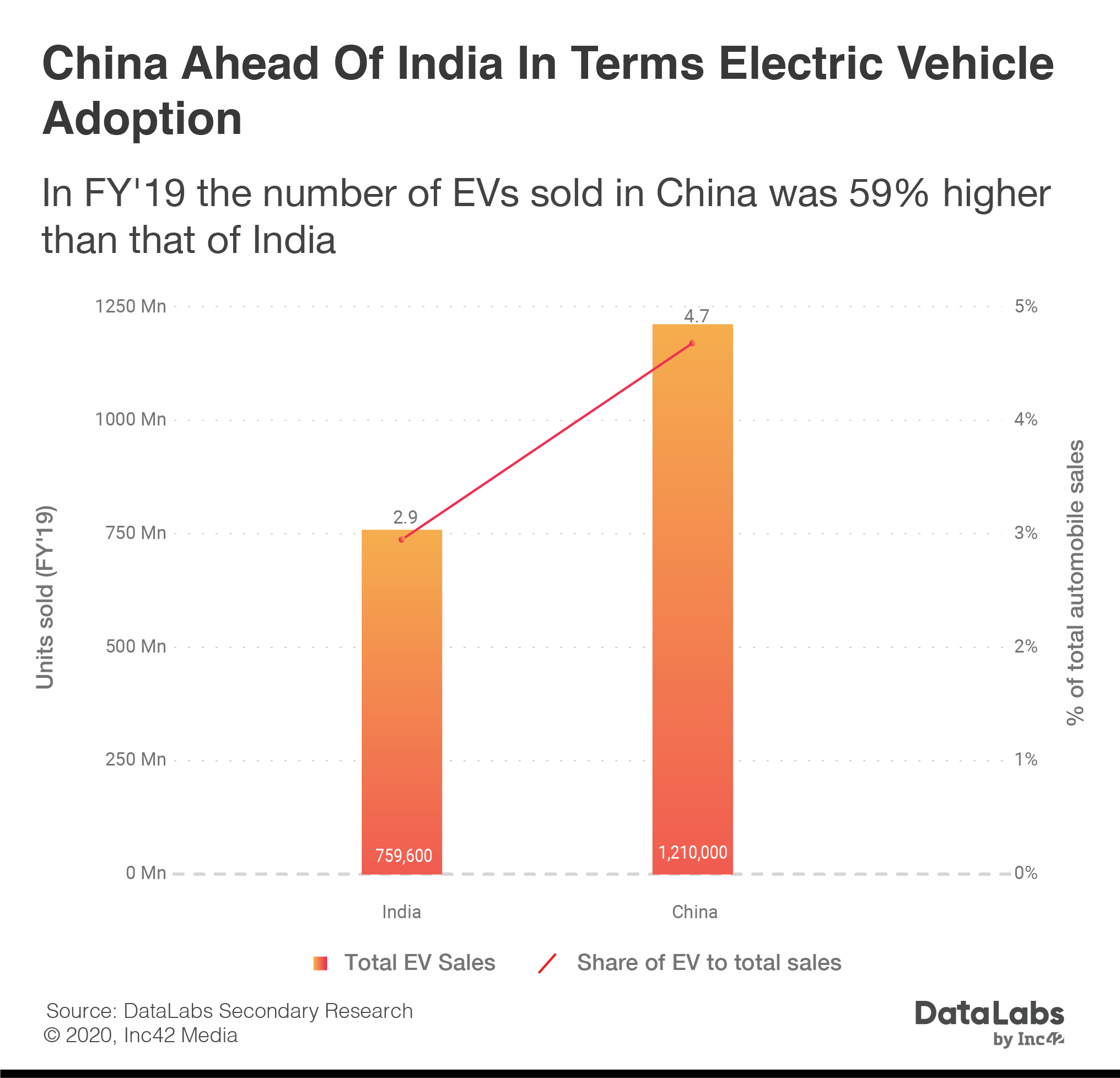 Superior tech readiness, manufacturing prowess and enabling infrastructure in China has driven the higher adoption of electric vehicles in China. Another important point to notice is that rather than being dependent on international players, the EV revolution in China is being spearheaded by domestic players. Homegrown car manufacturers like BYD ($7.38 Bn), Geely ($4.12 Bn), BAIC($4.12 Bn) and SAIC($3.36 Bn) have all made significant gains through the sale of EVs in 2018.

The Biggest Challenges For EV Ecosystem

As DataLabs by Inc42’s Electric Vehicle Market Outlook Report 2020, the two main points of debate for potential EV buyers in India are the range of the vehicle and the charging infrastructure. When it comes to infrastructure, charging penetration cannot be the prerogative of companies alone — government intervention plays a critical role as well.

So far, FAME and other policies have been focussed on manufacturing, incentives and certification, whereas charging infrastructure is a more recent concern in the government’s policies.

In its current state, the Indian market offers needs to tackle the range anxiety which is linked to the charging infrastructure.

The first thing that the market needs to solve is the consumer understanding of EVs. Whereas consumers have plenty of historic data to fall back on for internal combustion engine vehicles, EVs are a brand new proposition. To influence customer choice towards electric-powered vehicles over the traditional engines, the value proposition has to be extremely strong.

This is where most EV manufacturers by focussing only on the cost advantage in relation to fuel expenses. Instead, the focus needs to be on the range of the vehicle, availability of refuelling or recharging, how often the vehicle needs to be charged, the financing options and other aspects that have been well established in the combustion engine market through decades.

As indicated previously range anxiety is closely linked to the fear that one might not find a charging station when in need.

The state of charging infrastructure in India is such that as of 2018, India had approximately 650 charging stations compared to China’s 331K plus.

So these fears are very much valid. But the reality is that things are changing quickly. The lacking charging infrastructure for electric vehicles in the country is a major hindrance to their value proposition compared to the combustion engine vehicles. In order to achieve an EV adoption similar to China, the foremost issue which needs to be addressed is that of establishing charging stations.

After the Union Budget in February, India’s electric vehicle industry was quite disappointed with the lack of announcements and new policies for the sector. Finance minister Nirmala Sitharaman did not even mention electric vehicles in her budget speech, but soon after the central government gave an in-principle nod to firms, including NTPC, EESL and REIL to set up 2,600 EV charging stations, which would improve the situation on the ground.

Overall, India does have a very strong domestic automobile market in terms of demand, but that may not be the case for electric vehicles in Tier 2 and Tier 3 cities. As seen in the past year, metros will be a better target market for early adopters of electric vehicles thanks to the higher incidence of high net worth individuals and the higher purchasing power.

India had the 12th largest HNI population in the world as of 2018, with 263K individuals. Since electric vehicles are a lot more expensive than traditional fuel cars, this would be the primary audience for EVs. And such consumers are also likely to have better tech readiness and charging facilities.

Things are changing rapidly in the Indian market. Many Indian manufacturers announced affordable EV four-wheelers at the Auto Expo 2020, and this could very well change the face of the market in the year ahead.

However, creating the charging infrastructure and removing range anxiety from the consumer’s mind will still be the biggest hurdle.

Get a deep look at the state of the EV market, India’s mobility ambitions and how realistic the targets are in DataLabs’ Electric Vehicle Market Outlook Report 2020.