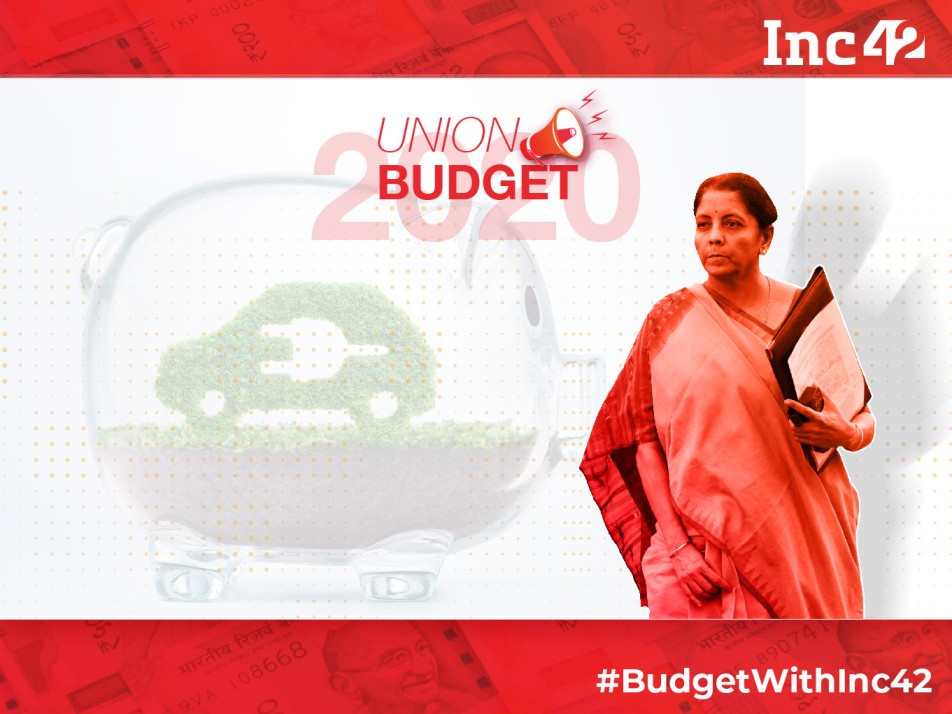 However, the Union Budget 2020 had no mention or benefits for the electric vehicle sector

When finance minister Nirmala Sitharaman inaugurated the Union Budget 2020 session in late January, and served halwa to the members of the ministry late last month, little did India know what she would serve up come February 1. Well, now we do.

Draped in yellow and with a traditional bahi khata in her hands, Sitharaman unveiled the economic reforms planned by the government in the Union Budget 2020. While this budget was focussed on themes such as agriculture, water, sanitation, education, infrastructure, new economy and more, the government missed out on many sectors.

Under the third theme where Sitharaman categorised India as a caring society, access to clean air was a major focus. She stated,

“In large cities having a population above one million, clean air is a matter of concern. The government proposes to encourage such states that are formulating and implementing plans for ensuring cleaner air in cities above one million. Parameters for the incentives would be notified by the ministry of environment, forests and climate change. Allocation for this purpose is INR 4400 Cr for 2020-21.”

The focus of Union Finance Minister on clean air stems from recent hazardous air quality levels with grave numbers from certain states like Delhi and Haryana among others. As per estimates, residents of Delhi were breathing about 25-times more toxic air (as on November 19) than the permissible limit according to the World Health Organization (WHO) guidelines.

The European Environment Agency (EEA) report ‘Electric vehicles from life cycle and circular economy perspectives’ reviews the impact of electric cars on climate change, air quality, noise, and ecosystems, compared with conventional cars. The report confirms that the greenhouse gas emissions of electric vehicles, with the current EU energy mix and over the entire vehicle life cycle, are about 17-30 % lower than the emissions of petrol and diesel cars.

No Mention Of Electric Vehicles In Sitharaman’s Budget

While the electric vehicle industry in India is at a nascent stage and has been battling various challenges, government support is the biggest crutch for the ecosystem. Unfortunately for industry participants, electric vehicles were not in the bahi khata this time around.

Unlike the budget, last year, when the GST on electric vehicles was lowered from 12% to 5% and an additional income tax deduction of INR 1.5 lakh was given on the interest paid on the loans taken to purchase EVs, this year the budget had no direct benefit for the sector.

“The key factor today hampering the growth of the industry is the lack of availability of retail finance. Incentivising banks for loans for EV consumers financing would have been a welcome step,” said Rohit Vadera, CEO, PuREnergy Private Limited.

Despite a clear correlation between the use of electric vehicles and a cleaner environment and a strong belief of the Indian government on the same idea, the Union Budget had no mention of EVs, and no incentives were announced to drive demand in EVs. There was no mention of spending to build the infrastructure needed to create EVs and keep them running.

The Modi government aims to make India a hub of electric vehicles, but the Union Budget 2020 seems to have skipped a beat.

The centre had announced a series of measures to this end including a $1.4 Bn worth manufacturing hub. India is estimated to become the fourth-largest market for EVs by 2040. But Sitharaman barely mentioned electric vehicles in the longest budget speech ever.

To woo the industry players, EVs find themselves specifically on the Union Budget 2020 speech where it is mentioned that “the customs duty rates are being revised on electric vehicles, and parts of mobiles as part of such carefully conceived Phased Manufacturing Plans.”

Maxon Lewis, cofounder, and MD of ChargeGrid, that manufactures and monitors EV charging systems told Inc42, “The Union Budget 2020 has no major announcement for EV as the traditional automotive industry at present is heavily invested in the transition to BS-VI and cannot be pushed to another disruption.”

Even the announced development is not new. The government’s PMP has been on the ground since 2017 and since March 2019, the government notified of PMPs for electric vehicles, assemblies and parts.

The Union Budget, however, did propose an increase in customs duty on the backdrop of Chinese manufacturers dumping low-quality products. A resultant effect of which would reflect in custom duty changes across EV segments, and could actually make EVs more expensive, providing the opposite effect of what EV makers have expected from the government.

Sitharaman proposed to increase basic customs duty on completely built units (CBUs) of electric vehicles to 40% from the existing 25%, while the same on the import of semi knocked-down (SKD) form of electric passenger vehicles has been doubled to 30%.

Import of electric two-wheelers, buses, and trucks in the same form will attract 25% customs duty as opposed to 15% applicable currently. Customs duty on import of electric vehicles, in a completely knocked down form, has also been increased by five percentage points to 15%.

While the move may restrict cheap imports from China into our country, it will also make the existing electric vehicles dearer. And the industry is very likely to pay the price.