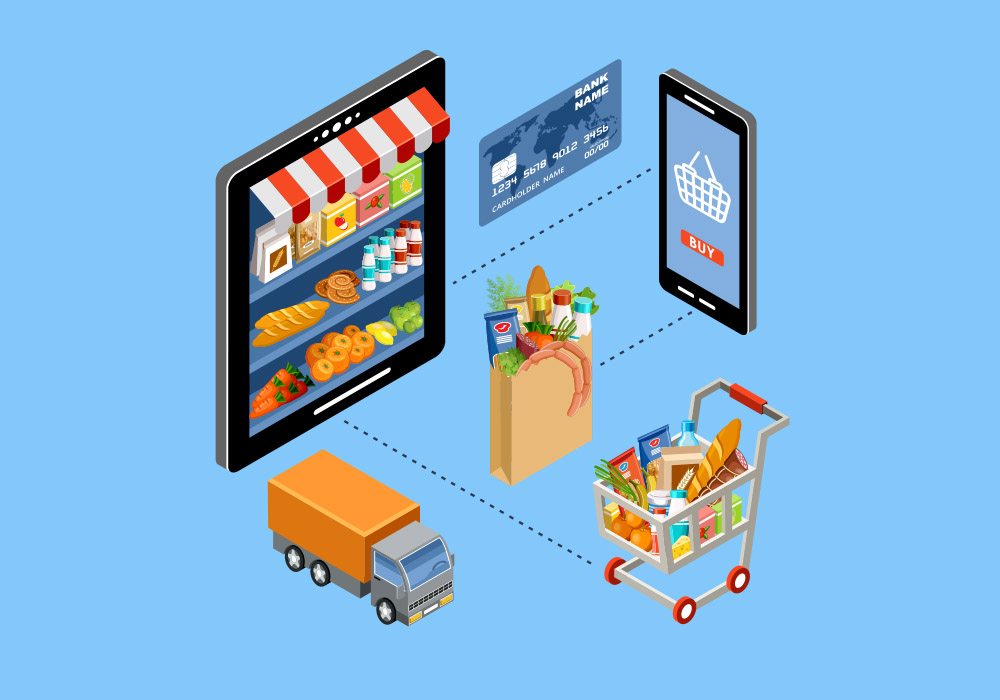 When news of Grofers shutting down its operations in 9 cities came in early January this year, the entire hyperlocal community went into a state of shock. With over $165 Mn in its kitty after being backed by marquee investors like Softbank, Sequoia and Tiger Global, the sudden slowdown for Grofers has already predicted the fate for many others in the hyperlocal grocery market.

Shadowfax, Peppertap (B2C business), Local Banya, TownRush, Paytm Zip, Ola Store, Flipkart’s Nearby – the list kept growing over the last six months, while startups revoked their operations in major cities, pivoted to B2B or get shut down. To date, out of 74 hyperlocal grocery startups, 20 shut down  operations completely, while 4 startups followed the M&A route for an exit. 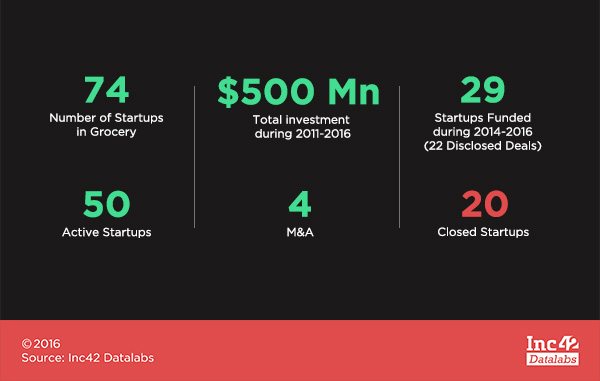 A sector which was once the apple of the investor’s eye, is now struggling to gather its bits to survive. So, what happened? Was it the lack of innovation or the sector itself is challenging? Have the investors lost their appetite for online grocery business in India? The questions are many, but there are answers only to a few. 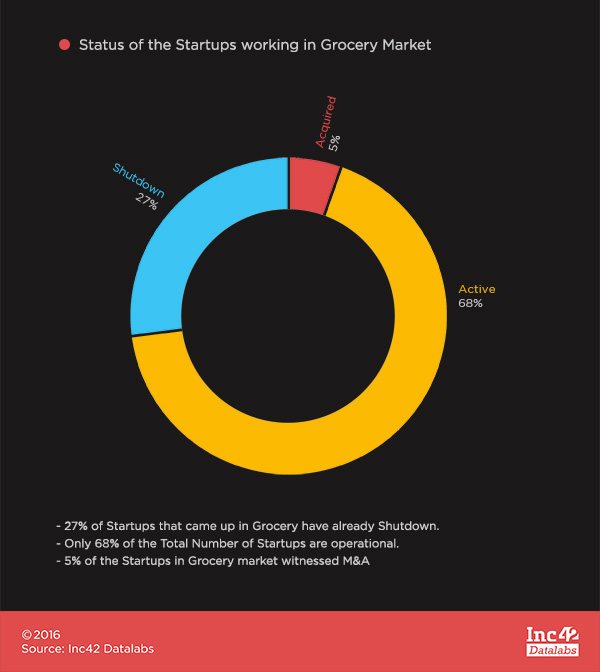 Let’s have a look at the existing business models in this space, the funding scenario and industry veterans’ take on the existing faults and upcoming future of this space in India.

According to Dr. Aniruddha Malpani, Director at Solidarity Investment Advisors, with both husband and wife working becoming more common and adding to urbanisation and nuclear families, people will be more willing to pay for the convenience of ordering groceries online. This obviously was the main idea for a majority of the entrepreneurs to enter this space.

However, grocery is a low-margin business where every penny counts and this market is still dominated by well-established offline vendors who are innovating by taking orders on the phone, giving credit and free home deliveries while building personal relationships at the same time. “This is why this is a challenging market, but there’s a lot of potential because of the huge demand. Upmarket brands have a lot of scope because the local store doesn’t stock them,” he added.

According to Ajeet Khurana, Advisor at Kalaari Capital who has invested in RainCan, a subscription-based delivery startup, one of the reasons for the current pathetic state of this industry is that some players tried to treat this as any other ecommerce category and caused customer inconvenience, others tried the hyperlocal approach and that cannot produce acceptable economics.

On the other hand, Shameel Abdulla – the founder of Jiffstore (acquired by Peppertap in December 2015) – believes that many startups threw themselves eagerly to solve existing problems in grocery purchase, but they failed to innovate and evolve.

He also believes that the focus was more on getting funding, without which it was difficult to sustain in the segment. But when they did receive funding, startups spent it on scaling up rather than innovating to get the model right or bring in a better business model.

Is There A Sustainable Business Model For Online Groceries?

The online grocery space in India has been divided into two major formats i.e.  aggregation and inventory based. Where a majority of the players are working on the former model (43 out of 74), only the startups following the latter (31 out of 74) were seen to be more sustainable. 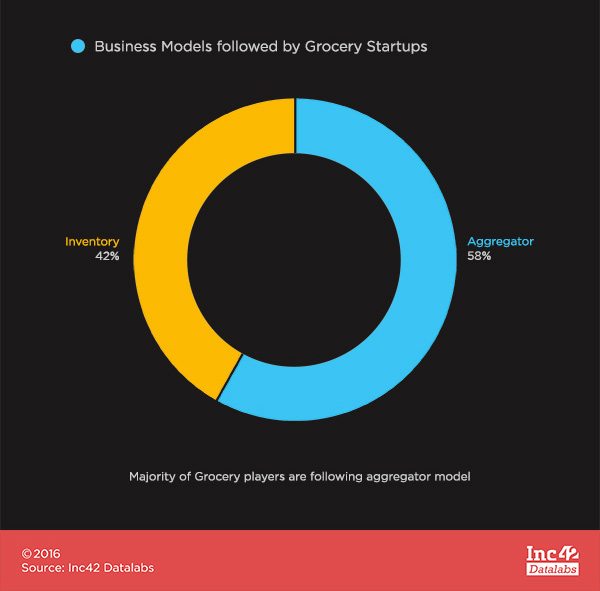 Chandigarh-based SabKuchFresh, acquired in June this year by Jugnoo, was the only acquisition to  be credited to the inventory model, while there were three shutdowns viz. VeggyKart, Hexkart and Picklet.in. Of the 27 startups which are still active,  only BigBasket has been able to touch Series D, while around 10 others have either raised Seed or series A funding. The rest are still struggling with both scale and funding.

Of those using the aggregation model, three were acquired, 17 were shutdown, and 13 are still active. Of the 13 active startups, only eight have raised funds to date. More interestingly, most of those who are active and following the aggregation model, are either running losses (e.g. Grofers clocking $40K loss per day) or have pivoted to B2B from B2C business model (PepperTap and Lazylad). Before pivoting to B2B, Peppertap was delivering over 20K orders a day and had raised close to $50 Mn while in the on-demand delivery space. Similar stories of Lazylad and Runnr are already well-known in the startup community. 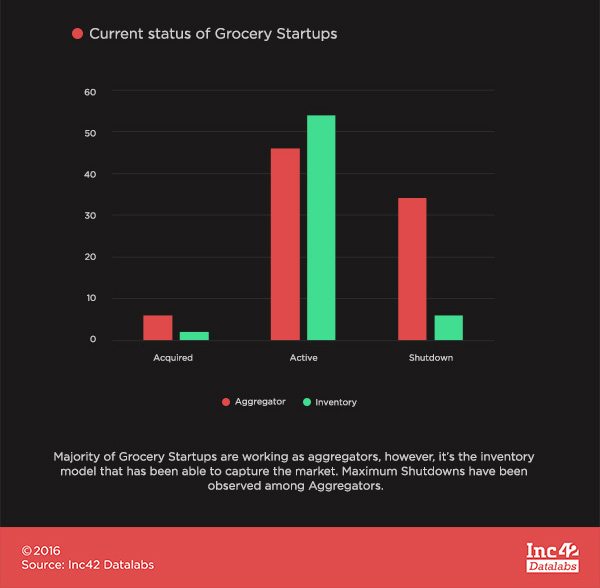 So, is grocery the game of only those who could scale and run on an inventory model? Is the B2C model falling apart in the hyperlocal aggregator space?

There are startups like MilkBasket, DailyNinja, RainCan, etc., who are utilising the hybrid inventory model along with micro-delivery service to maximise product margins while controlling costs. This is also helping them attain positive unit economics in considerably less time than other models.

The customers are not going to go away, which means this business will be around for a long time.

With regard to the B2C model, Shameel Abdulla believes that the grocery segment still needs  to crack the unit economics in this space with the right business model, as nobody has been able to get the execution right till now.

This is both bad news for existing startups who are bleeding cash and good news, because there is still a huge opportunity for a smart founder to succeed, according to Dr Malpani. “The customers are not going to go away, which means this business will be around for a long time,” he adds.

“We will have to wait to reach that conclusion. Grocery in B2C is a very big play and totally a money game. But the way Grofers has executed till now is brilliant, the right time to raise money (prepare a war chest), right move to shut operations in non profit areas, shifting to a hybrid model etc. So its still early to speak whether the B2C model has failed,” says Saurabh Singla of Lazylad.

Innovation And Differentiation – Missing Links In The Chain

From an outsider’s perspective, grocery is an obvious business option and has birthed a flurry of startups. It’s an easy model to copy and paste because the founder can source groceries easily from the open market. However, these startups have failed because they failed to provide customised grocery delivery according to customer needs.

According to Vikram Upadhyaya, Chief Mentor & Accelerator Evangelist at GHV (investor in Lazylad), so far the innovation was done mostly around how to improve the GMV to raise next round, thereby missing transformation at supply chain level, product experience level, or RoI improvement for the sellers.

The customer wants instant gratification, one-click ordering with no fuss, and flawless and timely delivery. Trying to acquire customers by giving discounts is suicidal and has created a race to the bottom amongst startups.

“I think the problem is that most startups in this space blindly copied the shopping cart model of Instacart. In the US, the customer is ready to fork out a delivery fee of more than $5 per delivery, while the Indian customer gets free delivery from the kirana (grocery) store and will not pay for this service,” said Dr Malpani.

Then, how could grocery players differentiate their product to survive in this tough condition?

According to Shameel Abdulla, basic customer expectations of the average grocery shopper such as  right products, on time, predictable service and good quality have to be met with a scalable and sustainable model, along with smart use of technology and supply chain management.

Dr Malpani also suggested that the shopping cart needs to be adapted to the fact that grocery needs are daily, recurring needs; and the margins on the business are low because these are commodity products.

“Startups need to start small in a given area; tweak their model until it works and then try to scale up. Trying to create a pan-India presence without ironing out logistical problems will just create a lot of customer unhappiness,” he added. 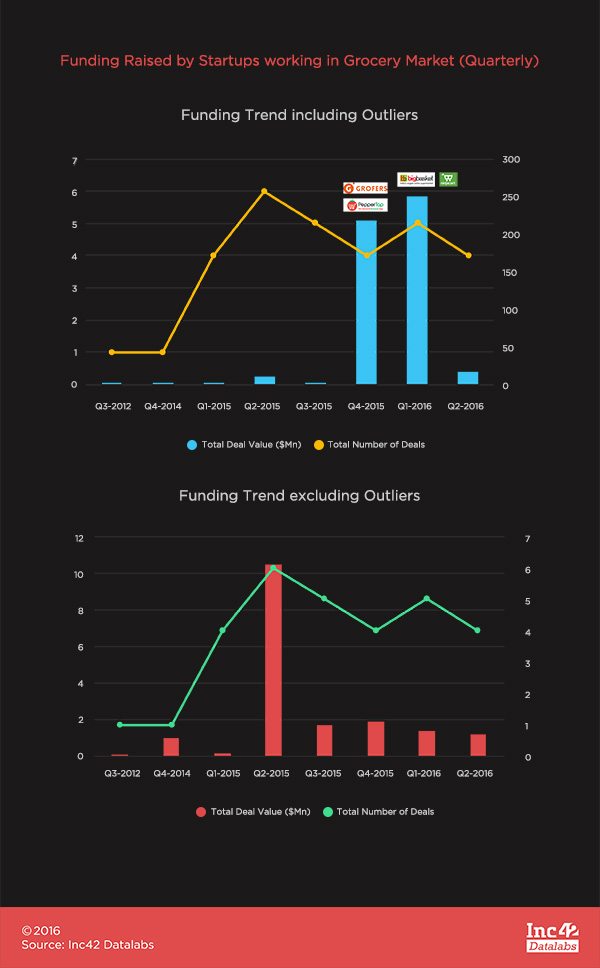 Also, there has been a shift of investor interest from aggregator-based models to inventory-led models. While in the second half of 2015, Grofers and Peppertap raised the highest funding, in the first half of current year, it was BigBasket that led the crowd. 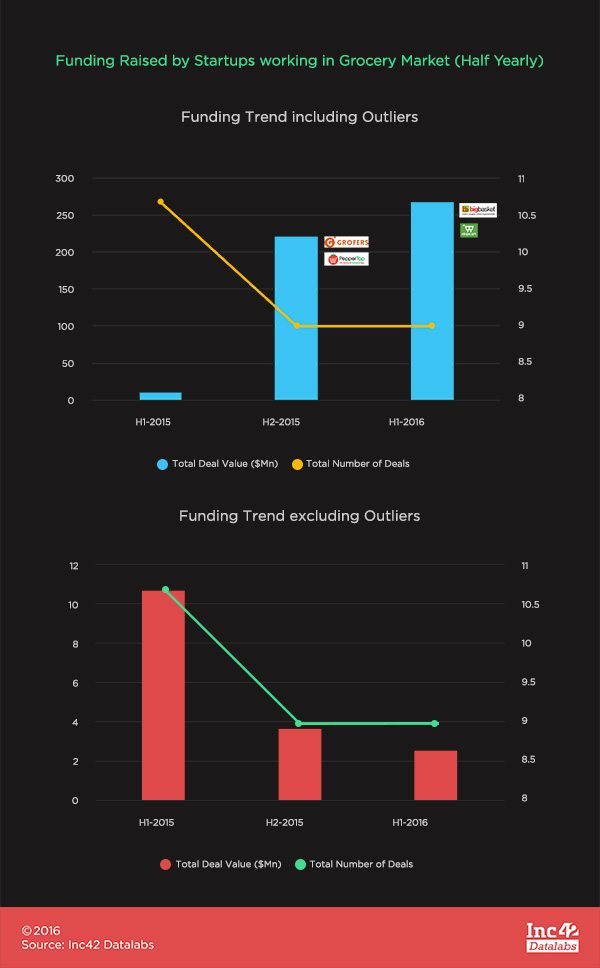 Of the total 74 startups in grocery, 73% are early stage startups. Of these, only 27% were able to survive the early stage and able to raise Series A or Series B funding. 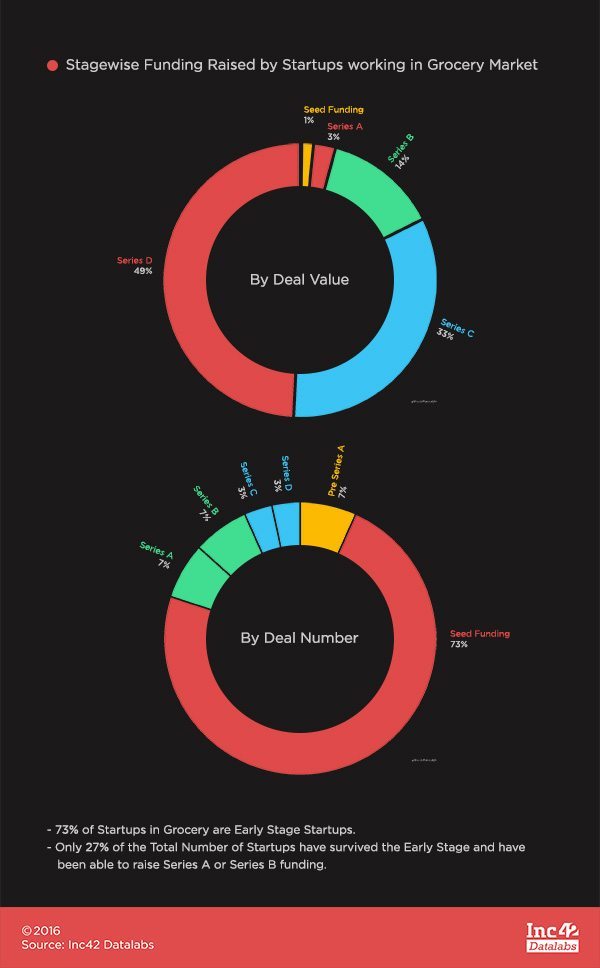 As interpreted from the above analysis, the investment in hyperlocal grocery space is deteriorating continuously. So, can we say that the market is still investor friendly?

Samar Singla, founder at Jugnoo, believes that investors are actually looking for solid and proven business models. This is certainly good for serious companies who are ready to get their heads down and grind out efficient solutions to hyperlocal problems. In May last year, Jugnoo forayed into hyperlocal grocery delivery with ‘Fatafat’ (quicker). However, it revoked its services soon and again relaunched in June.

Vikram, however, has a different opinion. He says, “As investors have lost too much in this space, they can’t put more till correct unit economics is achieved, with loyal customers and without discounts.”

Saurabh aptly believes that, “The funding scene as a whole has gone down. We are speaking of grocery too much because last year there was too much investment in one space and market. It’s the matter of getting to a product-market fit actually. Once we have something substantial as in models are concerned funding will be available is what I believe.”

Future Of Hyperlocal Grocery in India

According to a Technopak research report, the overall grocery industry in India is worth $383 Bn and is expected to touch $1 Tn by 2020. The online grocery segment which is currently pegged at less than $100 Mn, is further expected to cross $20 Bn by 2020.

The market is currently at a nascent stage witnessing more exits than growth charts. Also, there exists high pessimism among investors in the segment. However, a few failed attempts should not come in the way of the existing need in the market. And as Shameel says, this sentiment will only change if someone can show that a sustainable model can be achieved with credible traction.

We certainly need innovation from grocery etailers - one way of doing that would be to encourage consumers to alter their consumption patterns.

Ajeet is of the view that despite the huge size of the offline grocery market, its special characteristics are such that it doesn’t lend itself to conventional ecommerce logistics models. He thus believes that we certainly need innovation from grocery etailers – one way of doing that would be to encourage consumers to alter their consumption patterns. And that kind of social engineering is a hugely complex and expensive exercise.

Samar further adds that there exists a lot of potential in hyperlocal grocery delivery as it is a perennial business. “Grocery delivery is a complex and execution-oriented business, where understanding the execution and supply chain makes the real difference. Moreover, the supply chain in India poses unique challenges and hence only the companies who can crack these using their deep understanding and technology platforms will survive,” he concludes.

With more than $20 Bn riding in the balance, and a host of startups pivoting and changing direction, the secret sauce for cracking the online grocery space does exist. It just requires out-of-the-box thinking, managing expectations of investors while figuring out the right product-market fit for someone, somewhere to get it right. BigBasket, Jugnoo, Zopnow, Grofers, are you listening?