Singapore leads the pack of most favoured locations for Indian startups to expand followed by Indonesia, Malaysia and the Philippines.

Over 35+ big-ticket Indian startups have expanded or have plans to expand to Southeast Asia. Here’s why

For centuries, the Southeast Asia region and India have had close connections with India. Linked culturally and geographically, the Indian influence in Southeast Asia can be traced back to around 200 BC.

India, through several millennia, has been a source of inspiration for art and architecture in Southeast Asia today. And now, in the age of startups, it is just not culture but also technology that is crossing over from India to SE Asia. This wave has inspired more and more startups to enter these new markets.

Analysis by DataLabs By Inc42 shows that over 35 big-ticket Indian startups have expanded or have vigorous plans to expand their operations to high growth Southeast Asian markets such as Singapore, Indonesia, Philippines, Thailand and Vietnam.

Singapore leads the pack of most-favoured locations for Indian startups to expand followed by other countries such as Indonesia, Malaysia and Philippines. Up to 34.29% of the studied companies are already exploring the potential of Singapore and are currently present in the country.

After thriving at home, Indian startups are getting their first taste of the Southeast Asian market. As seen in the analysis, 45% of the companies have vigorous plans to expand in Southeast Asia in the near future and why not, when the average purchasing power of Southeast Asian countries in terms of GNI per capita is 5 times higher than India. 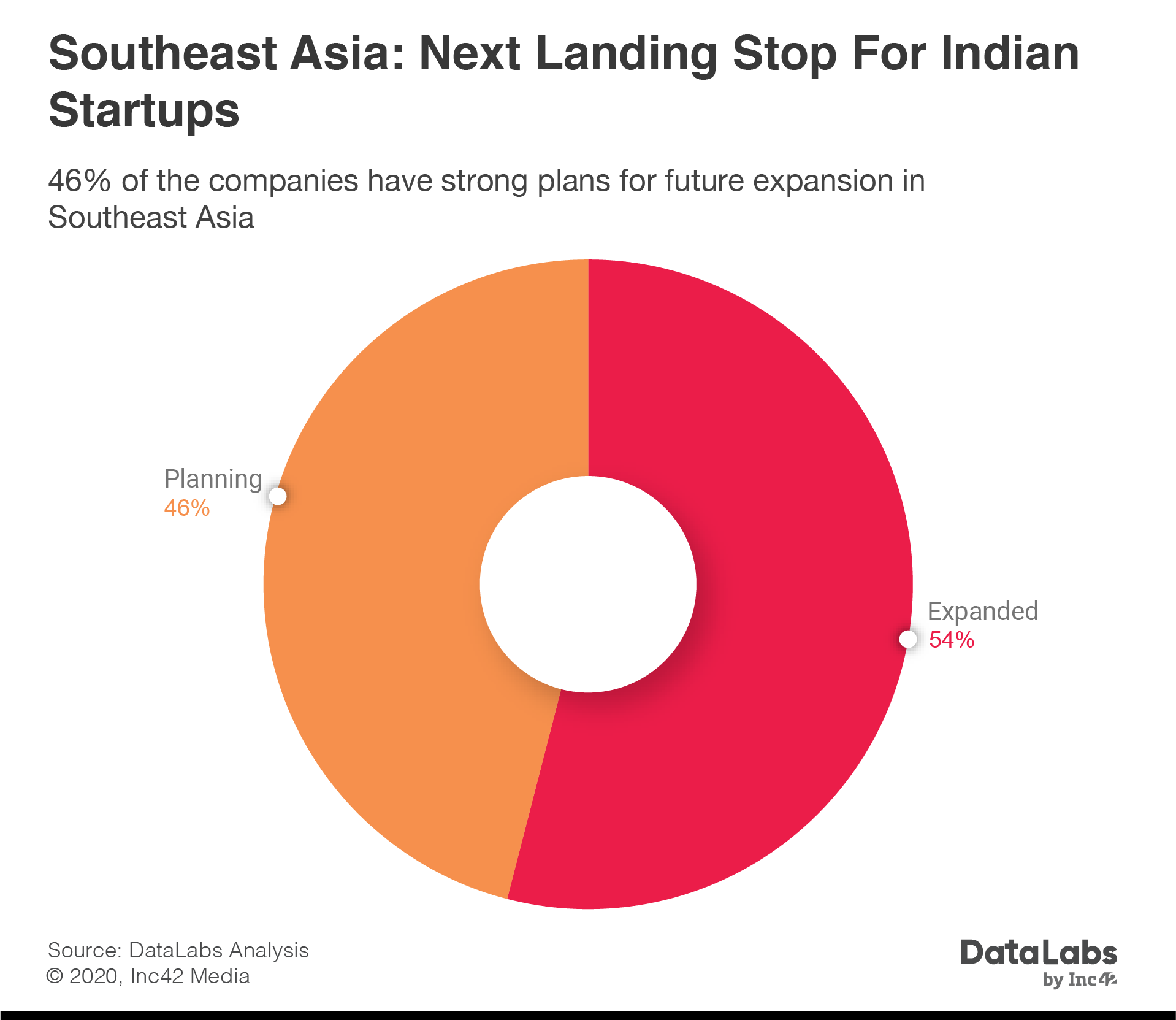 Is Southeast Asia A Safe Bet For Big Players?

As seen in the trend, 36% of firms who have expanded or are planning to expand are startups with more than $100 million in funding.

Companies are leaving no stone unturned even if it takes going the extra miles in terms of changing the company’s name to make it more globally acceptable. In January 2020, UrbanClap, a home services startup, renamed itself as Urban Company for making it easier for it to enter overseas markets.

It is easier for technology companies to expand globally with universal products. Consumer services, enterprise tech and fintech have emerged as the top three sectors where Indian startups are expanding or are planning to expand their operations to Southeast Asia. There are no specific trends in terms of expansion of startups specific to a business model — there’s an equal number of startups that serve enterprises i.e. B2B and customers i.e. B2C 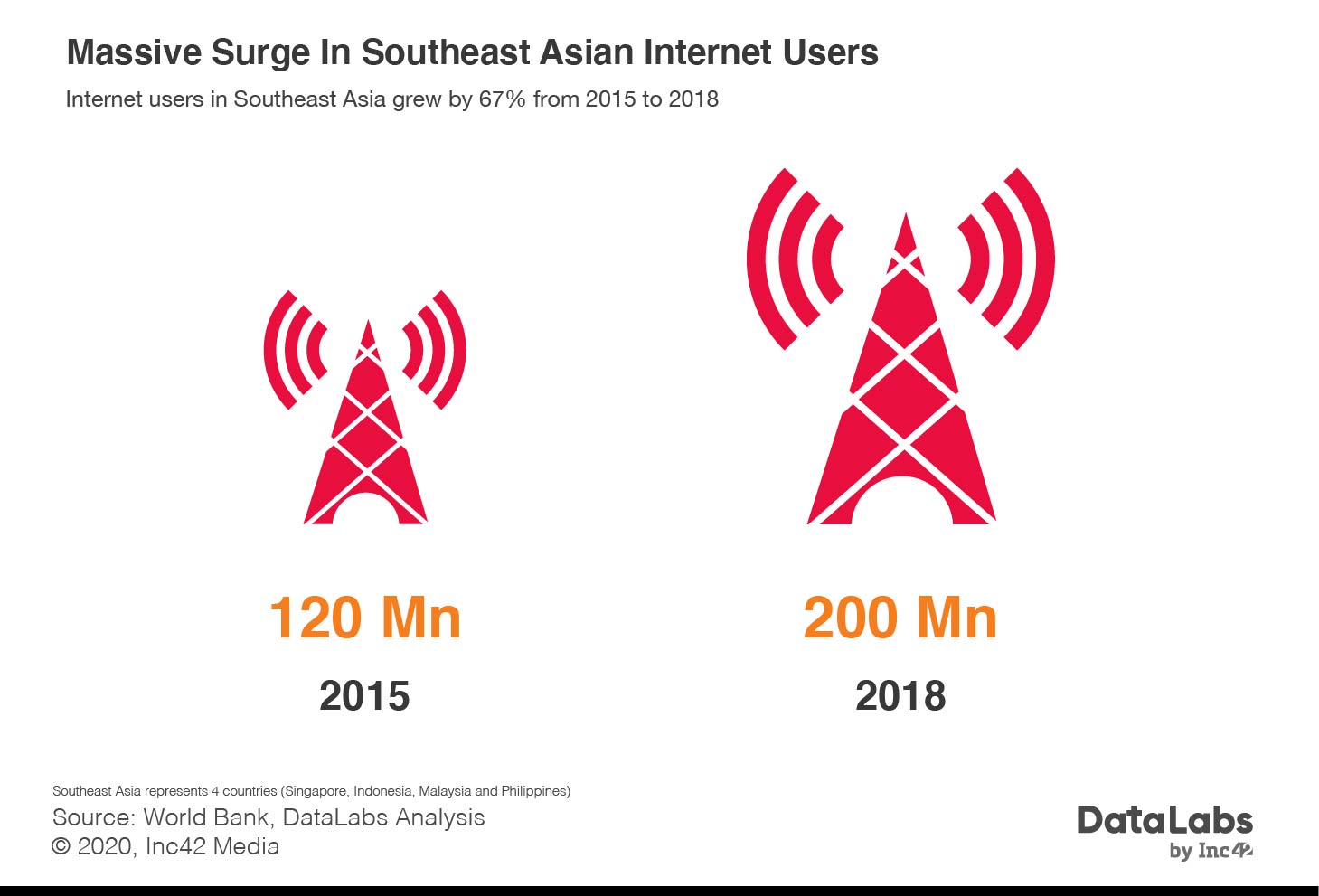 Going Strong Through The Digital Way

The bright future of these countries is clearly reflected in the rapid adoption of digital transformation tools and services.

According to Cisco’s Annual Digital Readiness Index, which examines seven components — including ease of doing business, human capital, startup environment, technology adoption and technology infrastructure — Singapore, with rank 1, emerged as the most digital ready country and Indonesia ranked 38th out of the 140 studied economies.

Also, these favoured Southeast Asian countries have internet penetration more than 40% with Singapore and Malaysia topping the list with 88% and 81% internet users of the total population respectively.

Indonesia, Malaysia and Philippines are among the top 10 most engaged countries on mobile internet globally as per e-Conomy SEA 2019 report. 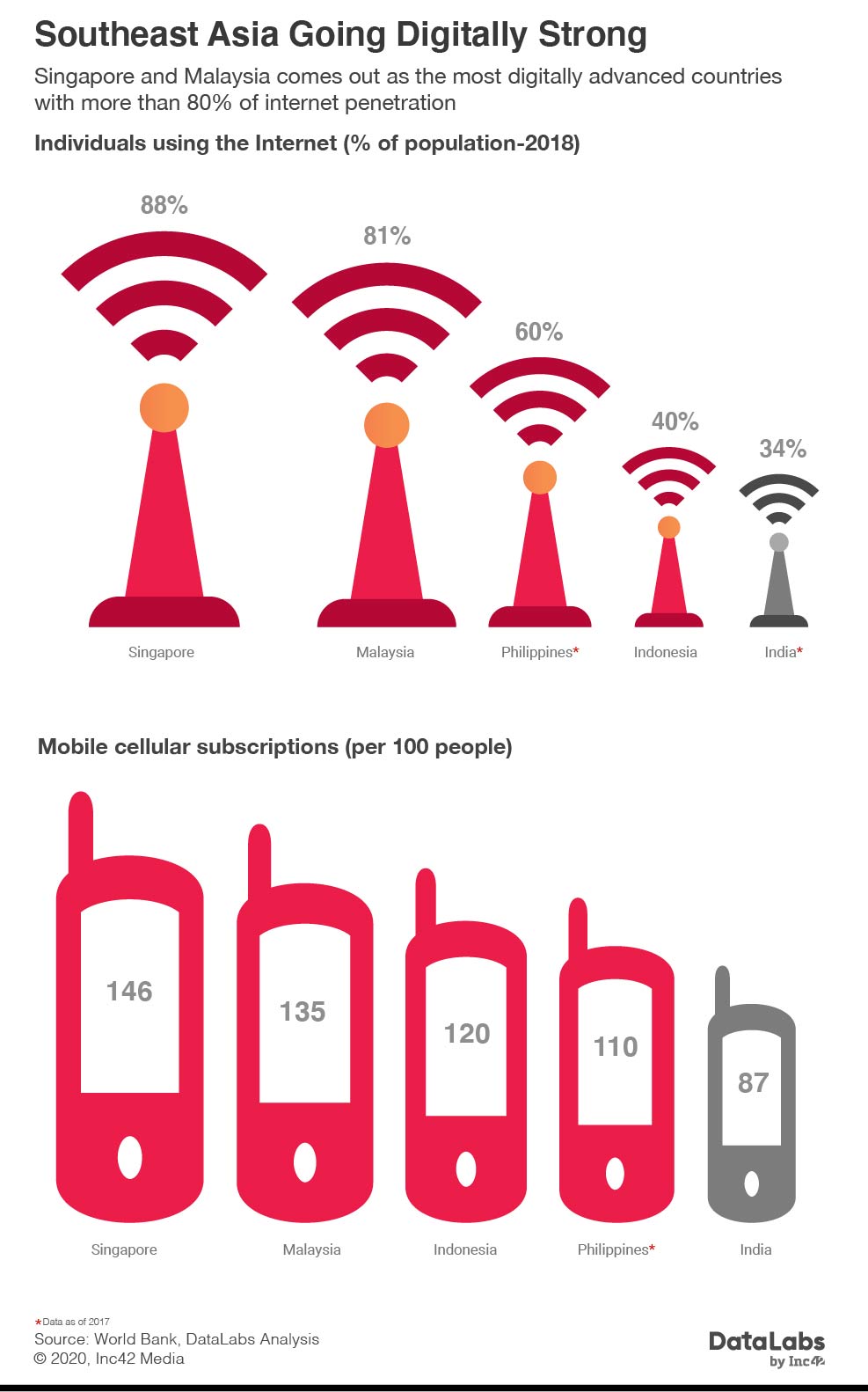 Hungry For More: Opportunities Beyond India

There is ample opportunity for startups to serve these countries with the average purchasing power increased by more than 5% CAGR during 2016-2018. 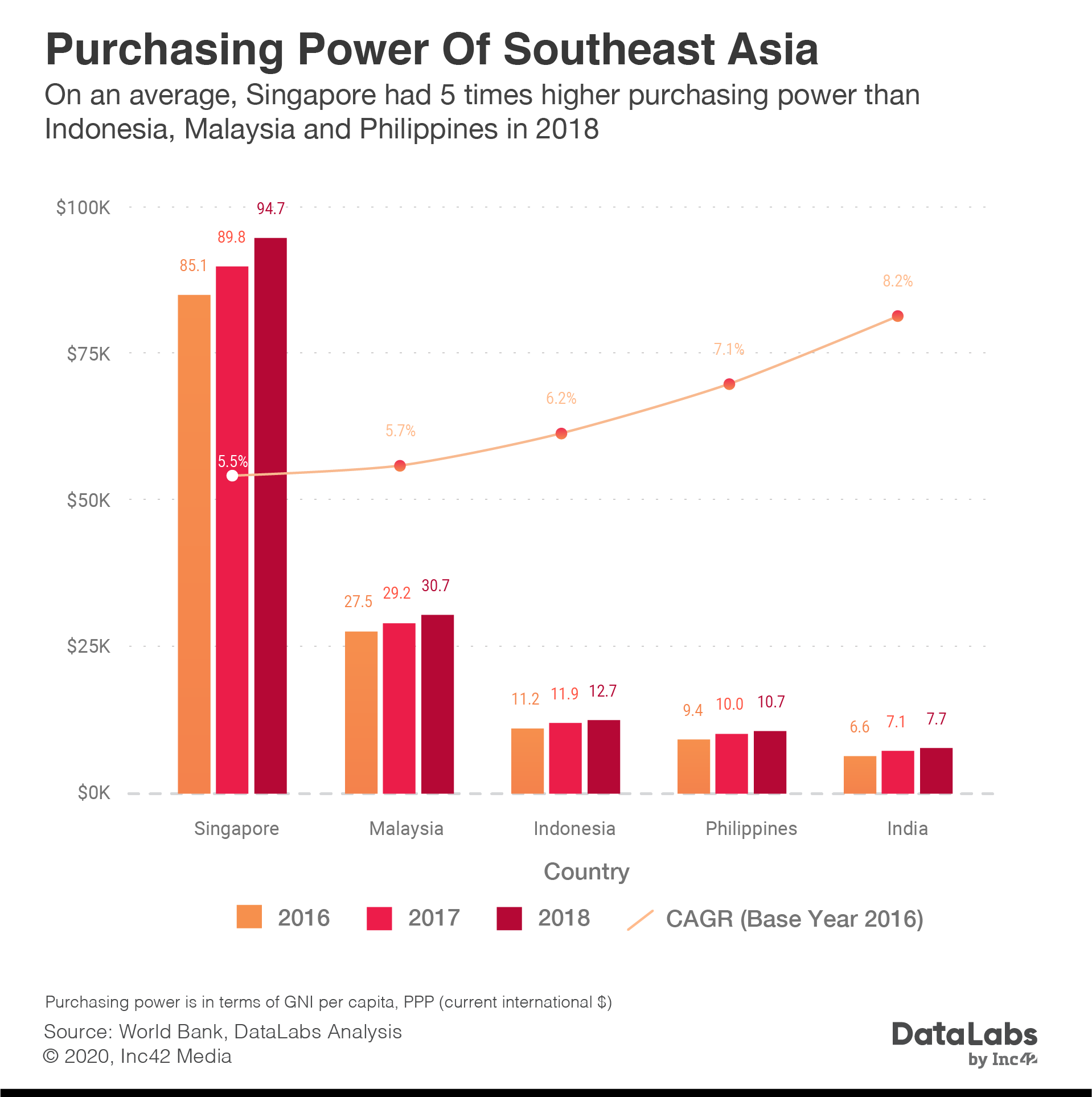 The countries are trying hard to make their business environment easier year-by-year with Singapore maintaining its lead in the latest report of doing business 2020 by World Bank. The Philippines experienced an improvement of 29 places from 2018 which is also the highest improvement jump in all of Southeast Asia. 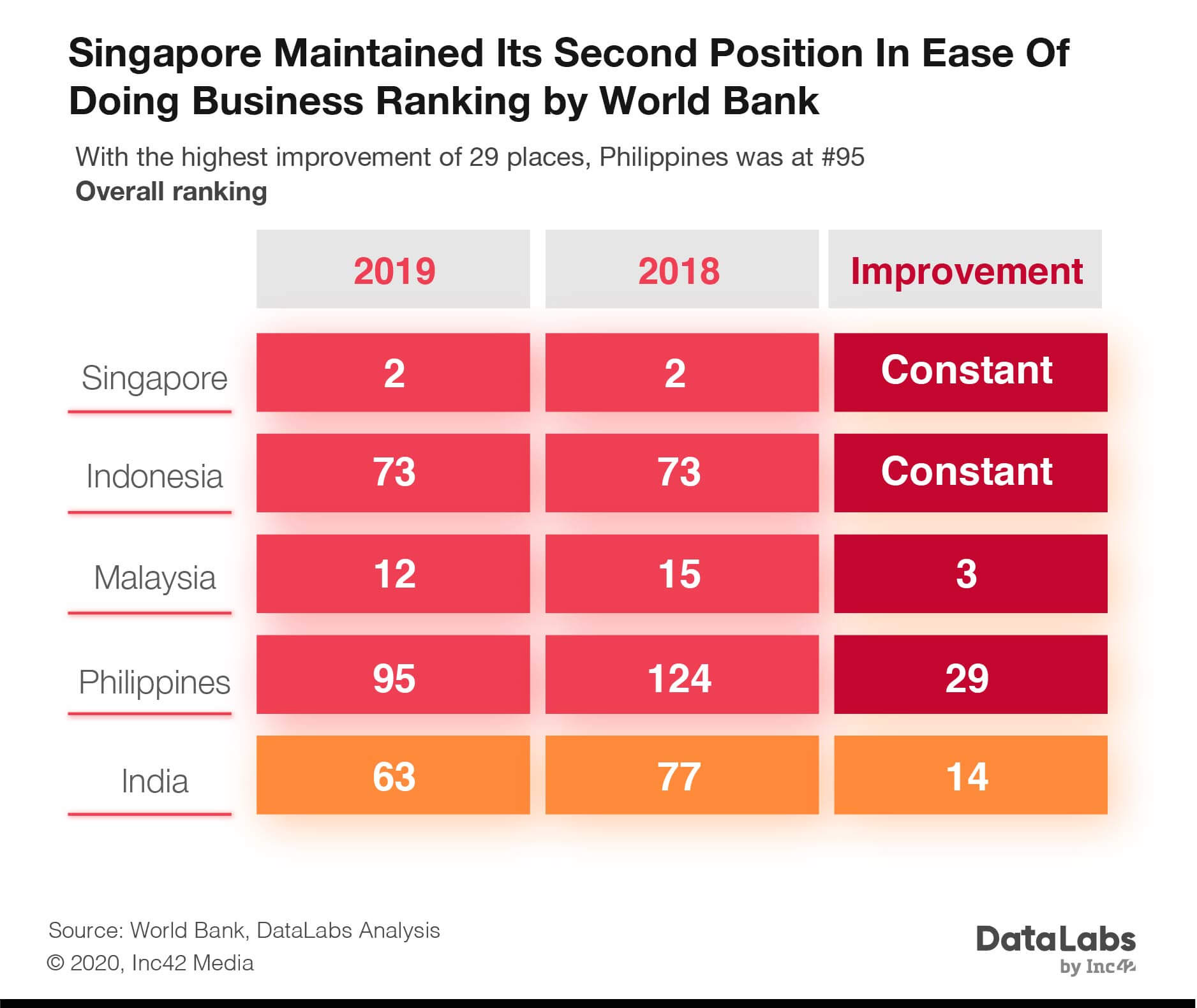 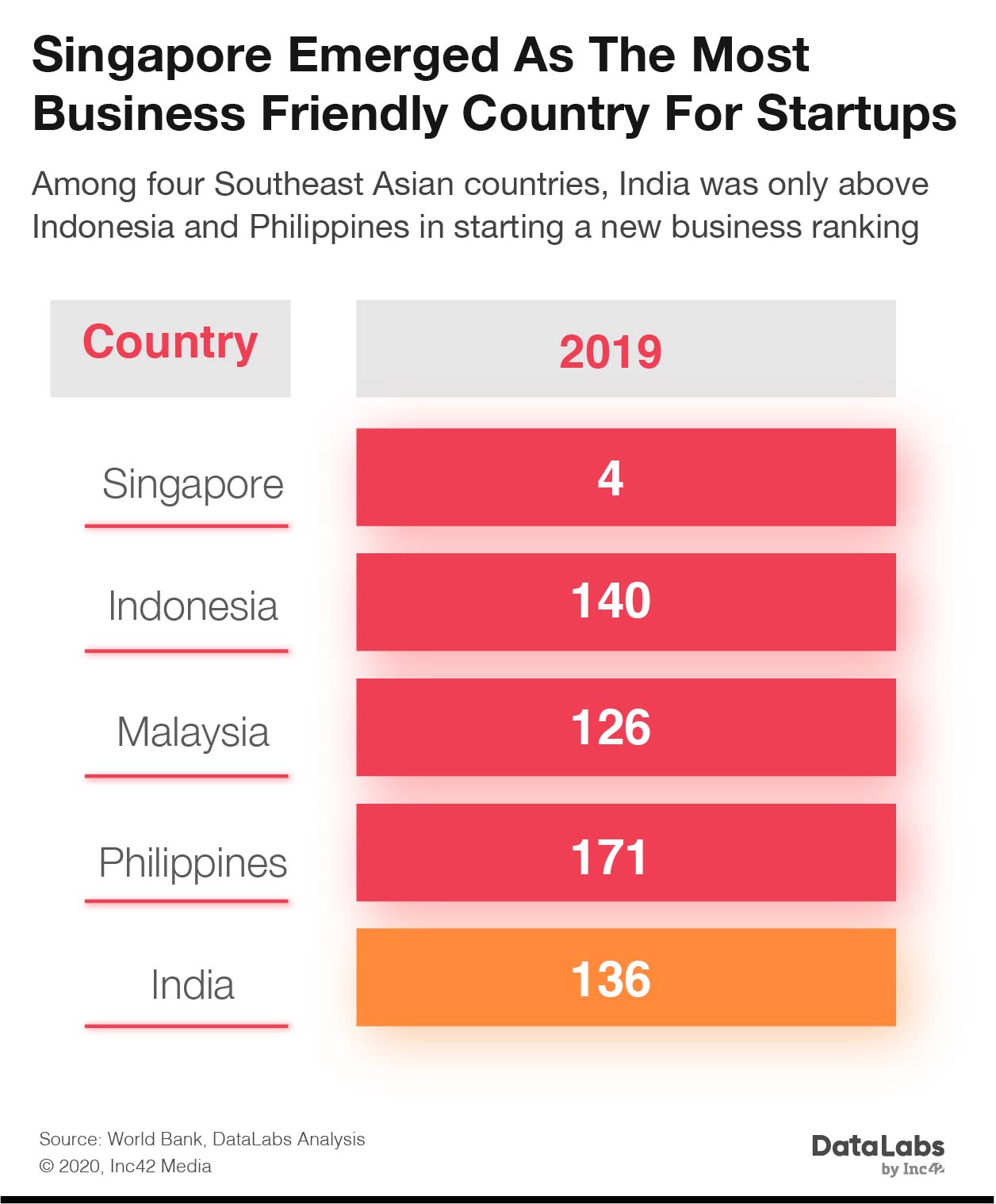 So why are these markets still attractive to Indian startups?

Indonesia and the Philippines have a few factors in common with India. Comparable gross national income, high population growth and low operational costs are few of the similarities between India and the two Southeast Asian countries that are driving startups to these markets.

These economies also hold individual similarities — Indonesia with its large population and being a heterogeneous nation in ethnic and religious terms similar to India, and the Philippines proved to be a feasible location in terms of high English-speaking population and low-cost labour makes it easy for foreign players to expand in these countries. 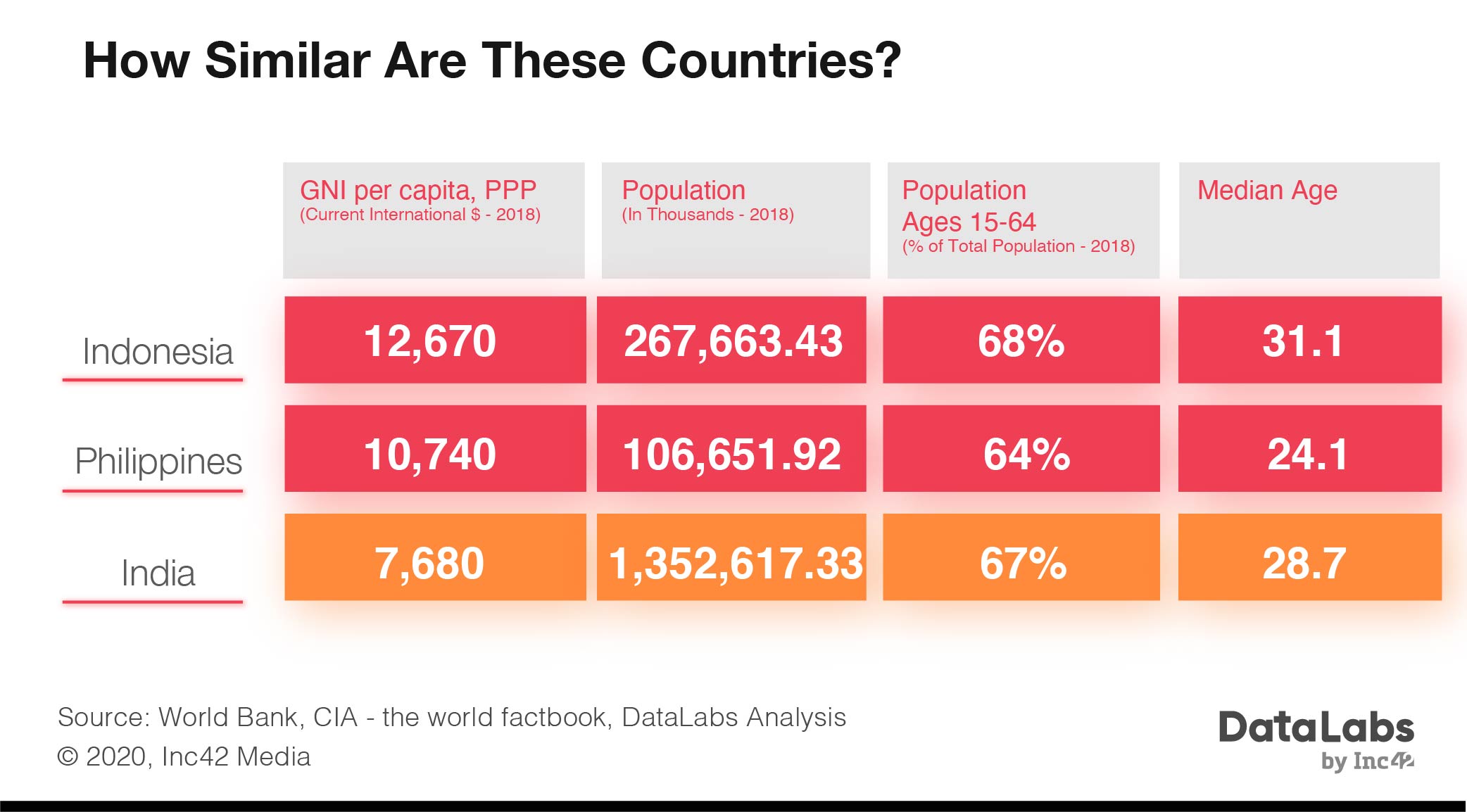 Indian market is just not enough for some high-growth Indian startups. With the rise in competition from well-established foreign players — think of Ola versus Uber, Flipkart versus Amazon — who are bullish about India as a high-growth market in terms of the number of internet users and rising purchasing power. But firms might face market saturation in the country with deep-pocketed players acquiring users left, right and centre. Others look for higher revenue by entering new markets with similar demographics and more purchasing power. This is where SE Asia has shown the way.

There is huge potential with consumers in Southeast Asian markets just like in India, but with a more affluent demographic, startups can actually reap richer rewards with the right approach in Southeast Asia. On average, the gross national income of the favoured locations in this region is 4.6x higher than India.

As there is quite a long list of Southeast Asian investors investing in India, Indian startups are actively leveraging the knowledge and local expertise of these investors and business partners to navigate and establish their footprint globally.

Governments have been making a collaborative push over the past years to attract businesses using fiscal policy tools such as tax incentives. Some of these benefits may involve setting up special or designated economic zones, granting additional tax allowances and credits to investments, providing tax exemption and concessionary tax rates, personal tax reductions, as well as indirect tax and customs incentives.

In recent development, these countries have paved their way for boosting their business environment. Some of the noticeable changes are: 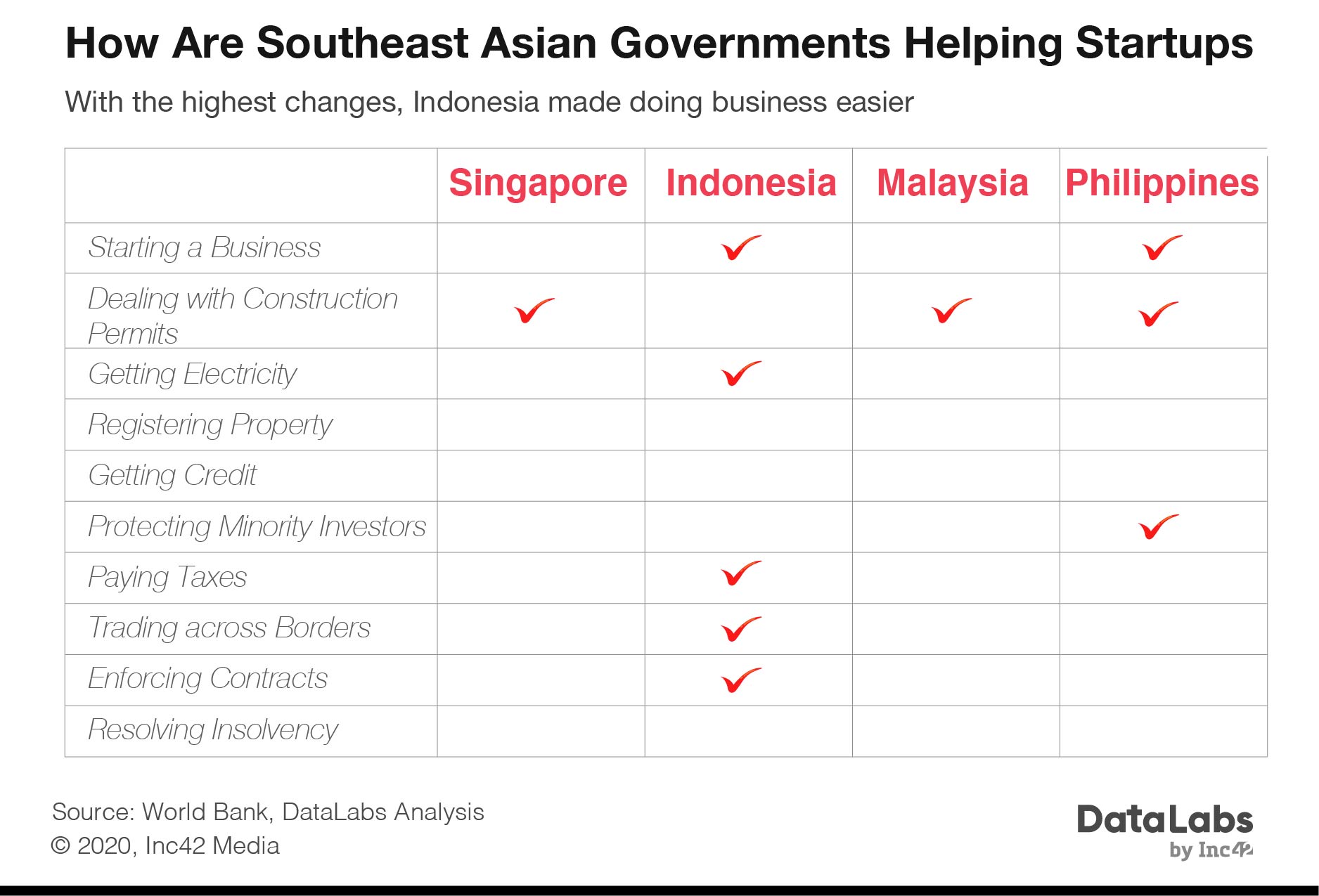 Powered by these fundamental changes in consumer behaviour, increased purchasing power, favourable government policies and ever-growing digital economy, Southeast Asia is in the process of becoming a hub for Indian startups to set up their next business unit. Be it in terms of shifting their headquarters altogether or expanding their international footprint, Southeast Asia has got too many advantages for Indian startups to look for.