It was not long ago that consumer brands and product makers had no option but to turn to the retail market for scale and growth. With the rise of ecommerce marketplaces, this began changing gradually, before brands turned to the D2C (direct to consumer) models to circumvent these middle layers.

The growth story of D2C in India is linked to the rising preference of consumers in the Covid era towards buying products directly from the makers through online channels. Not only this, many traditional brands such as Ajanta-Orpat, Cornitos, LG, Kiehl’s, Havells have also shifted to D2C model. Even the world’s most valuable brand Apple has launched its native online store in India to cater to the new normal.

In recent years, some of the most prominent D2C Indian startups have witnessed massive scale in adoption. As per Inc42 Plus estimates, the average year-on-year revenue surge of the 11 most prominent D2C brands across categories was more than 200%.

Thanks to the adoption wave and growing sales, D2C brands have not only caught the attention of consumers but have also become investor favourites in recent months.

Just like in more mature economies in the West, the advancements and developments related to the ecommerce ecosystem in India, have led to the evolution of hordes of D2C brands in India. With over 500 brands and counting, now riding the D2C wave in India, there’s a palpable excitement in the air around this segment.

In India, the direct-to-consumer model is unlike many other geographies, in that brands can rarely afford to rely only on their native online channels for sales, although that is the first step in going D2C. Rising digital buyer penetration among internet users, reaching to 70.7% in FY20, creates a suitable opportunity for brands to go the D2C way.

With a mix of ecommerce marketplace presence as well as retail penetration, D2C in India is decidedly omnichannel. While most brands are looking to drive traffic and therefore sales to their native websites and apps, they continue to sell on marketplaces in the hope of attracting many buyers unfamiliar with the brand.

The key difference between selling on a marketplace and using a native channel such as a single-brand storefront or app is that the latter helps brands capture robust data about consumers and visitors.

Data analytics tools are helping brands sell more by leveraging consumer buying patterns and preferences, collect feedback to iterate on products, and create a customer experience strategy. Plus, the presence of ecommerce software providers such as Shopify, Wix, Woocommerce and others have erased the entry barriers for new online stores. All this means going D2C is far easier now than ever before, plus there’s significant attention from venture capitalists (VC) and angel investors on this segment.

The D2C segment has seen significant investor activity for the past few years as from a market conditions and business point of view, India’s mature ecommerce ecosystem makes it easier for vertical or niche ecommerce plays to scale up.

Although the trust of investors wavered in the space in the immediate aftermath of the Covid-19 pandemic in early March 2020, this can be seen as a universal phenomenon rather than a drop in confidence in D2C. Investments in D2C startups declined by 69.0% in Q3 2020 compared to the previous year, with total funding of $ 117.6 Mn through 30 deals. 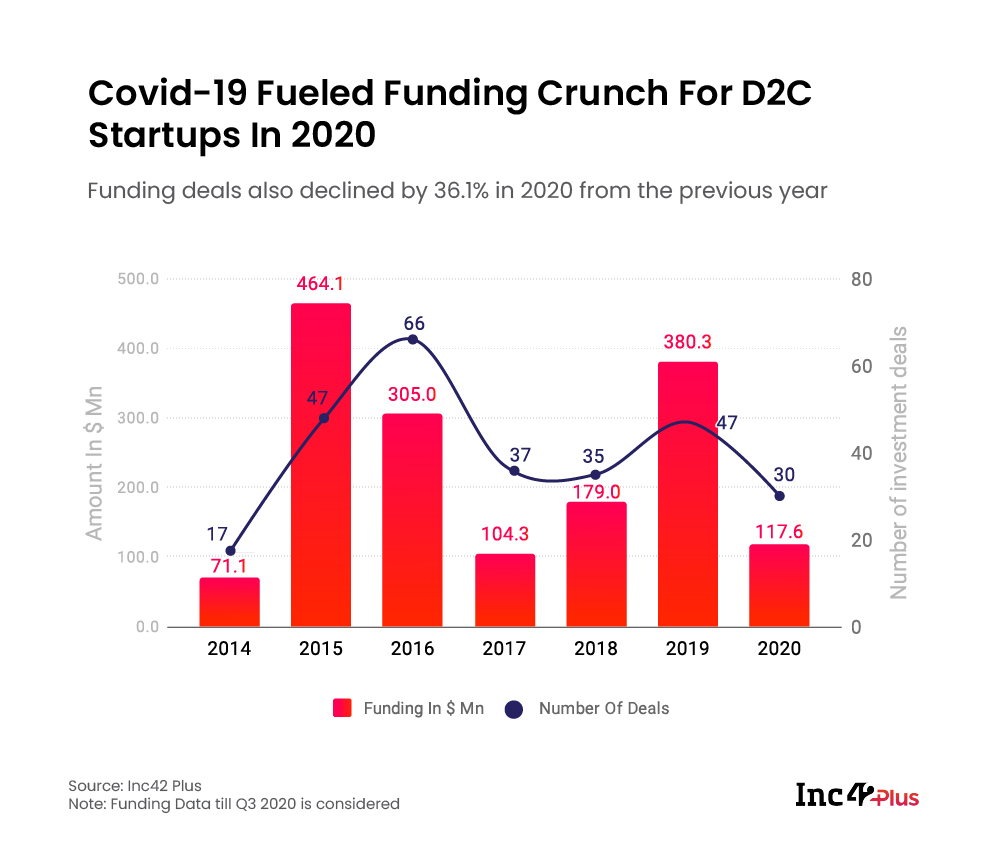 There’s little doubt that fashion is the most lucrative category for D2C brands not only from the perspective of the consumer base but also funding outlook. Fashion brands have secured the most funding ($876.2 Mn) among D2C brands with 65 unique fashion startups drawing in investments.  Among the D2C fashion startups are the likes of Fablestreet, Bombay Shirt Company, Clovia, Bewakoof, StalkBuyLove and Lenskart

But there’s definitely room for more players. According to financial services firm Avendus Capital, India’s online fashion market stood at $8.8 Bn in 2019, with 9% penetration of the total fashion market. With 150 Mn online shoppers for the fashion and beauty segment in 2019, it is also a category with one of the highest margins in ecommerce.

Another major reason is that online fashion is attractive for investors since it’s not a winner-takes-all market due to the various segments and the fragmented nature of the consumer base, giving room to both small, niche and large players to exist. 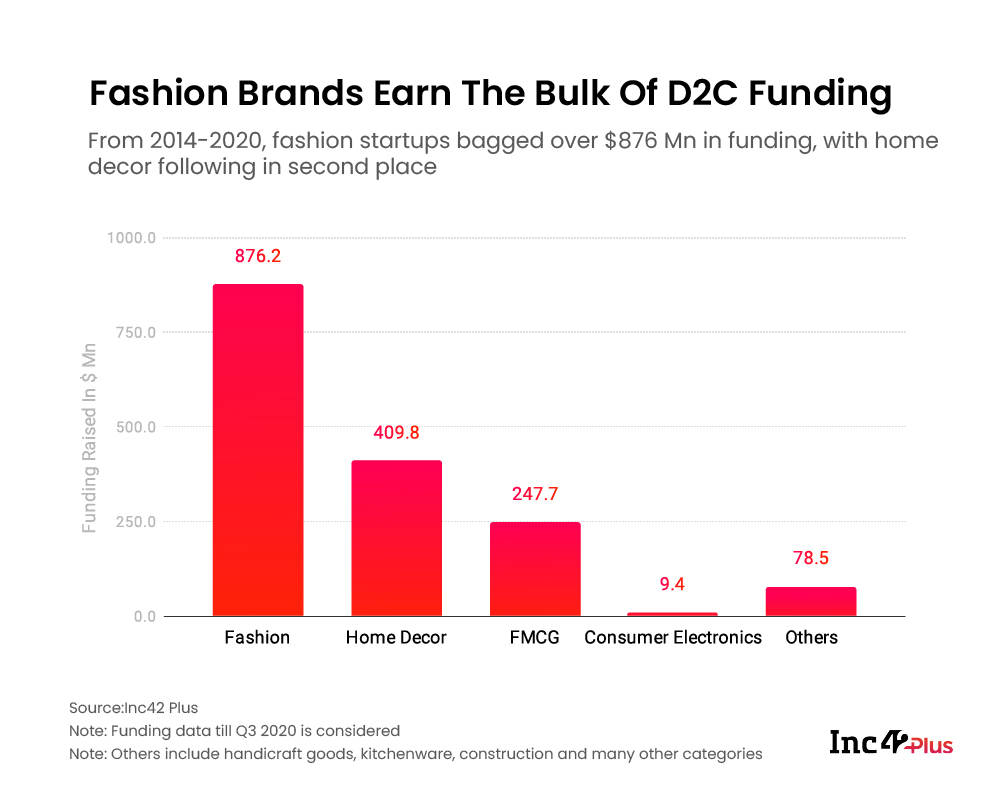 Besides fashion, the D2C wave is redefining the furniture, home decor and furnishings market as well with investors backing startups catering to this space. With 41 deals, a total amount of $409.8 Mn has been raised during 2014-2020 by home decor, online furniture startups. 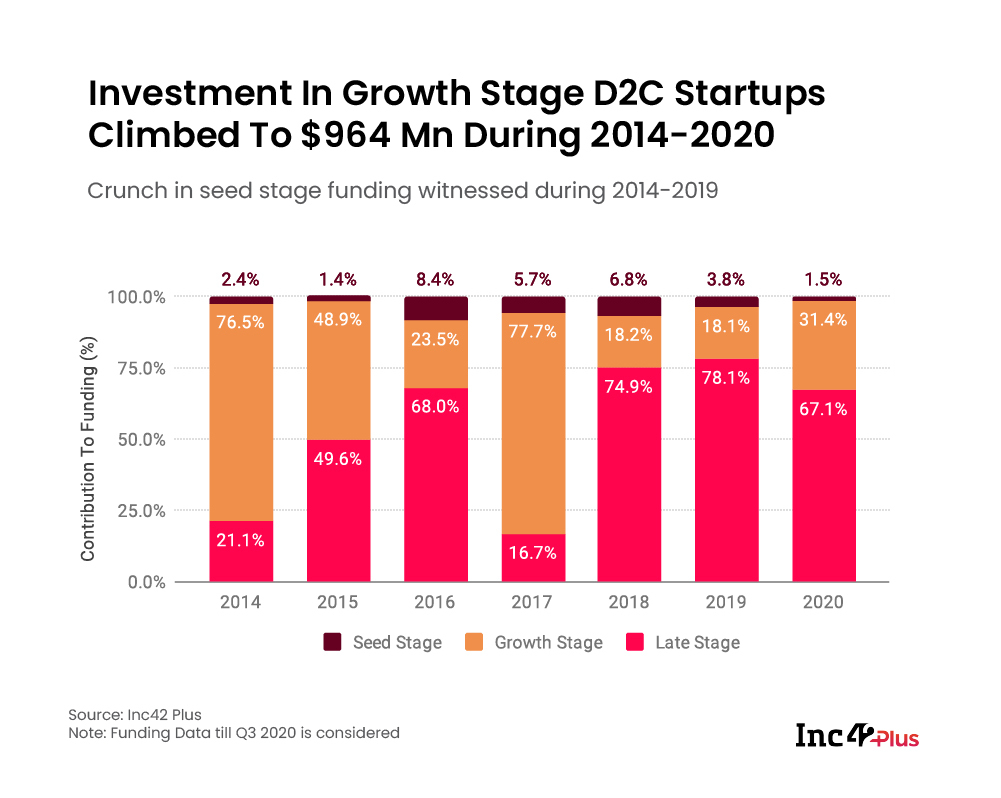 Fashion is the major category among the late-stage D2C startups contributing around 54% to the total funding raised during 2014 to Q3 2020.  Lenskart, market leader in the online eyewear market with 650+ stores across India and Southeast Asia, was among the major funded late-stage startups, raising $354.7 Mn from 2014 to  Q3 2020

Despite the highest number of investment deals (124) in the seed stage D2C startups, the contribution of seed funding towards the total funding in D2C startups remained miniscule (4.21%) from 2014 to Q3 2020. Sukkhi, Melorra, and BoAT were the major D2C startups raising funding at the seed stage during this period.

The Investors Backing D2C In India

Lightbox Ventures and DSG Consumer Partners were the active investors in the D2C space who invested post Covid-19.

This year, Mumbai-based venture capital firm Lightbox Ventures invested in online furniture rental startup Furlenco in a $10 Mn round in April 2020. The VC also invested in jewellery D2C brand Melorra in two rounds, in June and September 2020 and has been among the most active investors in the D2C space this year. 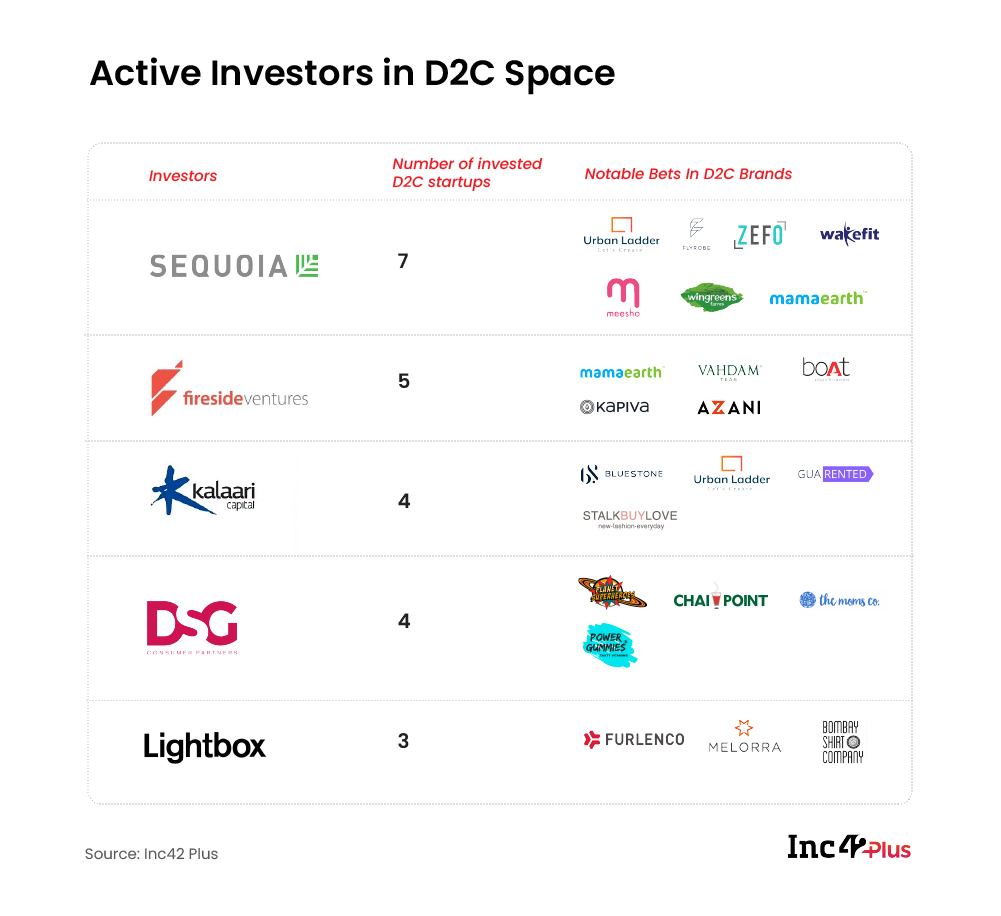 Will D2C Be The New Normal?

As more consumers start embracing online shopping and ecommerce for everyday needs, the more mature segments in the Indian market are clearly backing D2C brands. And with rapid growth, many D2C brands are seeing growth beyond metros cities and in Tier 2 and 3 markets as well. While an online storefront was considered nice-to-have earlier, now it has become a necessity for brands.

And yes, in India, native D2C plays have to be backed by third-party marketplace and retail presence, to reach all segments of consumers, so brands have multiple fronts to seek growth and revenue.

Boosted by the rise of digital payments, app technology, cheaper data plans and the big push for digital consumers during the Covid-19 lockdown, more brands are going the direct-to-consumer (D2C) route, looking to control the whole stack with vertical integration — just like tech companies. The internet has helped digitally native brands scale up by leveraging Facebook, Instagram ads and influencer campaigns to gain end-to-end control of its products from factories to the customers and have a better understanding of the target group.

And by the looks of it, the Indian market has all the right ingredients for D2C success, with even investors joining the bandwagon.