Foodtech startup Zomato has recently introduced a weekly ‘minimum guarantee’ payout for delivery partners, which is currently being tested in Delhi 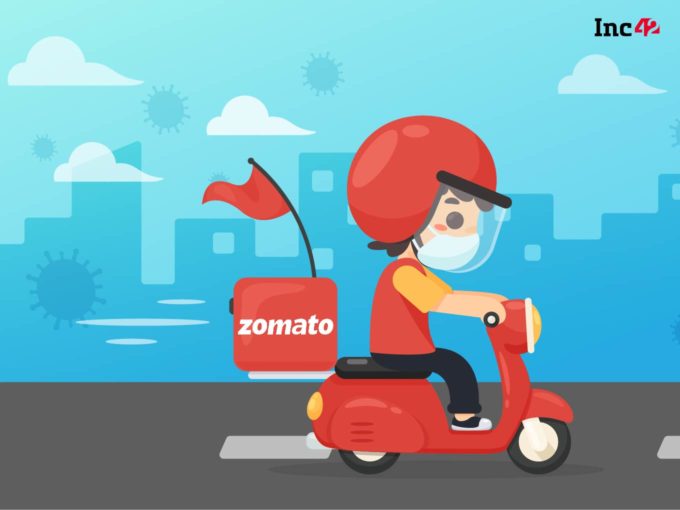 Food delivery and restaurant discovery startup Zomato has been quietly hiring and employing delivery partners on a fixed-hour basis while ensuring a weekly ‘minimum guarantee’ payout, Inc42 has learnt from delivery executives and other sources who track the segment.

The new payout system, which ensures a payment of INR 4,000-5,000 a week, is currently being tested on a pilot basis in Delhi. The minimum payout to delivery executives is made to their bank accounts when they meet a target of 60-65 hours a week. The new compensation model also provides a monthly compensation of INR 26-28K a month which is higher than the market norms, according to three delivery executives with whom Inc42 spoke.

According to one delivery executive who works for Zomato in Delhi, the food delivery startup has been hiring these employees over the last four months, and has already onboarded around 200 executives on a permanent role. However, the ‘minimum guarantee’ payment system is only being tested in areas with high order density such as Delhi’s Saket, Malviya Nagar, Hauz Khaz Anand Vihar and Mayur Vihar.

“I have been working for Zomato for the past two years, and two months ago, the company offered me a new deal.  It promised me a fixed weekly income where I was required to log a minimum of 260 hours a month and 65 hours a week. I readily accepted the offer as it gives a higher pay of around INR 28K,” said the delivery executive quoted above, requesting not to be named as he is not allowed to discuss his employment details with the media.

The new weekly payout system is a staggering shift away from the existing payment system that pays delivery executives for every order. Usually, the delivery people on platforms such as Swiggy, Zomato and Dunzo make a fixed cut out of the order value, along with a daily or weekly incentive component for completing a predetermined number of deliveries.

Two delivery executives, who are currently working in the new role, pointed out that Zomato, however, has not offered any accident or health insurance benefit under the new ‘minimum guarantee’ system.


In an emailed response to Inc42, a Zomato spokesperson said that the delivery firm does not offer any fixed compensation structure and reiterated that it offers medical and accidental insurance cover to all its delivery partners.


“We follow the same remuneration metrics for all our delivery partners, which are not fixed and are based on the number of orders delivered. We also offer a minimum business guarantee so that their earnings are not impacted and they are incentivised for the hours they spend on the platform,” the person added.

According to Zomato,  the startup has been piloting a “premium delivery fleet” to ensure optimum customer experience for frequent and high-end customers. According to the spokesperson, delivery partners in the new compensation model are incentivised, based on their performances and they have weekly login hour milestones instead of daily ones.

“They are not penalised for not meeting any criterion and rather incentivised for fulfilling them.”

However, a June 2020 job listing posted by Zomato on the online recruitment marketplace Aasaanjobs, proves otherwise. The job listing states that Zomato has an uptake of up to 450 delivery workers under the new ‘minimum guarantee’ payout model. On bringing this to Zomato’s notice, a spokesperson for the firm termed the job posting as “not legit” and that the company would be “taking down those job listings immediately”.

It is important to note that job postings on the Aasaanjobs portal can be listed by third-party staffing companies or recruiters working on behalf of Zomato. However, when we applied for the job on the portal, a recruiting assistant from Aasaanjobs confirmed that the listing was, in fact, posted by Zomato. The hiring process mandates potential employees to fill in the details on the Zomato app as the first step in the process.

“Zomato has both full-time and part-time options now. If you want to be a part-timer, which is just seven-eight hours of work per day, you can make INR13-16K a month. But if you sign up for a full-time job and log more than 65 hours a week, Zomato will pay at least INR4.5-5K each week. For this, you have to work 11 hours a day and work on weekends as well. You can take only one off-day during the weekdays,” the Aasaanjobs recruiter representing Zomato told Inc42 over the phone.

Why Zomato Could Be Testing New Compensation Structure

According to policy and hiring experts with whom Inc42 spoke, Zomato’s fixed-payment structure is designed to showcase the delivery executive role as a freelance gig economy job, but the ‘minimum hours’ requirement blurs the definition.

Rituparna Chakraborty, executive vice president of the staffing firm TeamLease, says that Zomato’s assured-payment model for gig workers cannot be seen as the company’s attempt to classify delivery executives as permanent employees. She, however, adds that the model could be emulated by other hyperlocal delivery startups if Zomato makes some financial sense out of it.

However, a Delhi-based lawyer who works with gig economy firms says that the weekly ‘minimum guarantee’ payout based on fixed hours resembles the structure of most employment contracts, but Zomato seems to have carefully configured the model to avoid being treated as a permanent employer of delivery workers. The lawyer asks to remain anonymous as he is not permitted to speak on Zomato’s hiring processes.

“This (minimum guarantee) looks like a normal employment contract with fixed hours. Had it not been paid for a gig economy role (in this case, a delivery executive), Zomato would have to pay provident fund and other social security covers such as health insurance and accident cover,” he adds.

The lawyer quoted above also points out that delivery platforms usually create an ‘incentive-based’ payout system, designed as per the requirements of the company. These payment structures do not mandate social security benefits legally. Hence, it is up to the delivery firm to provide such benefits voluntarily.

Currently, platforms such as Swiggy, Zomato and Dunzo classify their delivery workers as non-contractual employees who do not hold a permanent place in their payrolls. This is because globally, gig economy workers are seen as ‘freelance employees’ who take up the role to earn a quick buck or opt for it as a secondary source of income. But in India, most gig workers such as delivery workers and cab drivers on Uber and Ola depend on these ‘gig economy’ jobs as their primary source of income.

“From a regulatory standpoint, this (conundrum) is difficult to address because if an employee is working with a company on a full-time basis, certain employment codes must be followed according to labour laws. But when a company is hiring workers without the intention of classifying them as full-time workers, and if the workers themselves see this is a lucrative model, then it is up to the Indian government to intervene and introduce social security,” says the lawyer mentioned above.

This is precisely what the Indian government has envisioned. It has recently introduced the Code on Social Security, 2020, which was passed by Parliament in the last monsoon session. The new code requires gig economy startups and companies to contribute a part of their revenue to a social security fund for gig and platform workers. It also outlines other benefits such as health and accident cover for gig and platform workers.

But the new social security code is currently deliberated upon as a recommendation and yet to be implemented by the government. Delivery workers are also pushing to implement it at the earliest as they have been protesting against the lack of social security and the sudden change in payment structures in recent months.

Since September this year, Swiggy’s delivery workers have gone on strike in Chennai, Hyderabad and Noida, protesting against a dip in their minimum payout per delivery from INR 35 to INR 15, and the removal of monthly incentives to the tune of INR 5,000. The company’s spokesperson has denied these allegations made by the workers and also claimed that their wages have gone up after the lockdowns induced by the Covid-19 pandemic. Similar protests by Ola and Uber cab drivers have been covered by Inc42, with the cab drivers’ unions complaining about the 20-25% commission of the ride fare being charged by these companies.

Recently, a report titled Fairwork India Ratings 2020: Labour Standards in the Platform Economy ranked delivery platforms such as Swiggy, Zomato and Uber as the worst place for work in terms of working conditions. The report assesses companies against five principles, namely, fair play, fair conditions, fair contracts, fair management and fair representation. Swiggy and Zomato, as well as cab aggregator Uber, have scored 1 out of 10 when judged against the criteria mentioned above.

The Fairwork India report, which rates Zomato on a lower scale in terms of working conditions, also comes at a time when the foodtech firm has been reportedly gearing up for an initial public offering (IPO). According to a Moneycontrol report last month, Zomato has appointed Kotak Mahindra Bank as the lead merchant bank for the proposed IPO and also brought in Cyril Amarchand Mangaldas and Indus Law as legal advisors.

One of the reasons why Zomato is testing assured payments could be to determine whether the model would improve its bottom line, thus improving its financial outlook before an expected IPO. But whether the assured payment model would make sense for Zomato remains to be seen. If it will pass muster, the model may start cropping up on other delivery platforms as well.