The Grand Finale of the 4th India-UK TECH Rocketship Awards was held today at the India-UK Createch Summit in Mumbai. A total of seven finalists were awarded in the grand finale from the 15 semi-finalists that pitched at Bengaluru last month. 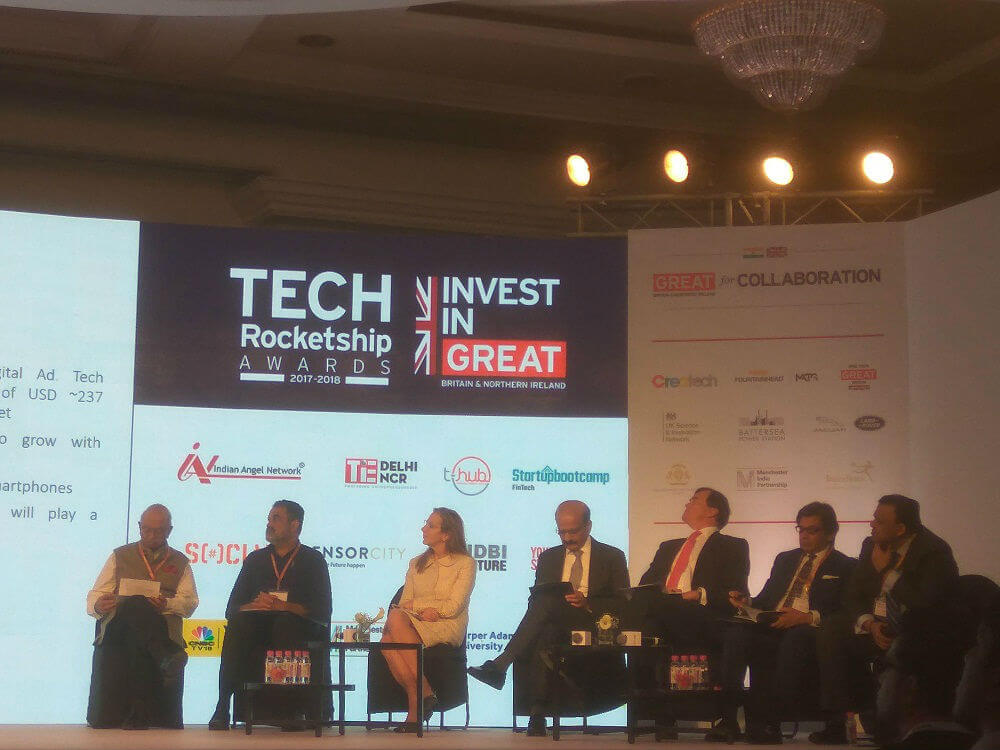 According to the official release, more than 300 applications and 1300 entrepreneurs participated in the fourth edition of TECH Rocketship Awards, which was announced in October 2017.

Of these, 15 of the best tech startups across diverse sectors like cybersecurity and artificial intelligence were selected for the live pitching round which was held in Bengaluru last month. The UK government’s Department for International Trade (DIT), India and the British Deputy High Commission, Bengaluru hosted the 2017-18 TECH Rocketship Awards’ live pitching round at Bengaluru.

A Quick Look At The TECH Rocketship Awards

Organised by the Department for International Trade (DIT), TECH Rocketship is an India-focussed startup campaign that assists promising new startups in scale up their businesses. Its main aim is to foster technology, innovation and collaboration between startups, universities, and industry leaders both in India and the UK.

The awards, which were launched three years ago, have seen endorsement from The Duke and Duchess of Cambridge, British Prime Minister Theresa May as well as some of the biggest names in Indian business.

The six award categories of 2017-18 TECH Rocketship Awards were fintech, medtech, Internet of Things (IoT), cloud computing and data analytics, cybersecurity and artificial intelligence. These domains, according to the organisers, are some of the areas with the greatest potential in terms of opportunity and demand in the UK and India.

Last year, as part of the third edition of TECH Rocketship Awards, held between 29 January-3 February 2017, 10 startups won a trip to the UK out of 10,000 companies evaluated in a multi-city tour.

Thirdwatch: AI startup Thirdwatch won under the Cybersecurity category. Launched in April 2016 by Adarsh Jain and Shashank Agarwal, Gurugram-based Thirdwatch offers the product ‘Mitra’ which evaluates and flags every transaction in real-time as fraudulent or genuine on the basis of a trust score. Ecommerce players and merchants can integrate the application with Mitra API which automatically blocks fraudsters at large scale, without having to hire additional staff for fraud review.

Mimyk: The medtech startup founded by Shanthanu Chakravarthy and Nithin Shivshankar in 2017, won in the Medtech category. It works on developing immersive medical simulations for training healthcare practitioners. Their technology enables training healthcare professionals through the use of advanced simulation technology. They combine haptics, design, Virtual Reality (VR), and internet based content delivery model for providing engaging interactive medical simulations.

CropIn Technology: Agritech startup CropIn won the Judge’s Award for Creativity. CropIn was founded in 2010 by Krishna Kumar. It integrates the agricultural sector with Information and Communication Technology (ICT) by putting a network of ERP and BI (Business Intelligence) across rural India. Last September, the Bengaluru-based agritech startup raised an undisclosed amount of Pre-Series A funding from Singapore-based Beenext, and existing investors Ankur Capital and Boston-based organisation Invested Development.

In addition to seven prize packages, the winners of the fourth edition of TECH Rocketship awards challenge will win a trip to the UK as well as a chance to pitch in front of potential investors at the London Tech Week. Furthermore, the shortlisted teams will be provided assistance in business development and partnership with established UK companies like Harper Adams University, Sensor City. The winning startups will also get exposure to the UK’s thriving tech ecosystem, financial services and R&D opportunities.