Just a day after foodtech startup Swiggy was honoured as one of the top nine startups at The Economic Times Startup Awards 2017; it has been accused of cheating partner restaurants and fudging business numbers by four of its employees.

The Tumblr blogpost was published anonymously with the title Swiggy, A House Of Cards. But, the four writers claim to have worked in Swiggy – two former employees while two are still associated with the company. They have written in detail about the business practices adopted by the foodtech startup. 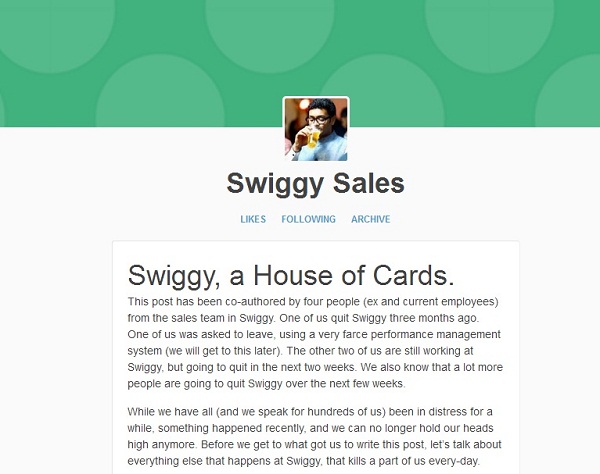 The blogpost claimed that Swiggy cheats its restaurant partners by rapidly increasing commissions and violating contractual obligations and promises with the “so-called” partners.

It stated, “We are made to lie about our market share, as well as order volumes to restaurant owners. The worst part is that instead of helping these restaurants grow their business, we are trained to arm-twist them to increase our commissions every couple of months. Some restaurants are paying us more than their net margins because Swiggy in some areas in Hyderabad and Bengaluru has been able to become a significant portion of their revenues.” 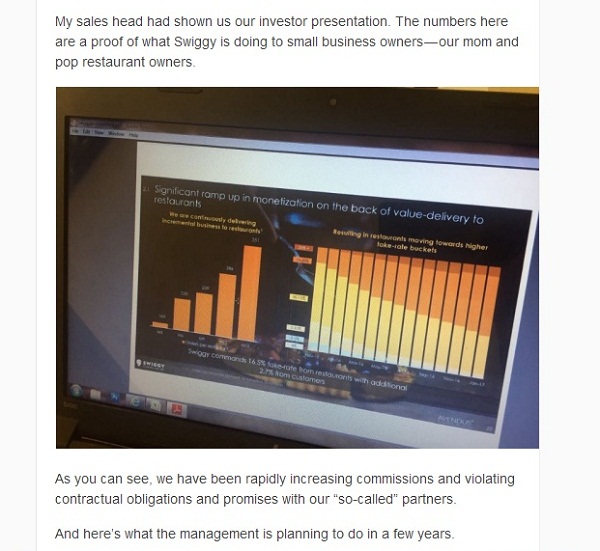 It further added that the management aims to take the average commission rate to 30% in 2022, a number at which small restaurants will bleed “because the big guys will never pay anything more than 20%.” It further alleges that, instead of growing the restaurant partner’s businesses, the foodtech startup intentionally routes all the users to order from the Bowl Company, Swiggy’s own private label kitchen, while the sales team is asked to tell the restaurant ‘partners’ that Bowl Company doesn’t compete with them.

The whistle blowers have also accused the startup of cheating users by planting good reviews on social media and deliberately hiding genuine reviews.

Going further, the foodtech startup has been accused of manipulating business data in a presentation to its investors by fudging numbers on order volumes. Founded in August 2014 by Sriharsha Majety, Nandan Reddy, and Rahul Jaimini, the platform is backed by the likes of South African Internet and media conglomerate Naspers, venture capital funds SAIF Partners and Accel Partners, among others. Recently, it raised about $80 Mn Series E funding led by South African Internet and media conglomerate Naspers. This takes Swiggy’s total funding raised till date to about $155.5 Mn.

As the blog stated, “We know for a fact that our management has lied to investors about our order volumes during the latest fundraise. Our January 2017 order volumes were less than December 2016 volumes. Yes, we had a decline of order volumes in January. But we have seen the investor presentations, and they have shaved off the December numbers in the slides in order to show a linear growth curve across all months of our existence.” 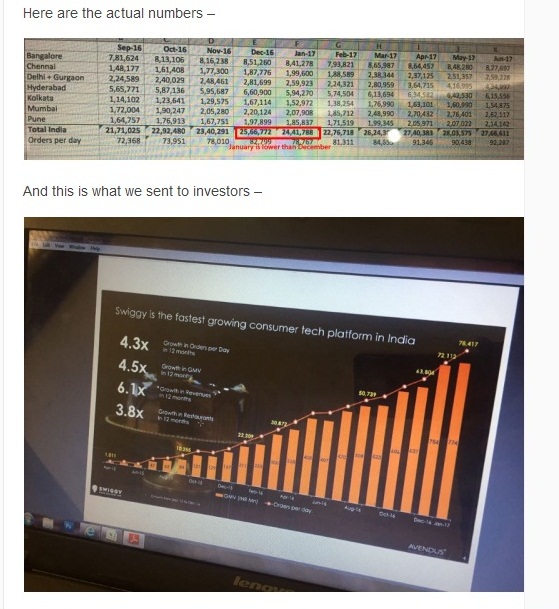 Furthermore, it mentioned that the highest order volumes the company ever reached was less than 3 Mn orders a month but the company has been inflating the number to 4 Mn in the media after it revoked access to the order volume tracking dashboards for the employees.

Swiggy employees have also accused the management of making false promises about equity and bonuses that were never paid. They claimed that all the good engineers, head of engineering, VP product, head of recruitment, many good managers, and team leads have already left.

It further stated, “At any given point in time, 10–15% people are always on Performance Improvement Plans (PIPs) and showed the door. There’s so much churn and so much dissatisfaction. The job market is bad, and the management is making the most of it. All the hiring in the last year is done just to cover up the numbers for the press.

The HR team here is the worst. I have friends who have quit or were fired and after repeated follow-ups were not paid their final settlements or bonuses. They also keep changing the policies subtly to avoid paying variable salaries to the employees.”

Apparently, the two current employees who, along with their former colleagues have posted the blog post, are also claiming to be leaving Swiggy in another two weeks. 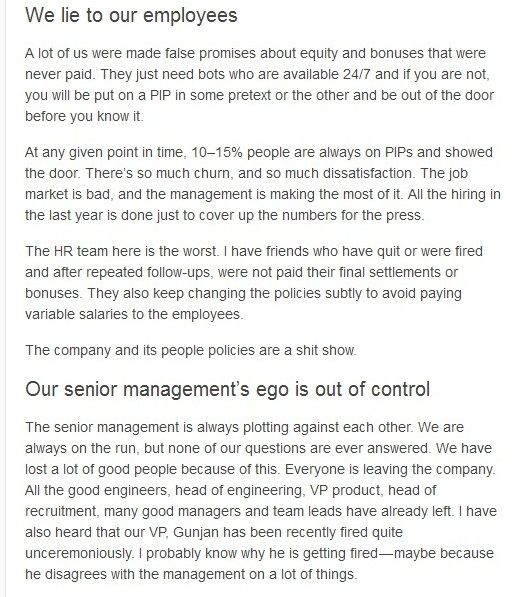 The bloggers further claimed that Swiggy keeps on changing its incentives for delivery boys every now and then, with the result that their monthly payouts keep dwindling. There are no background checks done nor are they provided health insurance.

Lastly, the whistleblowers accused the management of the startup of solely looking to make a quick buck rather than building a company. 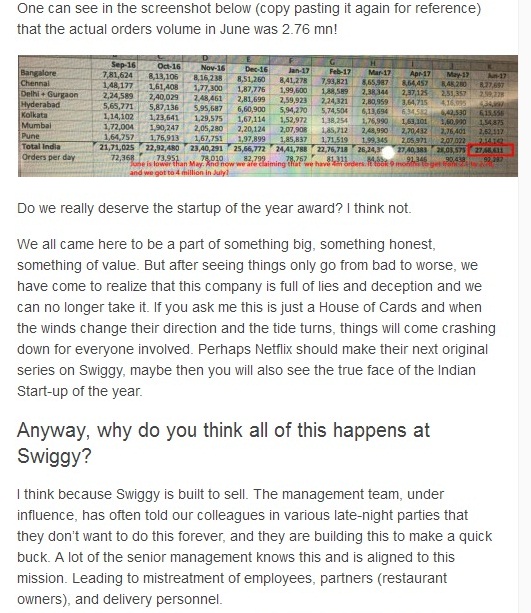 When Inc42 contacted Swiggy about the accusations made in the blog, the company provided the following response,

“The recent blog post from an anonymous source is targeted at maligning the reputation of Swiggy as an organisation. The article carries inaccurate facts regarding business and order numbers. It not only references employee departures from a year and a half back, but also presents details on our partners out of context and with mischievous intent. Swiggy has grown over the last few years on the back of strong support from our restaurant partners, employees, delivery executives, consumers, and investors. Our restaurant partners are at the heart of our success – our joint vision of providing a complete food ordering and delivery solution from the best neighbourhood restaurants inspire us. Our employees are the keepers of our soul – as a startup organisation, we take pride in the culture of mutual respect and common purpose that has helped us grow, thus far. We are committed to winning together with all our stakeholders who we have always engaged with, in complete transparency and integrity.”

Last year also, a similar issue over charging the wrong amount of VAT and service tax by the company had been brought to light by angel investor Utsav Somani. Given the serious allegations against the foodtech startup, it seems Swiggy will have to do more to dispel these accusations than just dismiss them.

Swiggy CEO, Sriharsha Majety has responded to these allegations made by anonymous employees over fudging numbers in a blogpost.

On Tampering Numbers: He stated that the anonymous blogpost is falsified with completely incorrect data and details. In order to prove this, he has shared Swiggy’s growth numbers till January 17, which he mentions have “been verified by external, neutral auditors (a part of the big four) as a part of our standard due diligence that is done before every fund raise.” 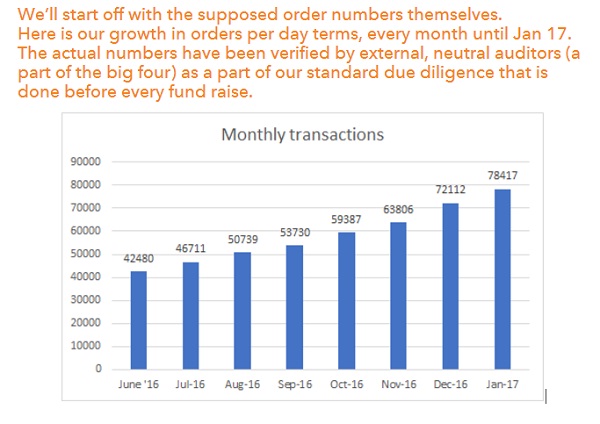 He further adds that the numbers have grown month on month every month, including January 2017, the month the anonymous writers picked on(and every subsequent month since) and the excel sheet in the anonymous blogpost is a fabrication. He also reiterated that Swiggy’s growth trajectory is very much at the 4 Mn orders per month run rate, for which he cited July last week’s numbers as proof. 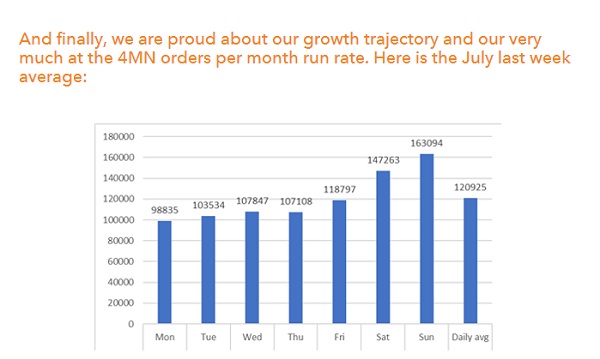 On Cheating Partner Restaurants And Investors: Countering the allegation that the foodtech startup cheats partner restaurants, Majety stated, “We’ve partnered with restaurants from the start of our journey and grown tremendously, mutually. Business commercials with restaurants are a part and parcel of the business. It is mutually agreed with gives and takes on both sides. There is no cheating, no deceit. We have fuelled the growth of many restaurants by exposing them to a large base of consumers on our platform – and many restaurants have grown because of us. We take pride in this.”

The post also stated that Swiggy does not lie about its market share or order numbers and the commissions the foodtech startup charges are a function of the value it generates for the restaurant.

Majety said, “The reason we started low is because we wanted to first convince the restaurant partners about the amount of value we bring to the table before requesting for higher numbers. Over time, since we’ve started, the value delivered to the partners has been clearly established lending to higher commissions. Also to clarify – Our revenue per order (the 30% that is being talked about) is a blend of three parts, the commission we get from the restaurants, delivery fee charged from the consumers and discretionary advertising revenues.”

He added that all the Swiggy commercial agreements are time-bound (usually six months), post which if the restaurants see value and if there is a commission number that both parties mutually agree on, an agreement gets signed. There is absolutely no violation of contractual obligations.

False Promises Made To Employees: Furthermore, he also refuted that Swiggy made any false promises to employees. The post states, “No false promises are made to any employees. Bonuses are paid fairly and transparently, as in any organisation with core values and processes intact. We have hired to support the strong growth we’ve seen. Our compensation structure is transparent, fair, and consistent. We pride ourselves on building a high-performance organisation but by hiring very meticulously, we’ve been able to keep the need for PIPs at a fraction of the number mentioned by the author.”

He further added that the examples given of people who left are dated and those people left naturally, over a year and a half back.

On the topic of delivery executives, the post mentioned that “providing for a high-earning capability, the right training and development (personality, behavioural and communication skills), due rewards and recognition, and financial assistance is key to our engagement with the DEs.”

Majety stated, “We also understand that our delivery executives are our brand’s face to the consumers and we take great care in selecting them. Every Swiggy Delivery Executive undergoes a background verification before they are on-boarded. All delivery executives are provided with medical insurance for the family and a personal accident insurance, which is borne by the company.”

He also refuted the claims in the post that the order tracking dashboard has been made inaccessible to employees.

In the end, he concludes that, “We’ve built Swiggy with a vision to change the way India eats. We truly believe in our vision and work everyday to make this come to life. We’re definitely aligned to this mission as a management and leadership team, no doubt! We treat our employees, partners and deliver personnel with the utmost respect, honesty and integrity – aligned to our core values.”

[What The Financials] Swiggy Outpaces Zomato In Revenue Race Despite 66% Higher ...