Reliance Jio Spoilt For Choice As Microsoft, Google Slug It Out For Stake

Reliance Jio Spoilt For Choice As Microsoft, Google Slug It Out For Stake

Are Google and Microsoft looking to back Jio to prevent Facebook from dominating Indian market?

Interestingly, Google is also speculated to be investing in Vodafone Idea 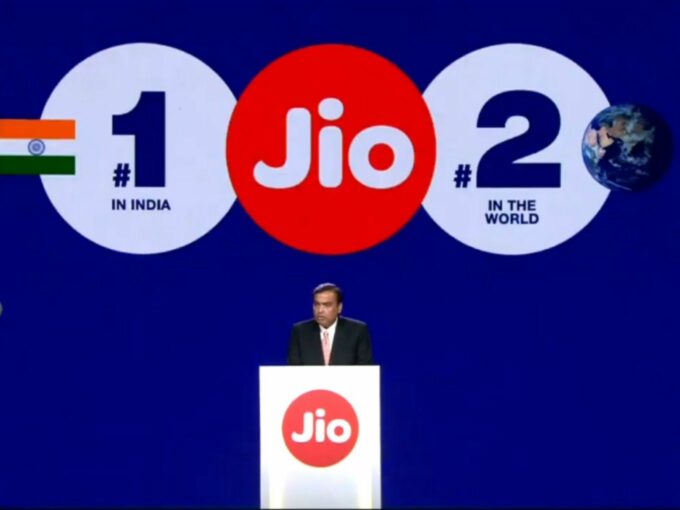 Mukesh Ambani-led Reliance Jio’s massive funding spree will end at some point, but the company’s backers may include more tech giants besides Facebook as per new reports.

Besides the likes of private equity fund TPG which is speculated to join the cap table, Reliance Jio may have to choose between global tech giants Google and Microsoft for a potential investment.

According to a Business Insider report citing sources, Google and Microsoft are looking to get a 6% stake in the Reliance Industries’ digital venture Jio Platforms, which would be valued at well over INR 30K Cr. Given that Jio Platforms has already given up over 20% of its business in exchange for INR 97,885.65 Cr. The report also adds that Google was in talks with Reliance Jio, but lost out to Facebook in closing the deal.

The company has raised this capital from leading investors such as Facebook, Silver Lake, Vista Equity Partners, General Atlantic, KKR, Mubadala and Abu Dhabi Investment Authority (ADIA) in less than seven weeks. Jio Platforms had raised its last funding from ADIA at an equity value of INR 4.91 Lakh Cr and an enterprise value of INR 5.16 Lakh Cr. 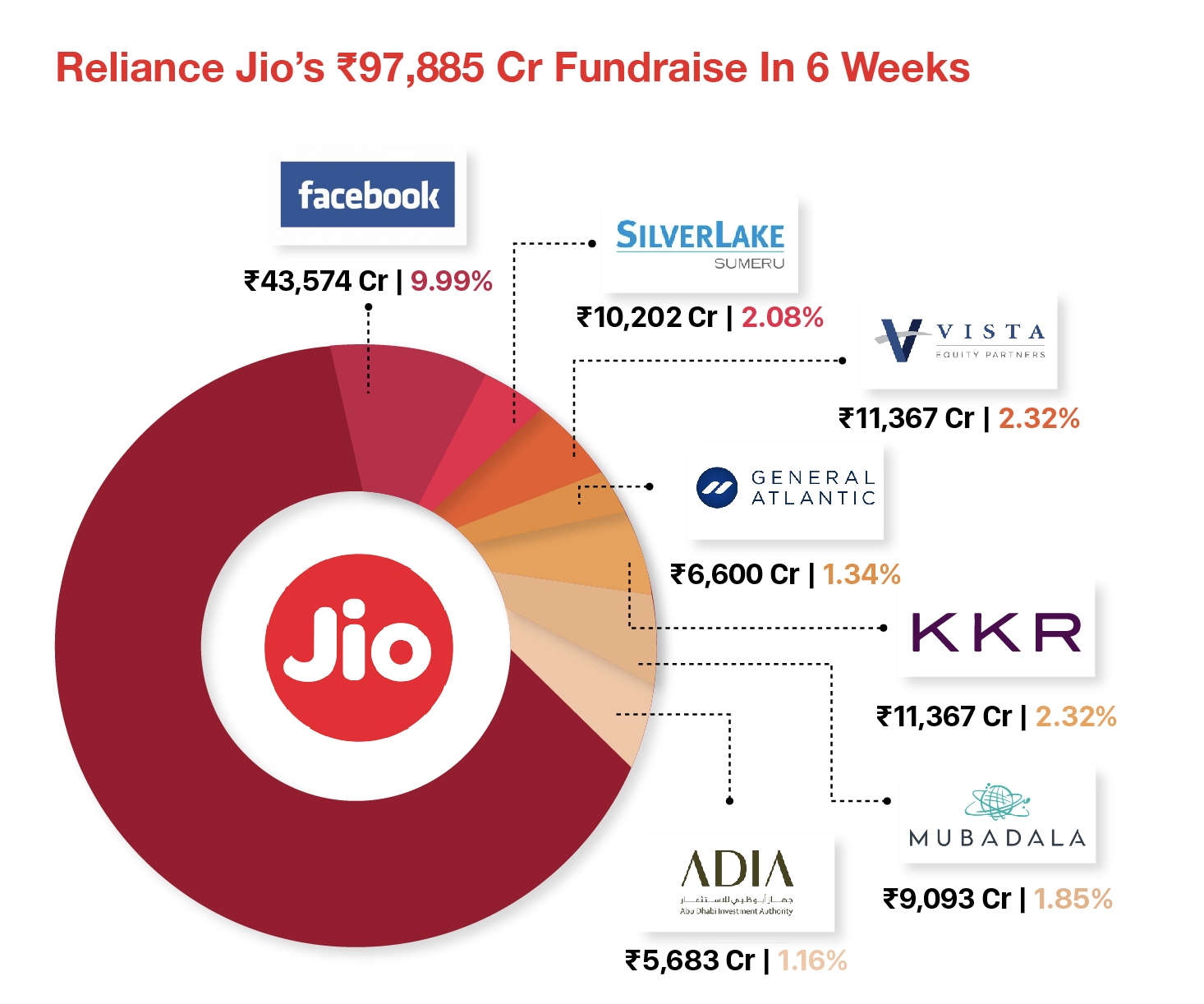 While Google is said to have been in talks with Reliance from around the same time as Facebook, it is also said to be interested in acquiring a 5% stake in Vodafone Idea, so it could very well be that Jio is not looking for another tech giant as a partner currently. Secondly, the if Google is in talks with Vodafone Idea for a deal, it may already have passed on Jio as a potential investment in the Indian telecom market. It must be noted that having stakes in two of the three private telecom players might not sit well with the Competition Commission Of India.

What Google Brings To The Jio Table

With its hands in pretty much every tech sector, Google would be one of the ideal partners for Reliance Jio’s long-term vision of digital India.

Founded by Larry Page and Sergey Brin in 1998, Google has a dominant position in online video (YouTube), email (Gmail), search, smartphone OS (Android) and web browser (Chrome), and it’s also a critical part of the global cybersecurity infrastructure through various sub-groups within the company, and enjoys a prominent position in the digital advertising space, along with Facebook.

When one considers the massive adoption for Google’s tech ecosystem in India in recent years, Jio has played a major part in that growth thanks to the penetration of its 4G services. This has not only helped push Android deeper into the country, but has brought more users to Google search and YouTube, even from rural India.

Joining hands with Jio would just formalise this already successful partnership and make Google a more critical part of the Indian tech industry. Even though Google has had presence in the Indian market for nearly two decades, it’s yet to be seen as an Indian company and in recent times, with the greater focus on data localisation and adoption of Indian technology, Google could use a boost in its image. Backing Jio with capital might just make it easier in that regard.

What Microsoft Brings To The Jio Table

A veteran in the tech industry — at least in comparison to Google — Microsoft, founded in 1975, already has close ties with Reliance Jio. Like Google, Microsoft has a play in nearly every sector with the PC ecosystem being its strongest suit along with the Microsoft Azure cloud platform.

But unlike Google, Microsoft is a key player in the gaming market. While Google is taking baby steps with Stadia, Microsoft’s Xbox ecosystem is one of the most sophisticated gaming platforms in the world.

Microsoft and Reliance had formulated a partnership in August 2019 to offer free Reliance Jio connectivity and Microsoft Azure cloud services to tech startups and small and medium businesses in India by 2021. The partnership was aimed to accelerate the digitisation of the Indian economy and drive the adoption of cloud-based services among businesses.

At the time, Reliance had said that it would offer Microsoft Office 365 productivity suite and email exchange server support to startups. Besides this, the company said it would build new custom solutions on Microsoft Azure for large enterprises as well in advanced technologies such as data analytics, AI, cognitive services, blockchain, IoT and edge computing.

One of the biggest factors behind any potential deal with Reliance Jio for Microsoft or Google has to be the Facebook factor. In April 2020, Facebook became the largest external shareholder in Jio Platforms by acquiring a 9.99% stake for $5.7 Bn, second only to Reliance Industries. This deal has not really gone well with industry stakeholders, who have been asking Competition Commision of India’s (CCIs) intervention to make this deal more competition friendly.

The private players and government officials believe that the Facebook-Jio deal will give the two entities an “unfair advantage” and help them take over even other big players like Amazon and Google. One of the reasons behind this dissatisfaction is the amount of data both Reliance’s Jio Platforms and Facebook own.

Even Justice BN Srikrishna, chief architect of the personal data protection draft framework, was skeptical about the lack of a data regulator to oversee privacy concerns emanating from Reliance Jio-Facebook deal, adding that the deal went through due to the lack of a data privacy law in India. 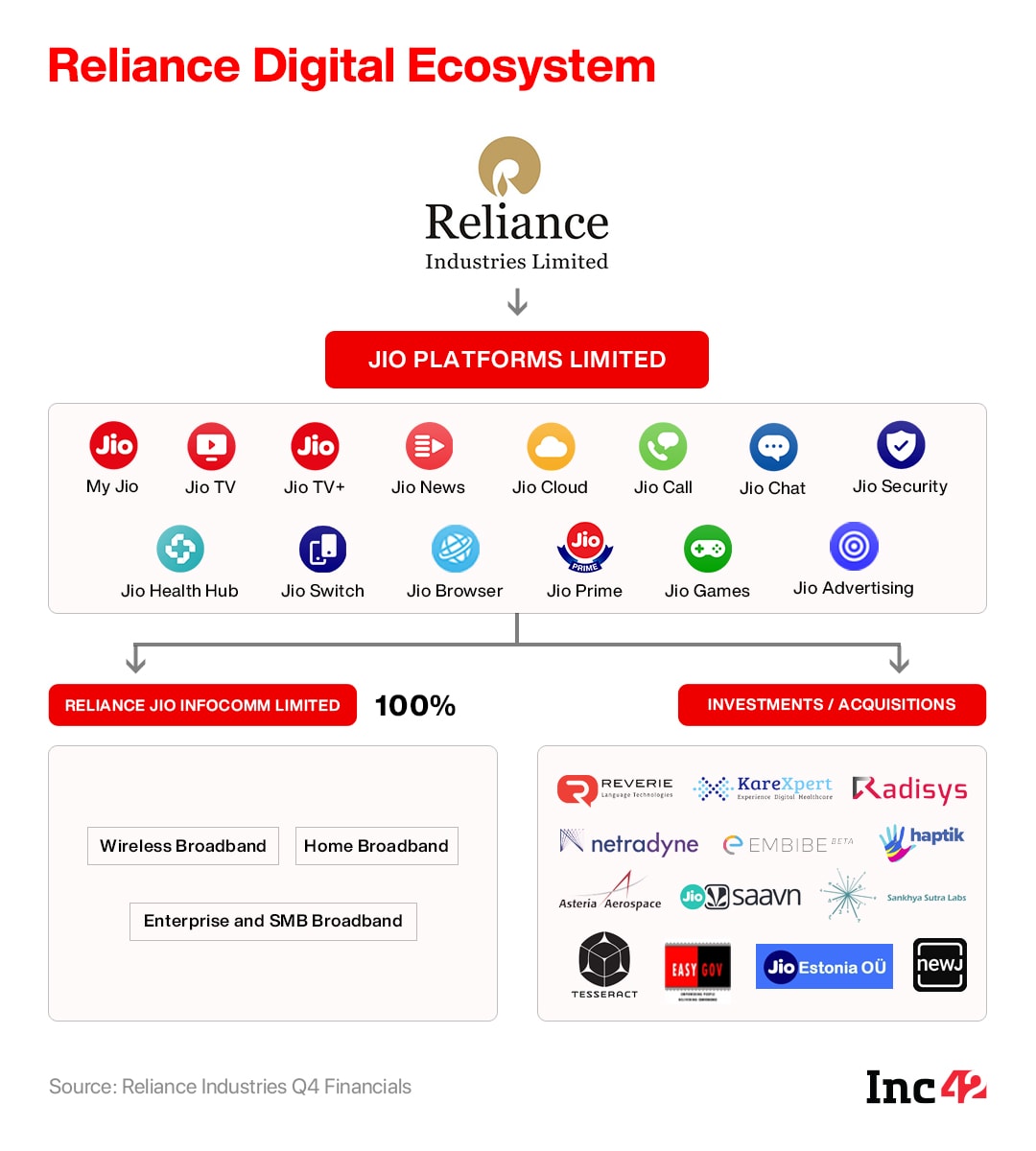 No matter who Reliance Jio chooses to partner with — Microsoft or Google — similar concerns may be raised again, considering the dominant positions, the two companies have in their respective segments. Besides this, the deal also comes at a time when CCI has taken up the market study of the Indian telecom segment. Through this study, the competition watchdog is looking to  bolster capabilities to deal with unfair business ways.

The study will also explore change in competition strategies with the adoption of new technology, along with analysing the concentration and the impact on competition of regulatory/policy developments. It will also focus on vertical integration between access and content services, watchdog’s Chairperson Ashok Kumar Gupta added.

Previously, CCI had carried out a detailed market study on ecommerce to understand the market trends, distribution methods and strategies.After this,it had rolled out several self-regulatory practices for the sector as well. Looking at this, there is a possibility that the department will take up a similar approach in the telecom sector, given how much is at stake considering Reliance Jio’s market leader position.