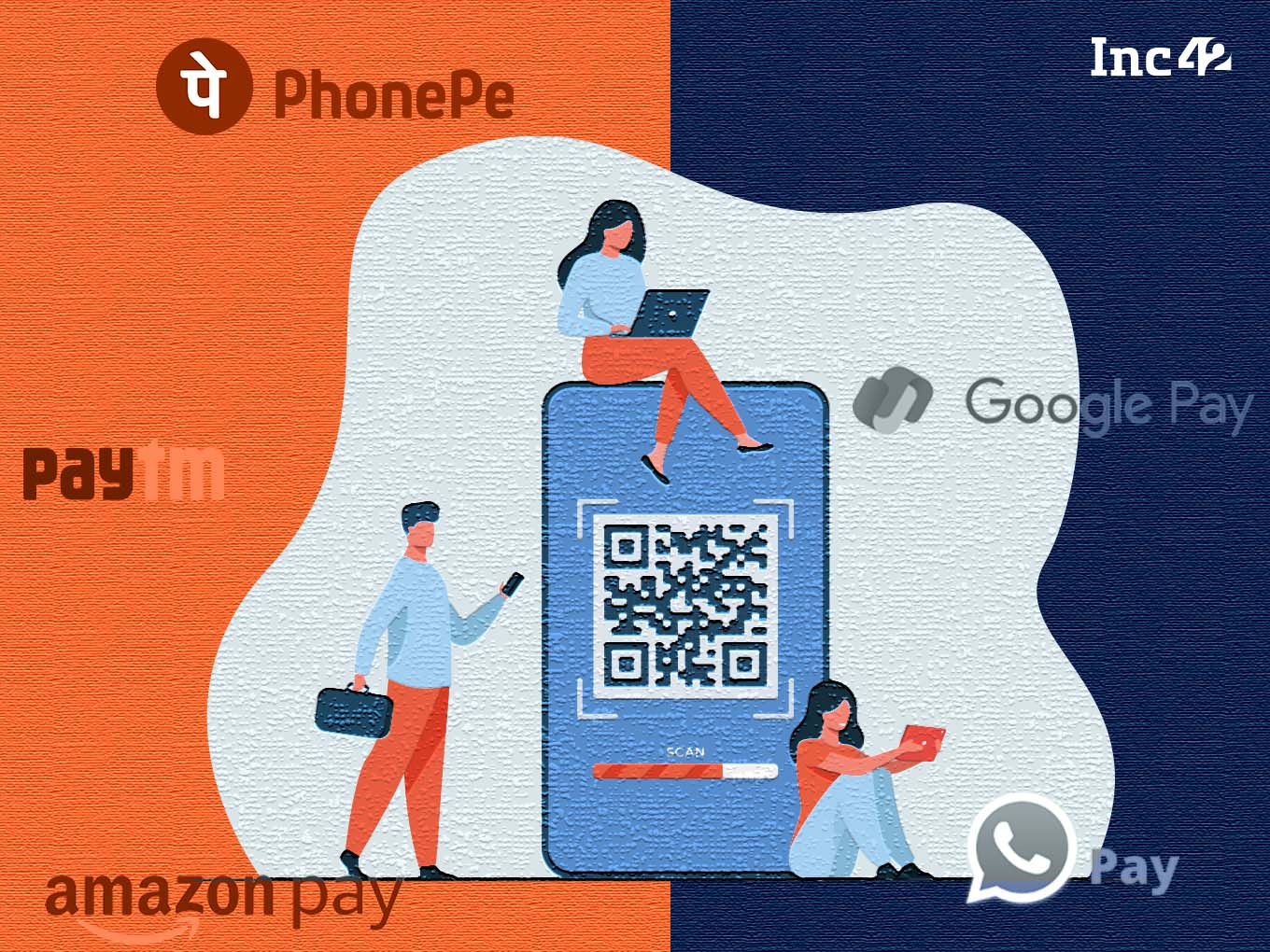 WhatsApp’s overall transaction value rose marginally, but the overall UPI share was a mere 0.02% with 23.4 Lakh transactions worth INR 205 Cr

The app-wise performance has not changed either, and only recorded an average single-digit growth month-on-month. PhonePe led the UPI numbers with INR 4.05 Lakh Cr transactions. Google Pay maintained its second lead, with transaction value falling to worth INR 2.98 Lakh Cr.

Interestingly, while PhonePe’s share in transaction counts remained the same for January 2022, transaction volume share rose to 48.7%. Further, in 2021, the startup claimed to have crossed the 350 Mn registered user mark, clocking a 28% average month-on-month growth from January to December 2021. 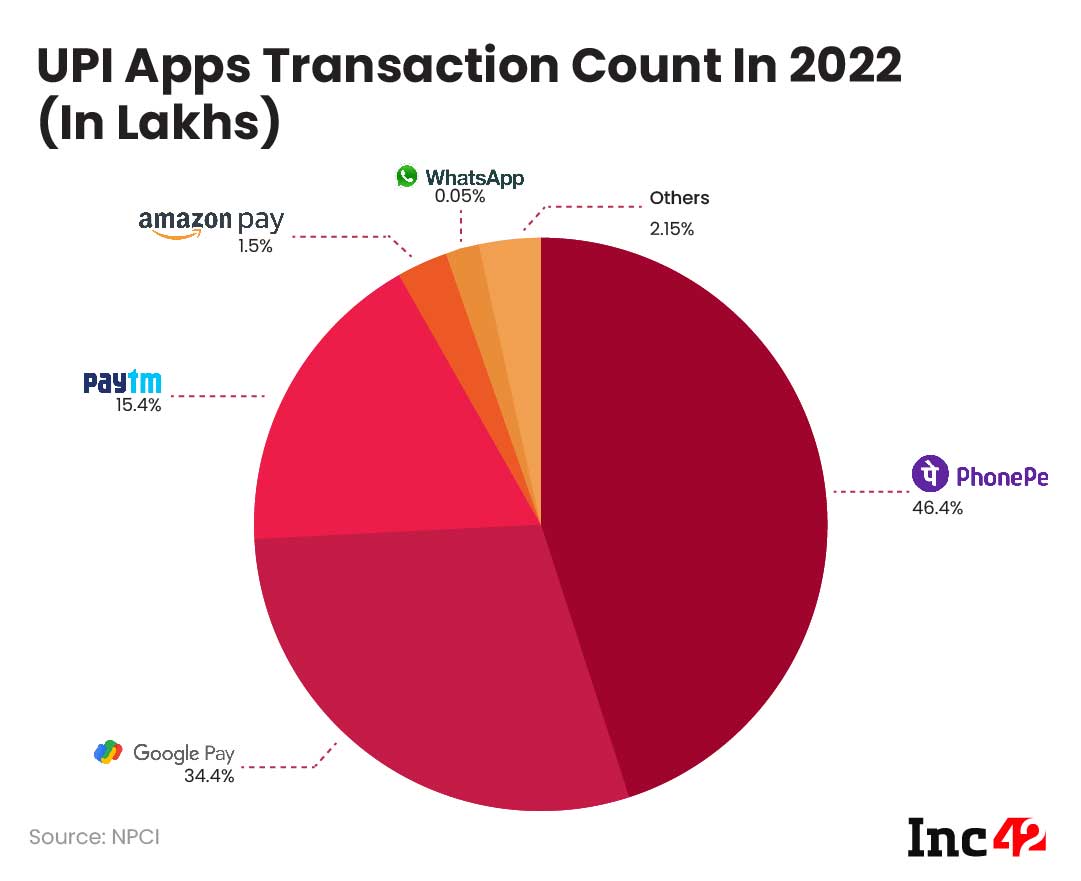 Google Pay’s market share, only second in line after PhonePe, fell from 37.5% to 34.4%. While traditionally a fall in the market share is not a good sign for any company, but this may be good news for the US-based tech giant’s fintech arm.

NPCI’s guideline had asked the third-party app providers (TPAP) to cap their transaction value at 30% by December 2023 — i.e PhonePe and Google Pay need to rescue their market share. 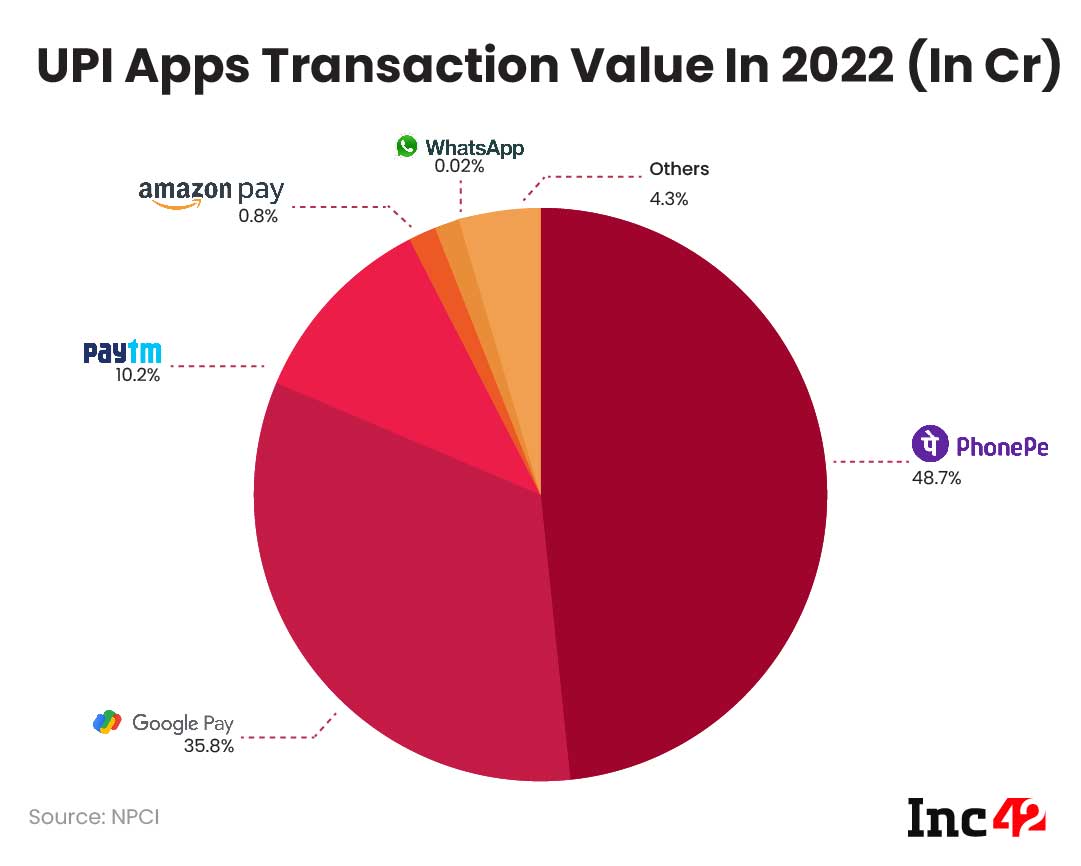 The TPAP guidelines, aimed to prevent oligopoly and promote competition, is also one of the reasons why WhatsApp has only 0.02% UPI market share. NPCI has disallowed WhatsApp from leveraging its payments platform to more than 500 Mn (50 Cr) users in the country.

To restrain WhatsApp from undermining the competition and creating a monopoly, its initial rollout was limited to 20 Mn users. But in relief of the Meta-owned WhatsApp Pay, NPCI has recently allowed it to double the number of users on its payment platform in India to 40 Mn users.

In January 2022, WhatsApp recorded 23.4 Lakh transactions worth INR 205 Cr — a 9% month-on-month growth (highest among the five players mentioned in the article).

UPI is currently the most popular digital payments system in India, with more than 282 banks linked to it. The State Bank of India (SBI) was leading the segment by processing about 129 Cr UPI transactions, as of December 2021.

The UPI Scenario In India

India’s digital economy has flourished over the past few years. Inarguably, UPI’s success story has been a key instrument in the ‘Digital India’ initiative, with the homegrown payment gateway gaining success even overseas.

Last year, the RBI also announced bringing UPI on feature phones. The central bank observed that around 74 Cr mobile phone users have smartphones in the country out of the total 118 Cr mobile users. The feature phone support for UPI could be more critical to UPI’s growth story as well as financial inclusion and digital penetration.

Not only that, RBI has maintained that 50% of the transactions through UPI were below INR 200, thus, a framework to enable small value digital payments in offline mode has been issued. Users will now be able to make small transactions (within INR 200) offline (without the use of internet or telecom connectivity) using channels or instruments such as cards, wallets and mobile devices in a UPI app.

It is aimed to conserve banks’ system resources, without any change in the transaction experience for the user — quite similar to a wallet system that Paytm, Amazon Pay and PhonePe offer.

As per a report by ACI Worldwide, India retained the top spot in terms of digital transactions worldwide with 25.5 Bn real-time payments transactions, followed by China.

And now, besides growing in India, UPI is set to debut overseas as well in countries such as the UAE, Bhutan, the USA, Japan, China, the UK, Singapore among others.

“This will be helpful, especially for farmers and senior citizens in rural areas, enabling interoperability and financial inclusion,” she said in her Budget speech.

To boost the adoption of digital banking services further, Sitharaman said that to mark 75 years of India’s independence, 75 digital banking units in districts will be set up by scheduled commercial banks.

However, it is yet unclear what such a digital banking unit will entail. Coupled with the digitalisation of post-office-run banking services, it is a clear sign that the government is looking to push digital banking in rural and semi-urban India.

The government will also look to boost the overall fintech ecosystem by promoting the use of payments platforms that are economical and user-friendly.

To further the digital payment ecosystem, under an incentive scheme for the promotion of RuPay debit cards and low-value BHIM UPI transactions, the govt will incentivise the banks by paying a percentage of the transaction value for FY22. For this, the govt has set aside a budget of INR 1,300 Cr.