ZO Rooms’ parent Zostel Hospitality has approached the Delhi High Court (HC) to restrain it from modifying its shareholding structure or cap table including by way of an IPO, say reports

The matter was taken up on Wednesday (September 29th) in Delhi High Court (HC) before Justice C. Harishankar and is now adjourned to October 7th

OYO also hit out at its rival Zostel and called alleged that this is an attempt to overreach an ongoing Delhi HC proceedings by issuing statements to the media before the hearing. 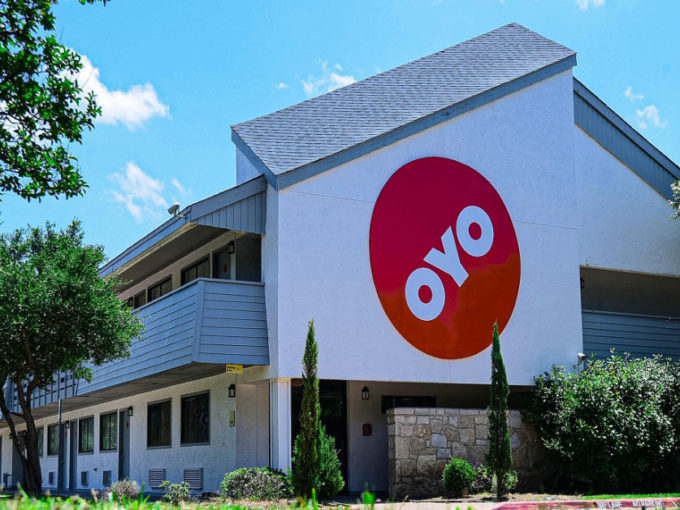 Hospitality unicorn OYO has hit back at its rival Zostel for allegedly attempting to misrepresent facts in an ongoing dispute over a failed merger between both companies.

In a statement, OYO said that Zostel attempted to “overreach” an ongoing Delhi HC proceedings by issuing statements to the media before the hearing.

“After multiple attempts in the courts and arbitration tribunal, Zostel’s communication shows unnecessary and repetitive efforts to create a wrong perception. This shows a pattern of Zostel trying to distract OYO from pursuing its business goals. OYO is willing to utilise the resources in law to protect its interests,” OYO added in its statement.

The three-year-old long-standing dispute between OYO and Zostel (ZO Rooms) had taken a fresh turn today in Delhi High Court (September 29th) after Zo Rooms approached the court with a fresh appeal that sought to restrain OYO from modifying its shareholding structure for its upcoming IPO.

The matter was taken up in Delhi High Court (HC) before Justice C. Harishankar. Prior to this, a tribunal court in March 2021 had partially allowed Zo Rooms to execute a prior term sheet that it had struck with OYO in 2015.


During the hearing in Delhi HC on Wednesday, Amit Sibal, the counsel for Zo Rooms requested the court to reserve its 7% disputed stake in OYO in escrow since OYO is expected to file its draft red herring prospectus next week.

Zo Rooms’ counsel Sibal said that his client wouldn’t be able to redeem its disputed holding in OYO if in case the budget hospitality unicorn turns into a public company, according to a Moneycontrol report on Wednesday.

This comes two weeks after OYO converted itself into a public company and increased its authorised capital share capital from existing INR 1.17 Cr to INR 901 Cr.

“Now if they go ahead and conduct the initial public offering then these shares will be no longer available for allotment to me in that eventuality. Therefore I was seeking that there be protection that if I succeed and they do not succeed in their objections to the award then at least my ability to have those shares is preserved…I am not here wanting to stop an IPO, but only to preserve the 7 % share,” Sibal reportedly said in court.

The Delhi court, however, adjourned the hearing to October 7th, and hence a final judgement is yet to be pronounced.

“The Award does not provide any relief that entitles them to seek to freeze OYO’s shareholding pattern, in any manner whatsoever…Without considering the grounds of challenge by OYO of the Award, the Award in itself has not issued Zostel or any of its shareholders any shares in OYO. The only relief, apart from costs, which has been granted to Zostel, is to initiate “appropriate proceedings” to execute Definitive Agreements and seek specific performance of the Term Sheet.
“As such, till the time that parties do not come to an agreement on the terms of the Definitive Agreements and the same are not executed, no right whatsoever arises in favour of any party for any type of shares to be issued in OYO,” added the OYO counsel in the recent statement.


What The Tribunal Court Award To Zo Rooms States

In March 2021, after Zo Rooms (owned by Zostel) was issued a partial relief by tribunal court, Zostel had sent press releases claiming that the arbitral tribunal had directed OYO to issue 7% shareholding to Zostel (ZO Rooms) founders and execute the term sheet agreements. However, OYO has stated that the tribunal has not awarded any such claim to Zostel. 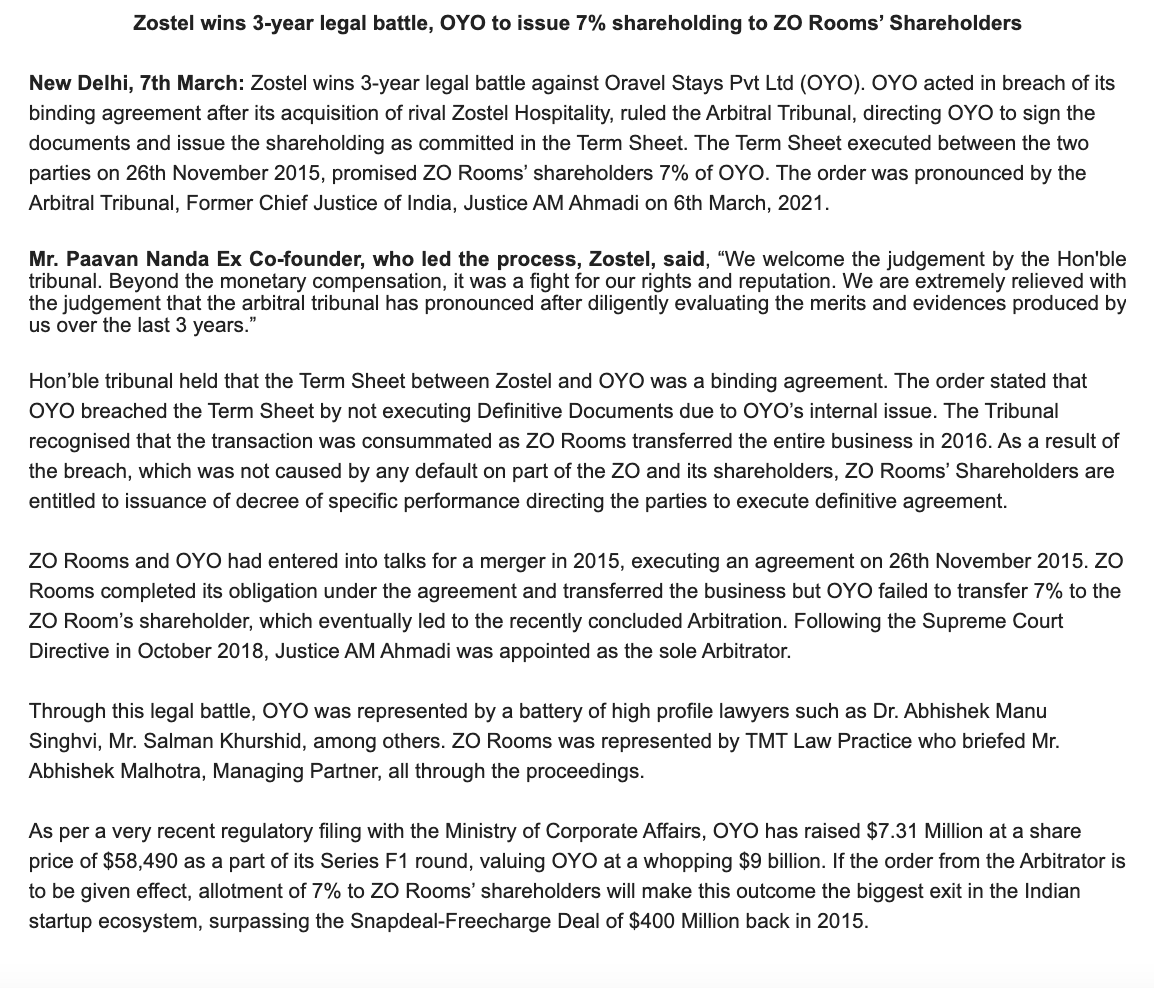 At that time Inc42 had reviewed the March 2021 award by the tribunal headed by Justice Ahmadi, former Chief Justice of India. It stated that Zostel cannot claim the compensation of $1 Mn as relief at this time. It also denied relief for Zostel’s claims about the loss of goodwill because of the fallout of talks with OYO, which recently raised money at a $9 Bn valuation.

How The OYO VS Zostel Battle Began

In 2015, SoftBank-backed OYO had taken Tiger Global-backed ZO Rooms to court over alleged theft of its copyright material. However, the Delhi High Court on April 21, 2015 had issued a stay order against ZO Rooms then. Despite that legal battle, in late 2015, OYO was reported to have explored a potential acquisition of ZO Rooms. However, after more than two years of speculation, the merger fell flat in 2018.

Soon after the potential merger talks failed, Gurugram-based OYO filed a complaint against Zostel Hospitality alleging continuous inconvenience and harassment by Zostel founders. OYO filed a criminal complaint against the founders of Zostel on January 16, 2018, under Section 405, 406, 415, 420, 425 and 426 pertaining to criminal breach of trust, cheating and misrepresentation of data, said the company in a statement.

Zostel in a separate petition filed on February 2, 2018, alleged that OYO had acquired its data of employees, assets, hotel properties under the pretext of accelerating the process of acquisition and is now refusing to pay the dues for the business acquired. OYO alleged that this was misconceived and baseless.

“These allegations relate to a long expired and non-binding term sheet. It is absolutely false to suggest that OYO benefited from talks of the deal since the Zo business had been faltering at that stage. There was also no response to a list of issues identified during our diligence process, including significant liabilities and unpaid dues as well as undisclosed contingent liabilities,” OYO said at the time.

OYO also alleged that it had been inconvenienced and harassed by Zostel and its directors, and claimed Zostel was “intimidating and pressuring us to submit to their unreasonable demands.”