The NRAI accused both Swiggy and Zomato of hurting small and medium restaurateurs, with many having to shut shop  ‘due to onerous terms’ imposed on them.

In its submission to the CCI the restaurant advocacy group raised multiple issues faced by the industry including deep discounting and exorbitant commissions charged by aggregators.

Interestingly, NRAI’s complaint to the CCI comes at a time when Zomato has been gearing up for a multi-billion dollar domestic IPO. 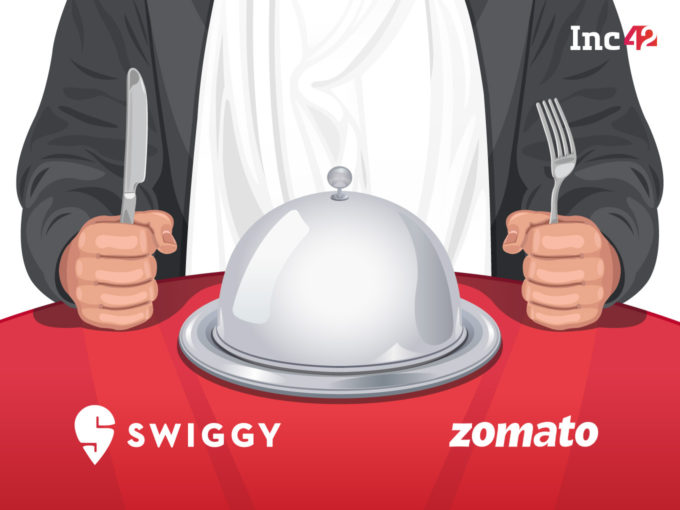 The restaurant advocacy group said in a statement on July 5 that during the pandemic, the ‘magnitude of anti-competitive practices’ of Zomato & Swiggy has increased manifold despite NRAI’s numerous discussions with the aggregators.

The NRAI statement also accused both aggregators of hurting small and medium restaurateurs, with many having to shut shop  ‘due to onerous terms’ imposed on them.

In its submission to the CCI on July 1, 2021, the restaurant advocacy group raised multiple issues faced by the industry including deep discounting and exorbitant commissions charged by Swiggy and Zomato.

In summary, the NRAI has highlighted the following practices by Zomato & Swiggy which the group claims has ‘appreciable adverse effect on competition’:

Speaking on this, Anurag Katriar, President of NRAI said that the advocacy group has been in constant dialogue with the food delivery aggregators over the last 15-18 months to resolve critical issues impacting the sector. However, Katiar added that despite their efforts, the group has not been able to resolve them with the aggregators.

“The needle hasn’t moved much on these issues. We have therefore approached the CCI now to look into the matter and investigate them thoroughly. We are committed to the cause of our partners, and we will put our best efforts with the CCI to ensure that the practices of these marketplace platforms are aligned to the benefit of the entire F&B industry,” NRAI’s Katiar added in a statement on July 5.

Interestingly, NRAI’s complaint to the CCI comes at a time when the foodtech sector has benefited immensely from the pandemic with order volumes aggregating to around 2-2.5 Mn daily orders a month. Piggybacking on this growth, 12-year old startup Zomato is also gearing up for an INR 8,250 Cr ($1.1 Bn) initial public offering (IPO) this year. Zomato’s upcoming IPO is one of the most closely watched public offering in the consumer Internet ecosystem in India.

However, this isn’t the first instance of the restaurant industry raising competition issues with Swiggy and Zomato. Recently, the NRAI has been spearheading the ‘Order Direct’ campaign which has been encouraging users to order directly from the restaurant’s own direct order page rather than depending on Swiggy and Zomato.  Inc42 had earlier written in-depth about how many branded restaurant chains are now challenging the status quo of the aggregators by setting up their ordering platforms and food delivery operations.

Apart from this, The NRAI along with the Federation of Hotel and Restaurant Association of India (FHRAI) had earlier initiated a massive ‘logout’ campaign against Zomato Gold subscription programme in late 2019 which encouraged restaurant brands to band together and log out of Zomato’s discovery platform.

Growing Number of Of Legal Cases Against Internet Companies


It is important to note that recently there have been multiple complaints against various Internet startups and ecommerce companies in the CCI and other tribunal courts.

The competition regulator is currently investigating online travel firm MakeMyTrip (MMT) for allegedly violating competition regulations. The CCI was acting on complaints from branded hotel chains Fab Hotels and Treebo which accused MakeMyTrip and OYO of indulging in anti-competitive agreements and forcibly delisting them out of MMT, which is the market leader in India’s OTA space.

After a year-long probe into the complaints, CCI had held that MMT in fact may have indulged in discriminatory practices by delisting the budget hotel chains back in 2018. The CCI also found that FabHotel and Treebo were in fact competitors to OYO Rooms, and by forcibly delisting the former brands, MMT disrupted fair competition in the market.

Apart from this, an independent online sellers body had also recently filed an antitrust case against Amazon and Flipkart with the CCI, accusing them of anti-competitive practices through preferential treatment of brands and seller entities, particularly Cloudtail. In January 2020, a complaint filed by the Delhi Vyapar Mahasangh with CCI, alleged that there are instances of several vertical agreements between Flipkart with their preferred sellers on the platform and Amazon with their preferred sellers, respectively which have led to the foreclosure of other non-preferred traders or sellers from these online marketplaces.