Fundamentum Will Look To Invest Upto $25 Mn in Series B, Series C Rounds Of Tech Startups 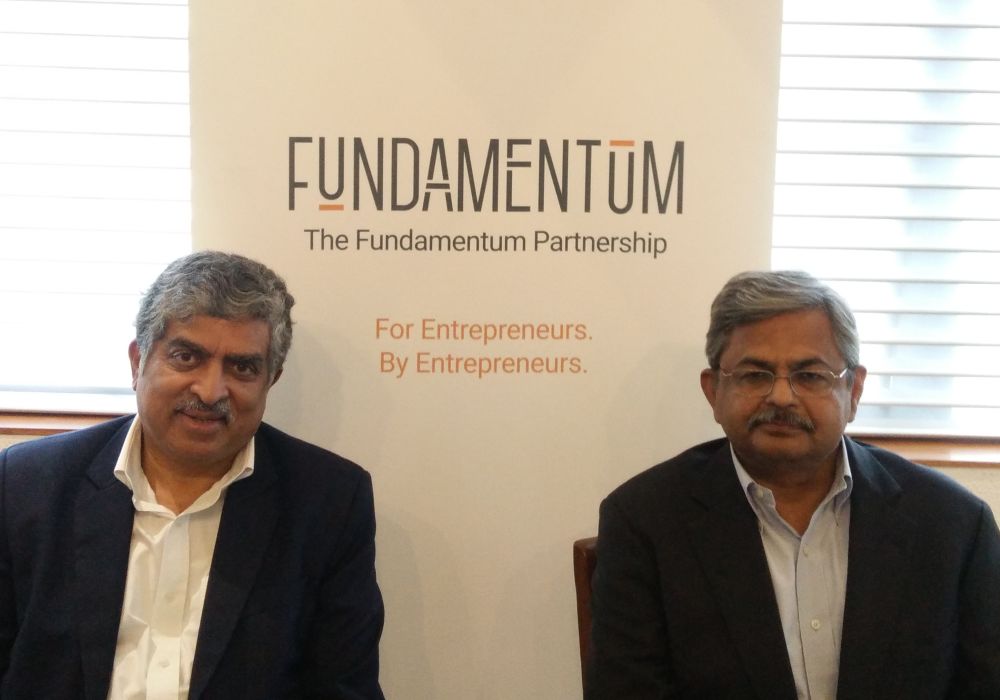 Former Infosys CEO, Nandan Nilekani and Helion Ventures founder Sanjeev Aggarwal have joined forces to launch a new scale up platform – the Fundamentum Partnership. Fundamentum will have an initial corpus of $100 Mn which can be extended to $200 Mn in future.

With this move, Sanjeev Aggarwal will continue to operate Helion Ventures along with the remaining co-founders, while also working on Fundamentum. Whereas, Nandan Nilekani claimed that he will freeze direct investment in startups going forward. All funding from here on out will be made through the Fundamentum Partnership Fund.

Fundamentum aims to invest in consumer technology businesses, particularly ventures that are solving unique Indian problems, according to an official statement. The platform looks to lead investment rounds with a ticket size from $10 Mn to $25 Mn in early to growth-stage startups. The Series B or Series C investments will be done in startups that have achieved PMF (Product Market Fit). Fundamentum also looks to invest capital in enterprise technology and outsourcing companies with global clients.

Commenting on the launch, Nandan Nilekani said, “I have thoroughly enjoyed looking at how Indian entrepreneurs identify original Indian problems and then solve these with the application of technology. India continues to be blessed with phenomenal entrepreneurial talent and the attempt with this platform will be to see how we can amplify their success. At Fundamentum, we are committed to building companies to last, with speed and at scale.”

Both co-founders Nandani Nilekani and Sanjeev Aggarwal will mentor startups without charging a management fee as per an official statement. Fundamentum will also not be apply carried interest from the invested portfolio.

Talking about the need to build a ‘scale up platform,’ Sanjay Aggarwal said, “While India has earned recognition as a startup nation, it is as yet an unproven scale up nation. 10 years ago, with Helion, the attempt was to participate in creating a ‘startup’ ecosystem in India and now with Fundamentum we want to help build a much needed ‘scale up’ ecosystem in the country.”

Nandan Nilekani is well-known in Indian and global business circles. After co-founding Infosys and being the CEO, Nilekani became the Chairman of UIDAI. The UIDAI is a government initiative to provide a biometric identification system called Aadhaar to 1.3 Bn Indians and counting. Aadhaar is a key pillar of the India Stack and part of the Digital India Initiative. Nilekani also chairs EkStep an NGO that uses technology to increase learning opportunities for children.

On the investment front, Nandan Nilekani has backed startups in a diverse range of sectors. In May 2017 alone, Nilekani backed 4tigo and The Print. Nilekani was part of multimillion funding rounds for the same. In August 2016, it was reported that Ratan Tata, Vijay Kelkar, and Nilekani had joined hands to launch a microfinance company called Avanti Finance. Nilekani’s other investments include names such as ShopX, RailYatri (co-investment with Helion), angel investment platform LetsVenture, Sedemac (an innovative leader in automotive electronics) and Power2SME (a B2B marketplace).

Sanjeev has about three decades of experience in business, technology and investment. After successfully exiting his first venture Daksh, Sanjeev co-founded Helion Venture Partners in 2006. It is based out of Mauritius. It is an India-focussed fund with a portfolio across consumer tech, healthtech, ecommerce, retail, SaaS sectors. Some of the more prominent investments that the firm has made under his purview are – LivSpace’s $15 Mn funding, Amba (Moody’s), Axtria, Azure (AZRE), Bigbasket, MakeMyTrip (MMYT), Whatfix and UnitedLex. Recently, Helion Ventures successfully exited Today’s Health Care after pouring in $3.9 Mn for a 40% stake.

Nandan Nilekani and Sanjeev Aggarwal-backed Fundamentum is a new entrant in the Indian startup ecosystem, backed by industry veterans. Other big ticket India-focussed funds introduced include Sequoia Capital that raised about $4 Bn for a fresh fund, of which $700 Mn was raised for the Indian market alone. Honeywell Ventures Fund is yet another startup focussed VC fund that was launched in May 2017.