From New Launches To Jio’s Plans, Here’s What To Expect From Mukesh Ambani During Reliance’s 43rd AGM

From New Launches To Jio’s Plans, Here’s What To Expect From Mukesh Ambani During Reliance’s 43rd AGM 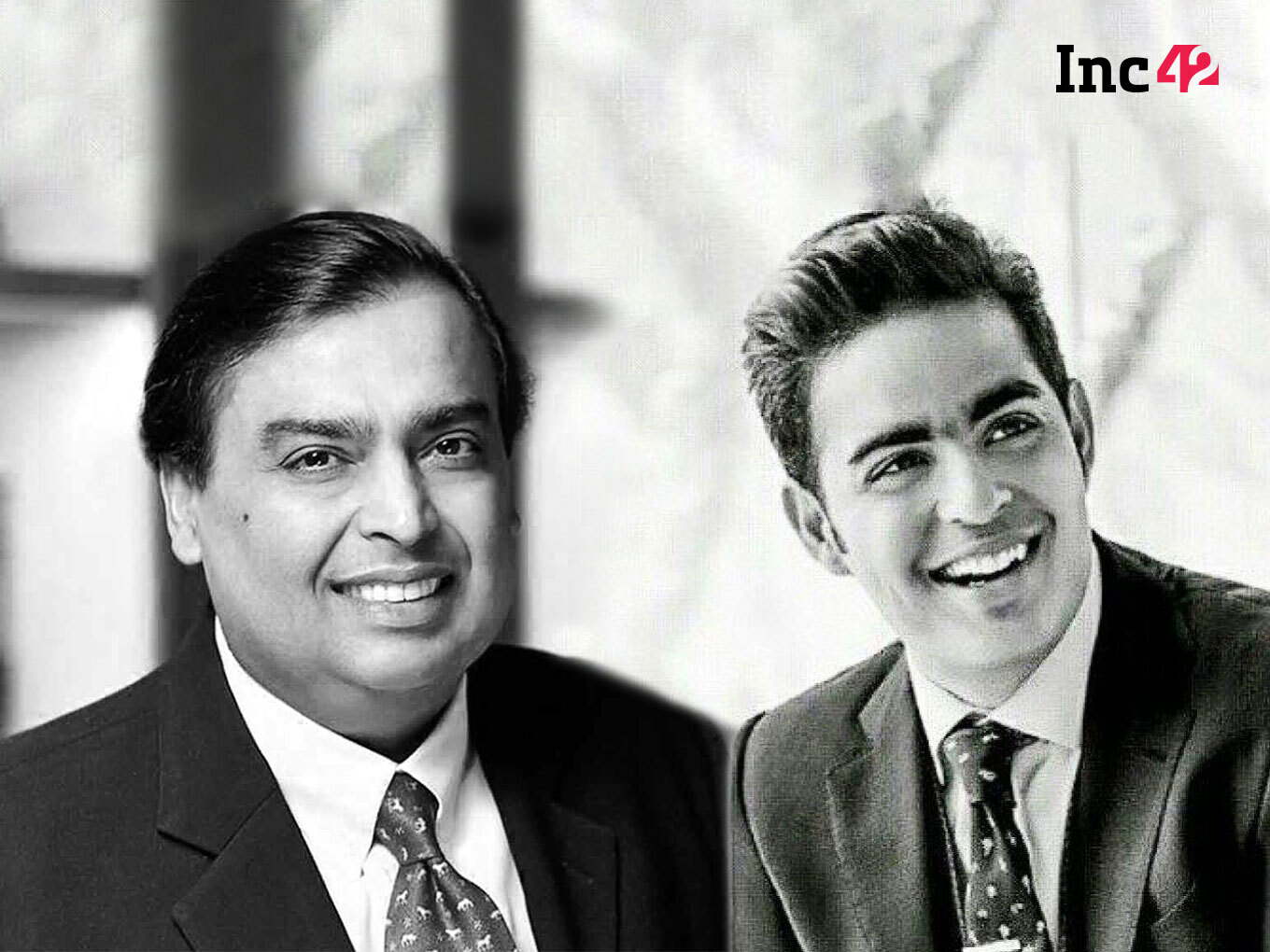 Reliance may finally announce its latest fintech and agritech venture

India’s most valuable company Reliance Industries is hosting its first virtual annual general meeting (AGM) on Wednesday (July 15) and this time it has a lot more to offer than before.

Reliance’s AGM has always been a sought after event in the business world, but this time it’s special because of the series of deals Reliance Industries has stuck since the last meeting in August 2019.

Not only has RIL Chairman and Managing Director Mukesh Ambani managed to turn Reliance net-debt free nine months before its deadline, he has also catapulted his way to become the sixth richest man in the world with $72.4 Bn, surpassing Tesla’s Elon Musk and Alphabet cofounders Sergey Brin and Larry Page. The company has raised a massive funding streak through its digital venture Jio Platforms, which has companies like Reliance Jio, MyJio, JioTV, JioCinema, JioNews, JioSaavn and, now, JioMeet along with other services.

The event will be hosted on JioMeet, its brand-new virtual platform, that will allow more than 1 Lakh shareholders from 500 locations simultaneously.

To make the onboarding of shareholders simpler, Reliance has also set up an educational WhatsApp chatbot on 7977111111. The ChatBot, developed by Reliance’s subsidiary Haptik, has been designed to handle diverse sets of queries from the large number of shareholders, other interested stakeholders and general public from across the country.

Google Or Microsoft May Finally Jump In

Arjun Yash Mahajan, head of institutional business at Reliance Securities has told Financial Express that Microsoft and Google may acquire 5% to 10% stake in Jio Platforms. Reliance Industries may announce this fundraise at the AGM, he noted. According to media reports doing rounds, Reliance Industries had been in talks with Google and Microsoft for fundraising.

Both the tech giants were willing to acquire 6% of the Jio Platforms, but it did not make business sense for Reliance to give up so much of its business. Therefore, Reliance Industries was looking to accommodate only one of these players. Read how these deals may help out Reliance Jio at Inc42.

Leveraging on this network and a user base of 388 Mn on its Reliance Jio telecom network, the company has raised INR 118,318.45 Cr from leading investors. The last investment in Jio was by Qualcomm Ventures, which picked up a 0.15% equity stake for an investment of INR 730 Cr ($96 Mn) to help Reliance Industries in its Make-In-India 5G venture. So there is more anticipation if Reliance has anything to offer in the 5G domain at today’s AGM.

Last month, Mukesh Ambani-led Reliance Jio also sought the telecom department’s permission to do lab testing of its in-house developed 5G products. Once the permission is granted, the telco would have to undertake the whole testing process on its own, including setting up the test network at its premises since in a lab testing, no third-party is involved. 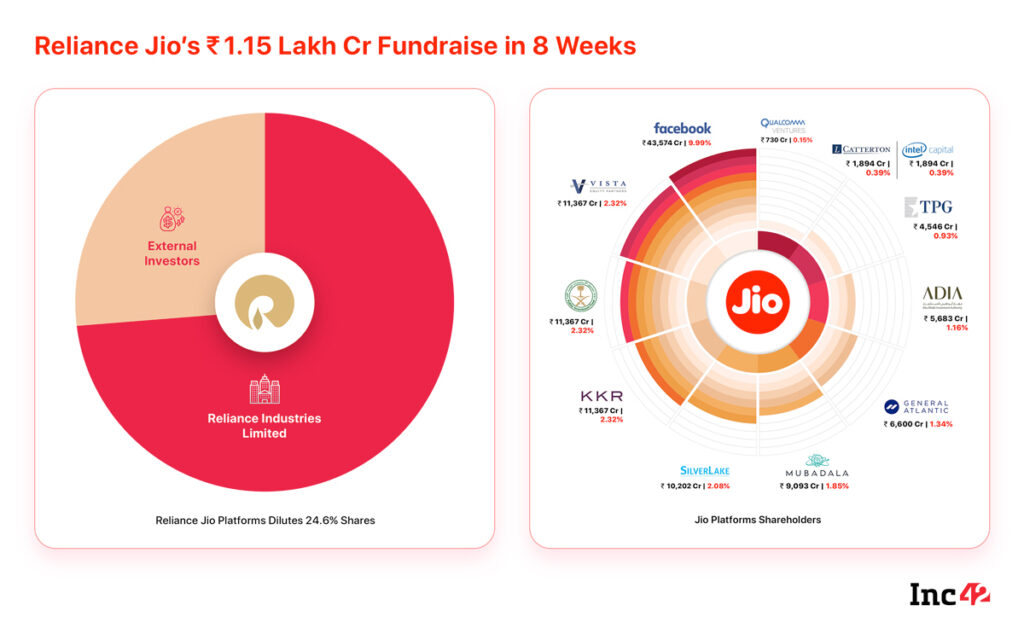 Reliance Industries may finally announce the acquisition of Kishore Biyani’s Future Retail, which has more than 1,500 stores across 437 Indian cities and towns, at AGM. Food accounts for a major chunk of sales in Future Retail’s flagship Big Bazaar. According to an Economic Times report citing sources, Reliance had been in talks to acquire 30% stake in Future Retail for INR 6K Cr and refinancing part of the borrowings for a further tenure of 5-7 years.

It has been reported that Biyani, who was once the poster boy of the country’s India’s retail sector, has been compelled to look out for a buyer due to the mounting debt. Furthermore, Future Group companies did not repay banks debts nearly four months ago and the market value of Biyani’s listed companies have dropped to third. After the report was published, shares of Future Retail were hit 5% upper circuit limited while Reliance Industries’ shares climbed 2%.

Agritech, Fintech: All On Reliance’s Platter

Reliance Industries is reportedly planning to introduce new financial services to offer mutual funds and broking insurance products on its Jio platform. With its customer base of 388 Mn and Reliance Retail’s 11,784 stores, the company already has a strong distribution network in place for any products which it plans to launch in the future.

Digital payments app JioMoney will be one of these products. According to a Mint report, the app will be available on MyJio from today (July 15).  RIL also holds a 70% stake in Jio Payments Bank, a joint venture with the State Bank of India (SBI), which is awaiting a formal launch.

Besides this, Reliance Jio will also be banking on its partnership with Facebook to expand into the agritech domain with the JioKrishi app. The JioKrishi app will offer farm-to-fork supply chain support as well as data analytics. Reliance recently launched the JioKrishi app to help farmers undertake precision farming aided by farmland data. The app, which is currently in beta mode, may be formally announced.

Reliance’s farm-to-fork business will focus on ensuring a 12-hour delivery cycle from harvest to the store by sourcing nearly 50% of all vegetables required in retail. This will benefit its existing groceries businesses Reliance Fresh and JioMart, along with other stores.

Besides, it is also being anticipated that Reliance Industries is looking to kick off an acquisition spree in order to spread its wings across all major digital segments. Currently, Reliance operates in the grocery segment with Reliance Fresh and JioMart, clothing and accessories segment with Reliance Trends, ecommerce with Reliance Retail. Besides this, it has also acquired or invested in close to 13 companies across segments. In addition, it has entered the ecommerce space with JioMart to take on Amazon and Flipkart.


Last year, Reliance Industries had announced that Saudi Aramco and RIL had signed a letter of intent for a proposed investment in its oil-to-chemical (O2C) division. Reliance’s chairperson and managing director Mukesh Ambani has said that the deal would fetch $15 Bn for a 20% stake. This year, investors and stakeholders are eagerly awaiting updates on the deal.

The unfolding of Jio Fiber’s story is another announcement stakeholders are looking out for. The service was announced at last year’s AGM across 1,600 cities in India and offered free calling and free internet service. Last year, Reliance had gone all out especially in terms of digital services related announcements. The company had plans to launch a host of services like Holoboard, mixed reality (VR+AR) applications, gaming set-up box and an OTT platform.

According to Mukesh Ambani’s daughter, Isha Ambani, mixed reality (AR+VR) experiences will be available on Jio GigaFiber and can be used for shopping, education and entertainment purposes. It will be great to see what has been an update in this regard.