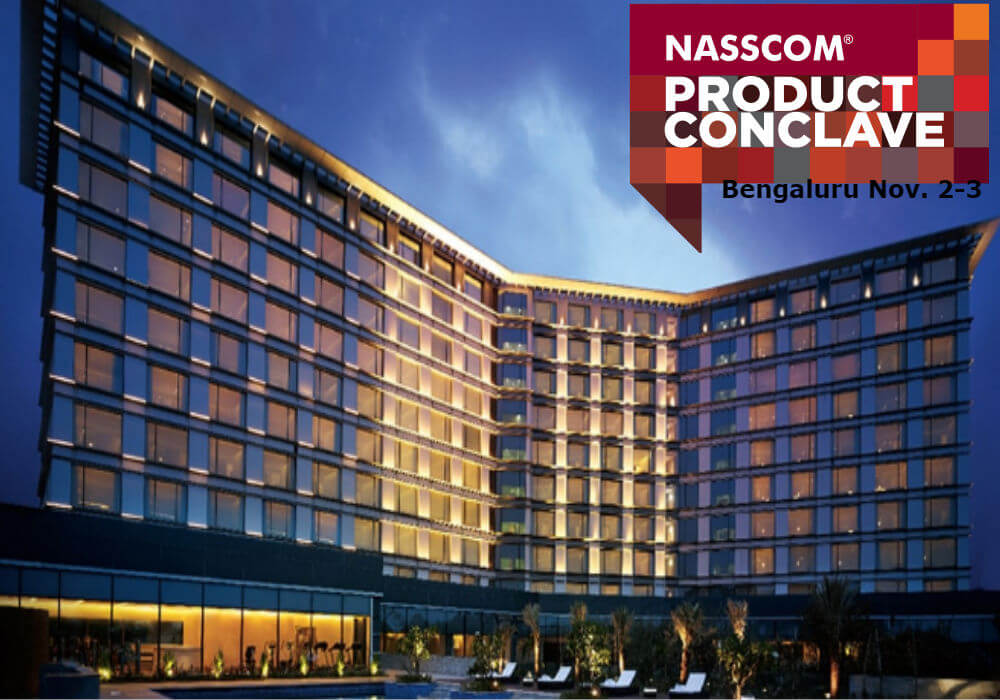 India continues its momentum of being one of the most vibrant landscape for startups, strengthening its position as the third largest startup ecosystem across the world. As per the 2017 edition of the NASSCOM-Zinnov report on the ‘Indian Startup Ecosystem – Traversing the maturity cycle’, the Indian startup ecosystem added over 1000+ tech startups this year, taking the total number of tech startups to 5000-5200. Additionally, the report also pointed out that this rapid rise is coming on the back of B2B tech startup landscape, focused on verticals like healthtech, fintech, and ecommerce/aggregators.

Released on the sidelines of the of the annual flagship NASSCOM Product Conclave 2017 (NPC 2017), the report laid bare the ongoing trends in the Indian startup ecosystem. While Bengaluru, Delhi/NCR and Mumbai retained their top positions as the key startup hubs in India, 20% of the startups emerged from tier II/III cities. 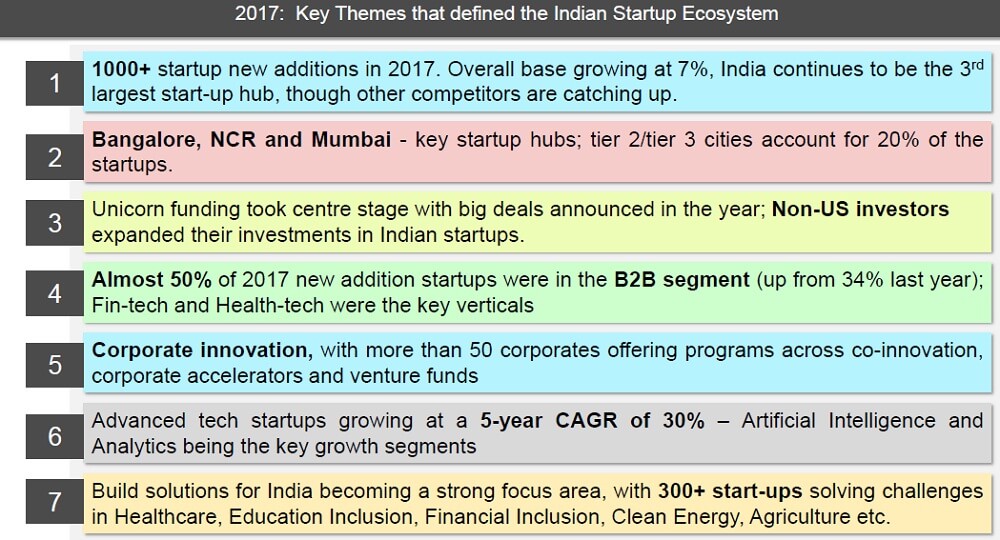 Speaking on the occasion, R Chandrashekhar, President, NASSCOM, stated, “The Indian startup ecosystem is maturing, driven by young, diverse and inclusive entrepreneurial landscape. This is leading to emergence of focused domain solutions for verticals like healthcare, agriculture, and education. Findings of the report are a testimony to the potential of the start-up landscape and the scope of growth and opportunity that India presents. NASSCOM will continue its drive towards catalysing deep tech start-ups, build category leaders and support start-ups to create for India.”

Share Of B2B Startups Rises To 40%; Healthtech, Fintech Startups On The Increase

Almost 47% of new startups set up in 2017 were in the B2B segment, up from 34% last year. Among these, healthtech and fintech and B2B enterprise products were the key verticals. As the tech startups in India rose to 5,200, the total share of B2B startups has risen to 40% in the overall startup base.

However recently as per data from Tracxn, a startup tracker, the number of new start-ups has now dropped steeply for two years in a row, with only 800 startups launched in 2017 so far.

The share of B2B in overall funding also rose to 31% in H1 2017. Also what was noticed was that corporates are playing a vital role in supporting these B2B startups with accelerator/ innovator programs. 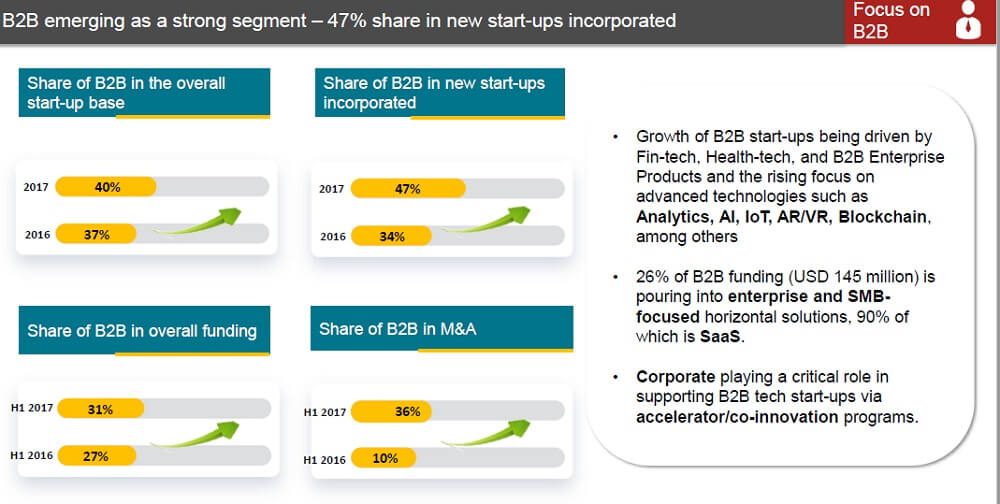 Meanwhile fintech startups grew by 31% Year-on-Year (YoY) to almost to 360 in 2017, with almost $200 Mn funding received in H1 of 2017, recording a growth of 135% since H1-2016. (As per Inc42 Datalabs, this figure is around $2Bn if one includes the outlier Paytm which alone snagged $1.4 Bn in funding from SoftBank). In the sector, sub-segments like digital payments and lending are maturing, while wealth management and insur-tech emerging as growth areas. Almost 33% of fintech funding was towards advanced technologies such as Artificial Intelligence and Analytics.

Similarly, witnessing a 28% YoY growth in 2017, the number of healthtech startups grew to an estimated total base of 320 startups. The sector garnered a total funding of $160 Mn in H1 of 2017, up by 129% since H1 of 2016. While areas like health information management, aggregator/ecommerce have continued to mature, areas like anomaly detection, disease monitoring, and tele-health/tele-medicine continued to emerge. Almost 31% of healthtech funding went towards Artificial Intelligence, IoT, and Analytics. 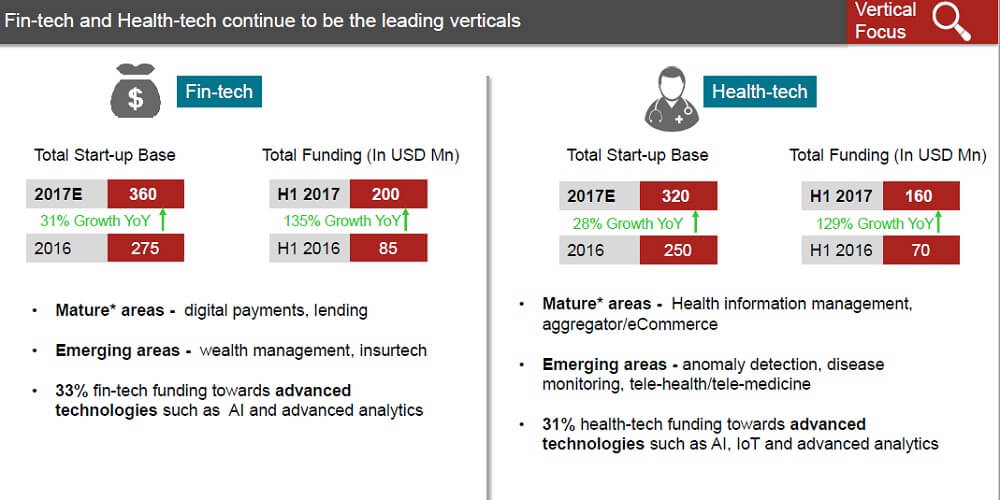 Meanwhile with over 60% startups, the B2C tech startup segment focused on creating innovative business models and taking the vertical approach, securing close to 70% of the overall tech startup funding in H1 of 2017. Leading vertical in the B2C segment are travel and hospitality, foodtech, fintech, and healthtech.

Growing at a five year CAGR of 30%, advanced tech startups focused on creating solutions in segments like Artificial Intelligence, Analytics, Augmented Reality / Virtual reality, Blockchain and Internet of Things were on the rise this year. The total base of advanced tech startups currently stands at 700+. Artificial Intelligence was the fastest growing at 75% while Blockchain is also starting to pick up growth. A rise was also noticed in startups that are catering to social challenges, almost rising 18% Y-o-Y to an estimated number of 325 in 2017. Top sub sectors among these were healthcare, education inclusion, and financial inclusion. 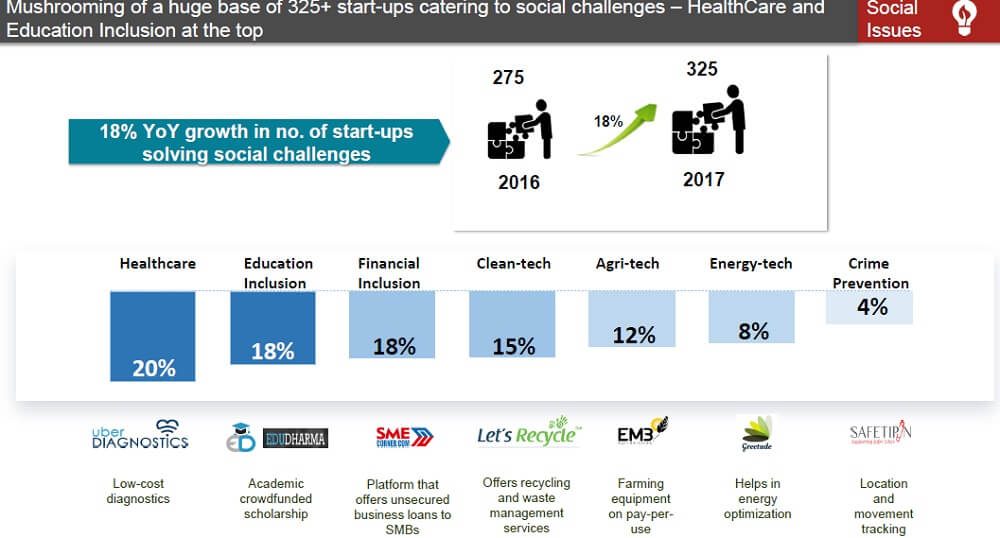 Rise In Unicorn Funding, M&As In the Indian Startup Ecosystem

Unicorn funding took center stage with big deals announced in the year with Indian unicorns in the B2C space continuing to garner global funds. 2017 saw rise in Unicorn funding led by Paytm and Flipkart. With a growth of 167%, the funding of entire Indian startup ecosystem (led by unicorns) amounted to $ 6.4 Bn in H1 of 2017. 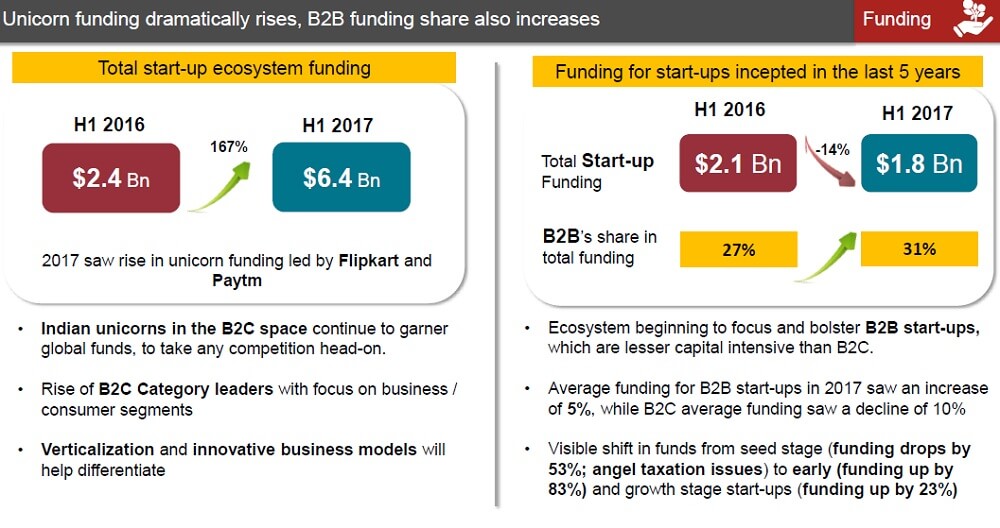 Meanwhile, the average funding for B2B tech startups in 2017 saw an increase of 5% while B2C tech startup average funding saw a decline of 10%. The ecosystem is beginning to focus and bolster B2B startups, thus leading to B2B’s share in total funding rise to 31%. 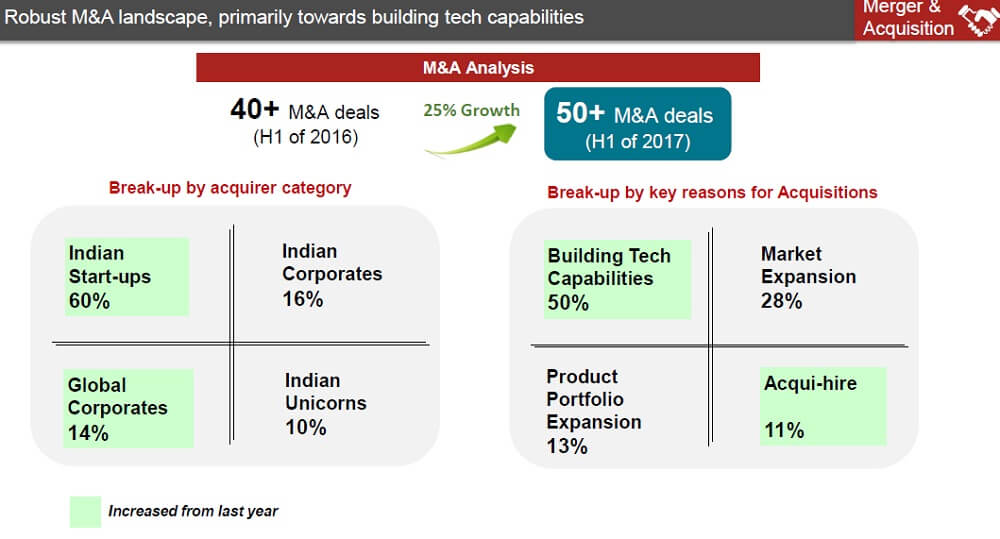 Meanwhile, the ecosystem has also seen the rising role of corporates in the startup ecosystem, with over 50+ corporates offering programs across acceleration, collaboration, and investments. Corporate accelerators grew by 30% Y-o-Y to over 20+. 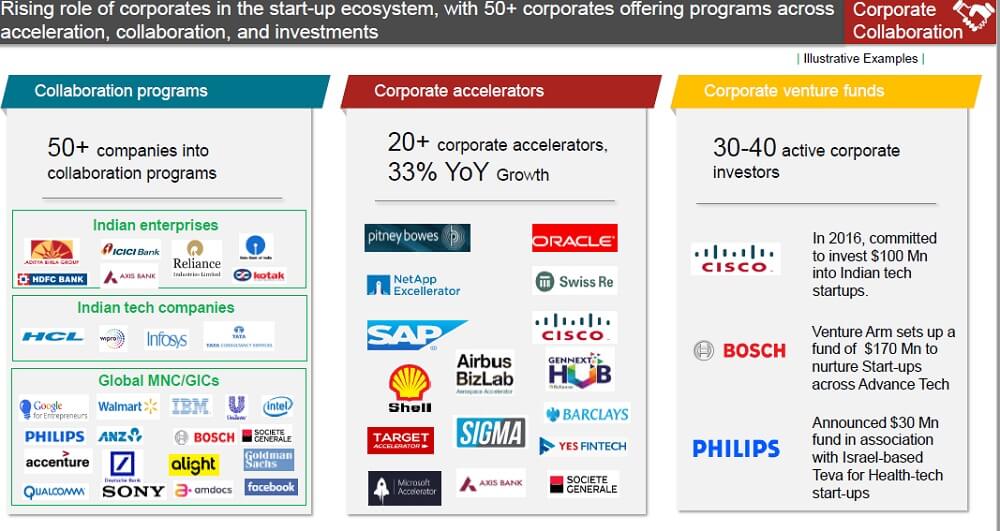 In conclusion, the NASSCOM Zinnov report stated that by continuing the ‘By India, For India, Of India’ movement, the Indian tech startups will continue to innovate enabled by technology and newer business models and will have a long-lasting impact in improving the Indian startup ecosystem. While the government needs to improve ease of doing business by minimising regulatory impediments, remove asymmetry in policies, provide access to government projects, and help secure early-stage funding, bodies like NASSCOM has to continue to catalyse and support deep tech startups and help build category leaders who can create solutions for India.