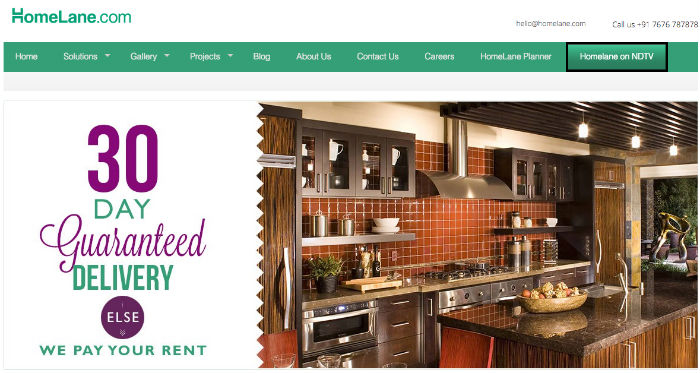 Last year, GrowthStory’s K Ganesh and Meena Ganesh had acquired Bangalore-based offline design firm Bello Interiors Pvt Ltd and rebranded it to HomeLane. The startup has Srikanth Iyer, ex-CEO of Pearson India and founder of Edurite as its CEO, and Rama Harinath, ex-senior management member at TutorVista as its co-founder.

HomeLane is an hybrid startup that supplies customizable kitchens, wardrobes and entertainment units. What sets it apart from other ecommerce players dealing in this space is that it focussed on the modular, fixed furniture that has an average billing value of INR 5 lakh upwards, and is not focussed on movable furniture.

Users can go to HomeLane.com and choose what they want, customise it as per the interest; its feature i.e. HomeLane Planner enables home-owners to accurately visualise their kitchen or bedroom. After finalising and submitting the design, HomeLane’s interior designers review and suggest changes.

The market for home set up in India is estimated to be growing at 20% CAGR and is already a $ 10 Bn per annum industry in the Top 10 Indian cities alone. Currently, the segment is being addressed by the unorganized sector comprising carpenters and brick-and-mortar furniture stores which is hugely labour-intensive, with overall quality standards being poor, and timelines which are flouted more often than not.

It is worth noting that, last year Ratan Tata had invested undisclosed amount in online furnishing startup UrbanLadder. Delhi-based FabFurnish is yet another player dealing in this space.

As per the company, it has witnessed sales grow at 100% month-on-month just six months after launching operations in Bangalore. According to Srikanth Iyer, CEO, of HomeLane the new fundraise would be used to expand in 10 cities over the next six months.

Further, HomeLane is looking to onboard 10,000 interior designers from around the country. “We would like to provide passionate designers the opportunity to work with HomeLane providing them part-time, work-from-home opportunities to augment their income,” Srikanth said.

Both K Ganesh and Meena Ganesh have been among the active angel investors in the country and has invested in startups including BookAdda.com, Bluestone.com, BigBasket.com, Overcart.com among others.