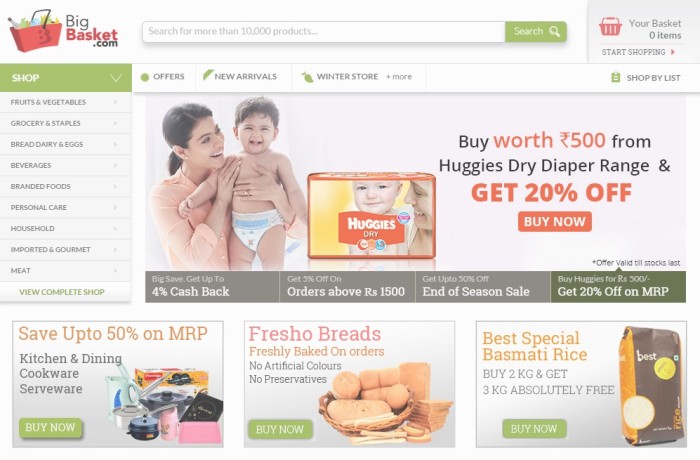 BigBasket, grocery etailer is in final talks to raise about $15-16 Mn (about INR 100 Cr) in a new round of funding to be led by Silicon Valley-based venture capital firm Bessemer Venture Partners. The new round will value BigBasket at around INR 1,400 Cr., says reports.

The company plans to use this fund in expanding its food service business to more cities.

An anonymous spokesperson from the venture capital firm said, “The deal is an extension of the previous round. Bessemer had committed to invest more in the company which sees the valuation of the company cross Rs1,400 Cr.”

BigBasket had raised a total of INR 278 Cr in funding last year, of which it had raised INR 200 Cr. from Helion Venture Partners and Zodius Capital in September 2014. Its other investors include LionRock Capital, Ascent Capital and serial entrepreneur K Ganesh’s startup factory GrowthStory.

Another person from Bessemer spoke that BigBasket has exceeded all revenue and growth targets. It needs to focus now on customer acquisition which makes it an attractive opportunity for new investors to invest in the company.

Bessemer Venture Partners has backed companies like Snapdeal and TaxiForSure in the country and Blue Apron in US.

BigBasket is India’s is one the largest online food and grocery store which operates in Bangalore. It has operations in Mumbai, Hyderabad and Pune and plans to grow in Delhi and Chennai. It handles more than 6,000 orders a day with Rs1500 per order on average, indicating annualized gross merchandise value (GMV) of about Rs200 Cr.

The company’s founders – VS Sudhakar, Hari Menon, Vipul Parekh, VS Ramesh and Abhinay Choudhari had started the venture in 2001 when they founded Fabmall. However, they soon turned it into an offline retail store chain, which was acquired by Aditya Birla Group in 2006.

Company’s nearest competitors include EkStop, LocalBanya and ZopNow who have not been able to expand beyond their single cities yet. While, the market is, according to food and consumer research firm IGD. Several brick-and-mortar retailers such as Aditya Birla Group, HyperCITY, Spencer’s, Reliance and Trent have been expanding in grocery etailing.